While school sports have clear policies and unified practices, the same is not true for the performing arts

Across Rhode Island, student-athletes have been living a relatively normal existence for most of 2021. Since the spring, they’ve been practicing together, riding buses together, high-fiving, …

While school sports have clear policies and unified practices, the same is not true for the performing arts 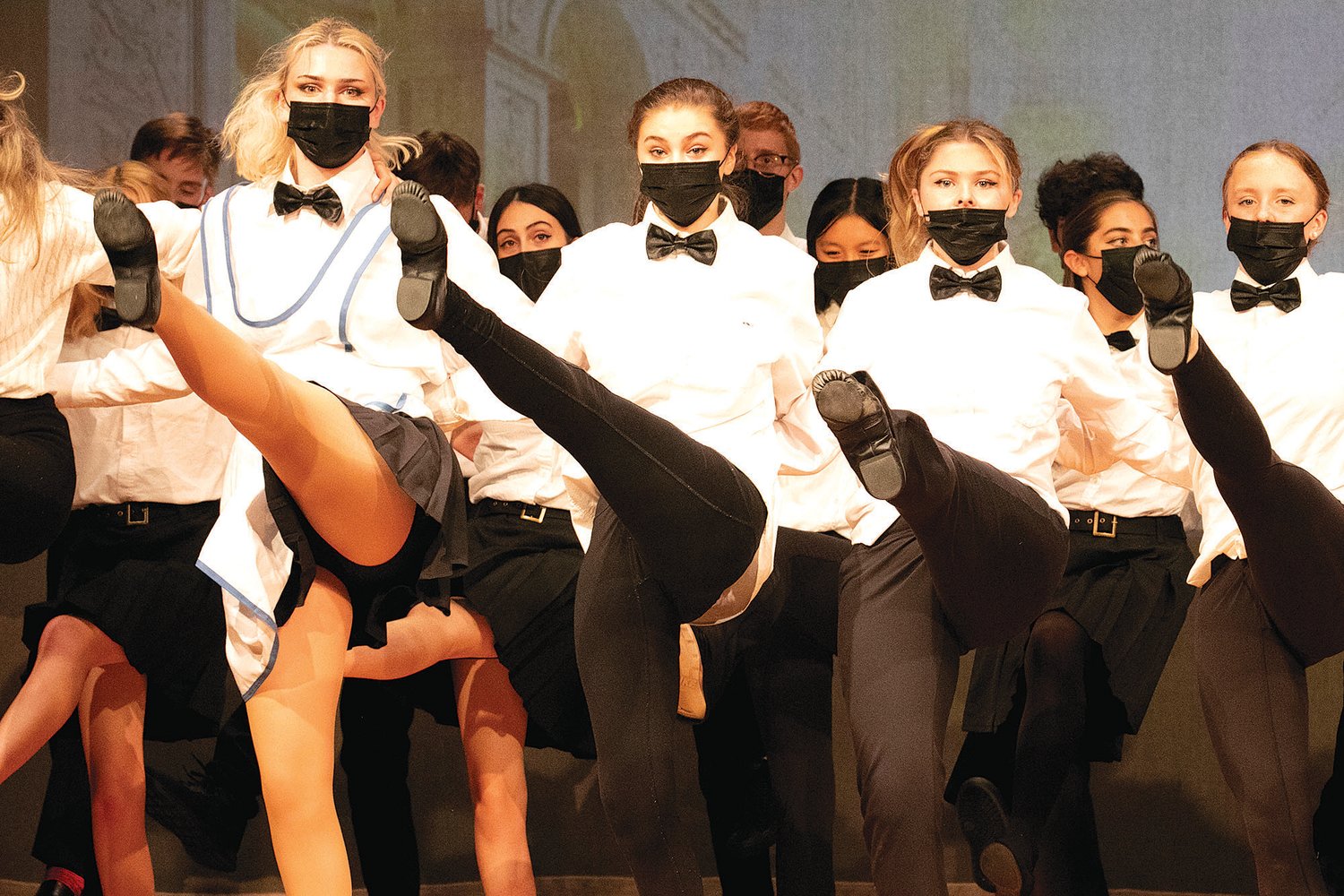 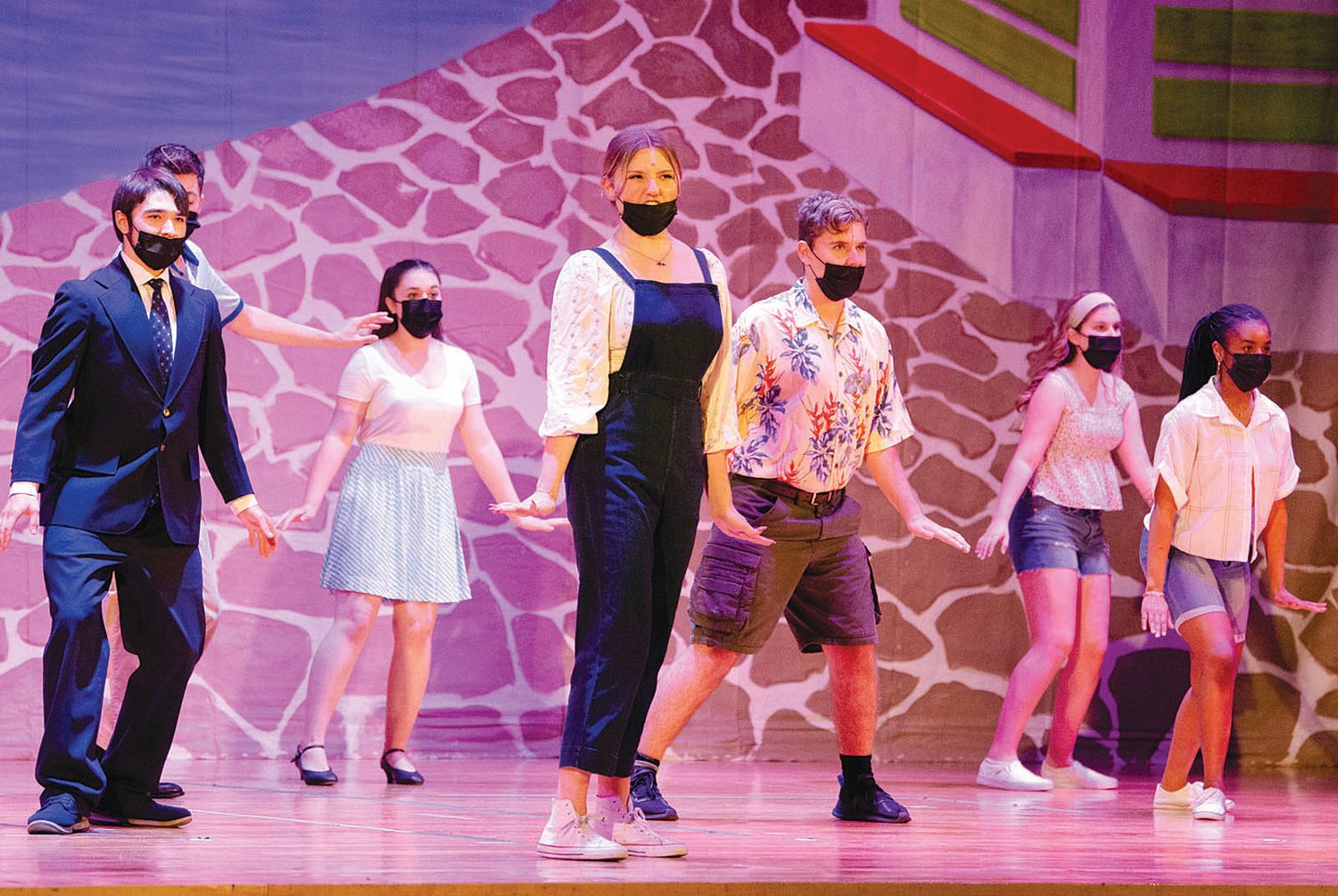 East Providence students perform a number from “Mama Mia!” last May. The high school resumed “normal” performing arts activities as soon as they were able to last school year and held their typical spring musical. Other schools are just beginning to open up their performing arts programs.
Richard W. Dionne Jr. 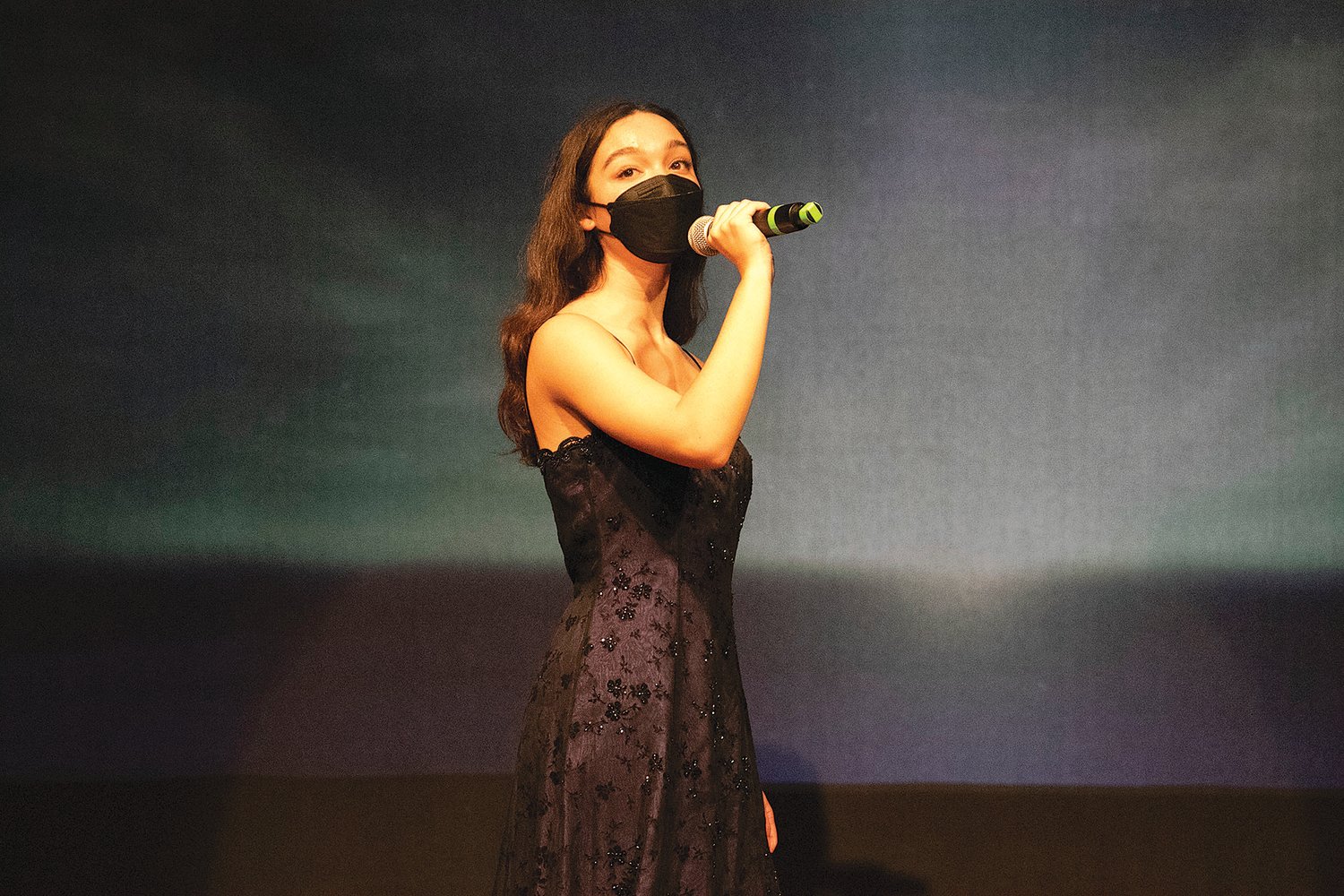 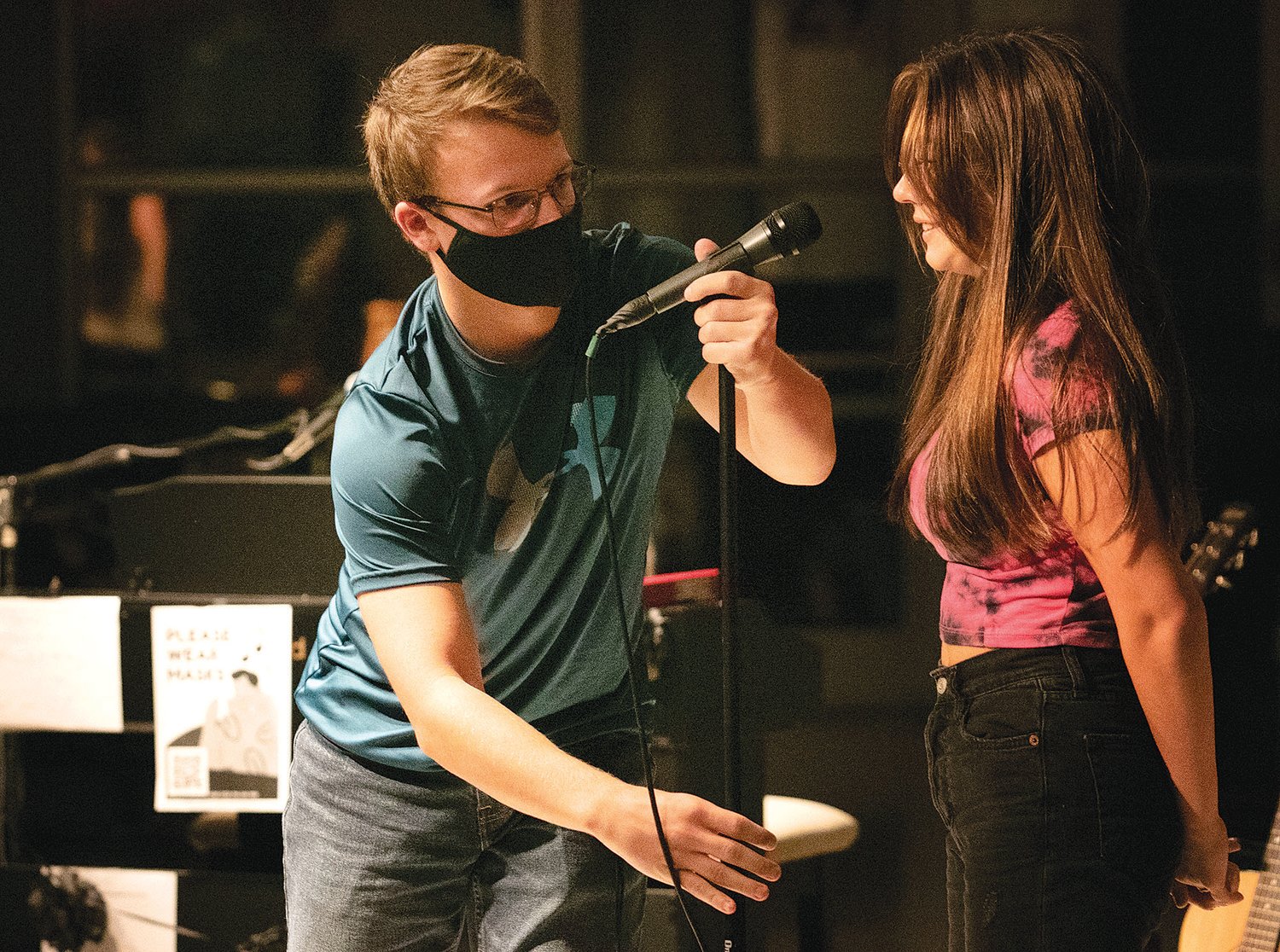 Emilia Brum waits for sound technician Jacob Perry to adjust the microphone during a an open-mic musical café, held in the Mt. Hope High School cafeteria last month. The café is organized and hosted by students.
Richard W. Dionne Jr. 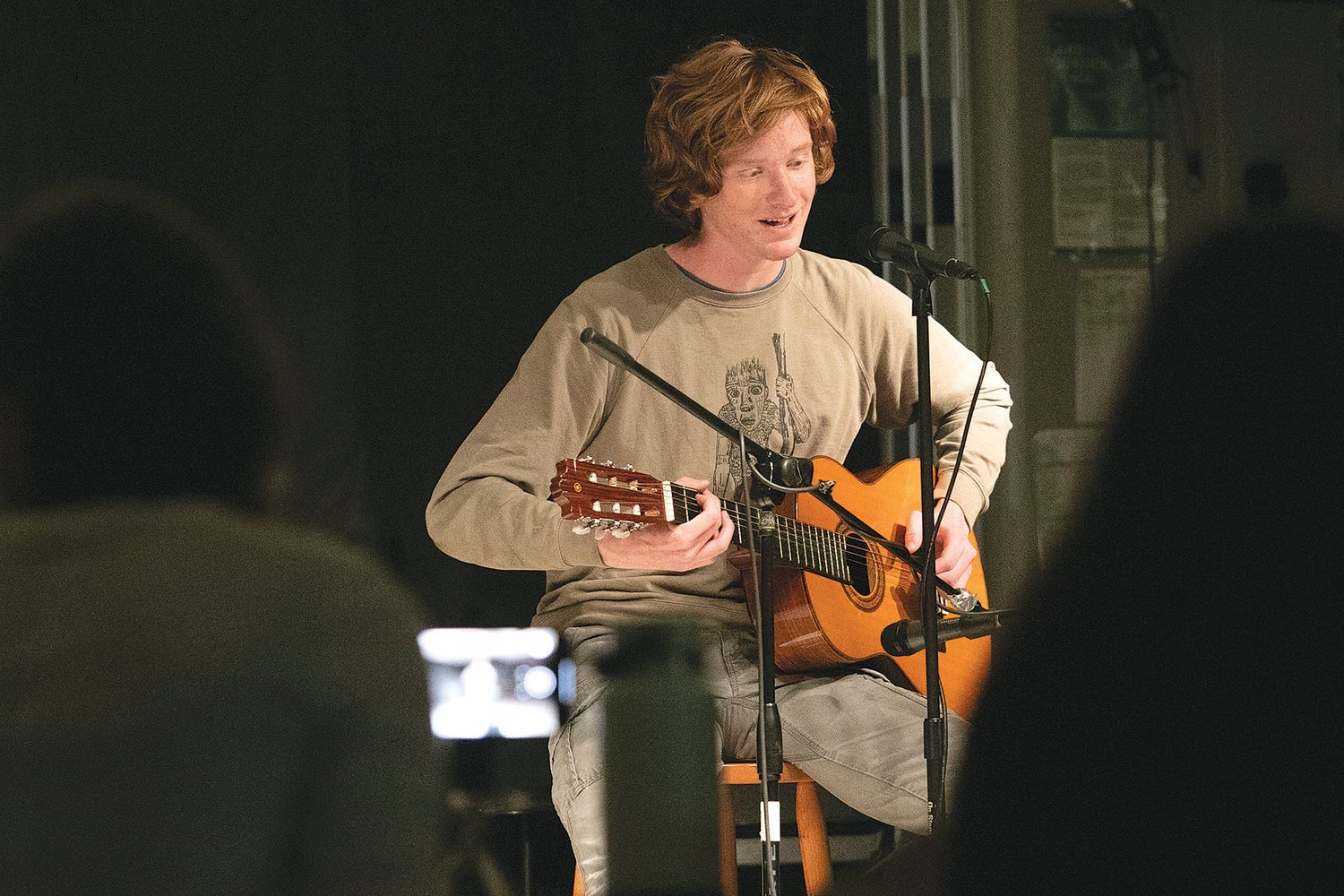 They’ve missed the camaraderie of singing with people who love singing as much as you do … They’ve missed the experience of what music brings to us, as humans.”
MaryAnn Lasorsa, East Providence High School Fine Arts Chair

Across Rhode Island, student-athletes have been living a relatively normal existence for most of 2021. Since the spring, they’ve been practicing together, riding buses together, high-fiving, hugging and winning or losing state championships, together. Aside from masks for the indoor athletes, everything about athletics is just like it used to be.

The same is not true for the singers and musicians, thespians, dancers and stage performers. Policies governing the performing arts vary district to district, sometimes even school to school. Some schools are back to hosting full concert performances; others have frozen their entire music programs.

The inconsistency traces back to a lack of clear guidance from the State of Rhode Island. While the current Rhode Island Department of Education (RIDE) Covid-19 “Playbook” includes 13 pages outlining safe protocols for athletics, it includes one page for all other “events.”

The athletes have an institutional advocate with massive clout. The Rhode Island Interscholastic League has been organizing high school and middle school sports for decades, has a full-time executive director and staff, and has been a partner with state decision-makers, advocating for a safe return to athletics.

Performing artists have no such representation. So while the Interscholastic League and the Rhode Island departments of health and education collaboratively released detailed protocols for all sports activities, there was no such collaboration for the performing arts.

The strongest advocate for the performing arts has been the Rhode Island Music Education Association (RIMEA), an organization aligned with the Rhode Island Philharmonic School that includes many of the music teachers throughout the state. Advocacy co-chair David Neves and others worked over the summer to create a set of protocols that would allow a safe return to the stage. According to Neves, the health and education departments reviewed their suggestions, supported their plan, and encouraged RIMEA to distribute the protocols to the state’s school districts. They did not, however, officially endorse them or include them in the state’s Playbook — which has become the Bible for most school decision-making, public or private.

Thus while all the athletes are playing from the same playbook, school districts are making their own decisions about what to allow — or not — on stage. Many have allowed a full return of all activities, all performances. Others are allowing their older students to perform, since high school students are largely vaccinated and allowed to move freely throughout their buildings, while barring their youngest students from singing or performing, since these students largely unvaccinated, restricted to stable pods and not allowed to mix and mingle throughout their buildings.

Several East Bay school districts seems to be close to “normal” with their performing arts programs. Vicky Boyle, Performing Arts department chair at Mt. Hope High School, is proud to say their students are doing everything they did two years ago. Their bands and vocal ensembles are performing in public. The marching band spent the season performing at football games. The high school will be hosting a full slate of indoor holiday concerts in a couple of weeks. Their guitar ensemble performed in a competition at the University of Rhode Island recently. And they’ve hosted two open-mic, student-run Musical Cafés in the high school cafeteria.

“We are absolutely back to normal,” Boyle said. “Our numbers are a lot lower because there was no band or chorus at the middle school last year, so we’re working very hard to build our programs back to the numbers we had pre-Covid.”

They are also mostly back to normal at Kickemuit Middle School, which serves students from both Bristol and Warren. Boyle said their band and chorus programs are back in operation after being shut down for more than a year, which is why they won’t be holding holiday concerts. Many of the musicians are so inexperienced, they need more time to be ready for the big stage. They expect to be ready by the spring.

Things are not so open at some of the lower grades. Boyle said she was working with Bob Hicks, who was interim superintendent of the Bristol Warren school district for a couple of months last summer, to implement a district-wide plan for music, but Hicks left, his interim replacement has now left, and the Bristol Warren district lacks a clear policy for all grade levels.

“It’s not consistent right now,” Boyle said. “There are some elementary schools where there is hesitation about singing.”

Gathering groups of kids to sing together in a chorus or play together in a band would be a violation of the “stable pod” concept that dominates elementary school programs this year. Boyle said, “We’re trying to get the word out that it’s ok to perform again. There is guidance for how to do it.”

It’s a similar story at East Providence High School, where the performing arts are moving full speed ahead. MaryAnn Lasorsa, Fine Arts department chair, said, “We’re doing all of the things that we did two years ago.” East Providence holiday concerts are planned for Dec. 2. Auditions for the spring musical, “Chicago,” will be held next month. The vocal ensembles and marching band are performing wherever they can.

Like Mt. Hope, however, the numbers are down. “This has definitely impacted our programs, in terms of numbers, for both band and chorus,” Lasorsa said.

Masks are ‘a bummer’

For the schools that have resumed normal activities, indoor masking is anything but normal. For many, it’s the sole reminder that things aren’t exactly as they used to be — and it’s a big reminder. In every school building throughout the state, everyone who is indoors (unless exempted) must wear a mask at all times. That includes singers.

“The mask is a real bummer,” Lasorsa said. She’s a glass-half-full person, and she’s thrilled to see the kids back performing again, but she can’t help but grumble mildly about the masks.

At Mt. Hope, Boyle talked about the masks and said, “Of course we have to wear the masks, which we all hate.”

Masks are not the only adaption for the performing arts. The RIMEA guidance suggests that indoor performances or rehearsals should be no longer than 50 minutes — if there is high-quality air flow and filtration. Shorter times are recommended in spaces without adequate air flow. So practices and rehearsals are shorter than they once were, with more breaks. Short skits are more palatable than full-length musicals.

Mt. Hope also innovated to create an entirely new stage for its theater performances last week. To create a more intimate experience for an audience trying to hear a play delivered by muffled actors, they created on-stage seating, with 40 to 50 spots available for each night’s performance.

Everyone interviewed for this story talked about two areas of loss in the performing arts. The first is pure and simple — participation. Without music, band or theater for nearly two years, there are fewer students participating in the arts than anytime in recent memory. The youngest students have not developed skills or interests that would lead them to join a middle school chorus or band. The middle school students have not experienced any musical endeavors that would lead them to join high school groups. There’s been an overall dearth of skill-building and participation.

“Look at our ninth-graders,” said Lasorsa of East Providence. “The middle schools did nothing last year for performance. No singing whatsoever. So the last time these students were singing was at the beginning of their seventh-grade year. They had basically two and a half months, then a little concert, and then everything got shut down. So it’s almost like they have not performed since they were in the sixth grade. And now they’re in front of me as ninth-graders.”

The second area of loss is human experience. The glass-half-full music teacher is worried about what these students have missed.

“The biggest loss is the social emotional learning aspect. When these students come together and perform, they build such strong connections as a community … They work together for the common good. It’s not a competition, and it touches the common joy of being human. For a lot of kids, music gives them a reason to come to school.”

Despite the obstacles and the worries, the music teachers are elated to see students singing and playing again, under whatever circumstances. “I’m happy that the kids are back. I’m glad we’re together,” Lasorsa of East Providence said.

The return toward normal was emotional for Vicky Boyle at Mt. Hope. “September was the first time we were all back in a room together, and when I walked in and heard the band playing it brought tears to my eyes,” she said.

“The kids are just so happy to be back on stage, and back in class, playing in person. When I attended our first music café, I remember hearing loud applause for the first time in two years. The kids were so into it, and I realized, the kids need this, too.”

Boyle added, “We’re all so happy. Getting the kids together again, hearing them sing, hearing them harmonize, it’s absolutely outstanding.”