EAST PROVIDENCE — As he indicated in recent weeks, Mayor Bob DaSilva has chosen Christopher Francesconi as Chief of the East Providence Police Department. Francesconi, most recently the Deputy … 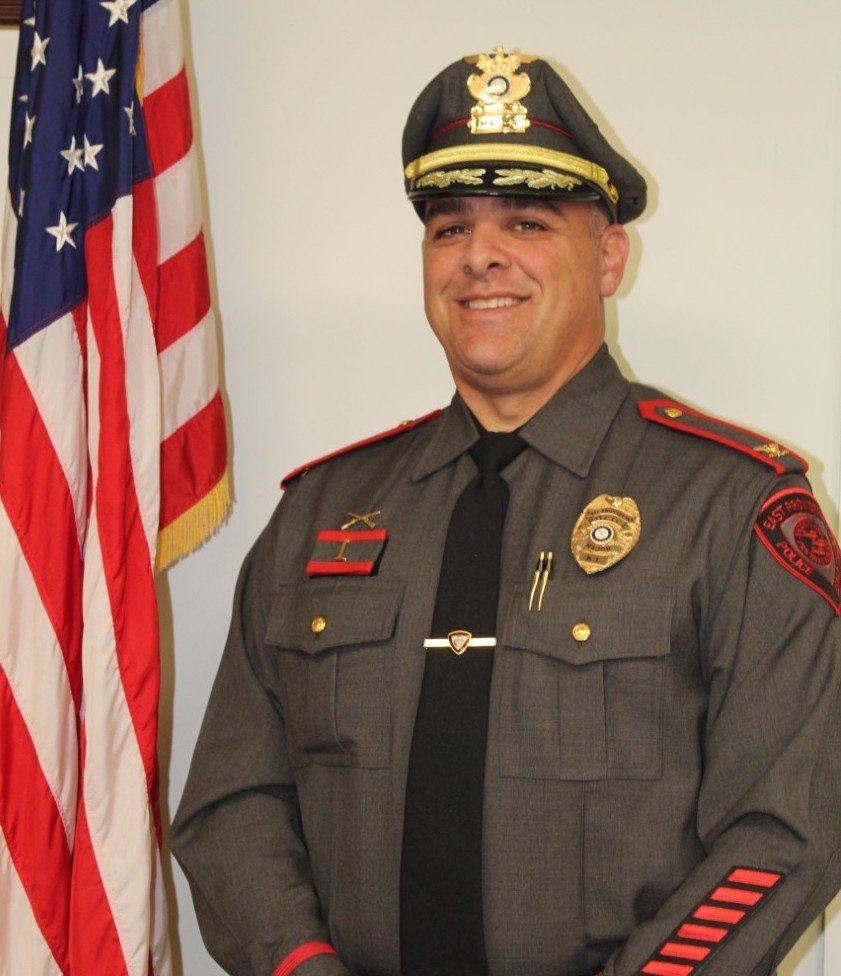 EAST PROVIDENCE — As he indicated in recent weeks, Mayor Bob DaSilva has chosen Christopher Francesconi as Chief of the East Providence Police Department. Francesconi, most recently the Deputy Chief to William Nebus and with the rank of Major, was appointed and sworn into the position by DaSilva on Monday, Oct. 25.

“It is truly a tremendous honor to be selected as the 15th Chief of Police in the long and rich history of the East Providence Police Department,” Francesconi said. “The men and women of this agency are some of the finest law enforcement officers in the region.

“I look forward to leading them as we seek out new and innovative ways to consistently deliver the very best police service to the East Providence community. I will work tirelessly to keep our community as safe as possible and maintain the strong bond my predecessors worked so hard to build with our citizens.”

Nebus stepped away as chief in recent weeks, ending his near three-year tenure in the position which began in early 2019. Francesconi was promoted to Deputy Chief in May of that year. The search for a new Deputy Chief has commenced. DaSilva has solicited interested parties from within the department to apply for the position.

“I have had the opportunity to work Chief Francesconi over the last three years and am impressed by his leadership and long list of goals he has for this Police Department, which is why I could not be happier to announce that I have appointed him as Chief of the East Providence Police Department,” DaSilva said.

Francesconi has been a member of the East Providence Police Department since 2000, rising through the ranks
in both the Patrol and Services Divisions. He was promoted to serve as an investigator in the Department’s Vice Unit in 2004 where he remained until 2009. He was then named Team Leader of the Department’s Special Reaction Team in 2010, where he served in that capacity until 2017. Francesconi next became a Sergeant in the Patrol Division and Sergeant of the Office of Professional Standards in 2010 then promoted to Lieutenant in 2014 and Captain in 2016. He later served as Captain of the Patrol Division where he remained until 2019.

In addition to his duties with the EPPD, Francesconi serves on the Mayor’s Community Advisory Board, a board that was created in an effort to bring varying racial and ethnic backgrounds with differing views together.

Francesconi earned his Master of Science in Administration of Justice and Homeland Security from Salve Regina University and a Bachelor of Science in Criminal Justice from Saint Anselm College.

Francesconi offered up the following as his immediate goals upon becoming chief:
• Accreditation - the attainment of RIPAC accreditation is an absolute priority.  This will bring us in line with the 31 other law enforcement entities in Rhode Island that are currently state accredited.  This will further assist us in adhering to industry acknowledged best practices and further allow us to deliver modern and professional law enforcement services to our community.
• Recruitment and retainment - aggressively seek out a variety of methods to increase our recruitment and retainment in an effort to bolster the ranks of the agency.  Instill an agency wide culture that each and every member is a recruiter.  Take steps to streamline the hiring process as much as possible, including faster turnaround times on the written exam results, in-house training of out of state lateral candidates and compact timelines.  We will look to establish a footprint in East Providence High School to build interest in policing, such as a First Responders Club.
• Body Cams - our agreement with Axon is complete.  We will closely monitor the state funding process and timeline so that B.C.'s can be implemented without delay.
• Further Community Outreach - in addition to efforts we already undertake, I would like to involve our agency in a program like Bigs in Blue https://www.bbbs.org/bigs-in-blue/ , Shop With a Cop (currently being planned), monthly Coffee with a Cop and encourage more organic interaction of our members with community during day-to-day operations
• Improve morale through the following - make simple station improvements including removing and replacing very outdated pictures hanging on walls, provide uniform identification along with ID and badge holders, continue to allow and encourage varied training opportunities, etc.