Turkey is the enduring symbol of the Thanksgiving holiday for many families across America, yet there may be nothing traditional about preparing this year’s holiday feast. At a time when many … 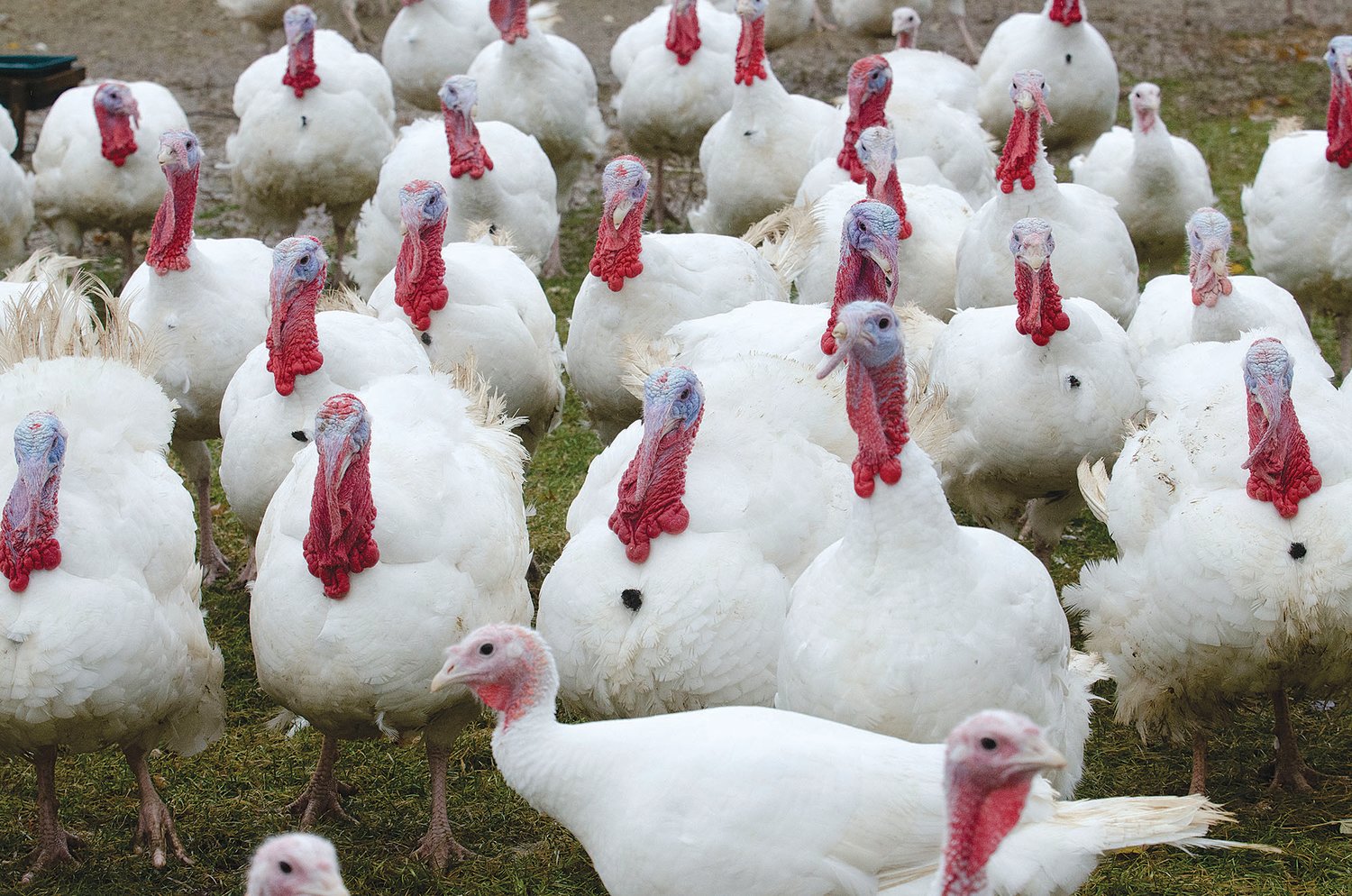 With reports of supply chain problems and potential turkey shortages in stores throughout the country, the phones started ringing early at Belwing Farm in Seekonk, which had sold nearly its entire stock of turkeys a few weeks before the big holiday.
Richard W. Dionne Jr. 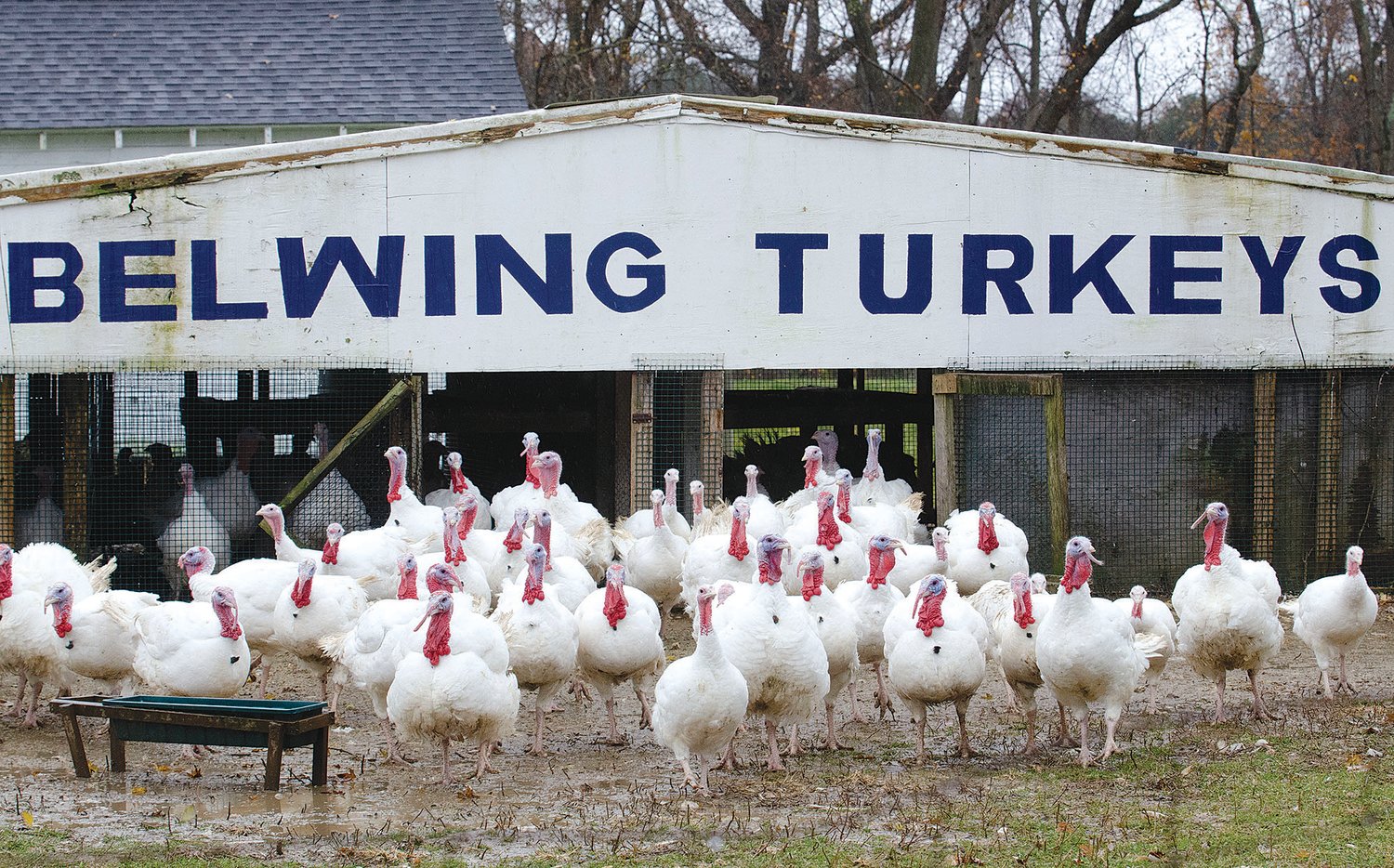 The turkeys at Belwing Farm in Seekonk are more expensive than ever this year, with the costs for feed and labor on the rise.
Richard W. Dionne Jr.
Previous Next
Posted Thursday, November 18, 2021 6:29 pm
By Kristen Ray

Turkey is the enduring symbol of the Thanksgiving holiday for many families across America, yet there may be nothing traditional about preparing this year’s holiday feast. At a time when many families are getting together again Covid interrupted their 2020 holidays, they do so as prices rise and supplies decline for Thanksgiving staples all over the country.

In an October article, the New York Times reported that nearly every ingredient that goes into a typical Thanksgiving feast – including turkey – will cost more this holiday season. Whole frozen birds cost 25 cents more per pound compared to a year ago, and market analysts predict that prices per pound could surpass the record Department of Agriculture benchmark for the poultry bird — $1.36, set in 2015 — by the end of 2021.

Farms and markets here in New England are not immune from this trend. Belwing Turkey Farm in Seekonk posted on Facebook that turkeys will be more expensive this year. Glenn Place, co-owner of Tom’s Market in Tiverton, Warren and Coventry, disclosed that their turkeys are up 70 cents per pound from last year – and that’s with the company gobbling up some of the price increase.

Lees Market in Westport, Mass., and Clements’ Market in Portsmouth, owned by the same company, are working to offset some of the costs and keep prices fairly consistent to previous years, marketing and communications manager Matt Ponte said.

All costs are rising

Part of the problem, said Roslyn Dickens – whose parents founded Belwing 77 years ago – might be that everything going into raising a turkey has become more expensive, particularly the cost of grain and labor. Profit margins are growing slimmer, causing some farms, Dickens guesses, to call it quits.

“I guess people are raising fewer turkeys, I don’t know,” she said. “They’re dropping like flies.”

Meanwhile, Glenn Place of Tom’s Market expects that labor shortages are contributing to the nationwide phenomenon. There are fewer people helping to process birds, and those who are left can’t be subjected to overworking conditions.

“There’s a lot of moving parts in that processing line,” Place said.

According to Ponte, at Lees and Clements’ Market there are “industry-wide disturbances” in a number of different areas, such as production and transit.

“A combination of factors that sort of impacted the turkey industry as well,” he said. So the turkeys are out there, but they’re not necessarily where they need to be — in the stores.

As word began to spread through the media that turkeys may be both pricier and tougher to come by, people began placing their orders for the poultry bird earlier than usual – much earlier. Dickens said people began requesting turkeys the first week of October; now, with less than two weeks still left before the holiday, Belwing is nearly sold out.

Though it’s not uncommon for Lees Market to start getting orders early in October – they sell more than 1,000 during the season – Ponte said things were a little different this year; more than 50 orders came in “right out of the gate.” Clements’ also had more than 20 orders within the first week.

Tom’s Market started taking orders around the third week of October, once they had an idea about the available inventory – not that people didn’t try to put their names in earlier.

Not only were people ordering much earlier, but what they were ordering differed too. Last year, many holiday gatherings were limited, and people ordered smaller birds to accommodate.

Not this year, as Thanksgiving gatherings begin their return to (almost) normal.

“This year, everyone wants to get the biggest turkey they have,” Place said.

That poses a problem, Place said, considering that manufacturers were unable to guarantee any turkeys larger than 24 pounds, at least right now; they won’t know if and how many there might be until about a week before Thanksgiving. Then there’s the fact that they were forced to group sizes of birds from two-pound increments to four-pound increments – meaning that somebody looking to get a 10-pound turkey could come away with a 14-pound turkey, and vice versa.

“There are a lot of decisions that need to be made on the consumer end this year that they haven’t had to do in the past,” he said.

Though Ponte said it was harder to secure larger turkeys this year, Lees and Clements’ were able to obtain a few, thanks to their meat department managers being proactive earlier this summer. They’ve also “built-up” such a pre-order business, he added, that they were largely able to match the needs of their repeat customers.

Tom’s is also committed to matching their customers’ needs as best they can, Place said, and he is confident that their distributor, Warwick Poultry, will come through in the end – even if it means that Place has to go pick up turkeys the morning before the big day.

And what about December … ?

Thanksgiving will likely be just “a precursor,” Place predicted, for what’s to come over the next month.