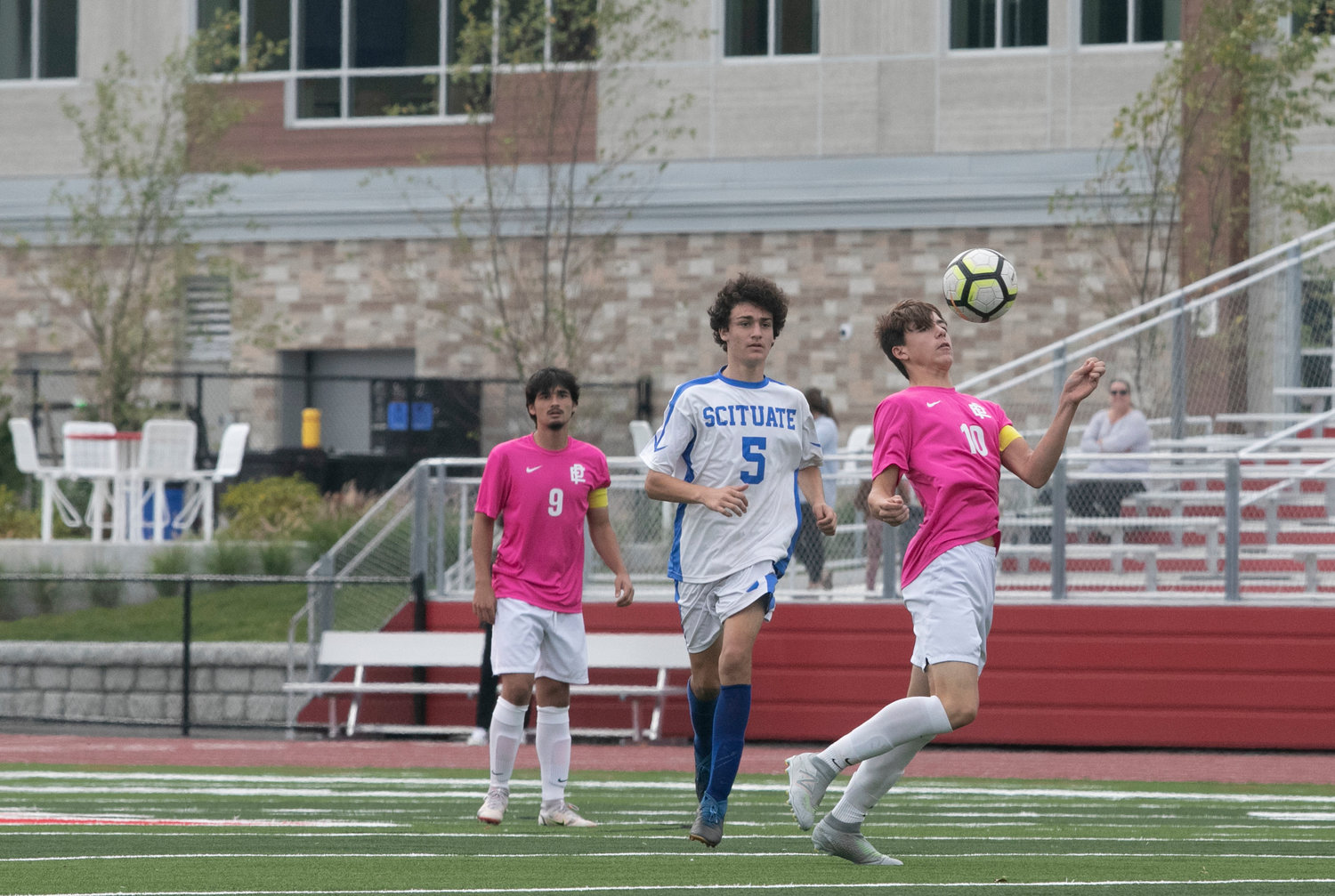 Brett Schwab chests a ball for the EPHS boys' soccer team in its non-league game last week against Scituate. The co-captain and his classmates were honored at intermission of the Senior Day contest.
Photos by Rich Dionne 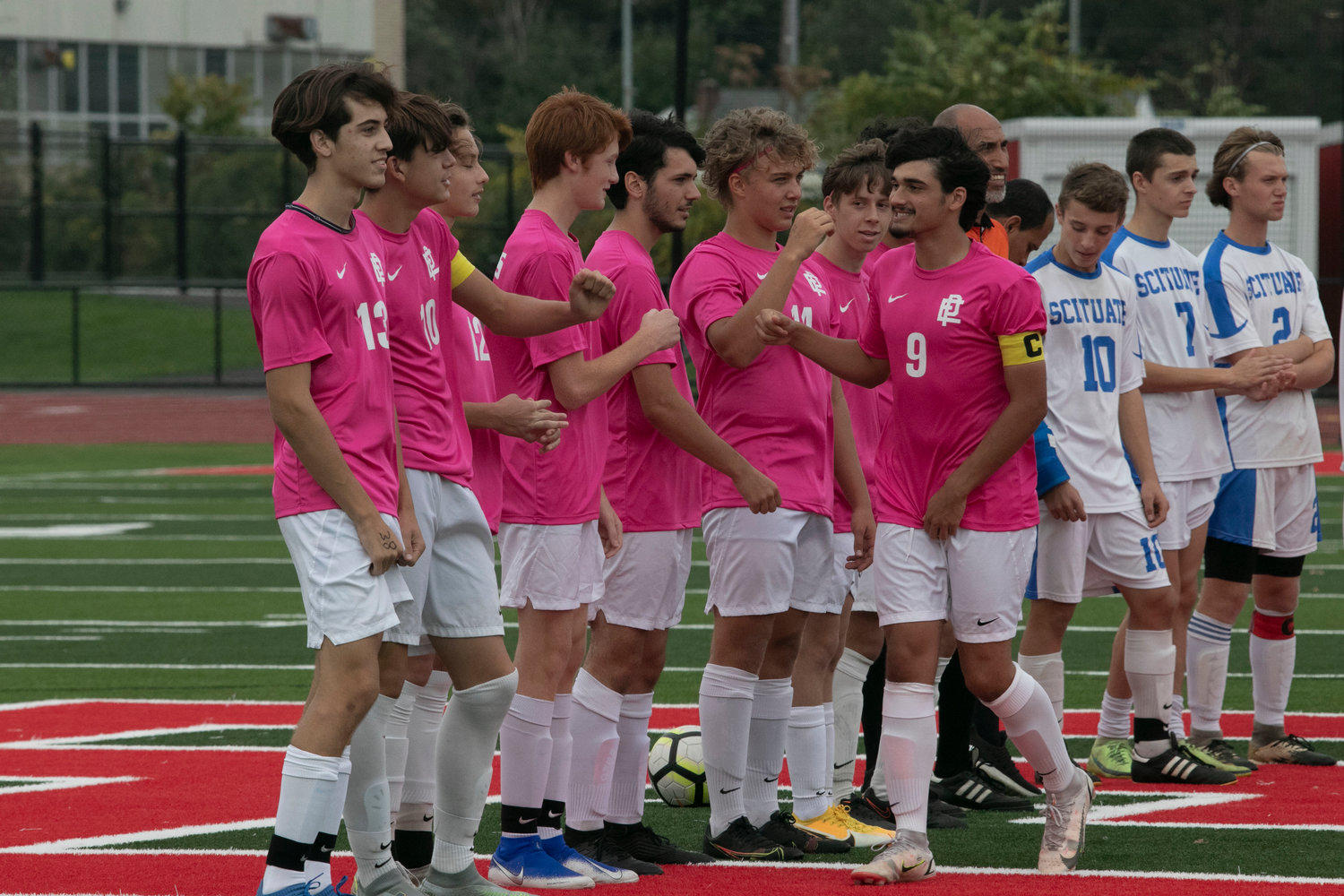 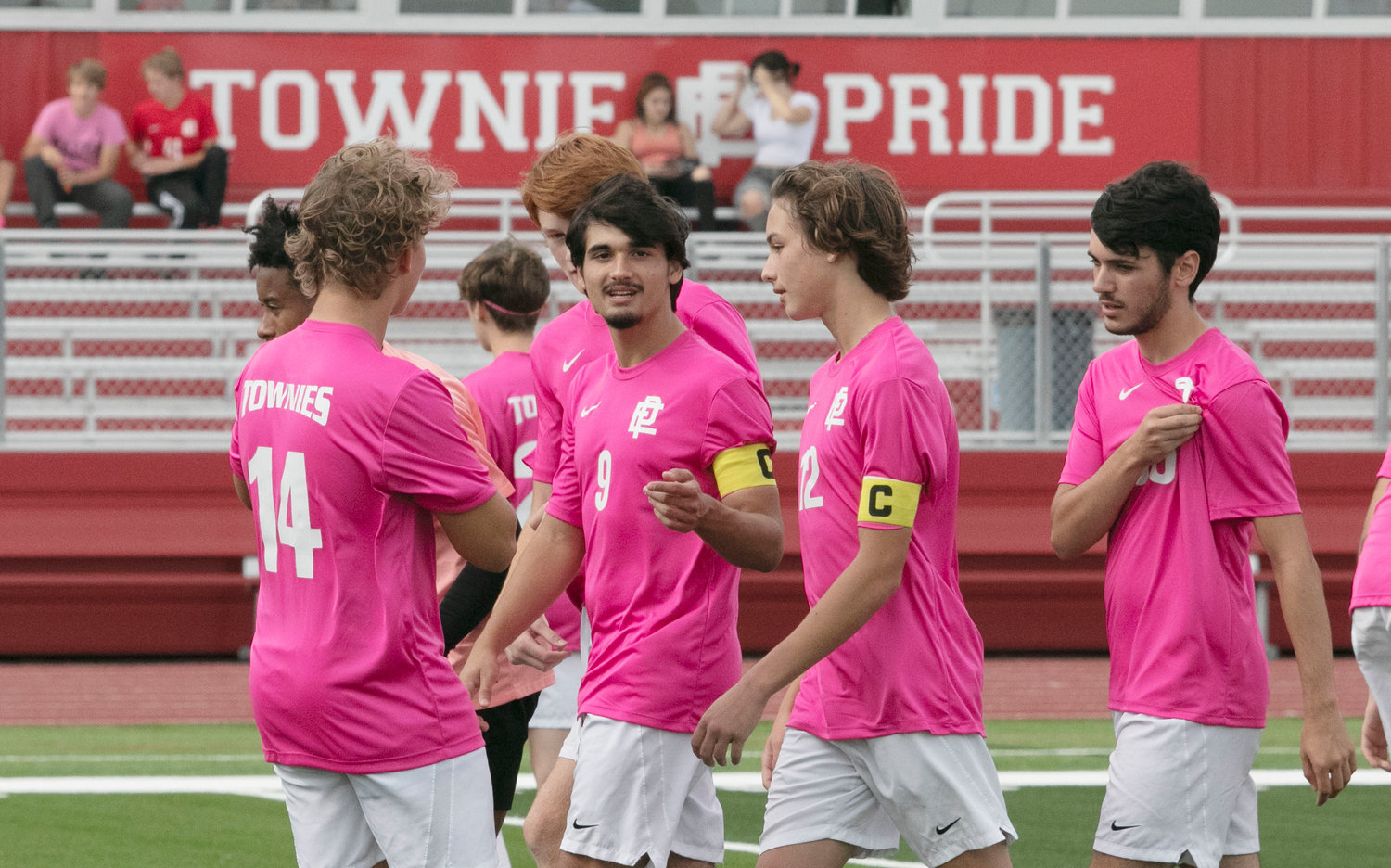 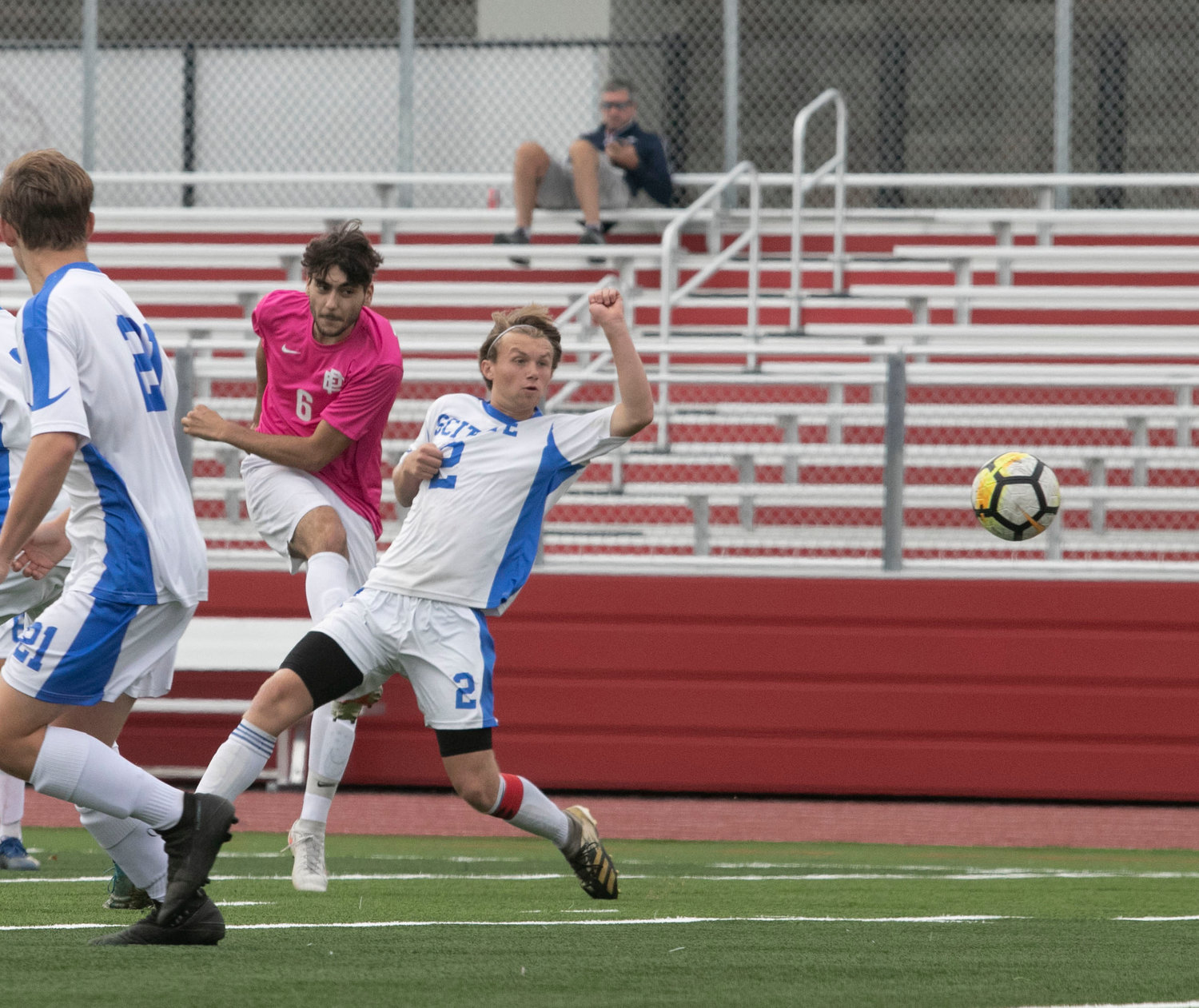 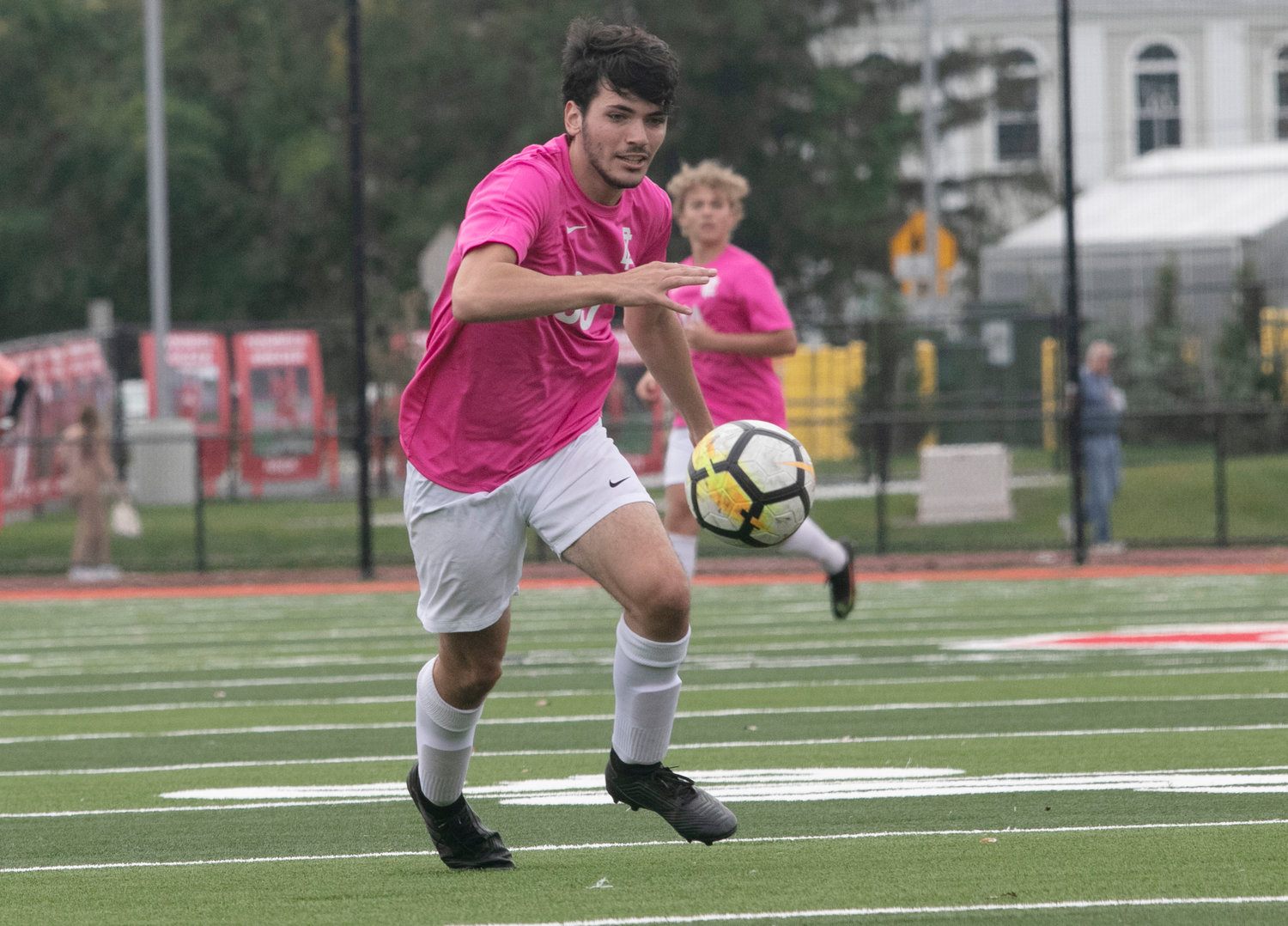 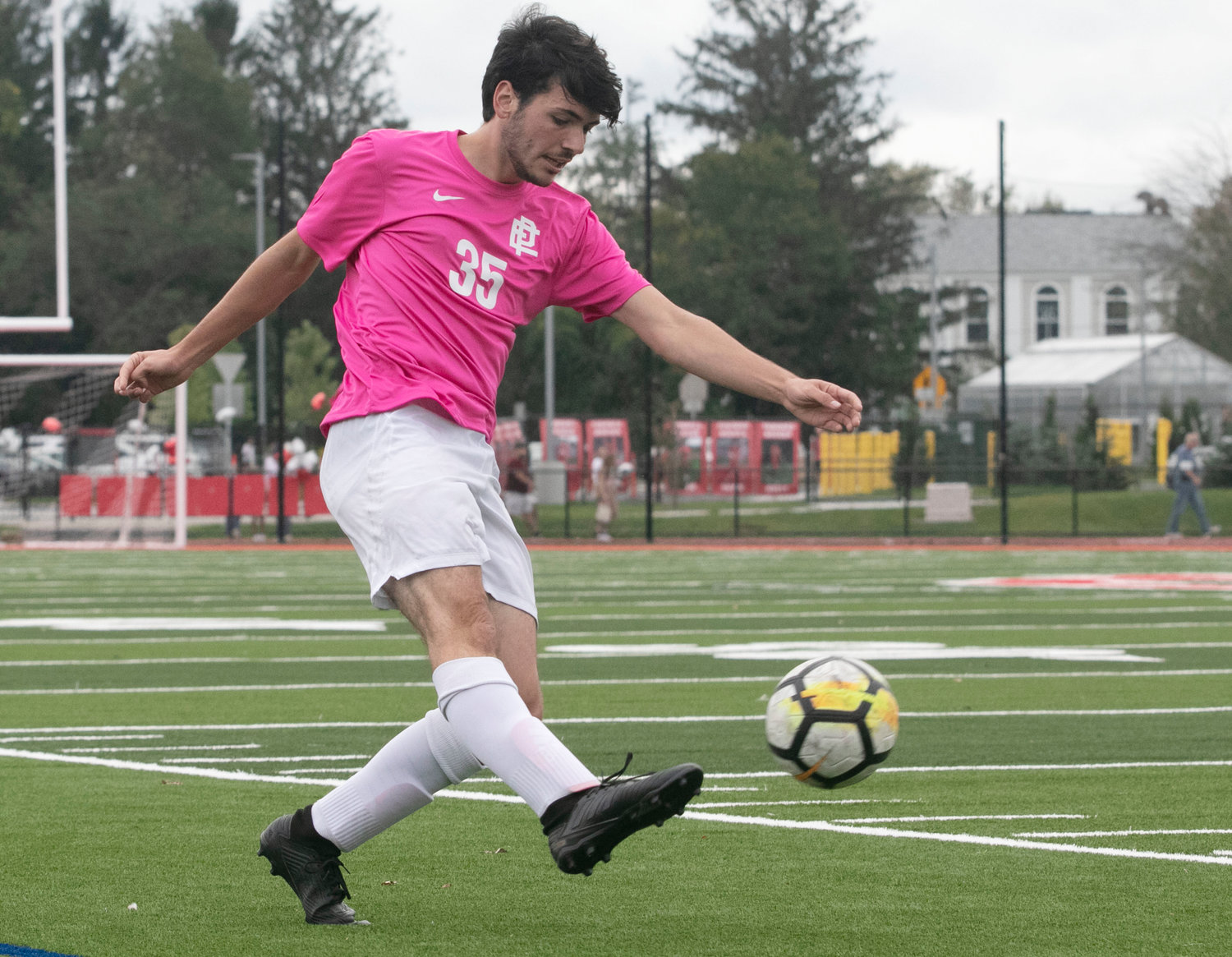 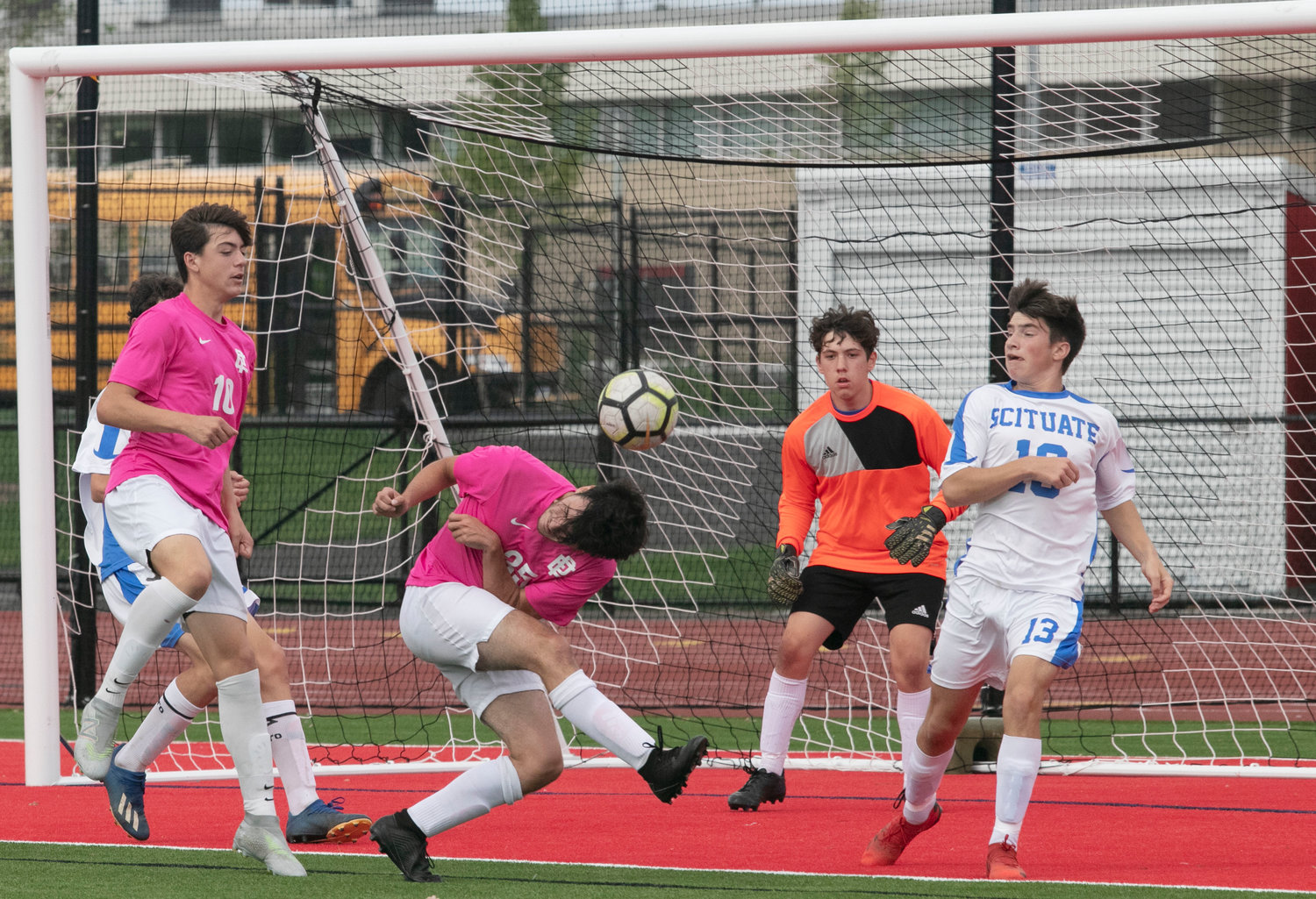 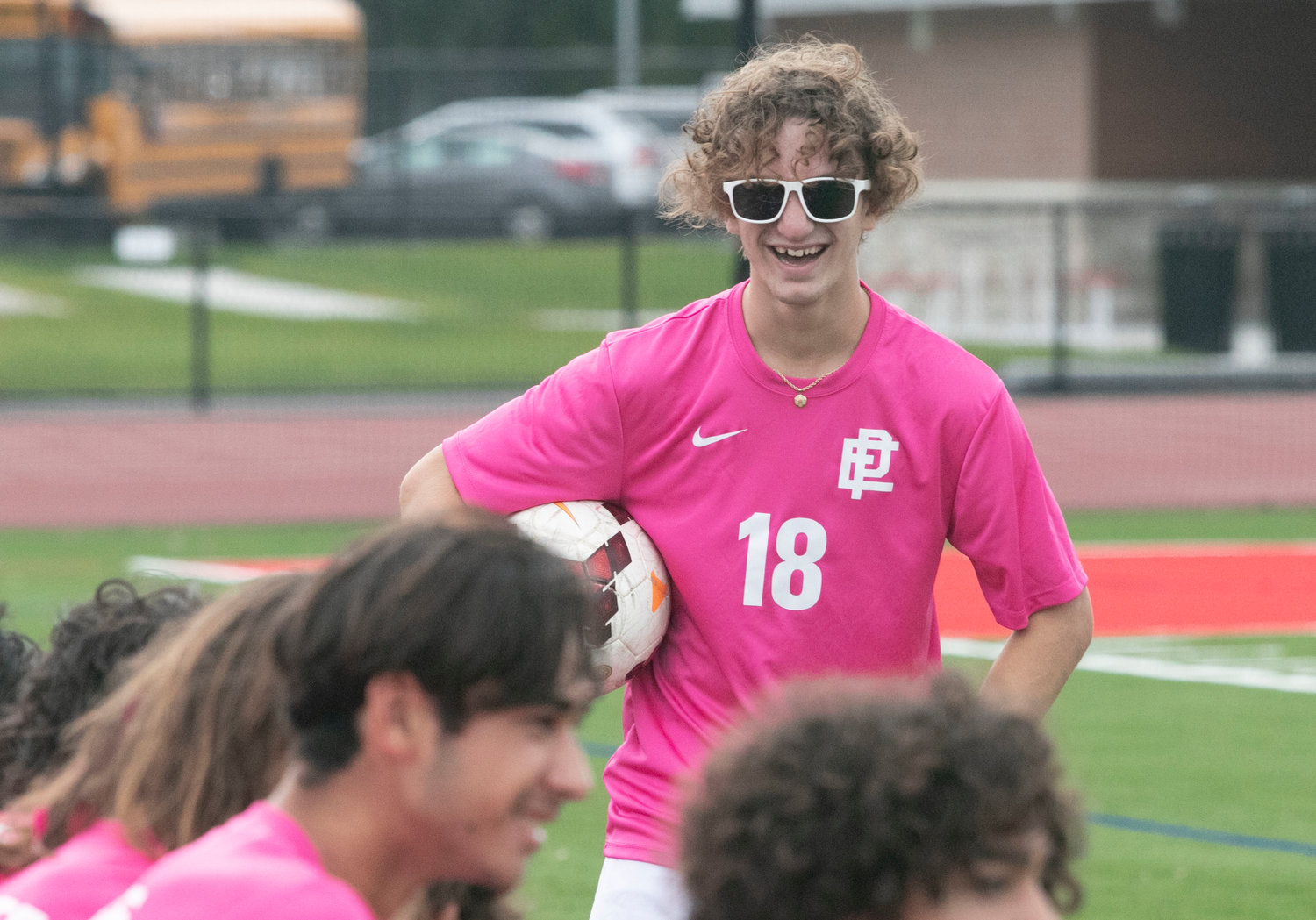 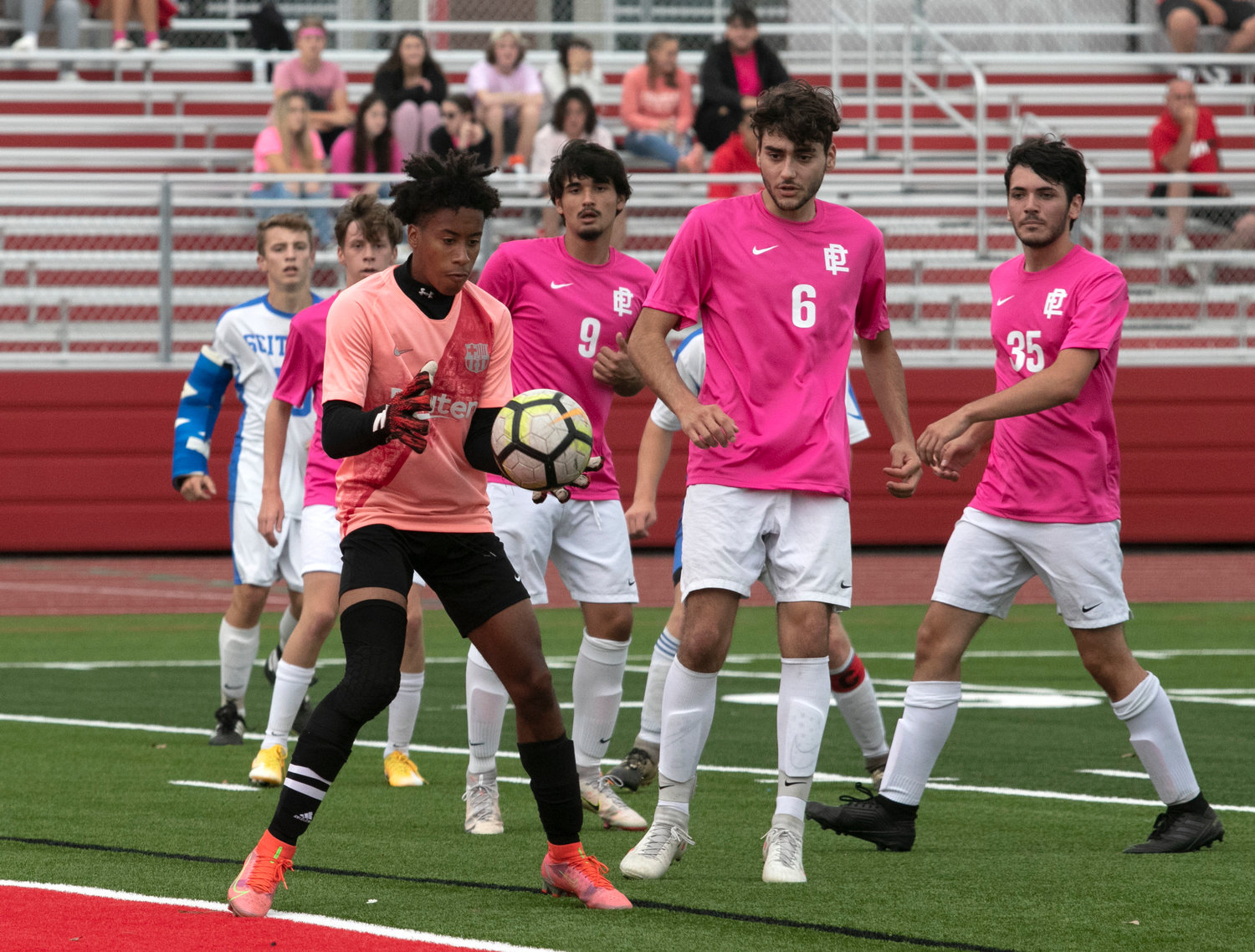 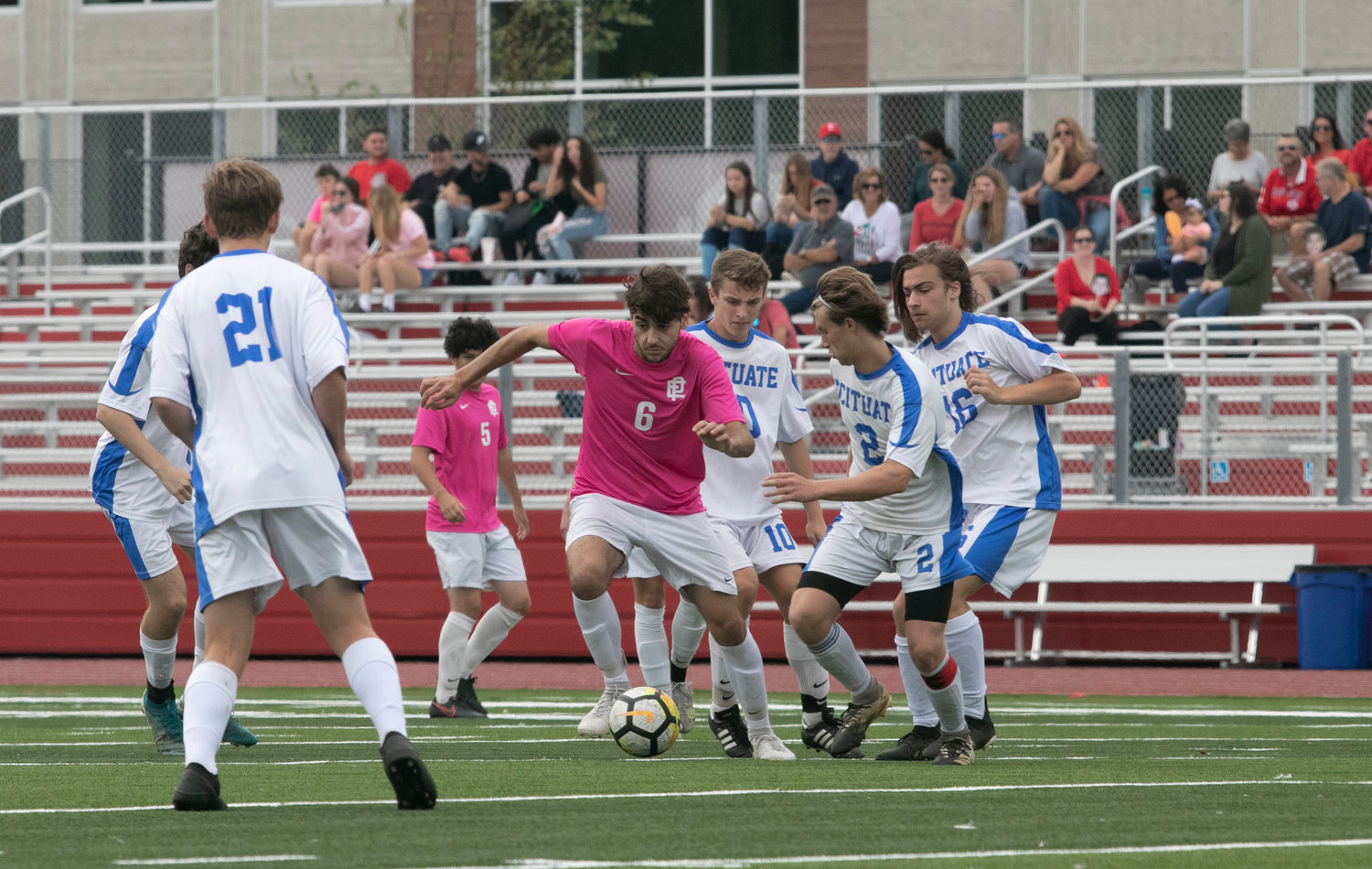 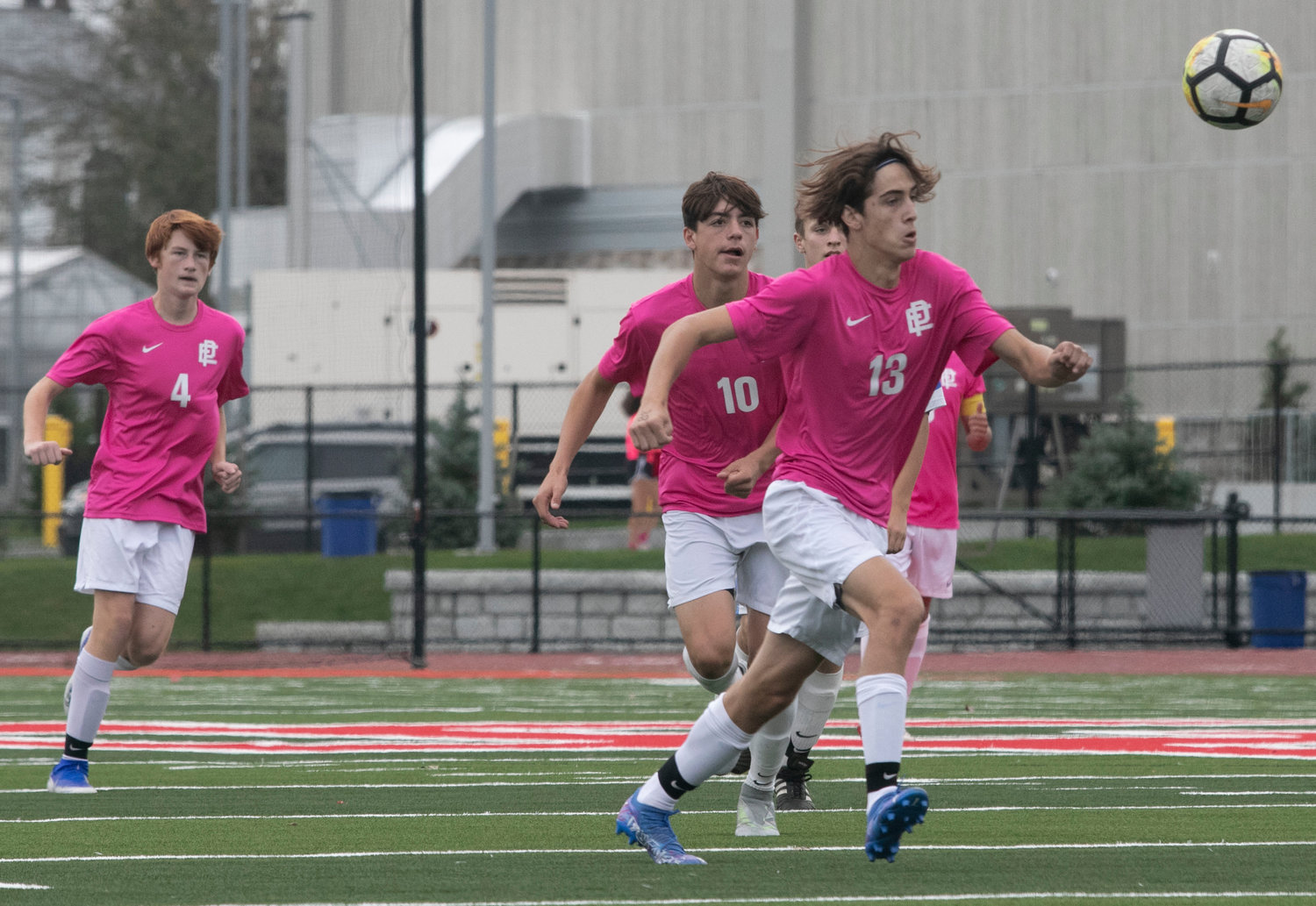 Jacob Barcellos, off an assist from R.J. DeCampos, netted the lone goal of the contest with 12 minutes left in the game and just as importantly allowed the Townies to secure the three points necessary in the league standings to clinch a playoff spot. EPHS improved to 5-3-5 with 20 points, two more than the minimum 18 required from regular season play to gain entry into the state tournament.

The Townies peppered the host Avengers net all evening, putting 10 shots on frame. At the other end of the pitch, Nick Bento made six saves as he and the EPHS recorded the clean sheet.

Standings update
With just three games remaining on its regular season schedule as last week began, the Townies knew they faced quality opponents after E.G. (8 points) in Wheeler (17 points) and rival LaSalle as they sought the minimum three points they needed to reach the playoffs.

The Townies head to Wheeler Friday night, Oct. 22, for a match against the Warriors at Wheeler School Farm in Seekonk at 6:30.

Girls’ Soccer
The EPHS girls’ soccer squad, already comfortably qualified into its upcoming championship tournament, kept pace with those at the top of the Division II table, starting last week with a 3-2 road win over host North Smithfield.

Ava Soares netted her first two goals of the season for the Townies. Olivia Williams assisted on each and added the other E.P. goal. Keeper Kaylee Davenport was credited with seven saves for the locals.

Soares garnered her brace as East Providence opened the scoring before the host Northwomen leveled the match one. Her second put the Townies back out in front, then Williams scored her goal off a direct kick to give the locals a bit of a cushion at 3-1 before North trimmed the lead later.

The Townies improved to 9-3-1 with 28 points in the league standings at the time.

EPHS next welcomes Burrillville for annual "Townie Pride" night at Pierce Stadium Friday night, Oct. 22. The parade begins at 6 p.m. and the non-league game between the hosts and the visiting Broncos kicks at 7.