LaSalle has won the last three Thanksgiving Day games against EPHS, and four of previous five

EAST PROVIDENCE — The revered Thanksgiving Day football contest between East Providence High School and LaSalle Academy returned the schedule in 2021, a year after the COVID-19 pandemic did …

LaSalle has won the last three Thanksgiving Day games against EPHS, and four of previous five 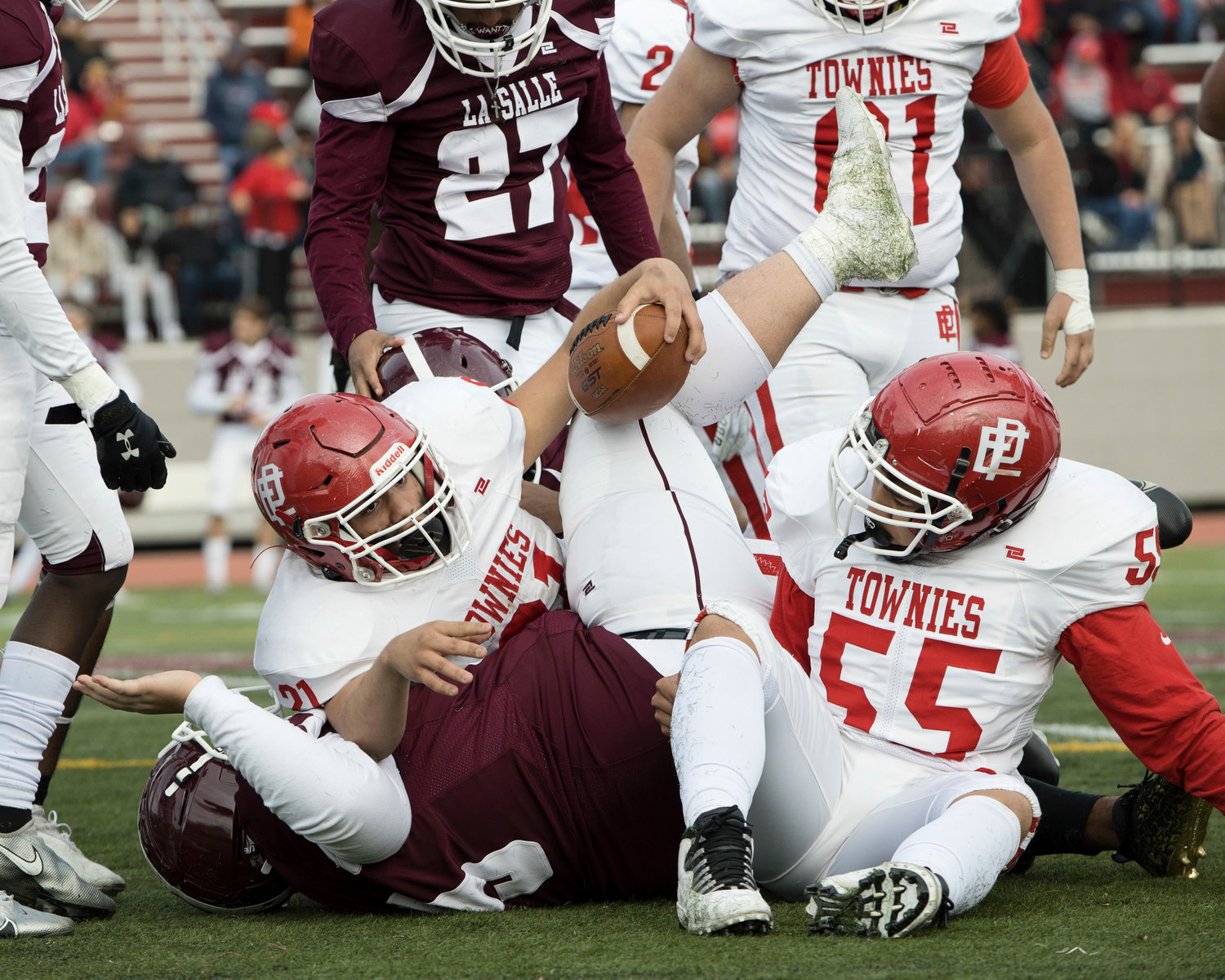 Steven Clark Jr. emerges from the pile wth the ball for EPHS in last year's Thanksgiving Day against LaSalle. Clark scored the only touchdown for the Townies in their 34-6 loss to rival Rams.
Photo by Julie Furtado
Posted Thursday, November 24, 2022 6:00 am
East Providence vs. LaSalle Thanksgiving Day football series

EAST PROVIDENCE — The revered Thanksgiving Day football contest between East Providence High School and LaSalle Academy returned the schedule in 2021, a year after the COVID-19 pandemic did something neither World War II, the Korean War, the Vietnam War nor any of the numerous other historic events over the past 90-plus year could not: force the cancellation of the game the previous fall.

And LaSalle return to its recent dominant ways over EPHS, claiming its third win in a row and four of the last five.

From the beginning of the 21st Century, in fact, the Rams have taken over control of the series. LaSalle has won 17 of the 21 Thanksgiving Day games played since 2000, including last fall.

LaSalle scored all of their points before East Providence was able to muster a touchdown drive in the second half. Back-up QB Trey Rezendes came into the game and proceeded to run for a pair of first downs. Senior Joel Arias then carried the Townies down to the one. Steven Clark Jr. did the rest, burrowing his way into the endzone.

The contest was the first Thanksgiving Day rivalry game with Jon Stringfellow serving as East Providence’s head coach. The scion of legendary Townie mentor Bill Stringfellow took over the program in 2020, the COVID cancelled year.

The visiting Rams did most of their damage through the air as quarterback Nate Lussier threw for three touchdowns. He also added a rushing score as did Alex Nuahn. The two TDs for the Townies, who trailed 13-7 at the break, were scored by seniors Juan Diaz and Carew Gomes, a pair of the 19 EPHS players who were honored while suiting up for their last high school game.

The contest was also the last on the sideline for Townies’ head coach Jay Monteiro, who retired from the position after the contest following six years guiding the EPHS program.

Friday night, Nov. 23, 2018, after the contest was delayed a day due to below normal frigid temperatures, host LaSalle rallied to defeat East Providence, 21-18, at the Rams’ Cimini Field in Providence.

LaSalle scored the opening touchdown and converted the point to take the lead at end of one quarter. The score remained 7-0 to intermission.

East Providence answered in the third quarter, scoring a pair of touchdowns, but failing on the points-after to set for a 12-7 advantage. The Rams then tacked on two more TDs in the fourth quarter while the Townies added one, giving the hosts the victory.

Dion Hazard accounted for two of East Providence’s scores, one on a seven-yard run and the other a 70-yard interception return. Exondus Barnes scored the other TD for the Townies.

East Providence scored a season high 41 points in what was a one-sided Thanksgiving Day victory over Super Bowl bound LaSalle Academy, November 23 at Pierce Memorial Stadium.
Running back Juan Diaz lead the charge for the Townies with three rushing scores in the 41-0 shutout.

With a meeting against Hendricken set for the following week in the Division I Super Bowl, LaSalle head coach Geoff Marcone opted not to play any of his starters, on offense or defense, in the game, which helped account for the one-side setback.

Playing the game on its campus in Providence for the first time in some 34 years, host LaSalle Academy rallied late to defeat East Providence, 35-32, to capture the 88th edition of the teams' Thanksgiving Day football rivalry Thursday morning, Nov. 24, 2017, at Cimini Stadium.

The upstart Townies, seeking their second consecutive win in the series after having dropped the previous eight outings, pushed the state championship game-bound Rams throughout. East Providence led 26-21 at the end of three periods before LaSalle came back to outscore the locals 14-6 in the final 12 minutes of action to increase its overall lead in the series to 14 games.

The Rams became the first of the sides to reach 50 wins in the longest continuous Thanksgiving Day rivalry between intra-state teams. LaSalle now leads the overall series, 50-36-2. The last time the teams played on the Rams' grounds in Providence was 1982 when the Townies won 20-7.