EAST PROVIDENCE — The East Providence High School boys’ basketball team let a 12-point second half lead slip away to Cumberland earlier this week in a Division I contest, the host … 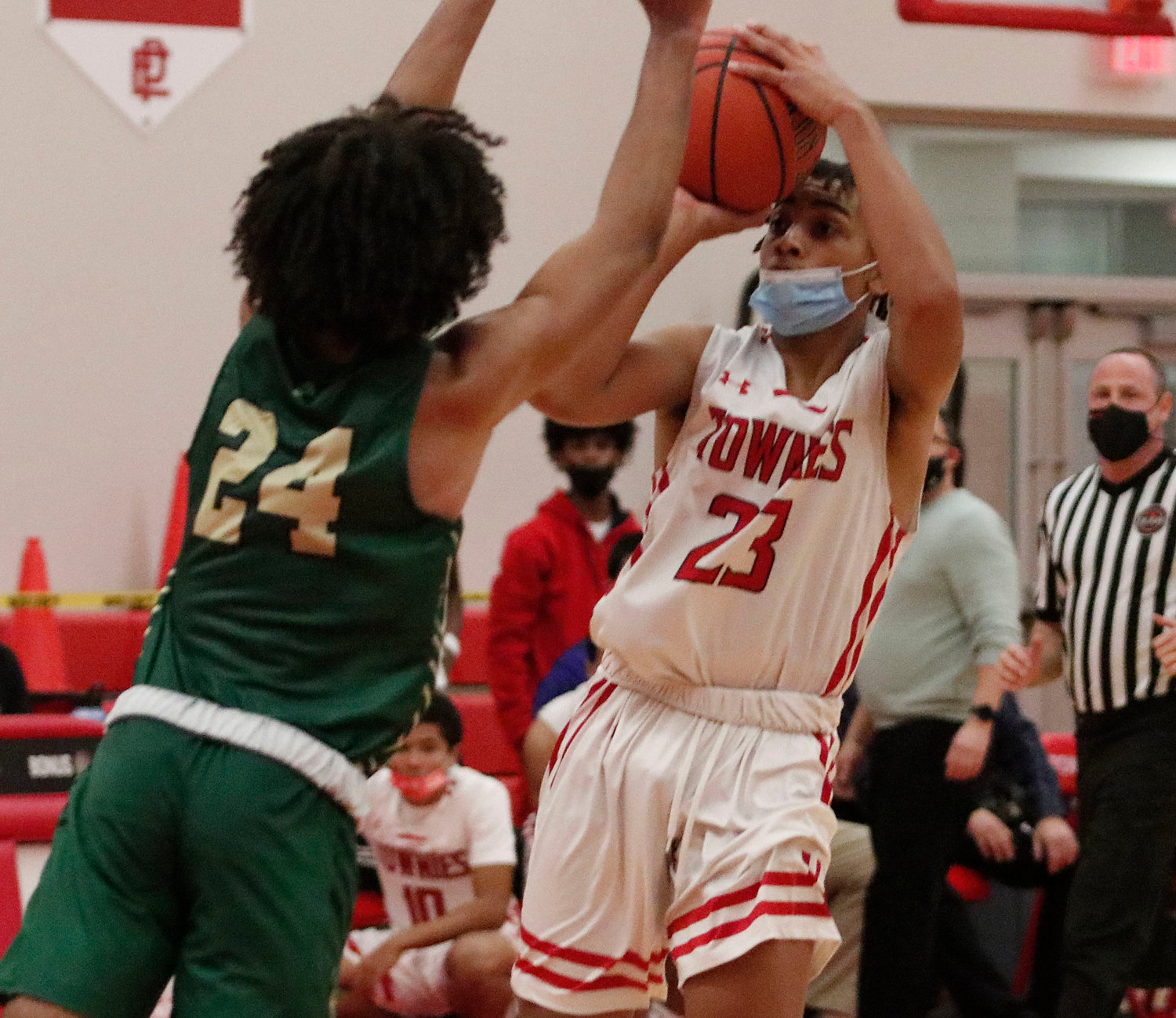 Xavier Hazard (right) scored in double digits for the East Providence High School boys' basketball team in each of the Townies' three most recent outings.
Photo by Rich Dionne
Posted Thursday, January 20, 2022 9:11 am

EAST PROVIDENCE — The East Providence High School boys’ basketball team let a 12-point second half lead slip away to Cumberland earlier this week in a Division I contest, the host Clippers rallying late to earn a 63-62 victory.

The Townies slipped to 2-3 in the league with the loss. Xavier Hazard led the locals with 20 points. East Providence actually trailed by a dozen early before answering with a spurt of its own to take a six point to intermission.

The contest remained tight throughout the second half. The Townies last led by one, 62-61, in the waning moments but was called for a foul with three seconds to go. The Clippers made both to earn the win. East Providence shot just two free throws of its own for the entire contest.

East Providence leveled its league record at 2-2 at the time as they closed out last week with a 73-56 win over visiting Cranston East on January 15, making up one of the games the Townies forced to postpone at the start of their schedule due to a coronavirus outbreak within the program.

The Townies raced to an 18-9 lead at the end of the first eight-minute quarter and never looked back. The locals eventually led 33-19 at the break.

Trey Rezendes led five E.P. players in double digits with a 16 points. Max Collins had 15. Kenaz Ochgwu and Jay Gonsalves each had a dozen and Xavier Hazard added 10.

The Townies took a break from Division I action with dominant non-league win over Ponaganset, defeating the Chieftains by the score of 61-39.

East Providence continues a busy stretch with another make-up of an earlier postponement when the locals travel to face rival LaSalle in Providence Thursday, Jan. 20. Tip time is 7 p.m. The next night, January 21, the Townies welcome North Kingstown to the new EPHS gym for a 6:30 p.m. start.

The locals start next week on the road, playing in Westerly Monday, Jan. 24, at 6:30 p.m. then in neighboring Barrington Wednesday night, Jan. 26, at 7 o’clock.

The torrid start to the 2021-22 season for the EPHS girls’ basketball team continued at the start of this week as the Townies remained unbeaten in Division II action with a one-side, 73-38 win over host Cumberland on MLK Jr. Day, Monday, Jan. 17.

East Providence continued to set the pace atop the league standings, improving to 9-0.

The Townies were scheduled to get back in D-II action Thursday night, Jan. 20, at home against Juanita Sanchez. Tip time is 7 p.m. EPHS travels to the East Side of Providence to face Moses Brown next Tuesday night, Jan. 25, then are back home for Mt. Hope two evenings later, January 27, to host Mt. Hope. Both games start at 6:30 p.m.

The EPHS boys’ indoor track and field team completed its 2021-22 Metropolitan Division regular season dual meet schedule over the last week with a pair of outings at the Providence Career and Tech Academy Fieldhouse. T

he Townies wound up with a 6-3 record following a split of its meet January 12 against Barrington and Juanita Sanchez, losing to the neighboring Eagles but beating the latter.

On MLK Jr. Day, EPHS defeated both Mt. Pleasant, 73-20, and Central, 56-35, to complete its schedule. Among the highlights for the locals in their split with Barrington and Sanchez sophomore Dylan Slavick won the high jump by clearing 5 feet, 8 inches. He was also second on the evening in the long jump, covering 18’5.5.”

Kameron Threatt was second for the Townies in the shotput, throwing 36’5.5.” Nick Morrison was also second overall in the 300 meters, clocking a time of 38.61 seconds. The EP 4x200 relay team of Morrison, Adam Marschat, Marcus Garedo and Justin Fiore were also second in 1:45.5.

“The team finished the dual meet portion of the season with a 6-3 record in what is arguably the toughest division in the state,” said EPHS head coach Bob Lyons. “I was pleasantly surprised with the strong turnout. We’ve had 31 individuals who have attended practice regularly, worked hard thus far and as a result improved each and every week. The realistic expectations going into the season were to finish with a winning dual meet record, accomplished, improve on times, heights, distances each week, also accomplished, and to qualify/score at the Rhode Island State Meet, which is to be determined.”

The EPHS girls’ indoor tracksters competed in their penultimate Sullivan Division dual meet of the 2021-22 season when the Townies beat both Hope and Mt. Pleasant but lost to North Smithfield at the PCTA Fieldhouse on January 11. The locals entered their final dual this week with a 5-3 overall record to date.

E.P. freshman Nazarae Phillip was tops overall in the 300, bettering the entire field with her time of 47.19. Phillip was also second best on the night in the 55 meter dash, clocking a meet winning time 8.05 Alaysia Royal, a senior from Johnston, ran a 7.91 to lead all sprinters on the evening.

Also, the Townies team of Phillip, Daniel, Isabel Tavares and Lili Schoenfelder won the 4x2 relay overall on the night in a time of 2:01.81. As well, the EPHS quartet of Katheren Diaz Araujo, Michelle Diaz Araujo, Gladys Barrera, and Emma Heatherton were second in the 4x400 with a time of 5:17.50.

The EPHS swim teams, because of weather and pandemic related stoppages, took part in just their second regular season dual meets of the 2021-22 season last week as the Townies met up with their male and female counterparts from Mt. Hope.

The Huskies, from Bristol and Warren, actually call the East Providence-based PODs Swim Center their home and they hosted the Townies on Wednesday, Jan. 12.

Nick Capobianco won a pair of individual events for the Townies in the boys’ outing, clocking a time of 2:28.55 in the 200 yard individual medley and a 1:08.61 in the 100 backstroke, the latter just about securing the overall meet win for EPHS as they led 37-27 at the time.

In the girls’ meet, Ines Benadouda accounted for East Providence’s lone victories. She claimed the 100 breaststroke in 1:24.4 and the 500 free in 6:54.55. Emma Leduc and Britney Carlson added second place swims for the Townies in the 50 and 100 frees, respectively.