EAST PROVIDENCE  — East Providence’s mask wearing mandate in municipal buildings will remain in effect through at least the middle of November after the City Council, somewhat … 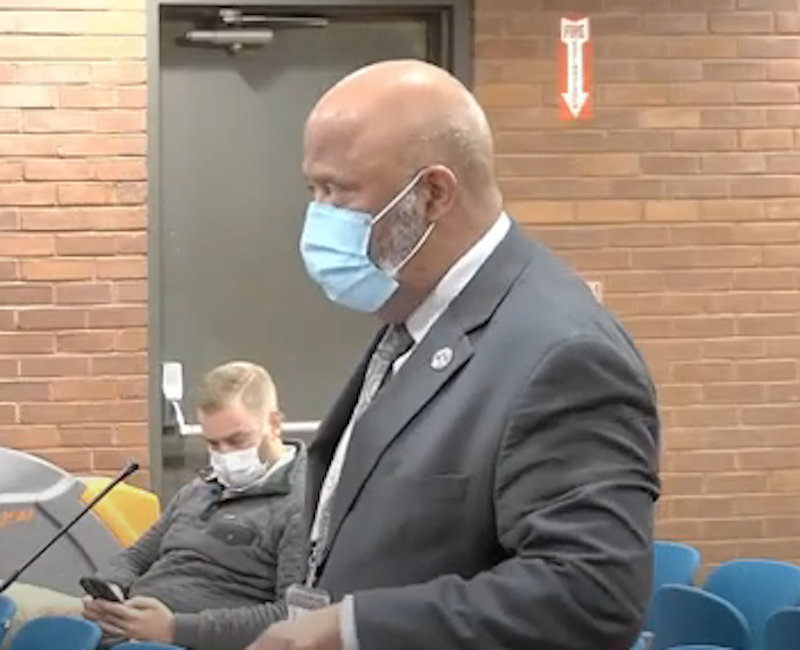 Director of Administration Napoleon Gonsalves wears a mask for a time, later discarding it to speak, during his remarks before the City Council at its October 19 meeting.
Posted Wednesday, October 20, 2021 11:34 am
Governor extends school mask mandate

Governor Dan McKee, on October 15, extended an executive order, which akin to one in city for municipal buildings, included a mandate for the use of masks in schools around the state.

The order remains in effect until at least November 13. A previous incarnation of the order issued at the start of the 2021-22 academic term last summer is already being challenged in the courts.

The data remains remarkably consistent to when the governor signed instituted the order in late August. Then, the state was averaging 310 positive COVID-19 cases per day and 1.1 deaths. As of last week, those numbers were 256 and 1.6, respectively.

EAST PROVIDENCE  — East Providence’s mask wearing mandate in municipal buildings will remain in effect through at least the middle of November after the City Council, somewhat begrudgingly at its October 19 meeting, approved the extension of an executive order including the matter issued by Mayor Bob DaSilva.

The item passed on a 3-2 vote. Councilors Bob Britto, Nate Cahoon and Bob Rodericks casting for the extension while Councilors Ricardo Mourato and Anna Sousa were against.

Britto, the council president, prefaced his vote by indicating he wouldn’t be amenable to approve a continuance in the future.

Gonsalves quoted national pandemic figures while explaining the administration’s rationale for including the mask mandate in the extension, saying the daily average around the country as of the meeting night was “90,000” new COVID-19 cases and “2,000” deaths per day associated with the virus.

In Rhode Island, for the week prior to the meeting there were 165 new cases reported. A total of 177,280 had contracted the virus for the 18-month duration of the pandemic and 2,867 had died from COVID-19. In East Providence for the same period, there have been 6,819 positive cases and 207 deaths.

He continued, “So it’s still a threat to our community and recently we had some outbreaks in some departments. And it’s spread by…there’s about 10 percent of the public that’s considered ‘super spreaders’ that spread it to the other 90 percent. So we think it’s still a clear sign. Things are heading in the right direction, but we’re still not safe in regards to it.”

The larger discussion was spurred on by remarks of a city employee, who is assigned to the senior center, during the public comments section of the meeting.

The employee, while saying he was not against vaccinations and had received the shots, said the mask mandate was contradictory and counterproductive. He also claimed wearing the mask had distressed both his physical and mental health.

Britto said he felt the employee raised
“some valid points.” He, as well, saw contradictions in large numbers of unmasked people gathering at professional baseball and football games and locally in restaurants and other establishments.

Gonsalves countered by noting the employee’s job at the senior center and that vaccines are not 100 percent preventative.

“There’s still the risk of exposure to our residents and our workers,” Gonsalves continued. “We had one department where it spread right through the department and it incapacitated us. That’s one of our concerns and to also protect the citizens when they come into city hall. It’s just lowering the risk. There’s no guarantee it’s going to prevent it, but we’re just trying to lower the risk for both our employees and also for the public.

“When COVID hits, it spreads. Like I said earlier of the people that have the virus, it gets spread by 10 percent of the people. So you only need like one of 10 people to come in here to be one of those ‘super spreaders,’ and it will spread throughout the building and shut us down. That’s one of the things we’re concerned with.”

Britto echoed the administration’s particular worry about impacting the city’s elderly residents, but said he would not be inclined to vote for any further extension of executive orders pertaining to mask requirements.

“I’ll vote for it this time, but going further, just to myself on record, that I most likely won’t be,” Britto added.

Said Gonsalves, “All we ask of you is to allow us to state our case if needed. Hopefully it won’t be needed, things will have improved enough that we don’t have to worry about it.

Cahoon presented a pragmatic argument while explaining why he would vote to approve the extension.

“I think we have to be careful when we conflate things happening inside with things happening outdoors,” he said, adding health experts “have been pretty up front about the fact there’s a big difference in transmission rates indoors versus outdoors.”

As for other municipalities, he said he’s found Providence, Central Falls, Pawtucket and Barrington all continue to have mask mandates in city/town buildings.

“And I understand when you are in a public building and you are serving the public you must serve all the public safely,” Cahoon continued. “And that includes people who are immunocompromised, people who cannot be vaccinated for one reason or another and those people need to be able to come into those spaces safely. They are taxpayers as well.”

Cahoon, like Britto, said his future vote would likely hinge on information at the time.

“This is a conversation we need to have on a month by month basis. We need to look at the data,” Cahoon added.

Sousa, a nurse by profession, said there should be a greater re-emphasis “on proper hand hygiene” like there was earlier in the pandemic. She urged for more washing with soap and water for 20 seconds instead of relying on alcohol based sanitizers.

She added, explaining her eventual vote against, by saying at this point in the pandemic and considering the vast number of those people who are vaccinated it should be up to the individual to decide if they need to wear a mask or not, an opinion Mourato shared while noting he was opposed to the extension also.

Gonsalves emphasized the administration’s opinion “masks will reduce the transmission” and some restrictions around the matter have already been relaxed. As of mid-October, if city employees are vaccinated they don’t have to wear masks among coworkers. If unvaccinated, however, there is still a requirement.

As for the wearing of the masks by all employees when they engage with the citizenry at municipal buildings, he said it was to “avoid confusing the public.”

The extension of the executive order is for 30 days. The council will take up it up again at its November 16 meeting.