EAST PROVIDENCE — In a match befitting the two best teams during the regular season, St. Mary Academy-Bay View edged cross-city rival East Providence High School by a 4-3 score for the 2022 … 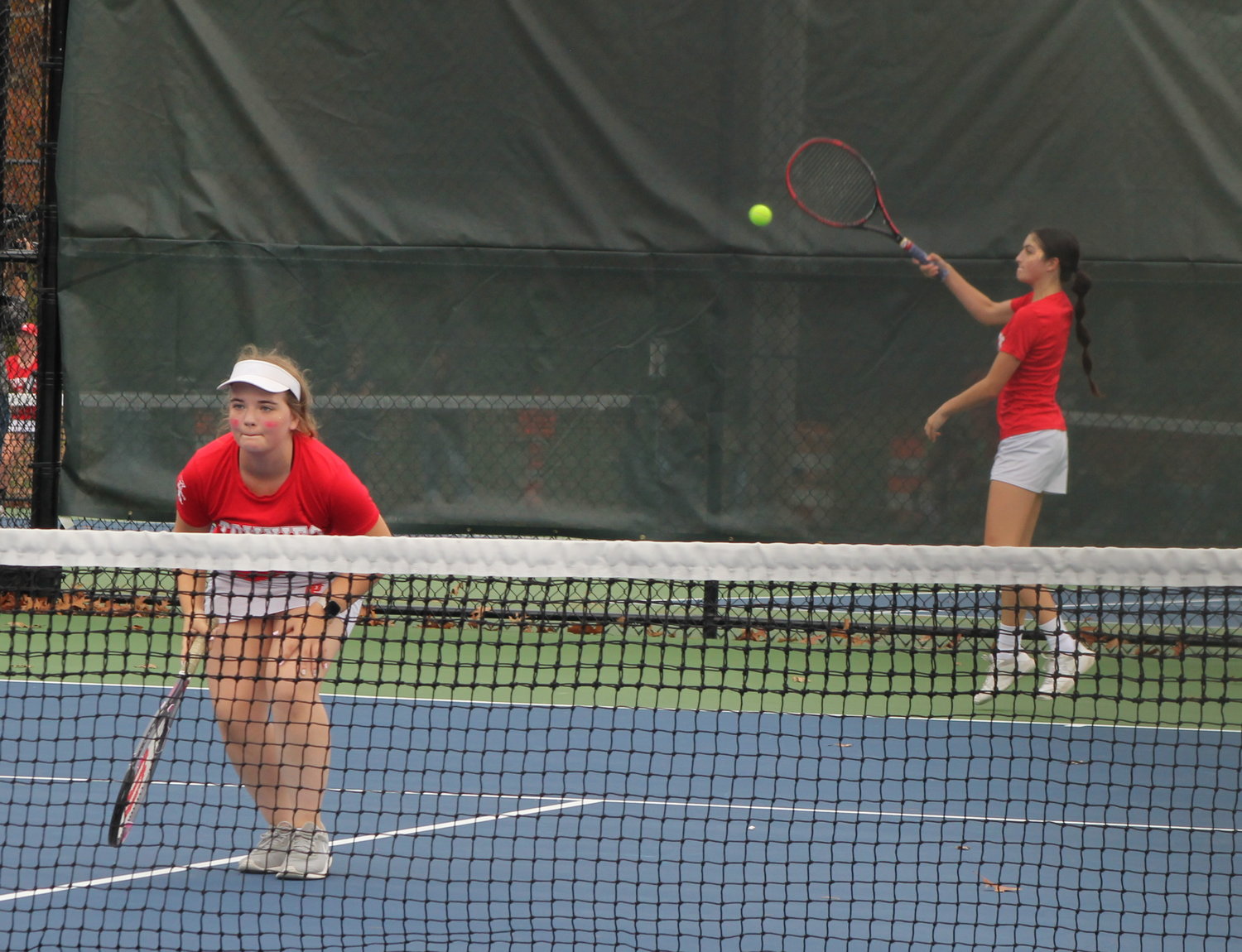 The EPHS No. 2 doubles tandem of Paris Martin (left) and Caroline Haggerty play their match against Bay View in the 2022 Division III championship contest November 5. The duo finished undefeated a team 14-0 and individually at 17-0. 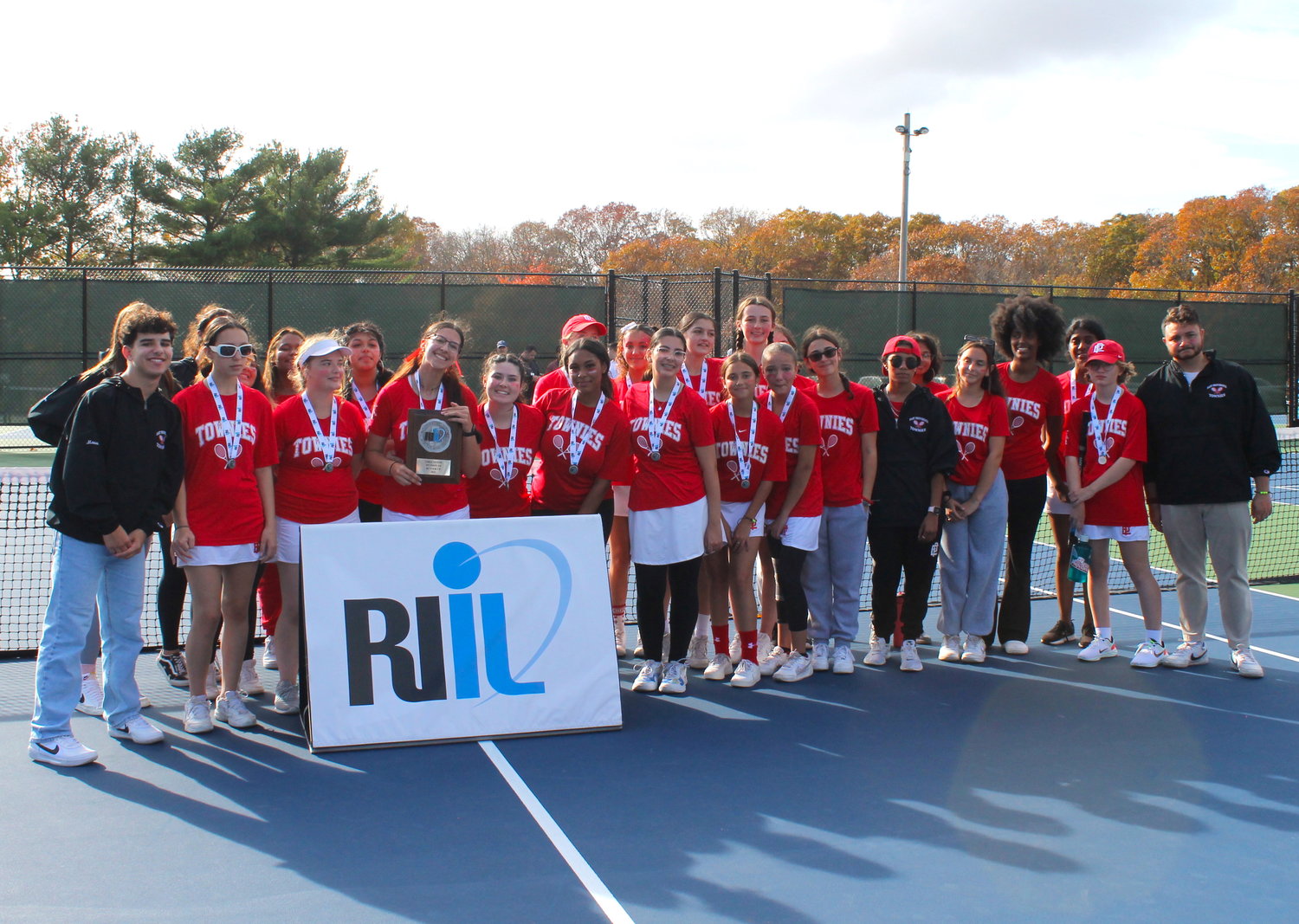 The Townies gather after fall to the neighboring Bengals 4-3. 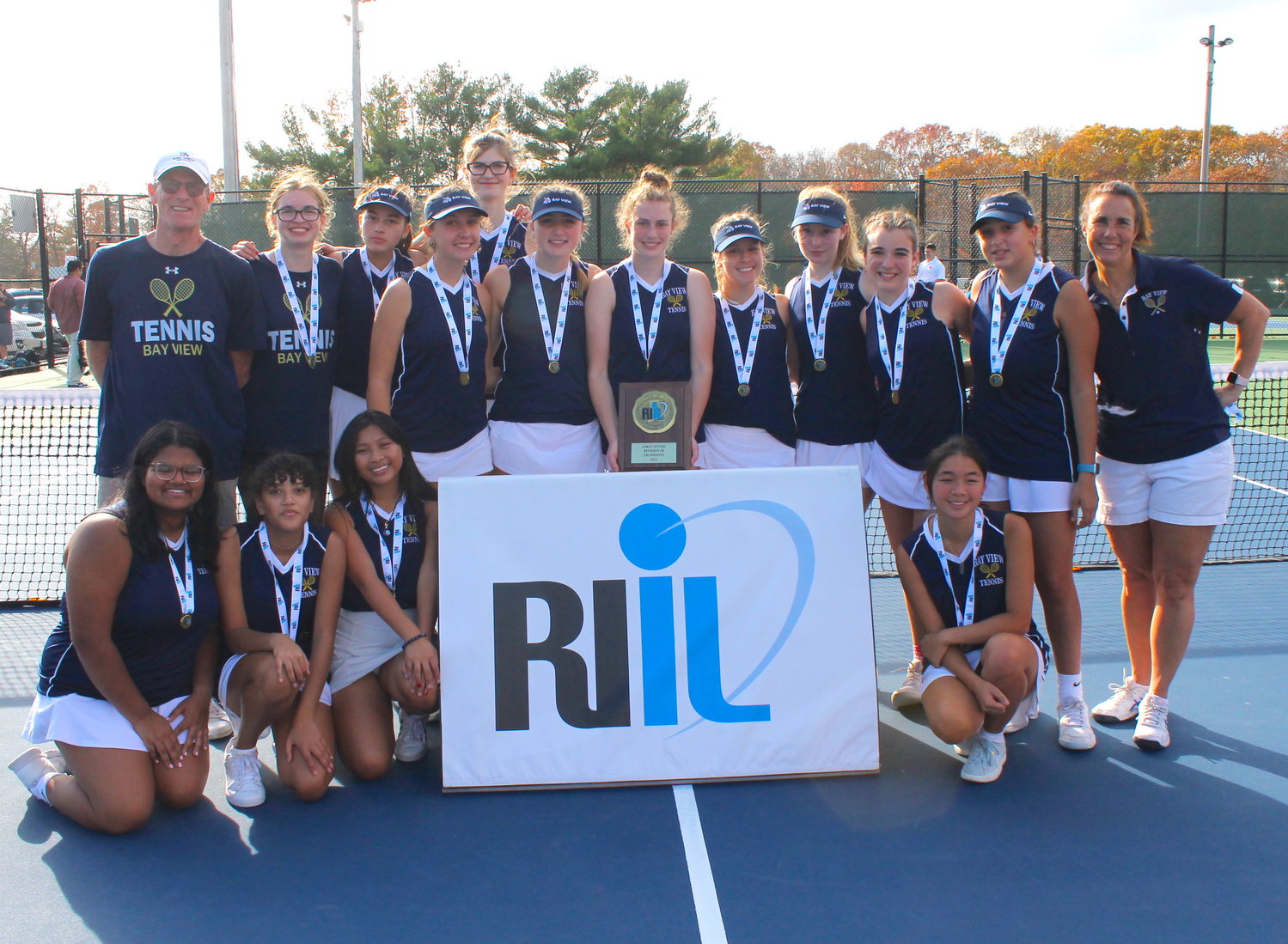 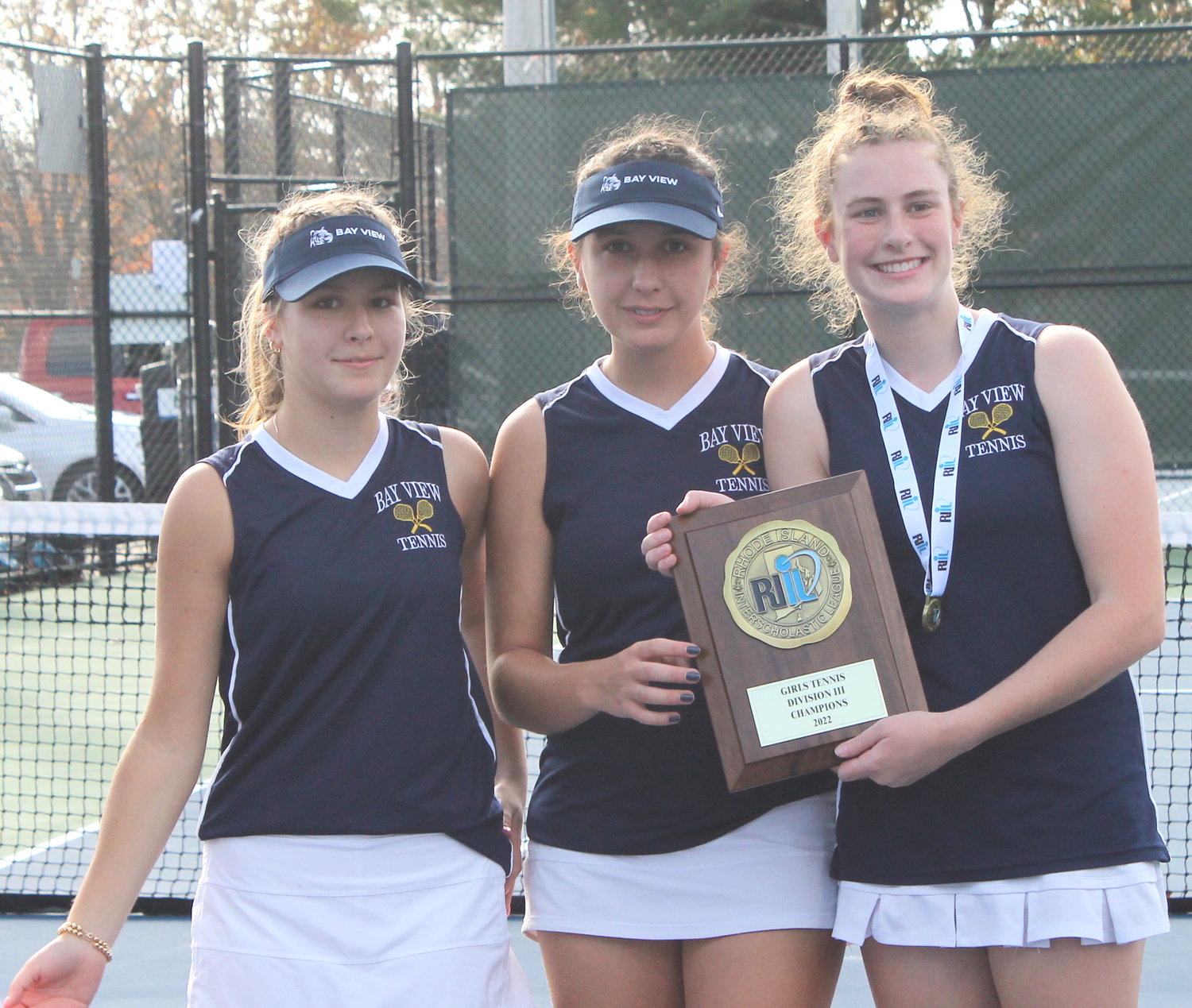 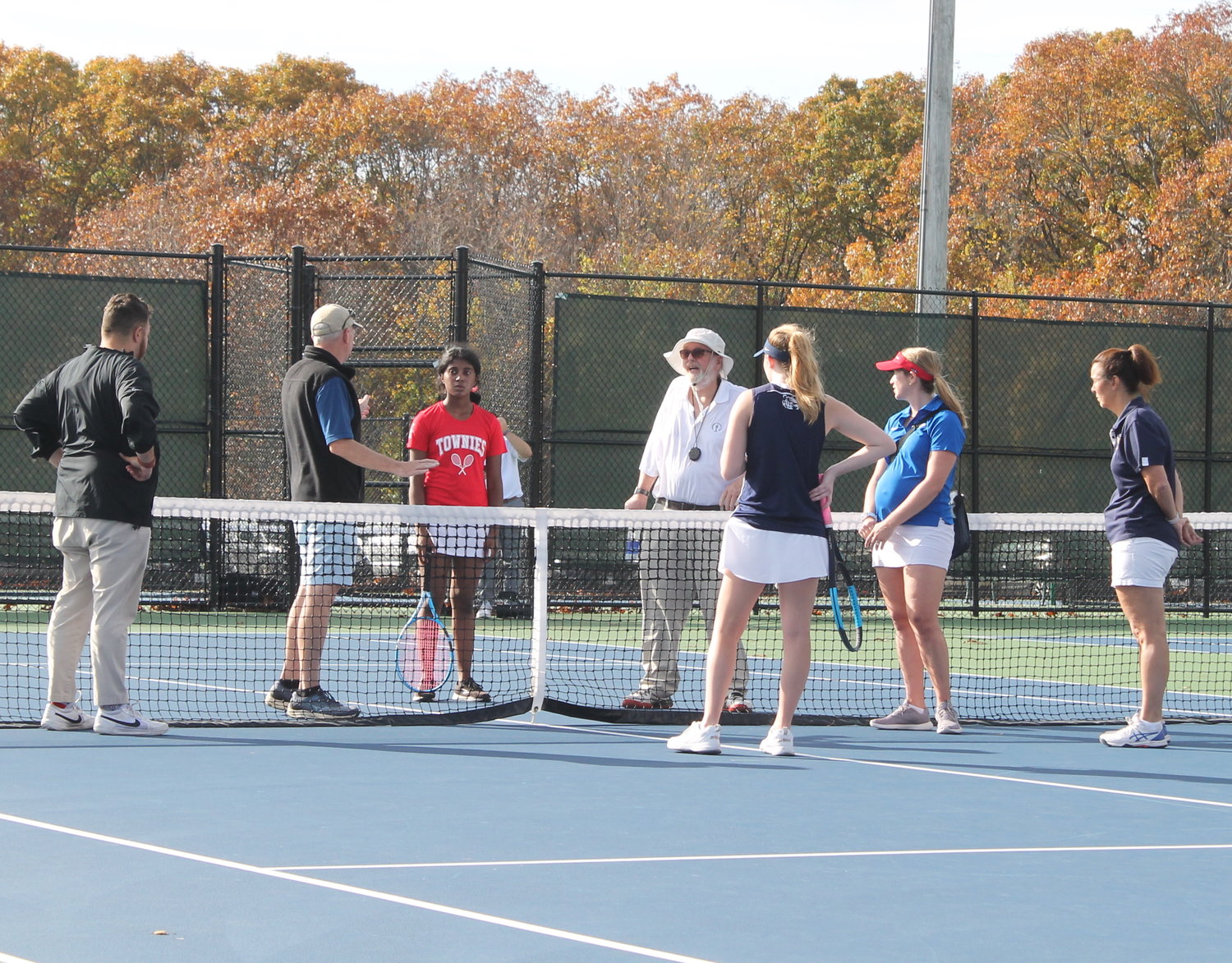 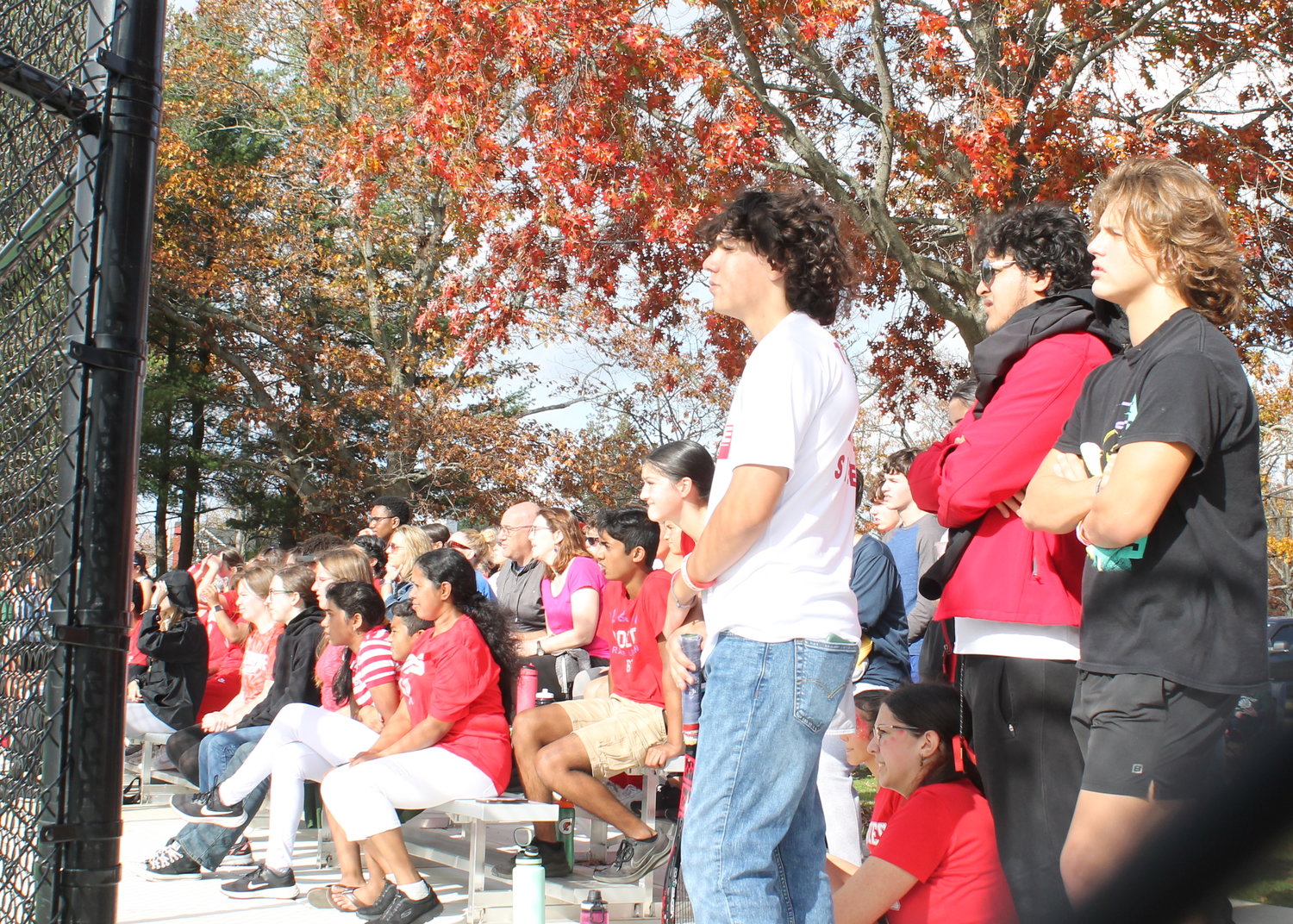 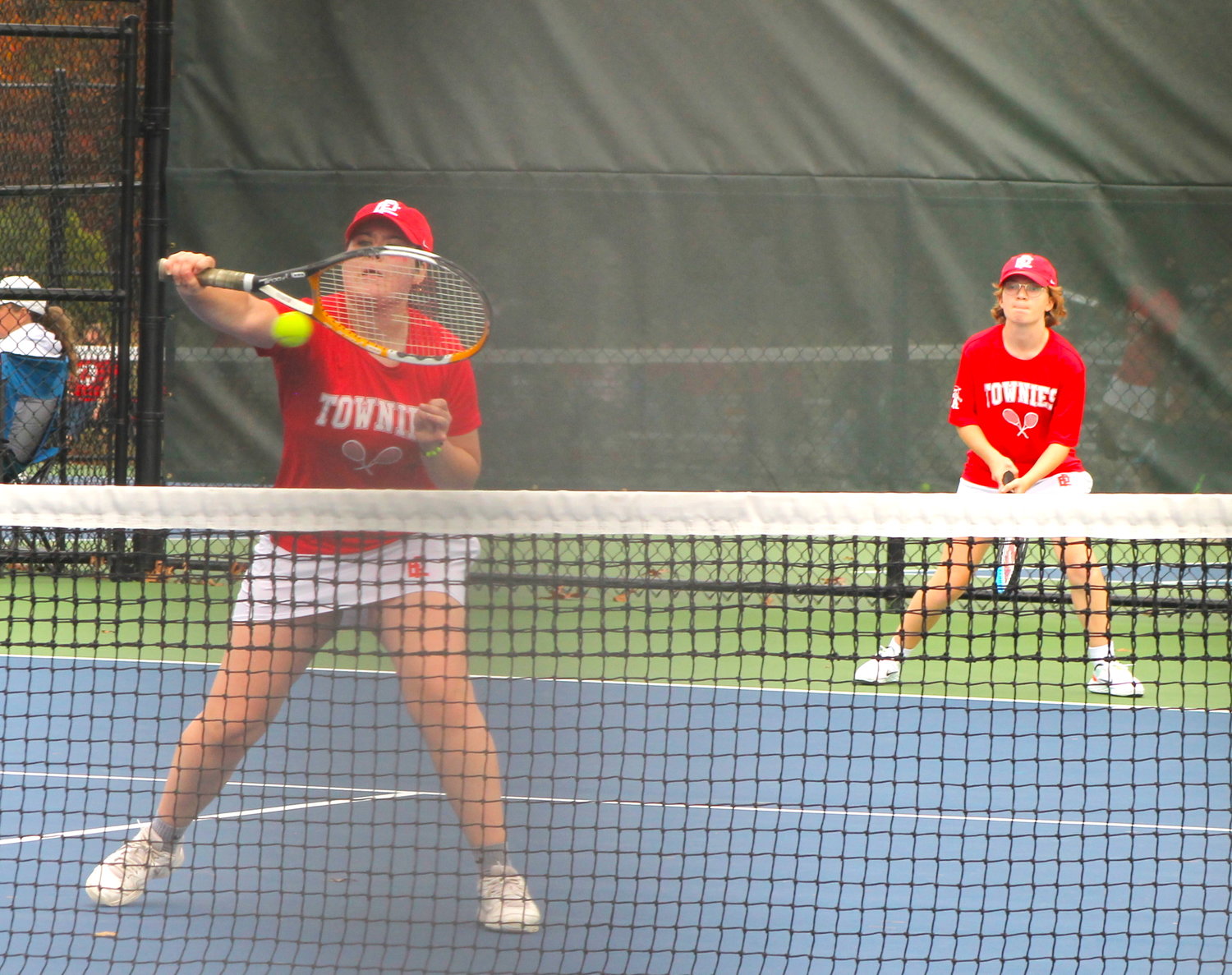 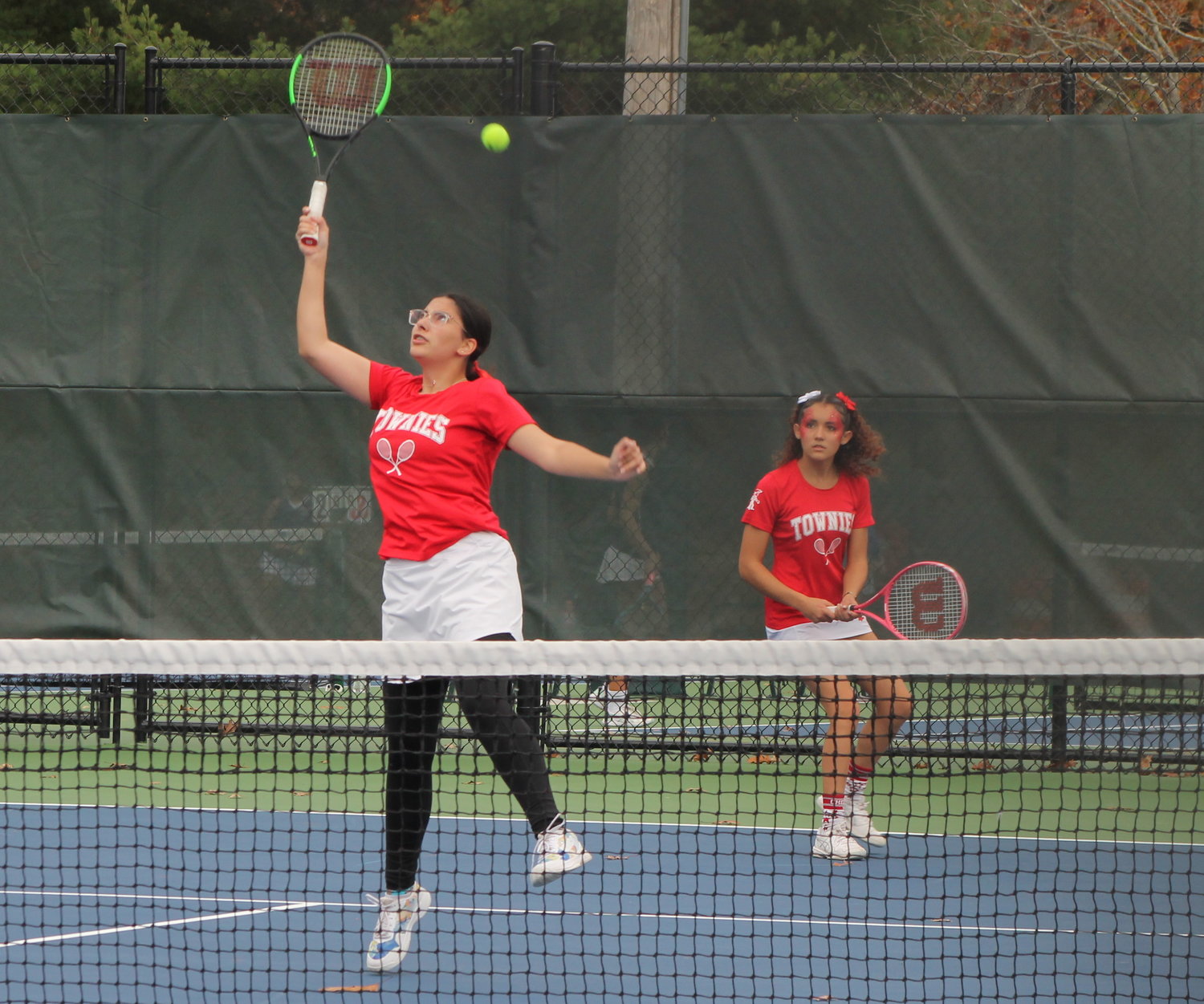 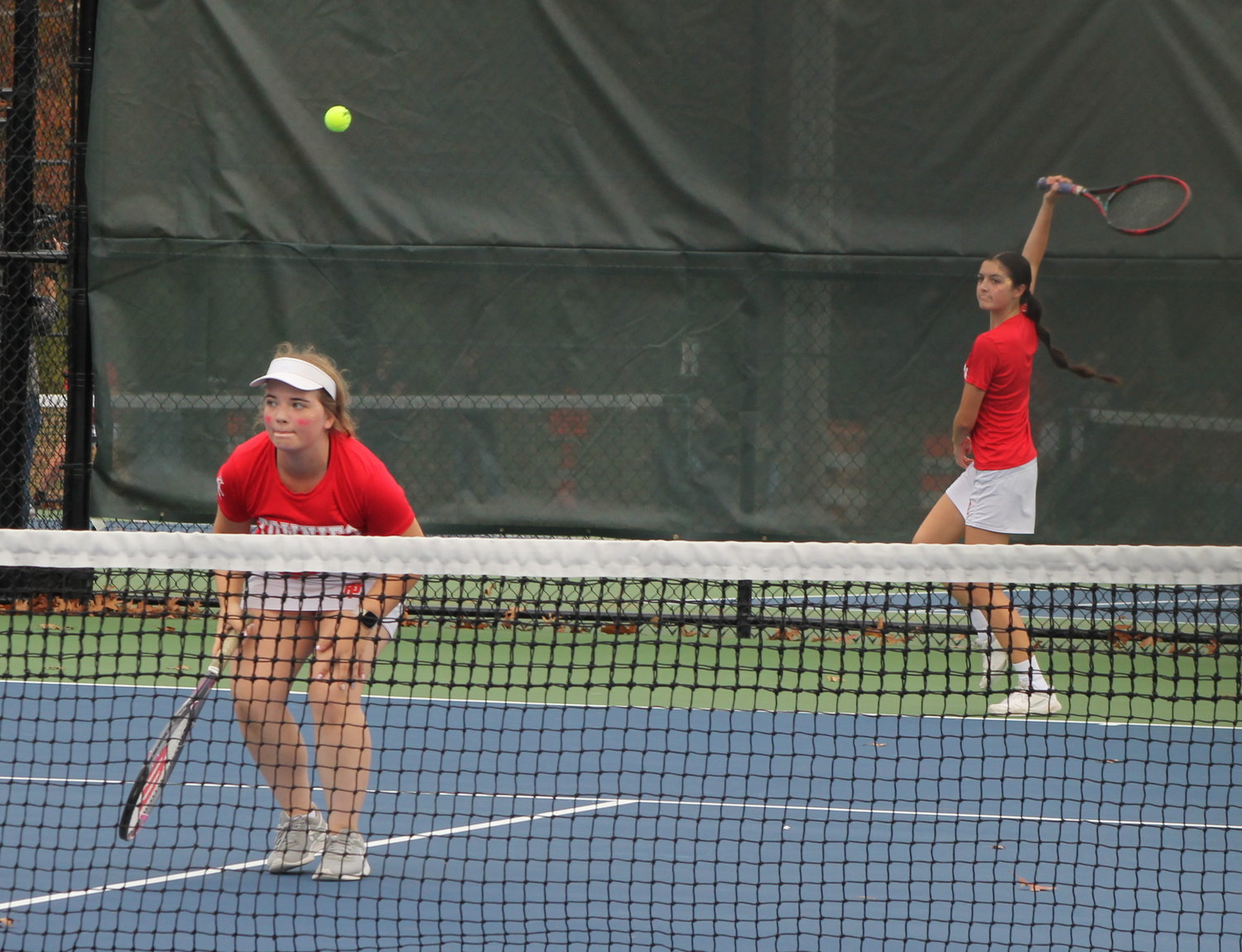 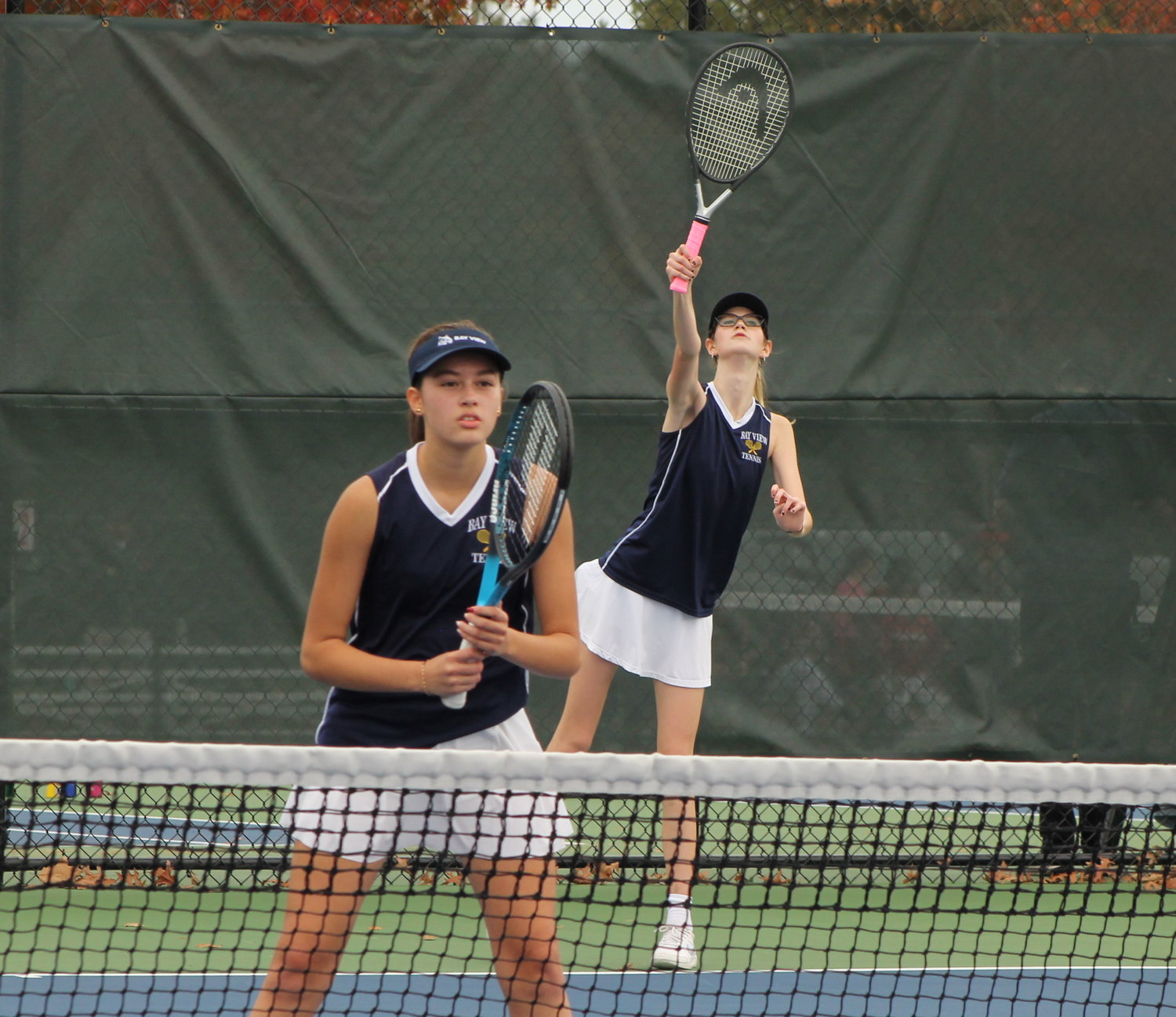 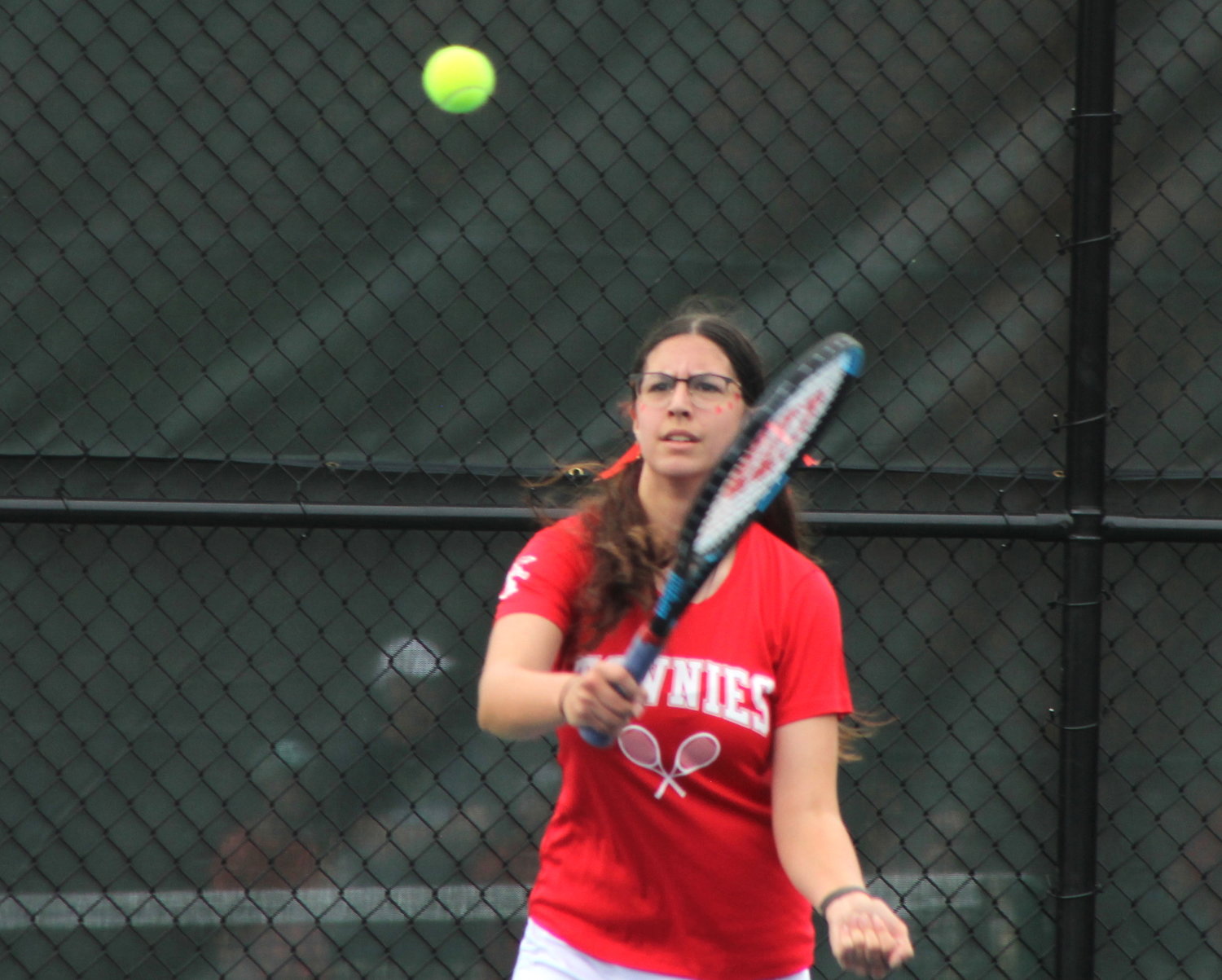 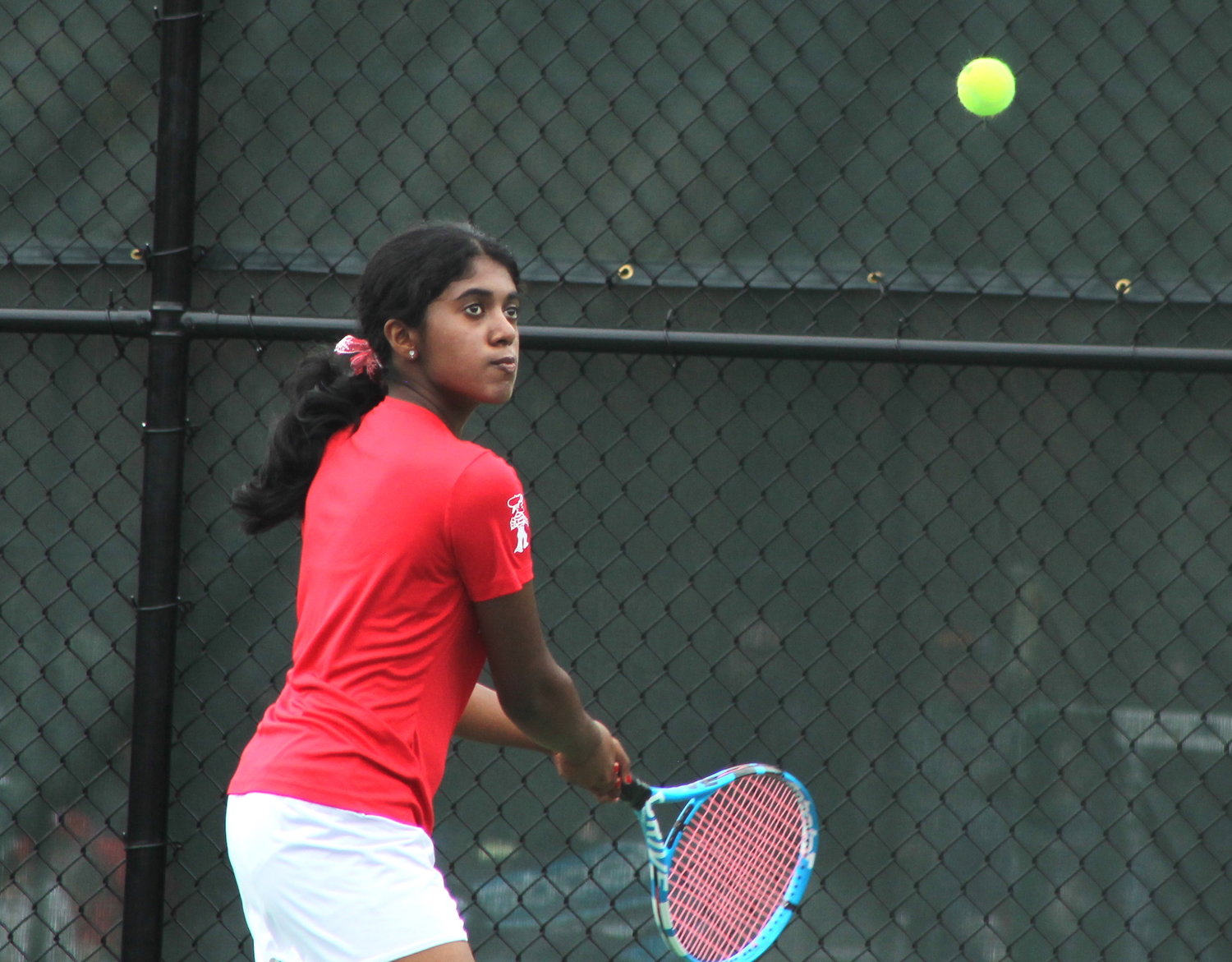 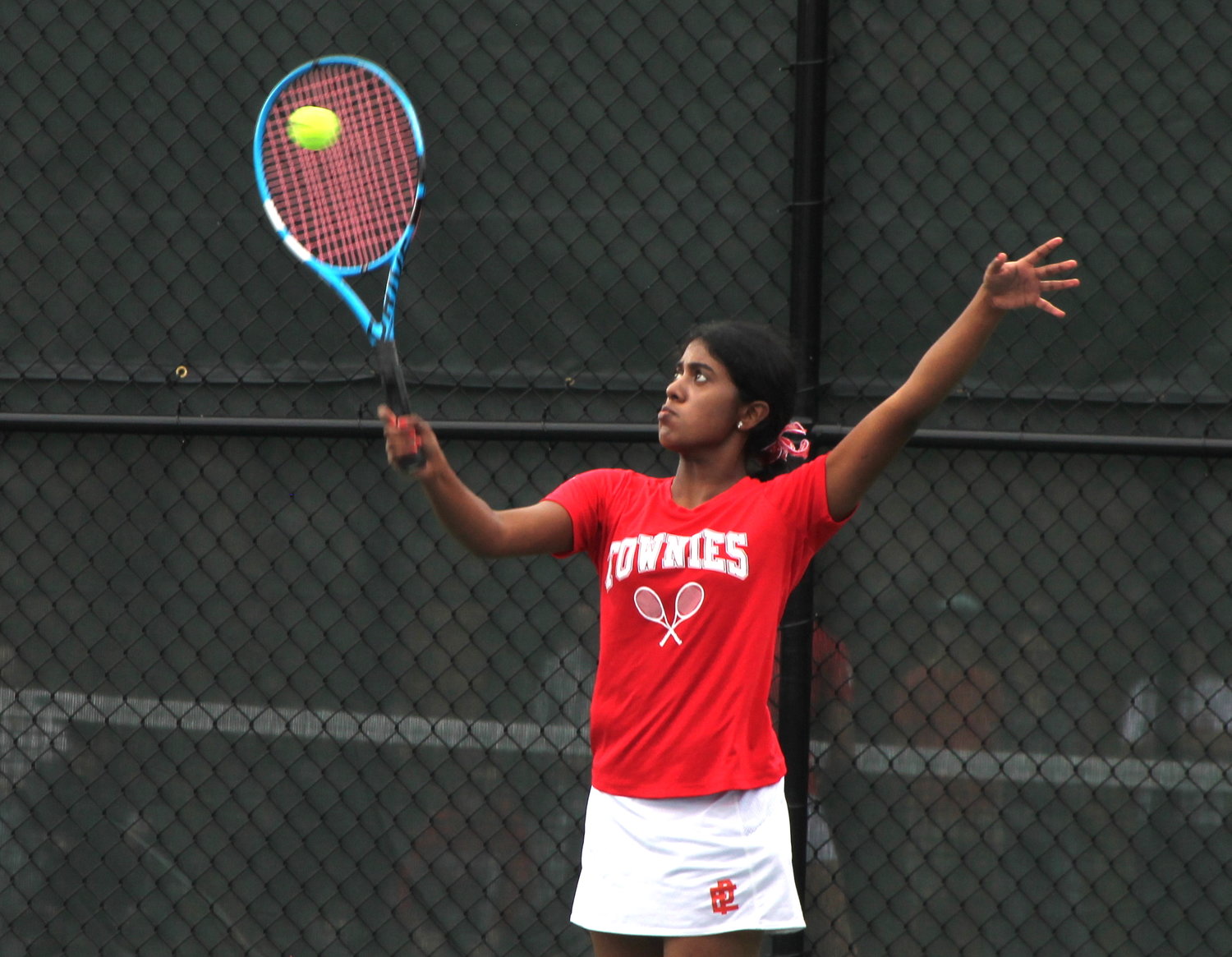 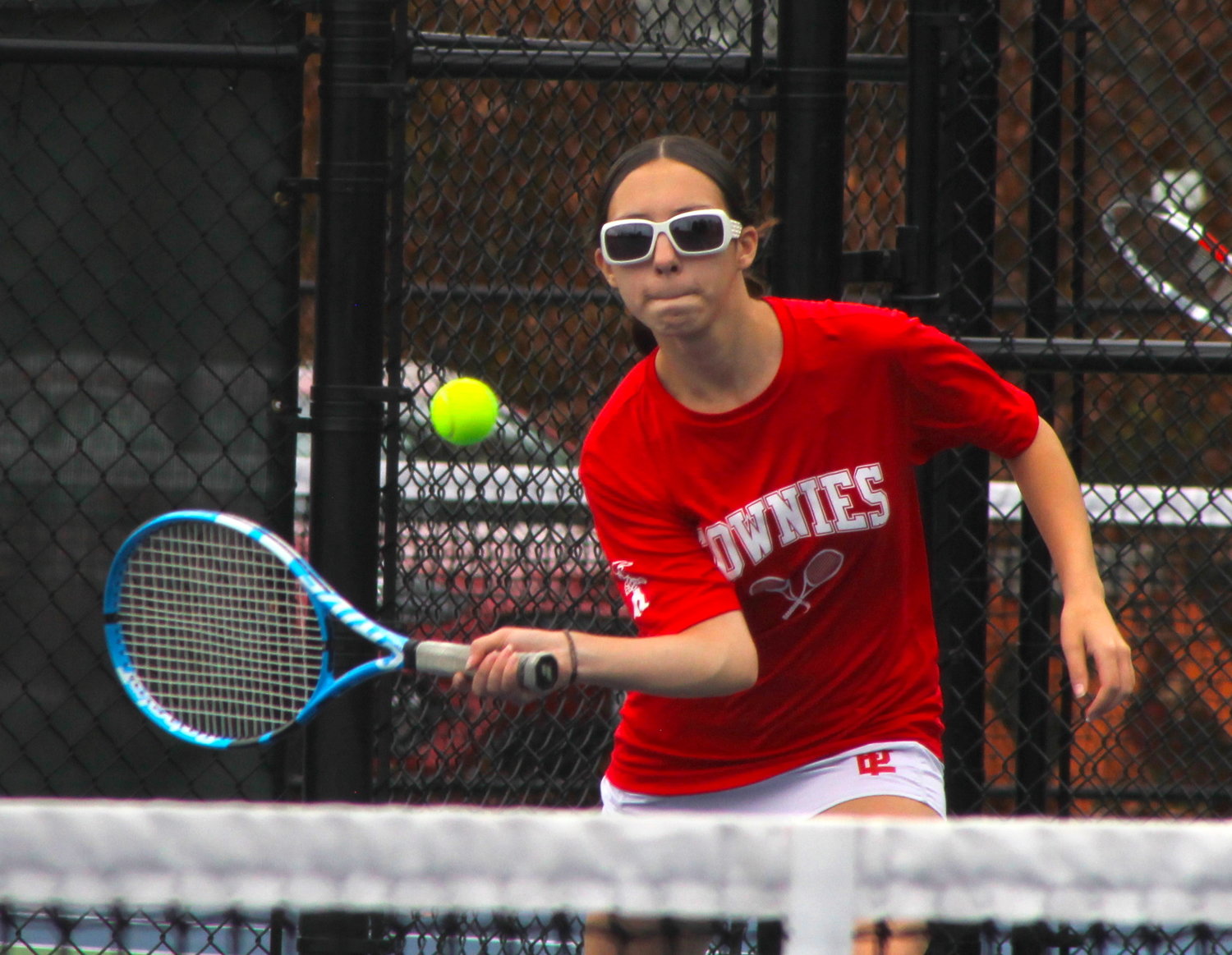 The top-seeded Bengals completed their perfect season when, at No. 2 singles, Amy Papa bested the Townies’ Lena Shanty 6-4 in the third and final set of the seventh and last match on court.

The championship was the fifth in school history and first in D-III for Bay View, which wound up with an unblemished 17-0 mark. The Bengals were once a state power, winning back-to-back Division I championships in 2009 and 2010 led by city native Rebecca Curran. A decade earlier, Bay View also won consecutive D-II crowns in 1999 and 2000.

“It was just amazing. These girls fought hard all season. They never took anything for granted,” said Bay View head coach Monique Collins. The title was her first as leader of the program.

She added, “I knew we were going to have a good season. We finished 13-3 last season (losing to unbeaten 2021 D-III champ Lincoln School in the semis). But an undefeated season, no, I never saw that happening.”

For the second-seeded Townies, they capped their best fall since the 2016 EPHS edition captured the same D-III championship. East Providence lost just twice in its 17 outings this season, both by the same narrow 4-3 counts to the Bengals.

“We did better than I believe a lot of people thought we were going do. We went from winning four games and out of the playoffs to 15 wins and a finals run. I asked these girls to put their best foot forward all season and they did just that,” said EPHS interim head coach Slade Sharma referring to the Townies’ 4-9 record last season.

He added, “I’m proud of these girls, the team is so close with one another. No one misses any practices, everyone’s always on time and excited. This is the culture I wanted to create, because I knew it would be the best to serve them…Townie tennis is alive and well because of these girls. I’m truly lucky to be their coach.”

Finals notes
On a balmy but blustery day at Slater, the traditional home for Rhode Island Interscholastic League championship tennis, it was the Townies who took an early lead in the overall match.

As they did all fall, East Providence’s second and third doubles tandems of Paris Martin-Caroline Haggerty and Emma Gillheeney-Tianna Brierly provided the Townies with a pair of quick points to give their side a 2-0 edge.

“It’s been great. There’s some pressure because it’s almost like the team expects us to get that point. But it’s also been really fulfilling being able to contribute that point to a team that has given me so much,” Haggerty, a junior, said of the Townies’ success in doubles.

At No. 2, the Martin-Haggerty duo finished their seasons undefeated individually at 17-0 and as a team at 14-0 with their 6-0, 6-2 win over the Bengals’ Olivia Mattos and Samantha Garagoliano.

At three, likewise, the Gillheeney-Brierly combo finished at 11-0 as a team with Brierly also 16-0 individually following their 6-2, 6-0 win over Bay View’s Olivia Cobery and Angelina Maldonado.

“Honestly, at first it was real tough, but I don’t know what happened in the second set, but it got a lot easier,” said Brierly, a junior, about their win Saturday.

Gillheeney, a senior, added, “There were some jitters at the beginning, but then we kind of relaxed after that.”

Things leveled off a bit later when the Bengals finished off wins at first and third singles. Elizabeth Healey beat E.P.’s Jaelyn Dasilva 1-and-2 at the top of the order. Phoebe Dolan rallied late in the first set of her match with the Townies’ Hope Moran to win it 7-5, then cruised with a 6-0 bagel in the second.

The score remained tied at two for quite a while with matches at second and fourth singles as well as first doubles going the distance.

East Providence’s Santana Pannone was first off the court with here 7-5, 6-7 (3-7) and 6-0 win over Satanvi Kavali at fourth singles. Pannone finished her season undefeated at 14-0 from the fourth spot.

Razor thin final sets ultimately decided the championship, including a 7-6 (8-6), 1-6 and 6-4 win by Bay View’s top tandem of Taylor Ferraro-Natalia Annicelli over the Townies’ Katelyn Furtado and Isabella Hurley.

And lastly, Papa edged Shanty in what was the closest of close contests at second singles: 6-4, 5-7 and 6-4.

“If there was ever a girl I would want out to there to finish a (match) it was her,” Collins said of Papa’s championship-clinching performance. “All season this year and last year, it’s been three sets. She always ground it out. She always got it done.”

The Townies took to social media last Thursday, Nov. 3, after their 4-2 win over Scituate in the semifinals to confidentially state they would avenge their lone previous loss to the Bengals back in early September.

Bay View did not engage with a response in kind, preferring to do their talking with their racquets.

“There was a lot of talk the other night about who was going to win. My girls never bought into that. They just needed to come out, do what they needed to do. They did that. They stayed calm. And all of the things that we’ve worked on showed up today. As a coach, I couldn’t be more proud of them,” Collins said.

The controversy came in what proved the penultimate point of the deciding contest at second singles between Papa and Shanty.

Late in what proved the 10th and final game of the third set the players misunderstood/miscalled the score depending on whose version of events were adhered to.

After a lengthy conversation between the players themselves, coaches for both teams and local United State Tennis Association and RIIL officials on hand, Papa served for match point.

The ensuing five-stroke rally ended along with the match and the overall contest when Shanty’s forehand floated long over the base line.

To Papa’s credit, instead of immediately engaging her teammates who rushed the court in jubilation, she raced to other end to console a despondent Shanty before eventually joining the celebration.

“I just want to say what you saw at the end there, before she hugged her team she went over to her opponent. And I just think that says a lot about the character of Amy and of all my players,” Collins said.