Have a seat, Grace — you’ve earned it 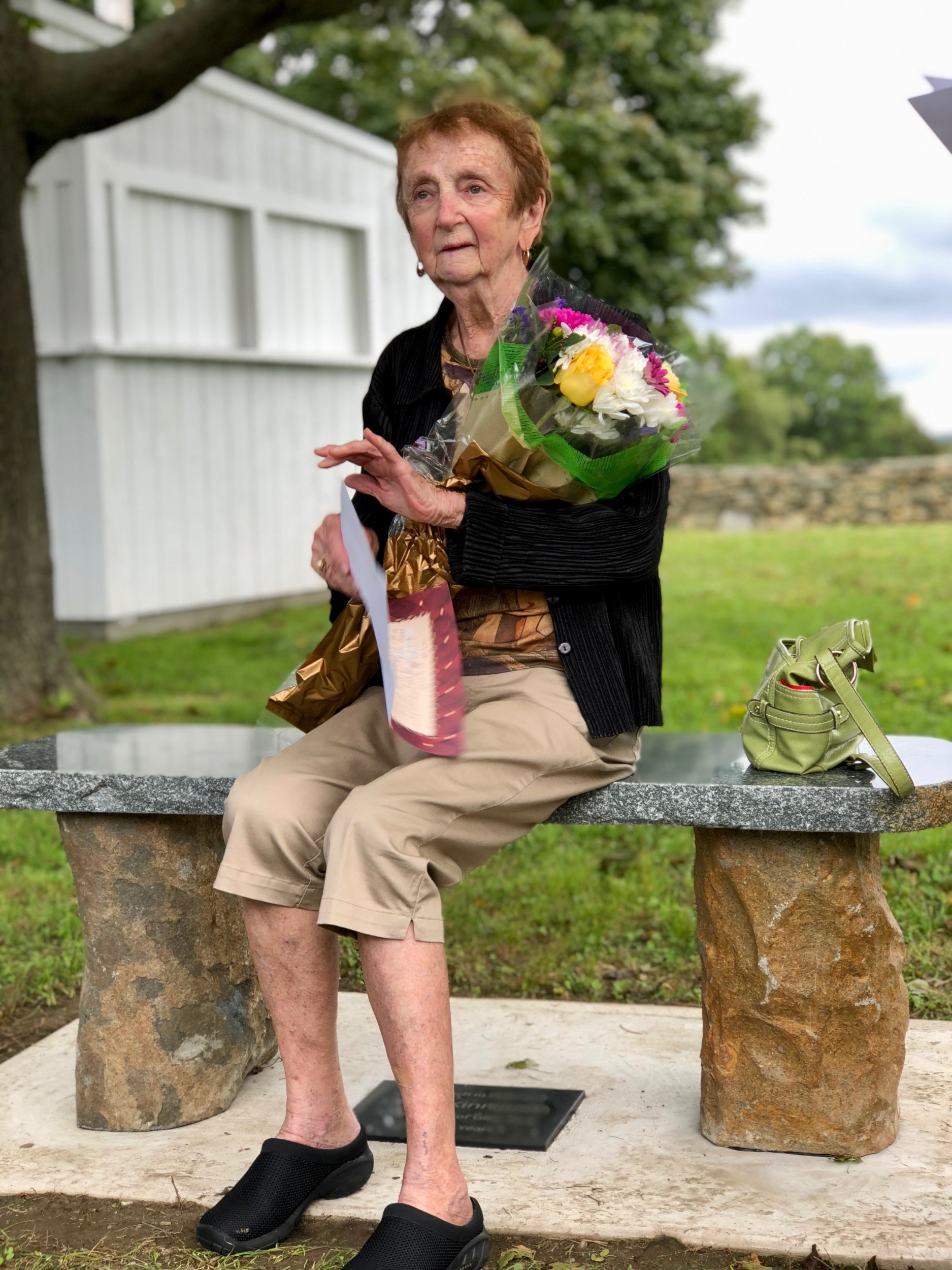 Grace Kinnunen sits on a bench that was dedicated in her honor during a ceremony at Glen Park on Thursday, Sept. 20. A plaque at its base calls Ms. Kinnunen a “champion of Glen Park for many years.”
Jim McGaw 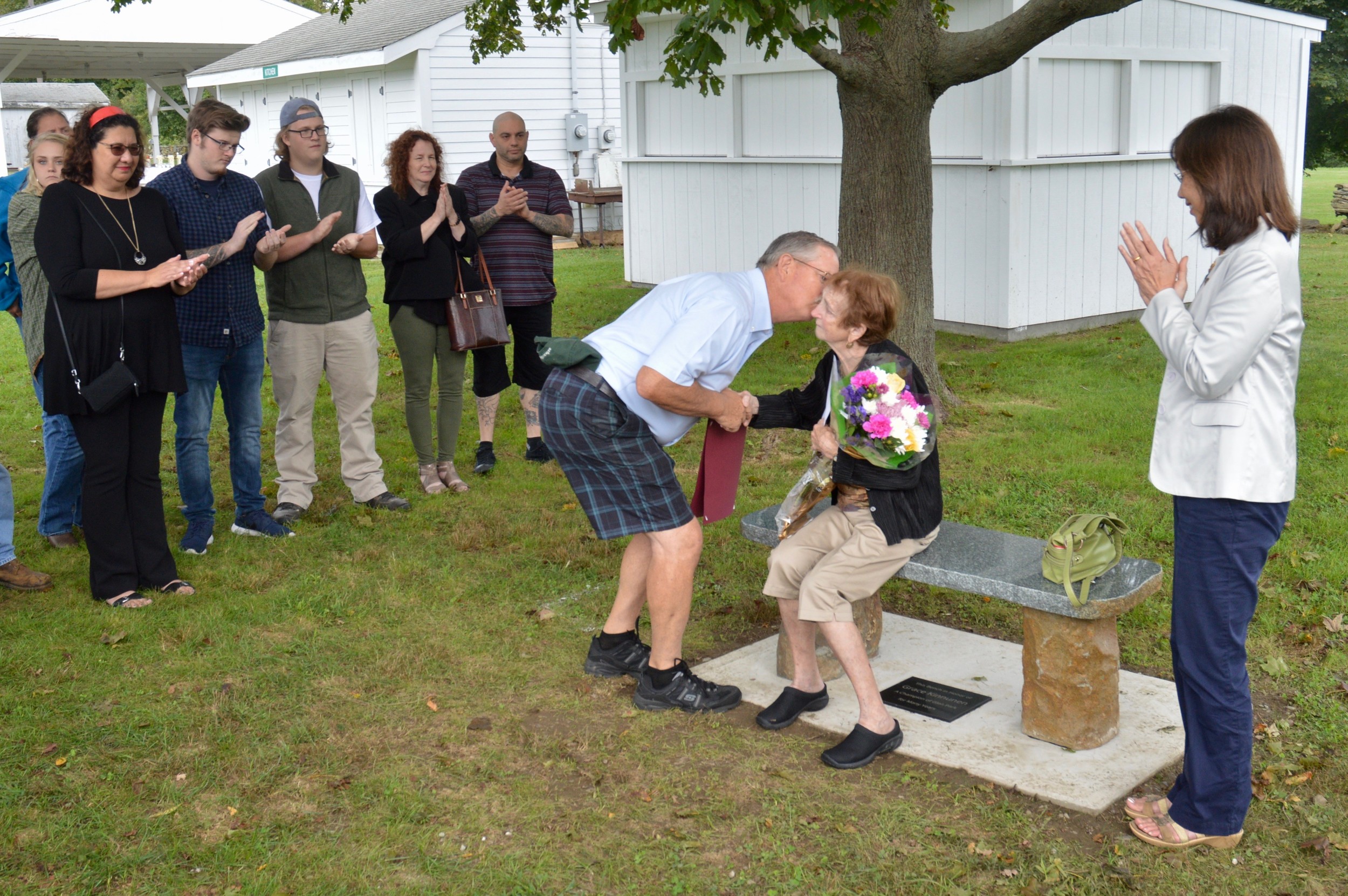 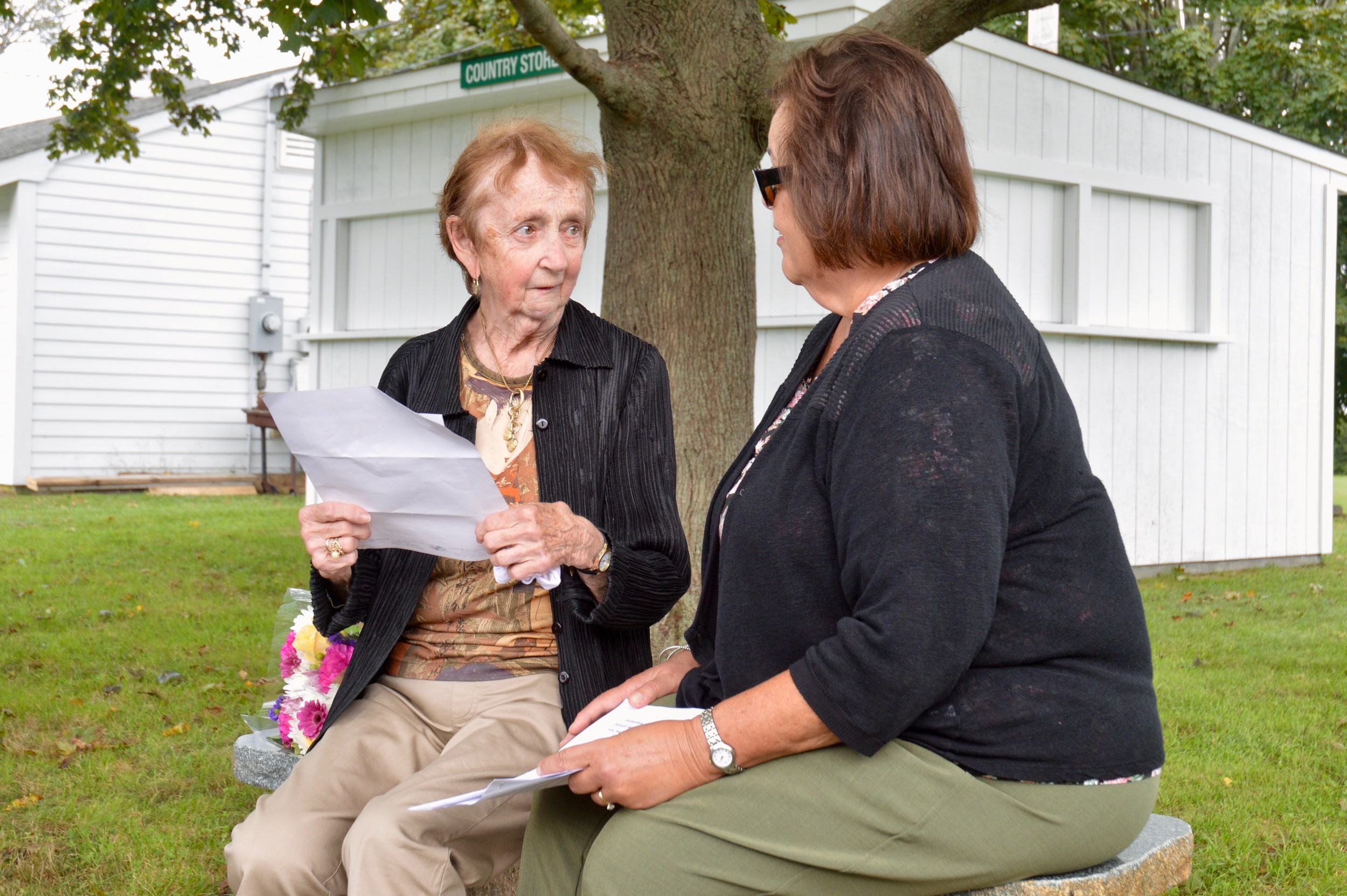 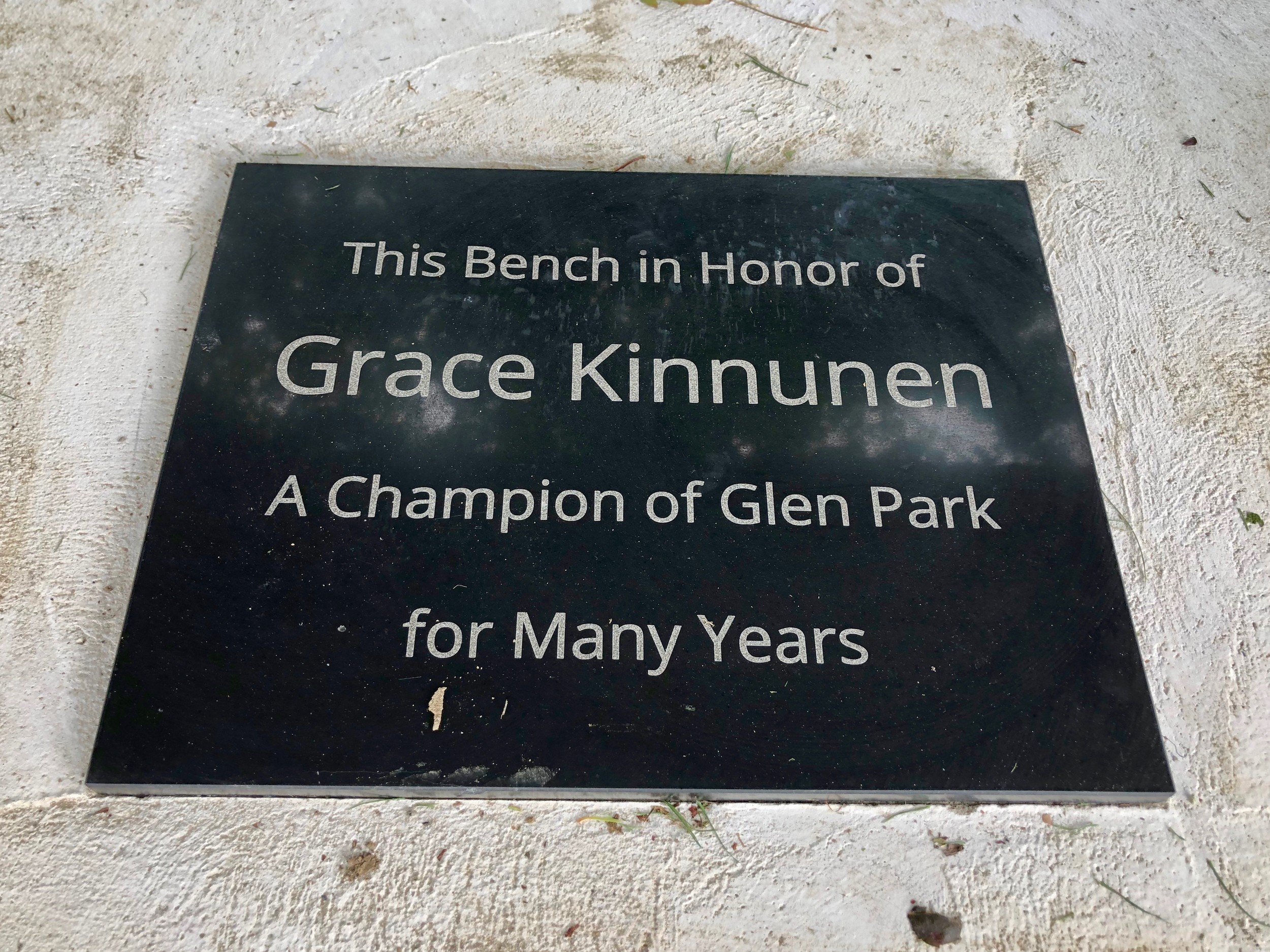 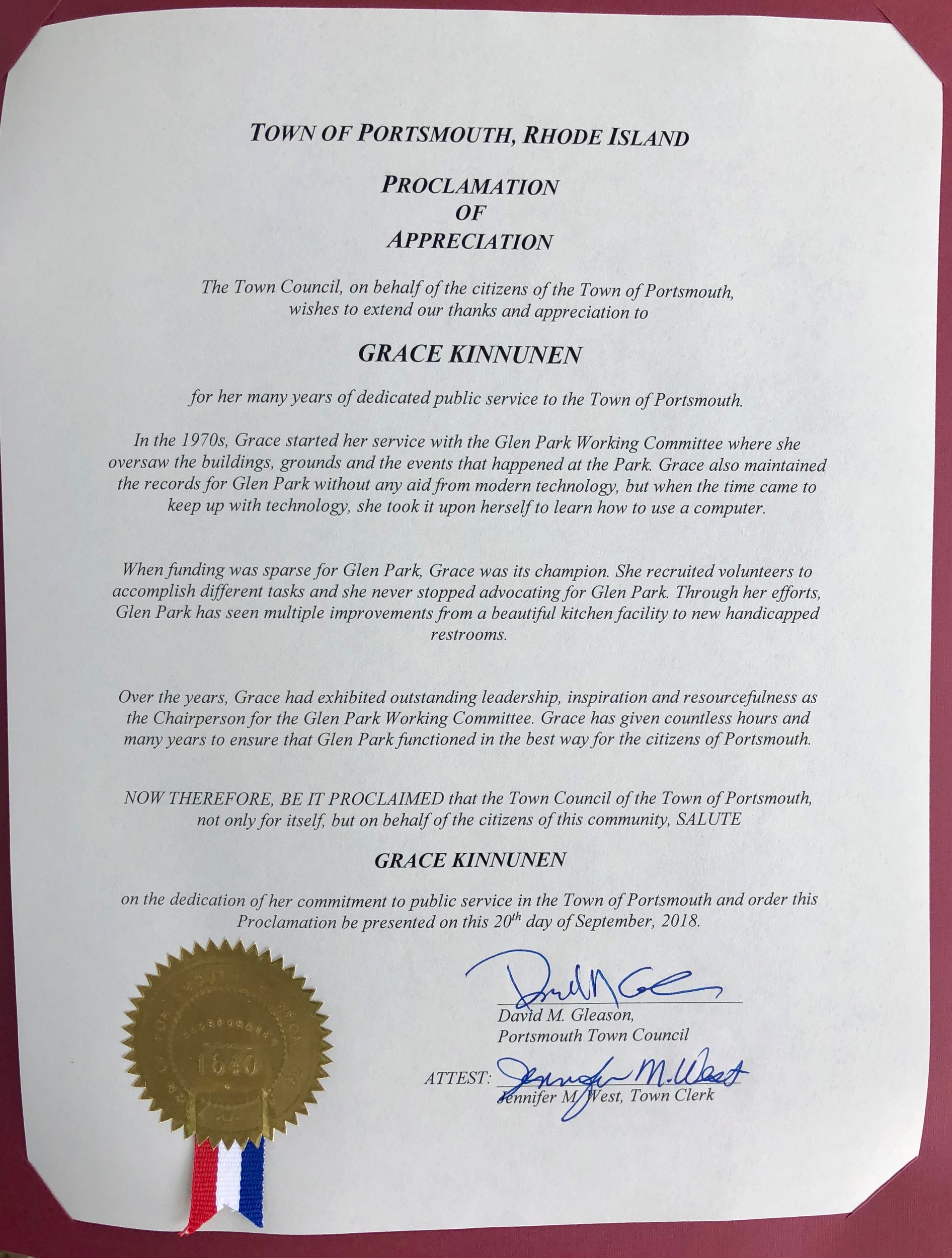 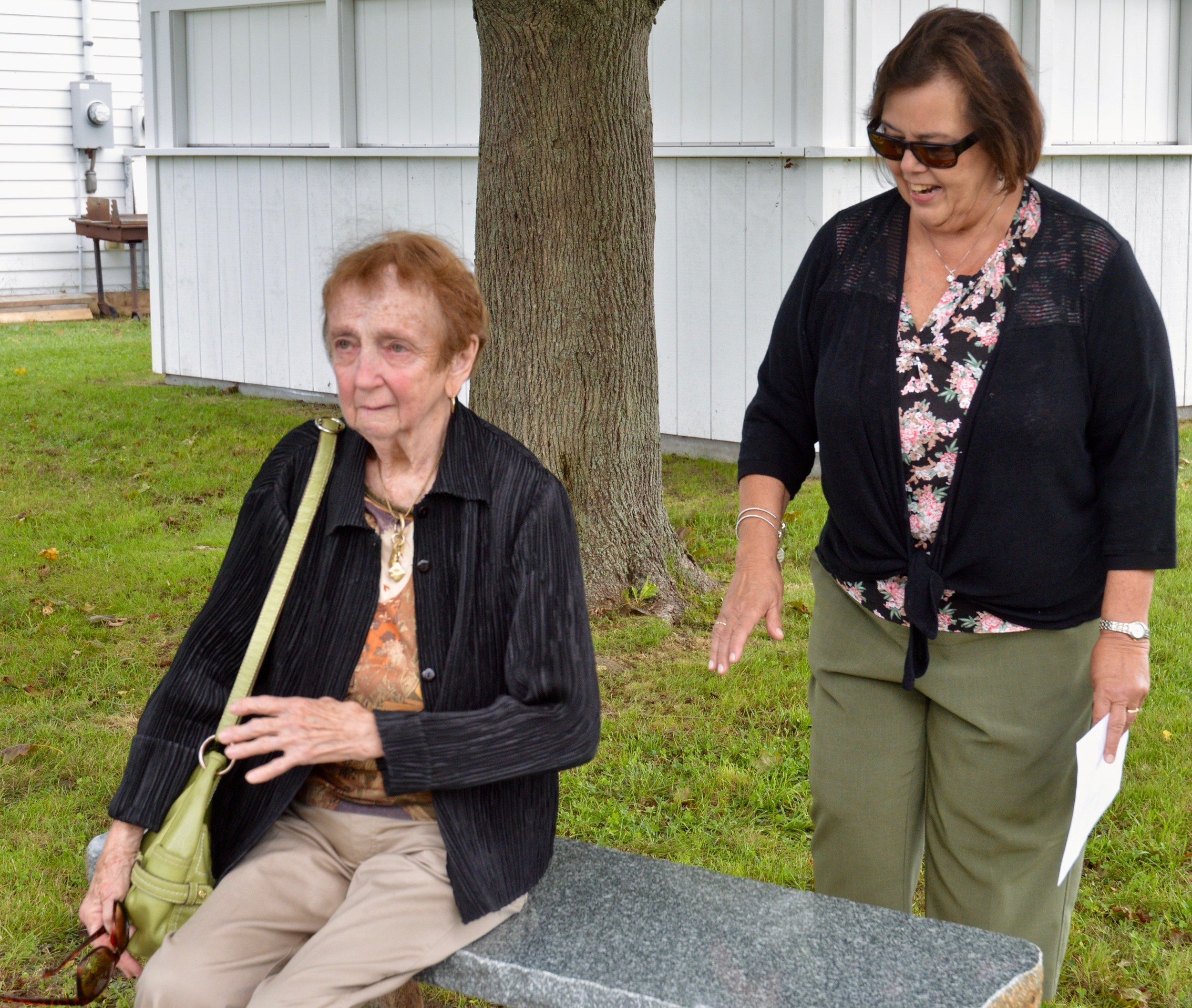 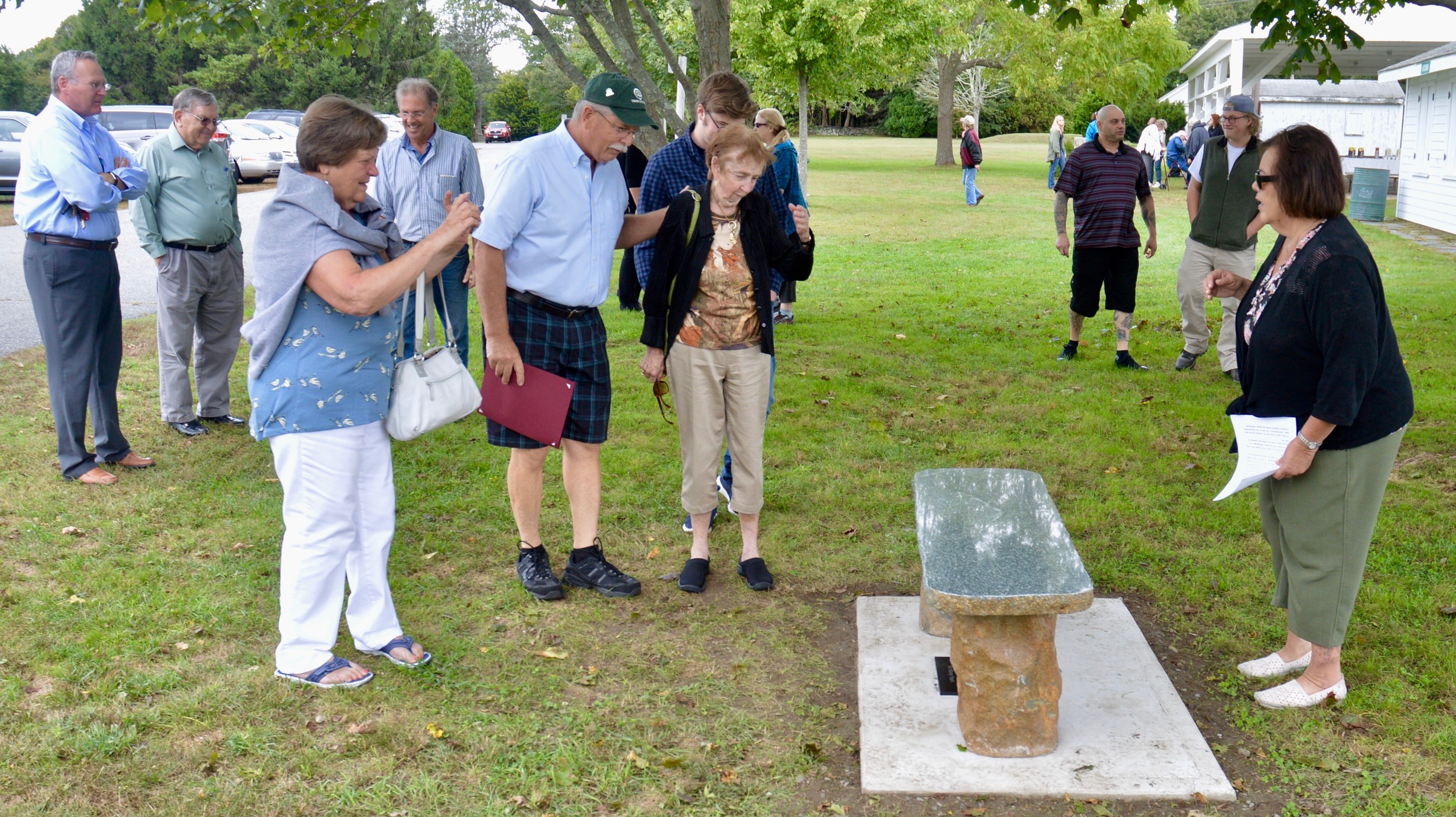 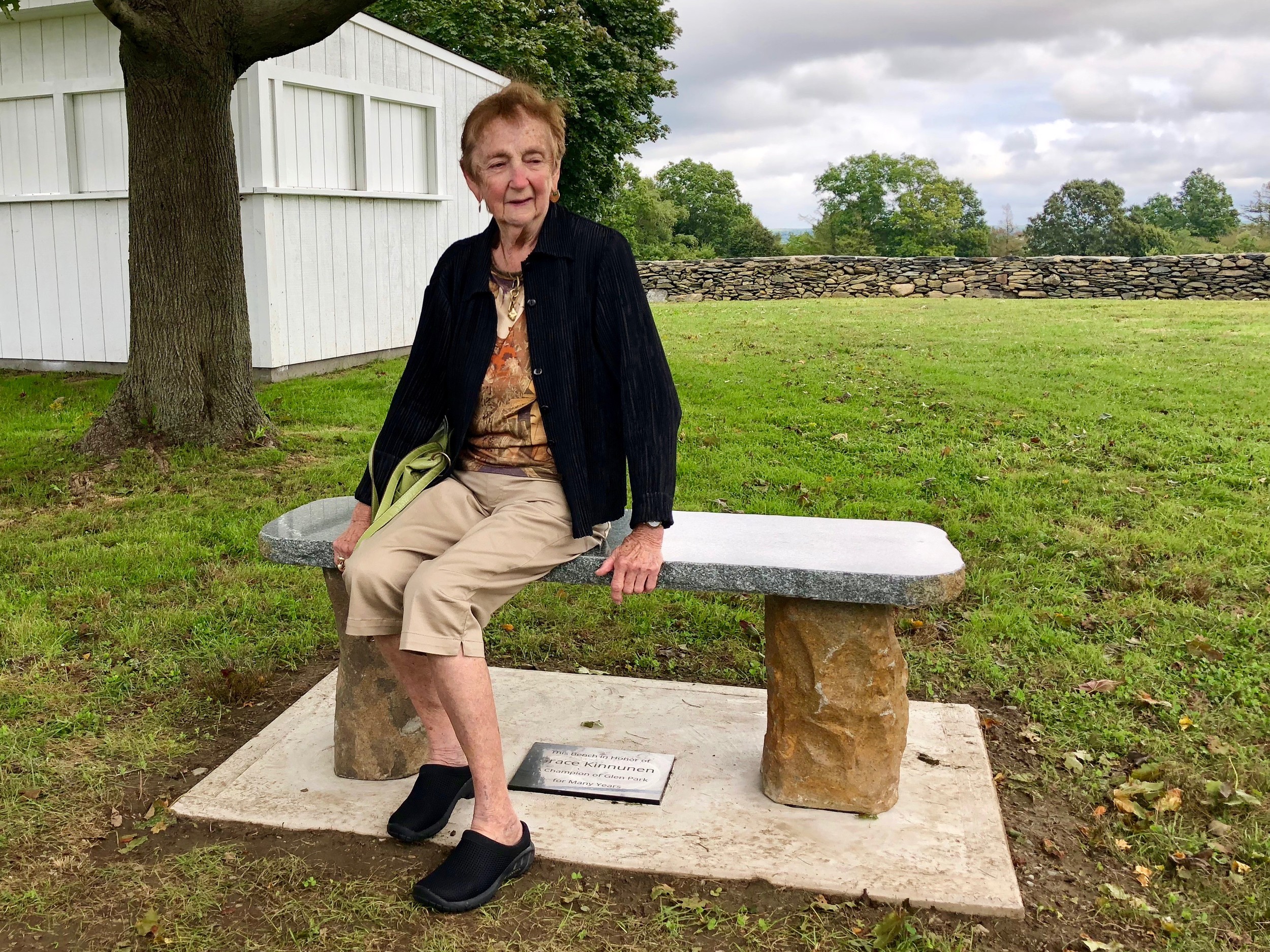 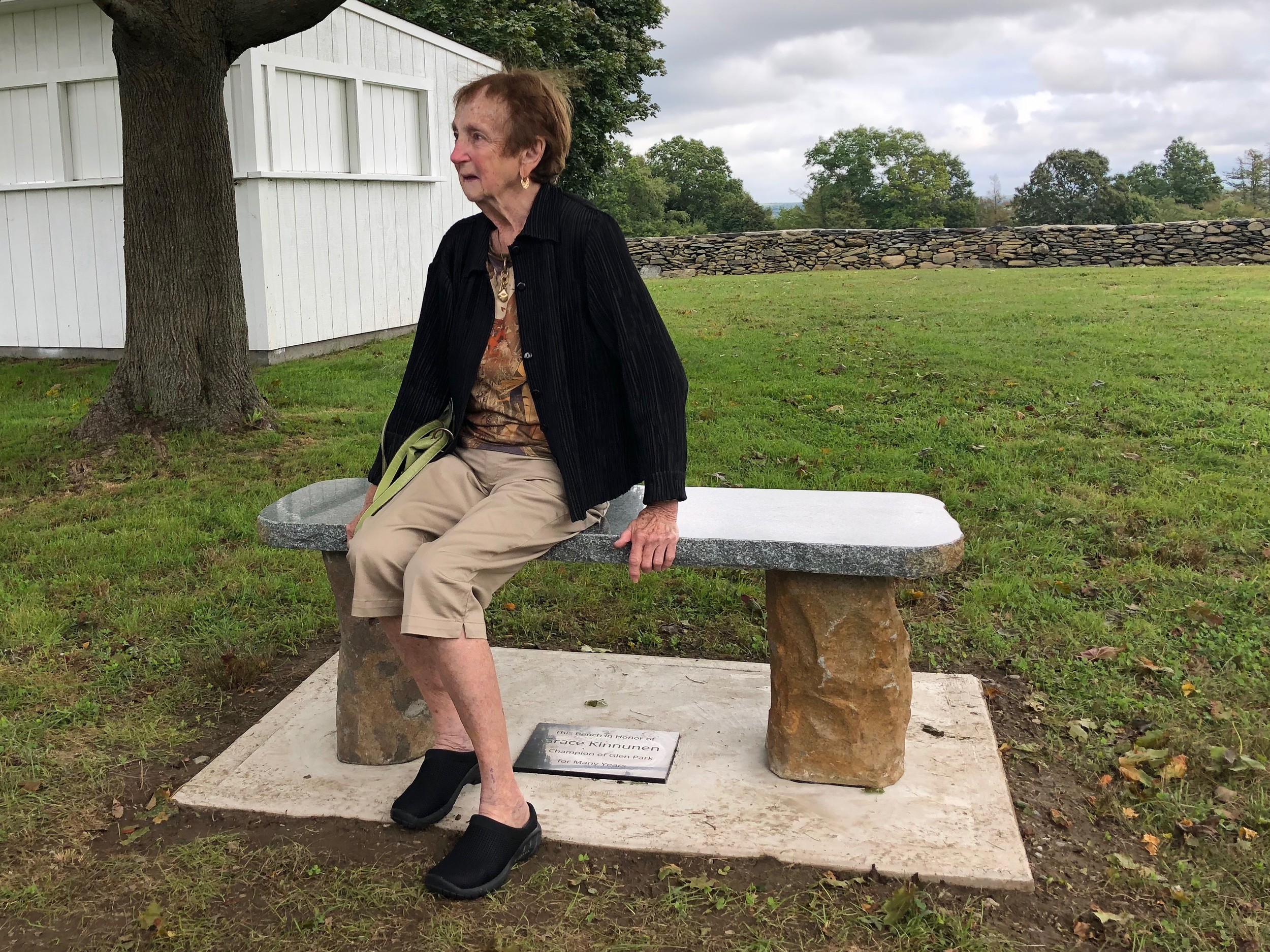 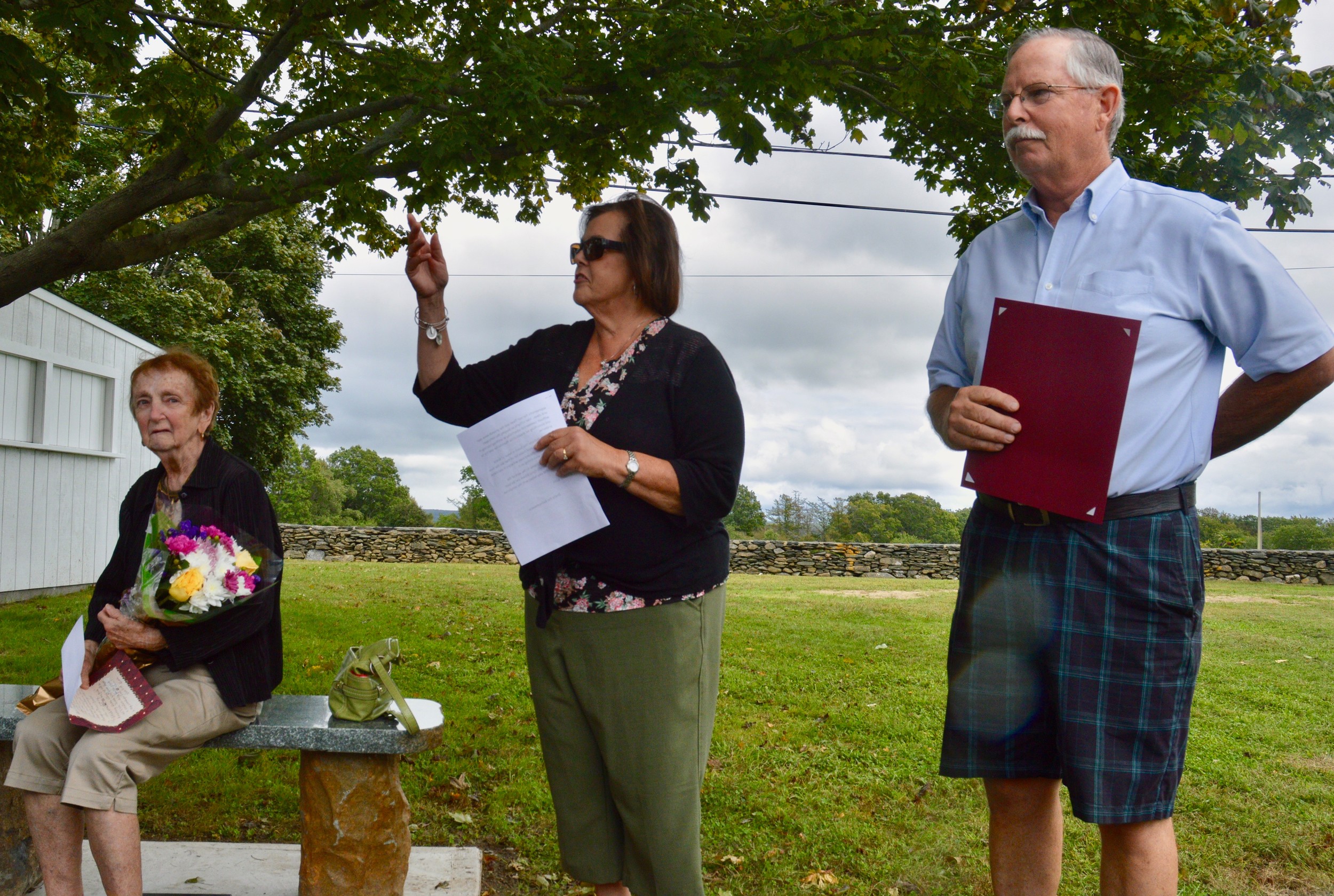 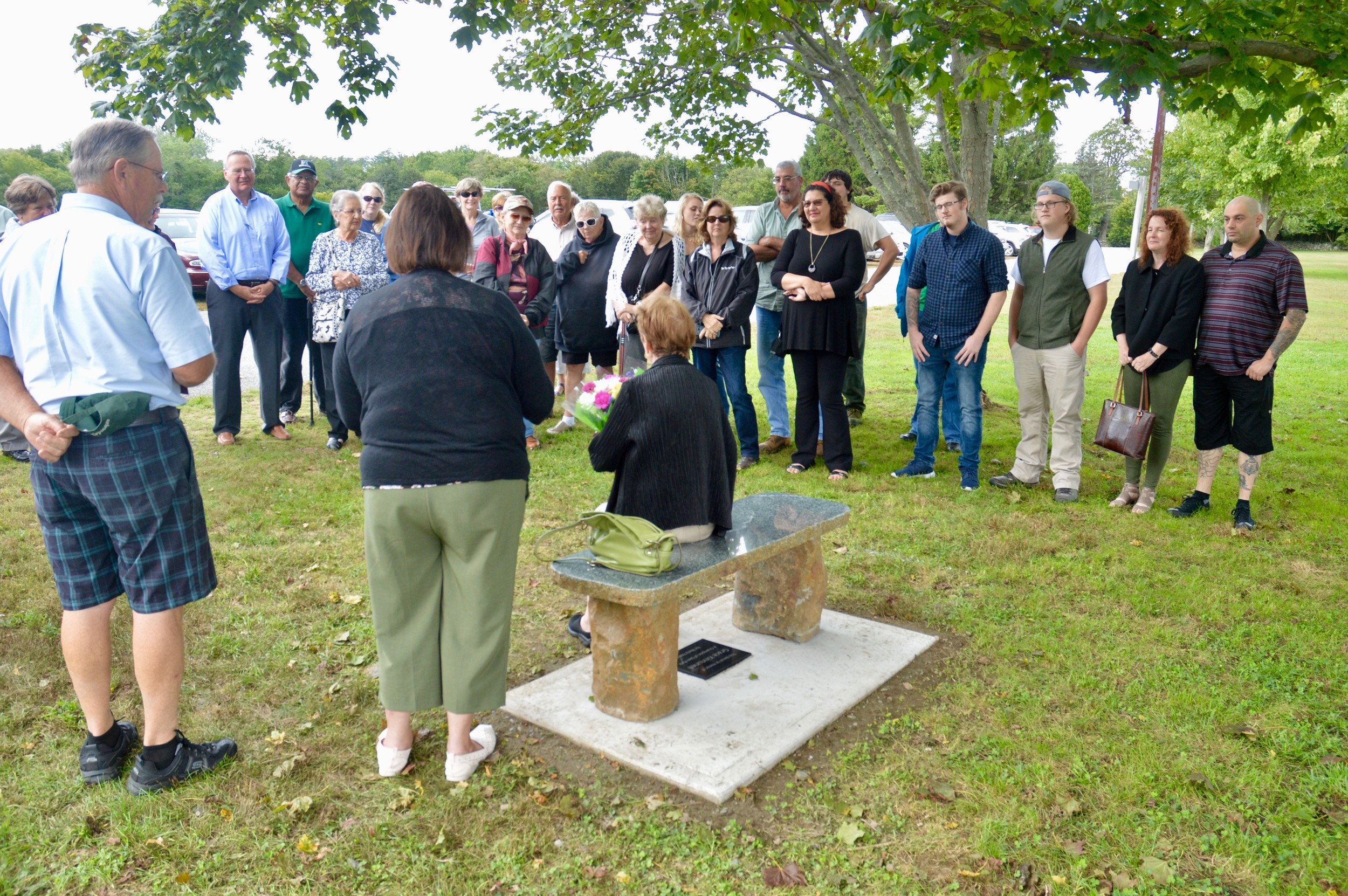 She did everything, including cleaning the kitchen and the restrooms, which were in a lot worse state at the time.”
Rosemary Davidson, Glen Park Working Committee
By Jim McGaw

PORTSMOUTH — Grace Kinnunen and her family always spent a lot of time at Glen Park.

“We had horses at home and I was part of the horse ring, so I was here a lot with horses,” Ms. Kinnunen said. “The park was just growing, but it needed to be tended to. People sometimes don’t respect it, so that’s what I started to do.”

After voters approved the purchase of the Glen in 1973, Ms. Kinnunen became an active member of the Glen Park Working Committee. Her volunteerism became a full-time job, however, after she retired as a Middletown school teacher in the late ’80s.

Ms. Kinnunen, who finally decided to step down from the committee earlier this year, was honored for her dedication and hard work during a ceremony at Glen Park on Thursday, Sept. 20. While friends, family members and town officials and staff members gathered around, she sat on a handsome bench installed in her honor.
At its base was a plaque bearing her name, along with a tribute: “A Champion of Glen Park for Many Years.”

She noted that for many years, Ms. Kinnunen and Earl Johnson ran the park alone, but back then they had more hands-on help from other volunteers. “Many of you probably did not know the original park workers like Gilbert Barker, Frank Coelho, Elsie Hopper, Mary Kessler, and my husband, Dr. Bob Davidson. These people were instrumental in starting things here — things like all the events, building the softball field, putting in electricity, erecting the pavilion and many other things,” Ms. Davidson said.

“When I joined the committee in 2007, I witnessed firsthand the dedication that Grace had for the park,” said Ms. Davidson. “She did everything, including cleaning the kitchen and the restrooms, which were in a lot worse state at the time.”

A friend to all

Ms. Kinnunen, she said, was friends with everyone who used the park except one group: unleashed dogs.

“She worked with 4-H, the horse people, the Potter League, Scouts, the Little League, the library, the Navy League, churches, schools, the Republican and Democratic committees, youth soccer, and everyone else who used the Glen through the years. She made sure the events were safe and appropriate for our town and the grounds were always pristinely neat and clean. Her efforts in keeping the vista open without commercial advertising on the softball fence or anything blocking it are something we should all be thankful for and try to preserve,” Ms. Davidson said.

Town Council member Dave Gleason read a proclamation on behalf of the council which praised Ms. Kinnunen’s leadership, inspiration and resourcefulness while overseeing the buildings, grounds and events at the park.

“Grace also maintained the records for Glen Park without any aid from modern technology, but when the time came to keep up with technology, she took it upon herself to learn how to use a computer,” said Mr. Gleason, reading from the proclamation.

When funding for the park was sparse, Ms. Kinnunen was its champion, he said.

“She recruited volunteers to accomplish different tasks and she never stopped advocating for Glen Park,” Mr. Gleason said. “Through her efforts, Glen Park has seen multiple improvements from a beautiful kitchen facility to new handicapped restrooms. Grace has given countless hours and many years to ensure that Glen Park functioned in the best way for the citizens of Portsmouth.”

Ms. Davidson thanked the members of the committee — especially Cyrus Gibson and Barbara Shamblin — along with the Department of Public Works for getting the permanent bench installed.

“Today we dedicate this beautiful bench in honor of Grace Kinnunen,” she said. “It is a small token for all that she has done, but we hope that she and many will enjoy it and always think of Grace when sitting on it.”

Ms. Kinnunen, in turn, thanked Ms. Davidson for her “loyal, constant help with the park.”

Afterward, Ms. Kinnunen said she was proud of her long involvement with Glen Park. “The park is a very important place for the people in our town,” she said.

And, she approved of the wording on the bench.

“I like the word ‘champion.’ Someone has to champion this.”