New Portsmouth youth center strives to 'be great for Nate' 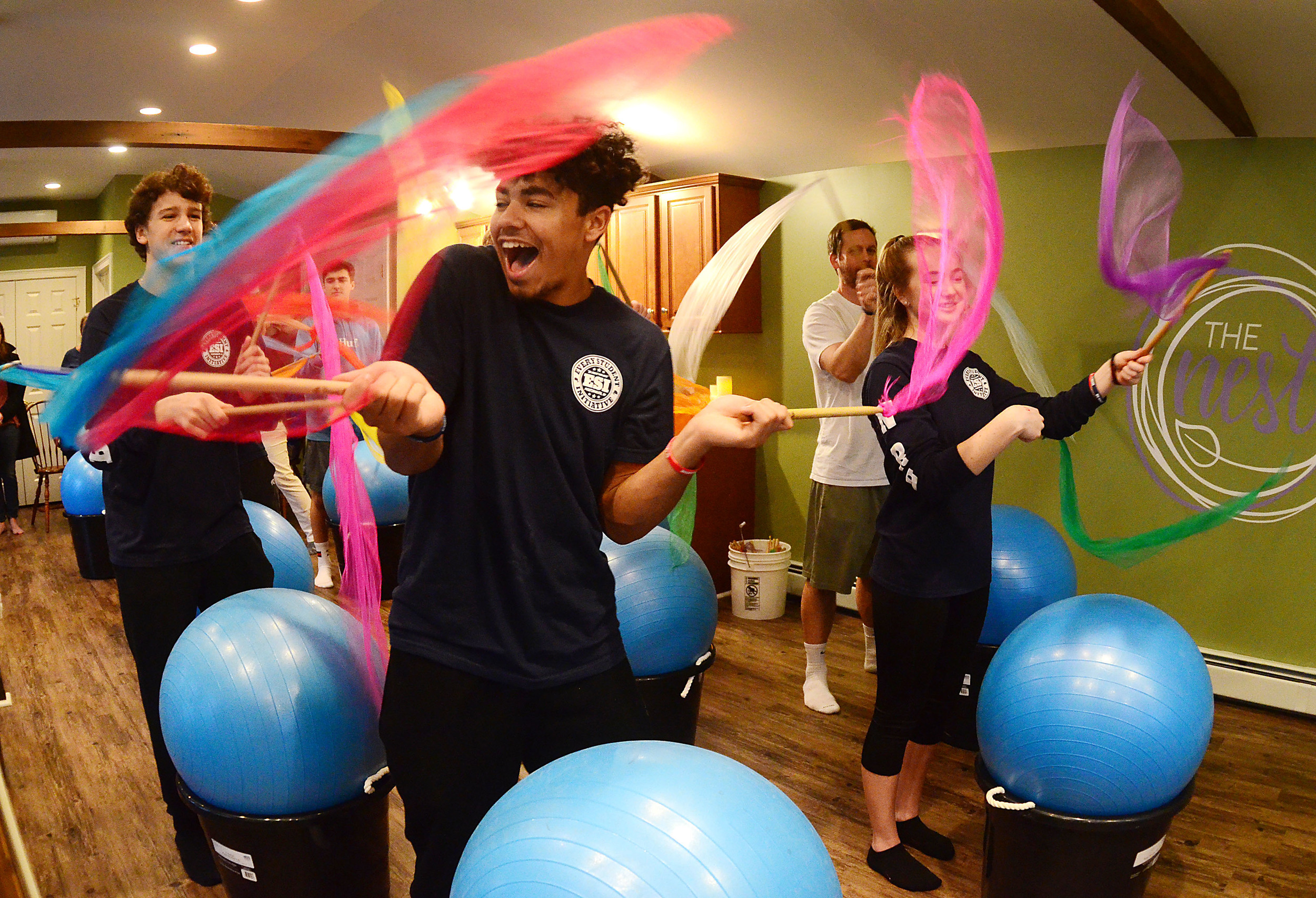 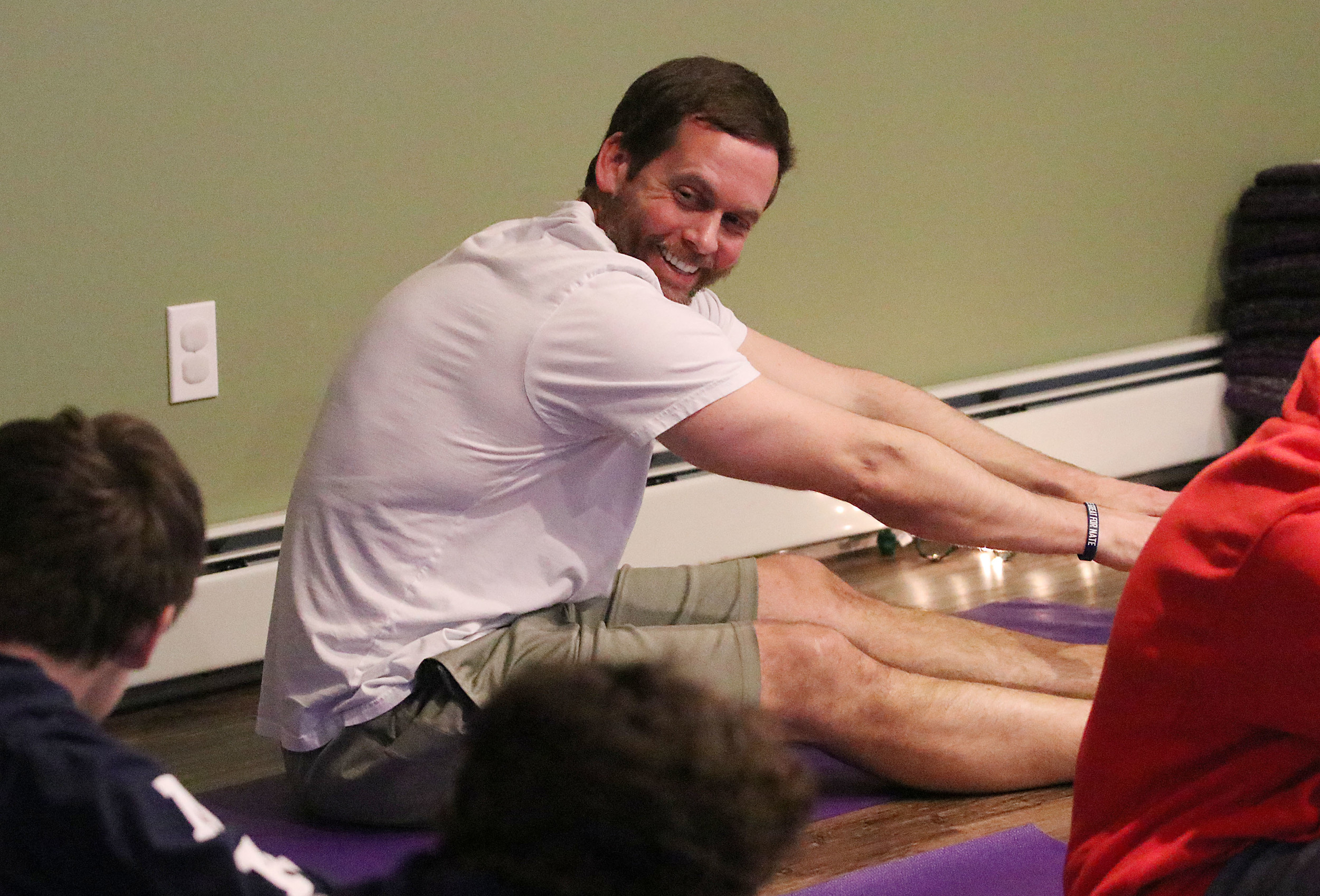 Rick Bruno, father of the late Nathan Bruno, laughs along with Nate’s friends during a yoga and mindfulness class at The Nest at Tenth Gate Yoga Saturday afternoon.
Richard W. Dionne, Jr. 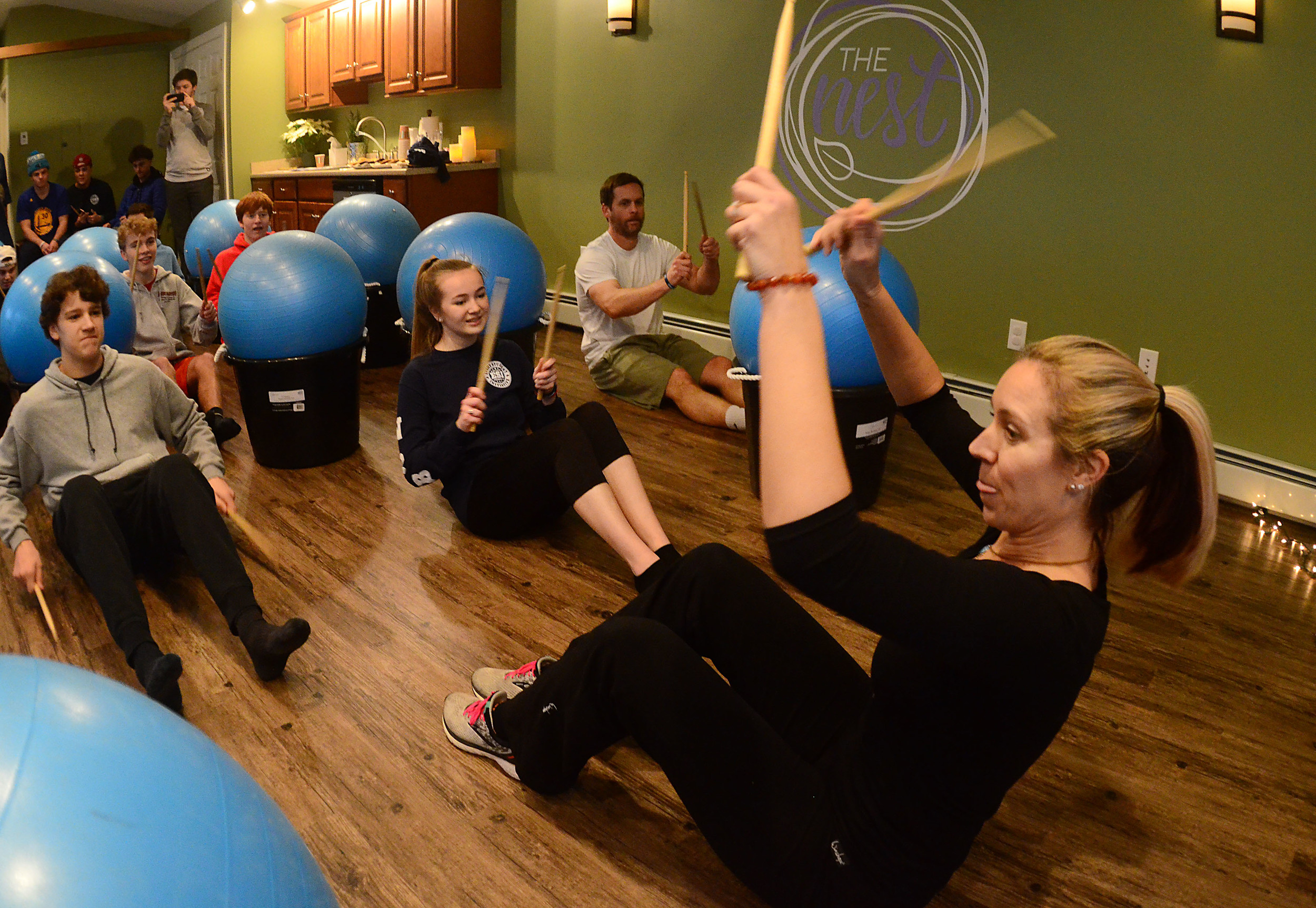 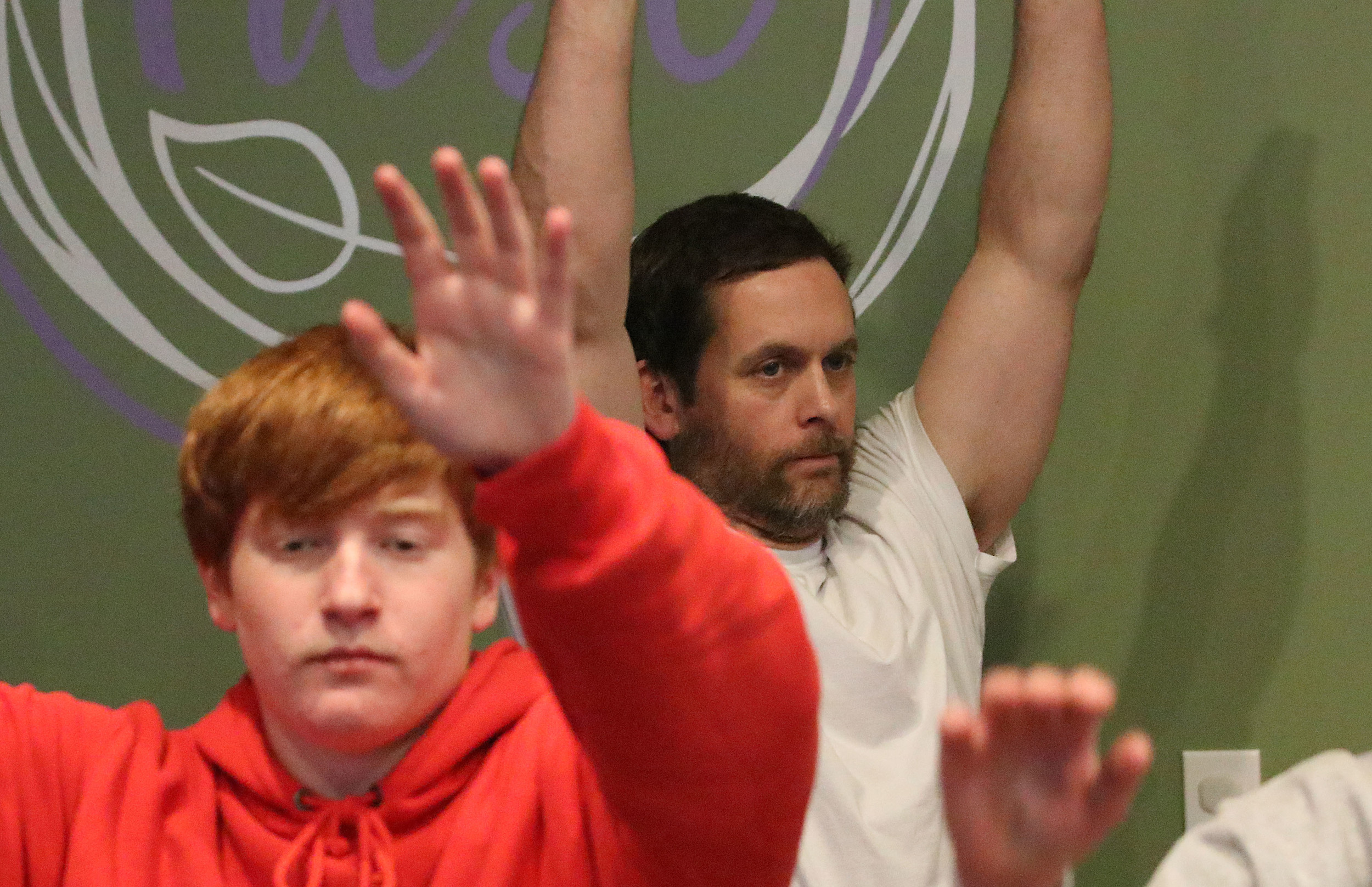 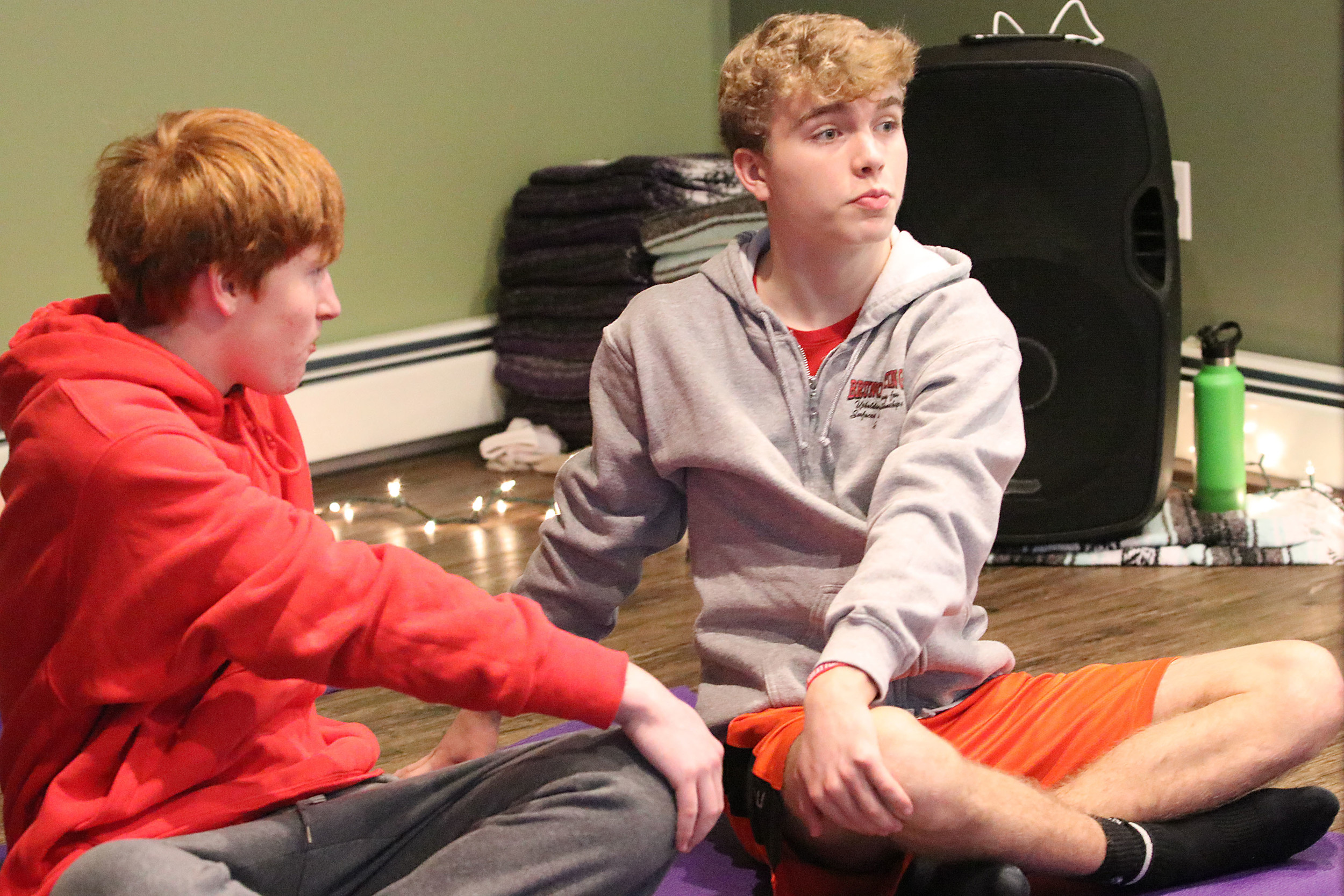 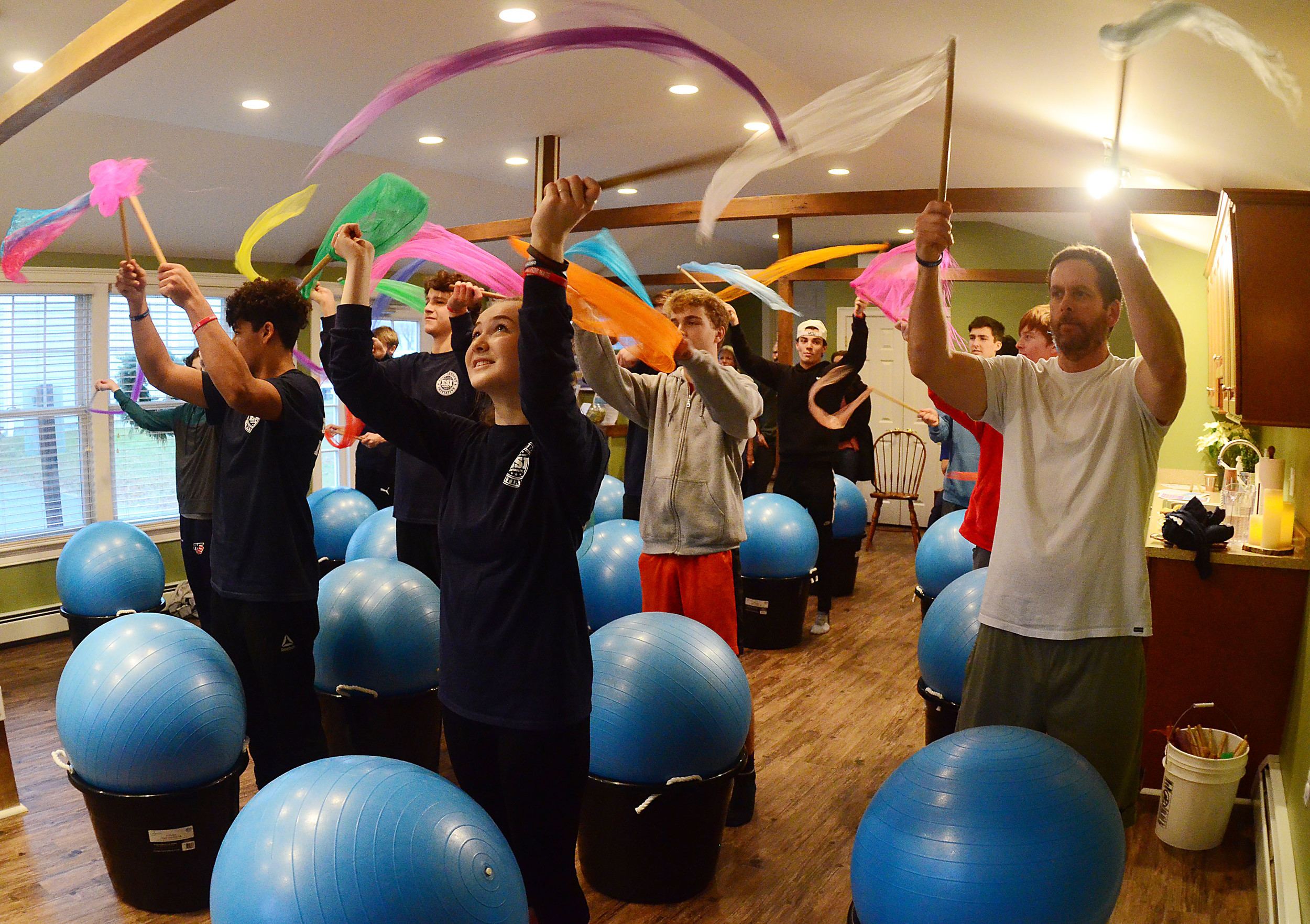 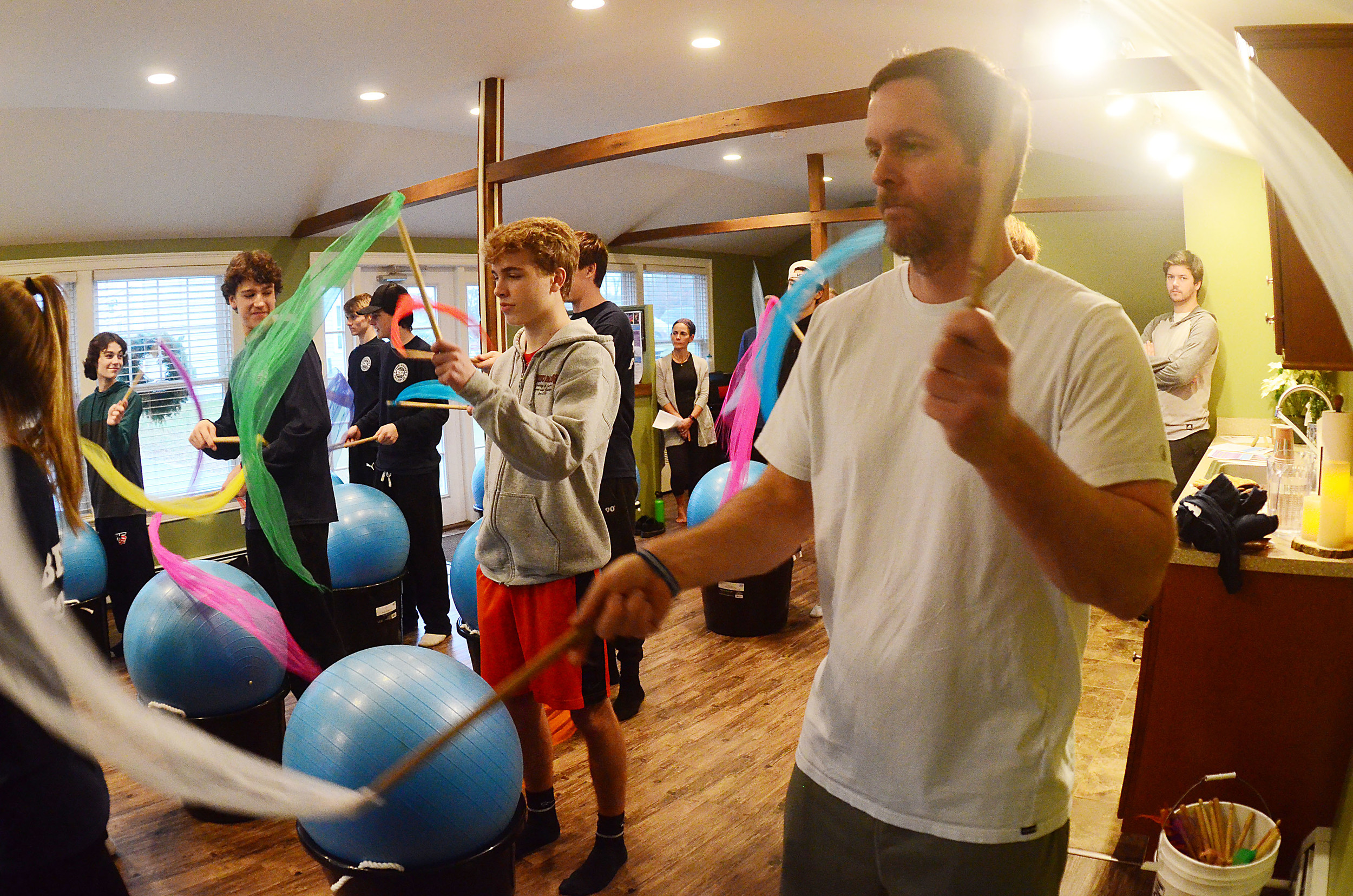 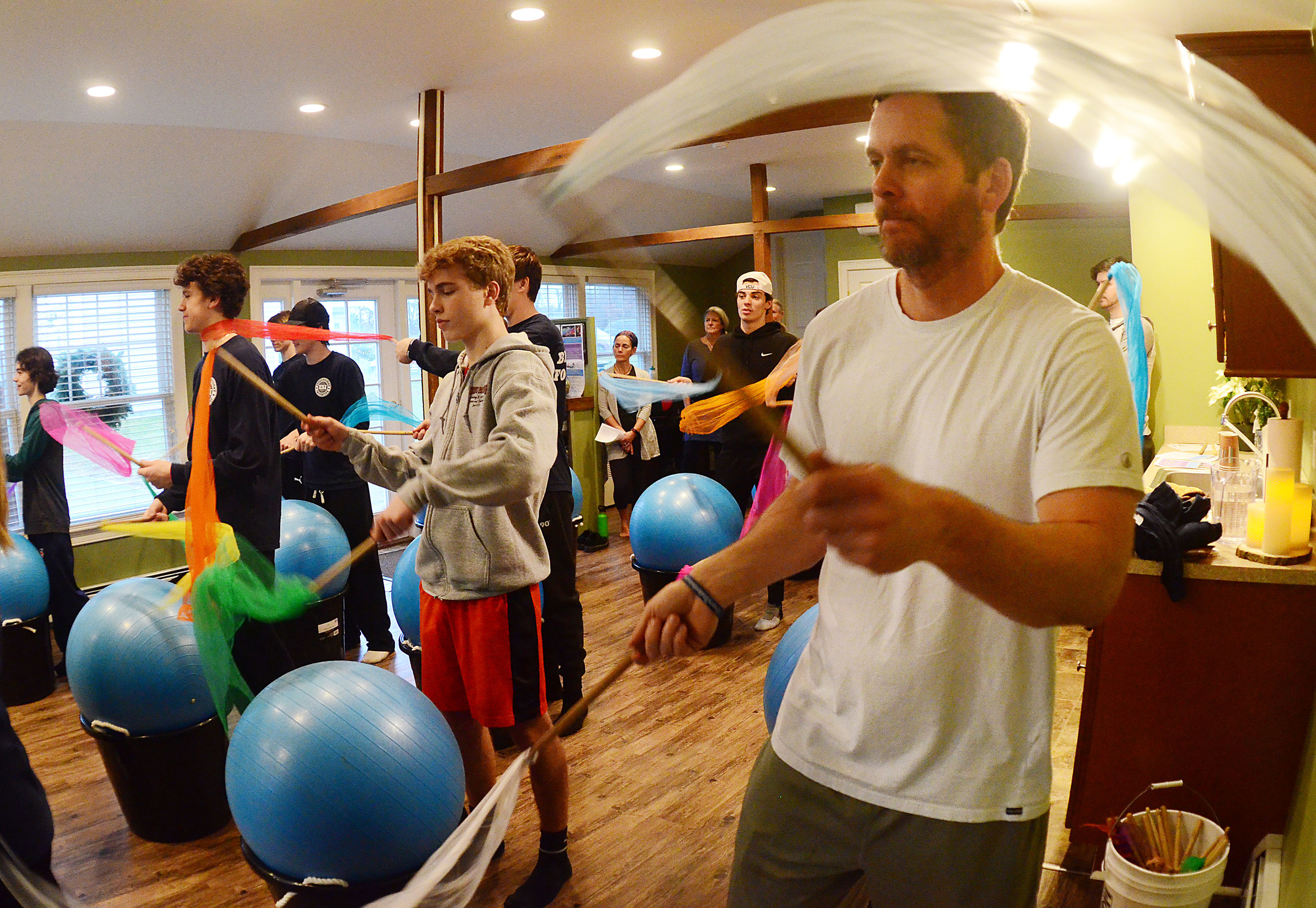 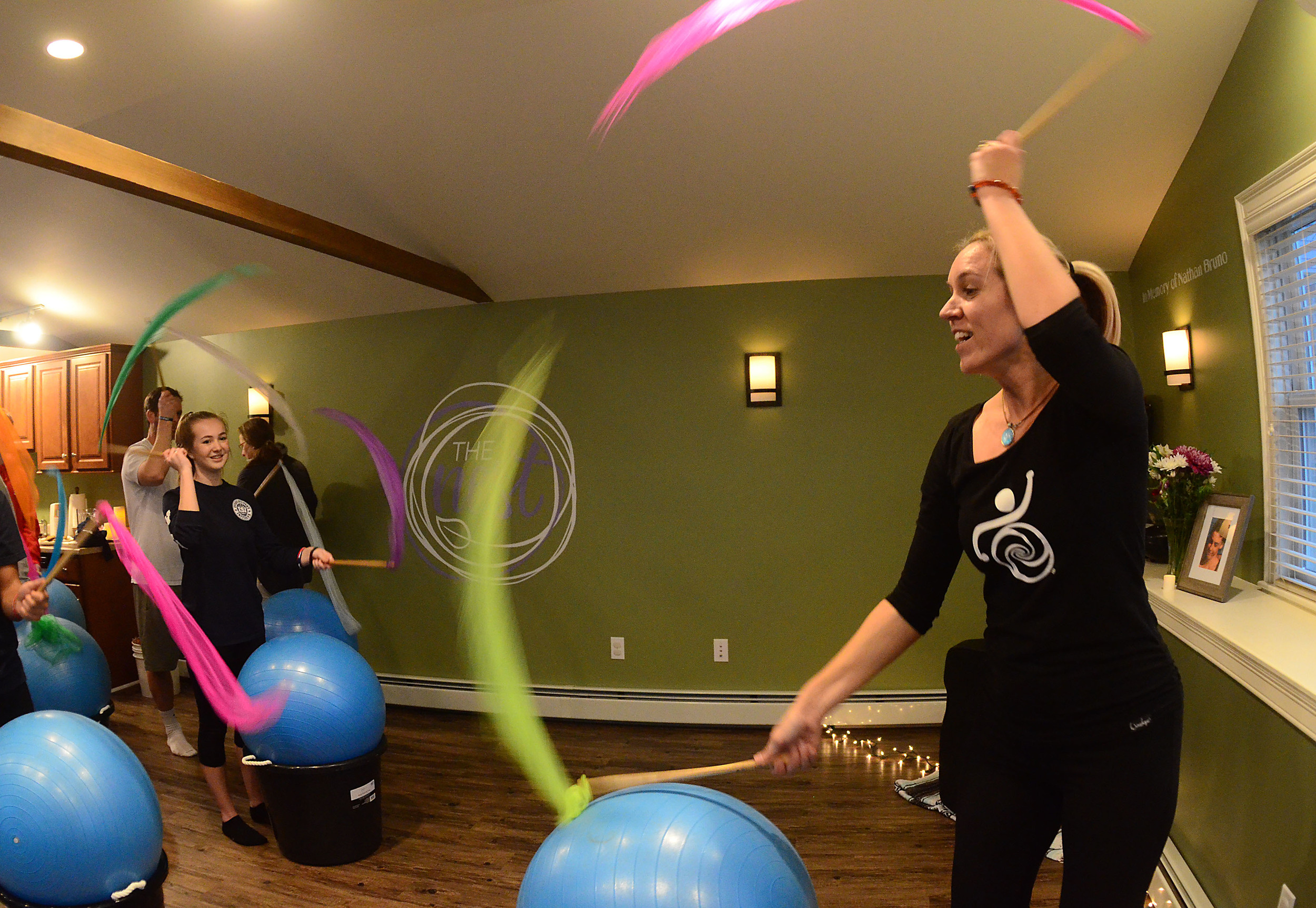 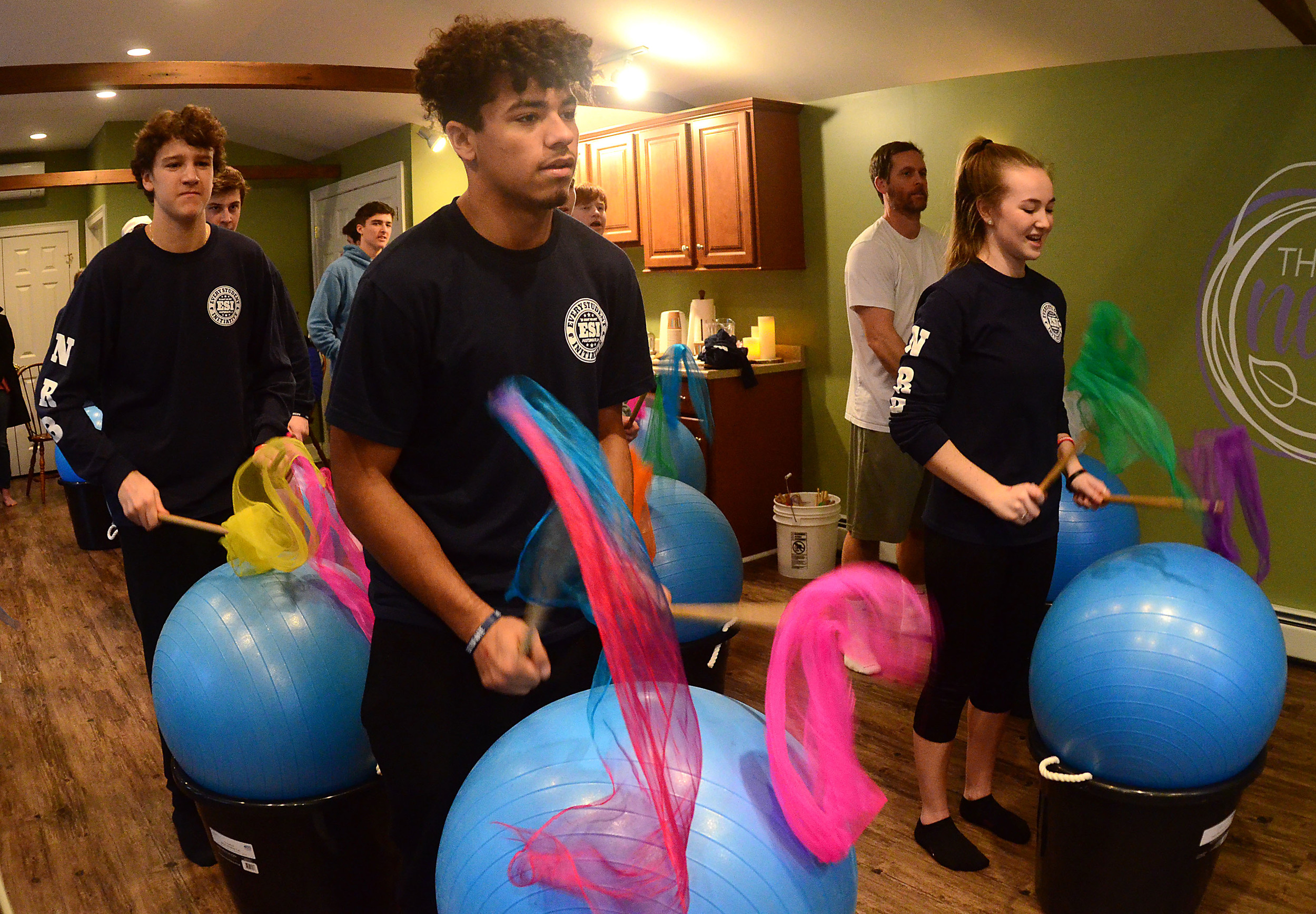 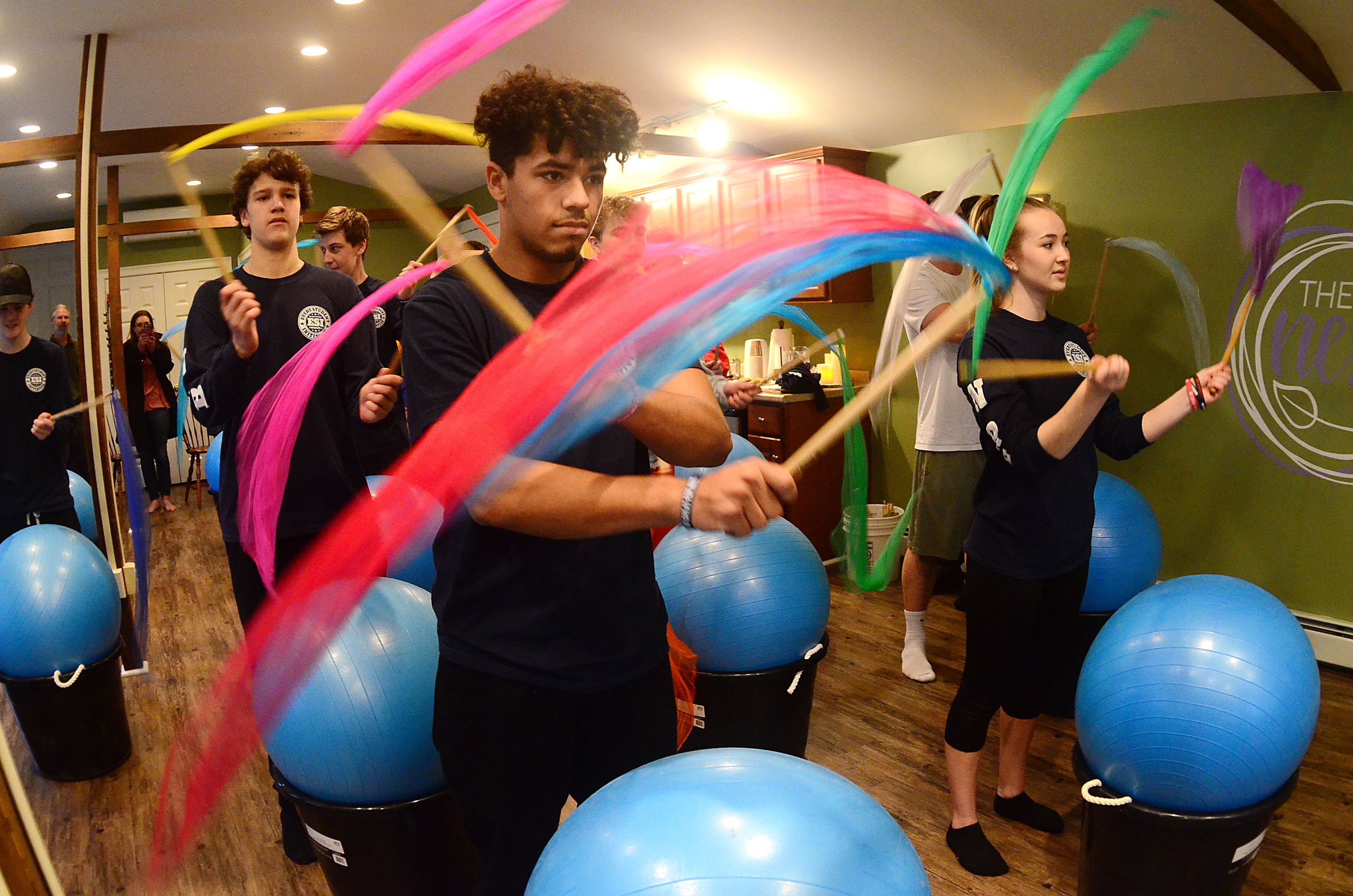 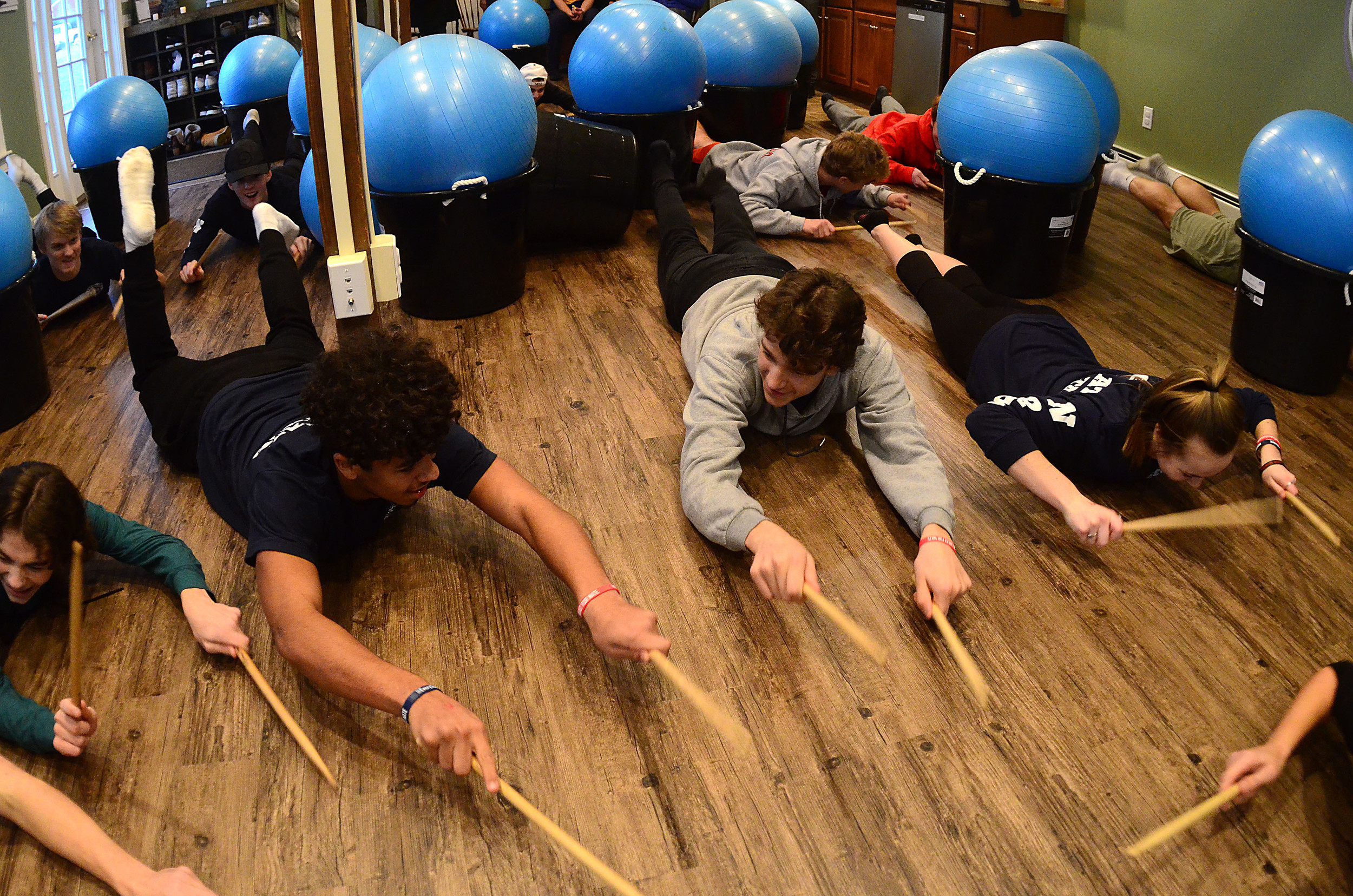 It’s so fitting how much laughter and light will fill The Nest, because that was Nate.”
Lynda West, yoga instructor at Tenth Gate Center for Yoga and Meditation
By Kristen Ray

PORTSMOUTH — For the last decade, Tenth Gate Center for Yoga and Meditation has been a fixture in the Portsmouth community, striving to provide patrons with a holistic escape from life’s daily stressors.

Now, founders Reinette Fournier and Tom Speare are aiming to share that same philosophy with the town’s younger population through the grand opening of The Nest, their new community youth center dedicated in the memory of the late Nathan Bruno.

With the former Portsmouth High School student in mind, members of Every Student Initiative (ESI) and Nathan’s father, Rick Bruno, gathered on Saturday for The Nest’s ribbon-cutting ceremony and inaugural event, experiencing firsthand the benefits movement and breath can have in relieving stress.

Sometimes, acting on a single gut feeling can lead to extraordinary results. That was the case for Ms. Fournier this past September, during a moment of meditation.

She had always dreamed about taking over the vacant 800-square-foot building just behind their main studio at 1046 East Main Road, but the financial burden such a move could create always stopped her. On that particular day, however, that fear became irrelevant.

And so she and Mr. Speare did, later deciding to transform what had once been an old chicken coop into a safe haven for children and teens up to age 18. With programs such as Kundalini-inspired yoga and “Zumbini: Music and Movement” encouraging self-expression and stress management, Ms. Fournier hopes The Nest will fill what she perceives as a massive void in the community.

“We need to do something for the kids here, because they’re checking out,” she said.

Once instructor Kimberly Ferrara — she’s trained in courses such as “Laughter Yoga,” “Drums Alive” and “Creative Relaxation” — was appointed as the center’s program director, Ms. Fournier called on Mr. Bruno, a student of hers and owner of Bruno Painting, to do some work for The Nest.

As they stood inside the center together one day last fall, Ms. Fournier once again had a moment of clarity.

“I said to him, ‘I want to dedicate this to your son,’” she said, “‘and I want it on the walls so that every day, when I come in, it will remind me why we’re doing this.’”

Mr. Bruno happily obliged, painting the slogan “Be Great for Nate” at the very front of The Nest.

Being great for Nate

After a successful GoFundMe campaign and donations made by Mr. Bruno and his team alleviated the financial stress Ms. Fournier had previously been experiencing, The Nest was officially ready for business after he new year.

To christen the space, Tenth Gate welcomed the members of ESI — a group of students who came together after Nathan’s death nearly a year ago and advocate for more social emotional support resources in their community — to participate in a class in honor of their friend.

With Mr. Bruno joining in alongside them, ESI members were guided through an energizing “Drums Alive Street Beats” routine, led by Ms. Ferrara, and a calming Hatha yoga and meditation session, led by Lynda West. Though it was many of the students’ first time participating in either program, Owen Ross, president of ESI, said he would be open to doing something like that again.

“We were very active and then they kind of just settle you down and stretch you out, so it’s a great combination,” he said.

Mr. Bruno said it’s been inspirational to witness the hard work ESI members have been doing since his son’s passing — as well as having them by his side Saturday.

“Especially in my weakest times, they’ve just been a great support,” he said.

ESI members’ dedication and commitment to their friend impressed those at Tenth Gate as well. In her dedication, Ms. West shared how similar she felt each of their missions were to one another, and how it was only appropriate that The Nest would now serve as their common ground.

“It’s so fitting how much laughter and light will fill The Nest, because that was Nate,” she said.

To learn more about Every Student Initiative, visit www.everystudentinitiative.org. For a full list of classes available at The Nest, visit www.tenthgateyogacenter.com.