The move up to Division I has been difficult for the Mt. Hope tennis team who are now 3-4 on the season after losing to Barrington 6-1 on Monday afternoon. Last season the Huskies were the Division … 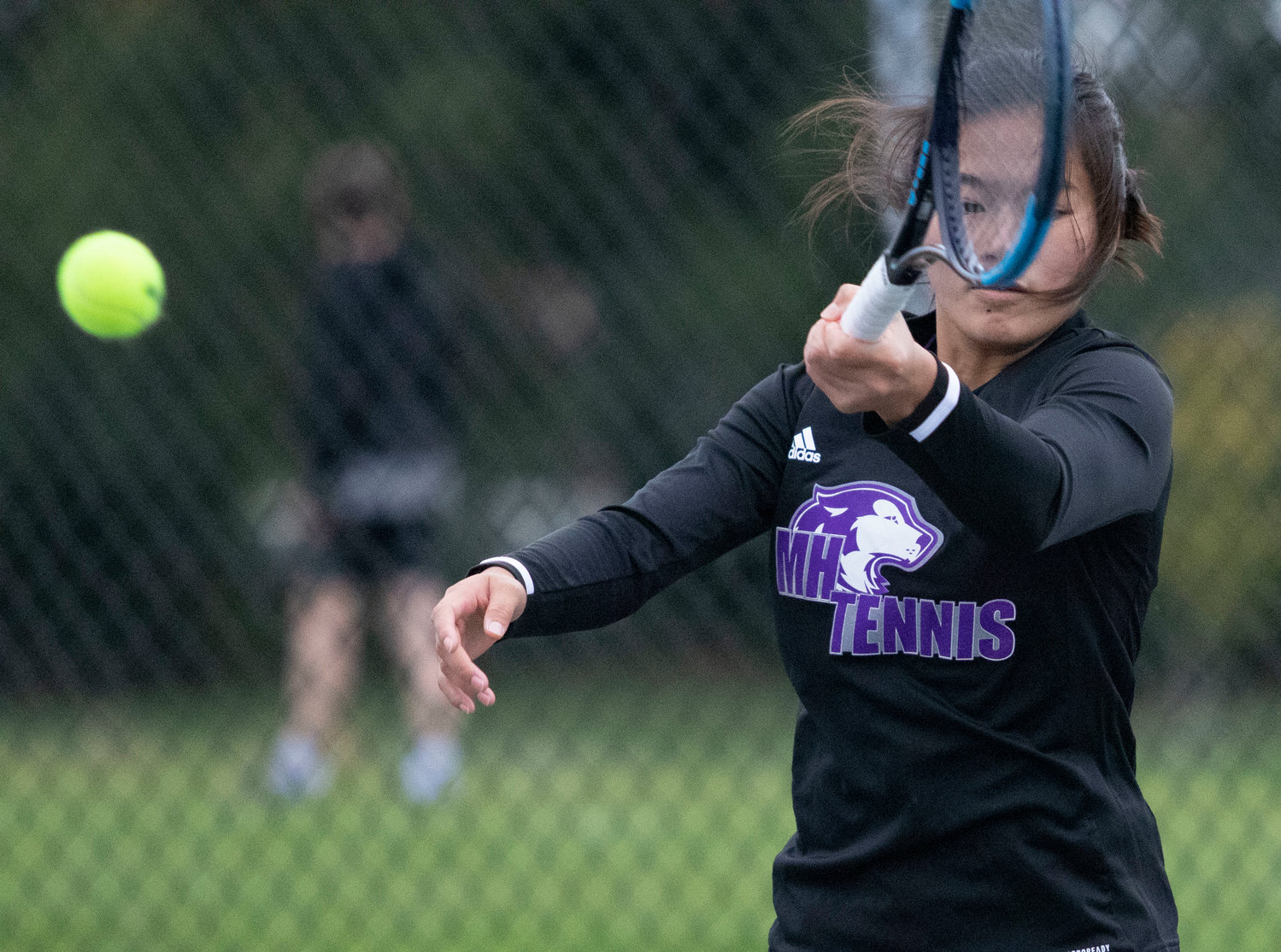 First singles player Elsa White hits a forehand/backhand during her match against Sonya Pareek of Barrington. She won the match, 6-1, 6-3, and is currently 6-1 on the season.
Photos by Richard W. Dionne, Jr. 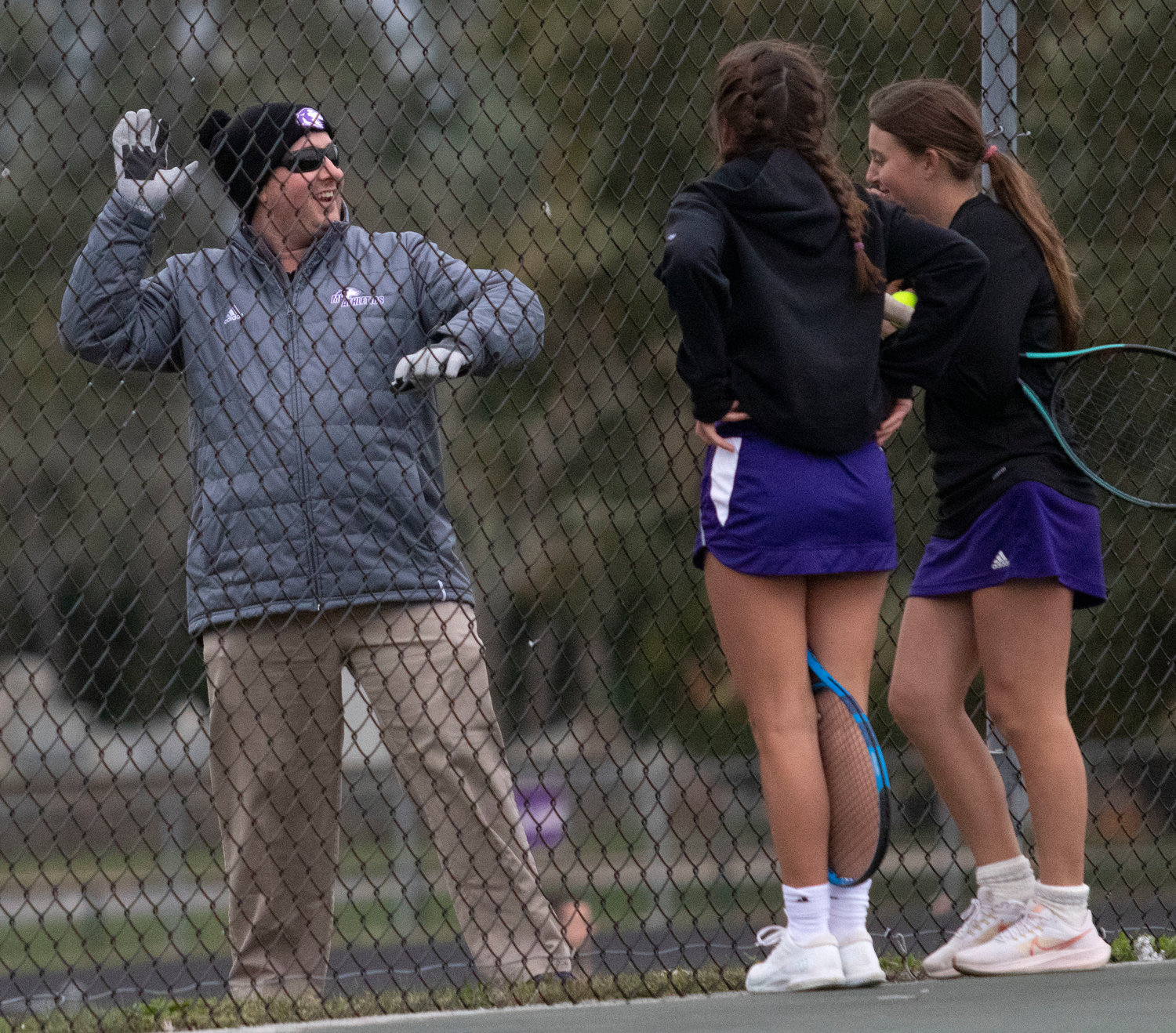 Head coach Geoff Keegan speaks to a doubles team during their match against Barrington on Monday. He has kept the team upbeat and positive as they compete in Division I. 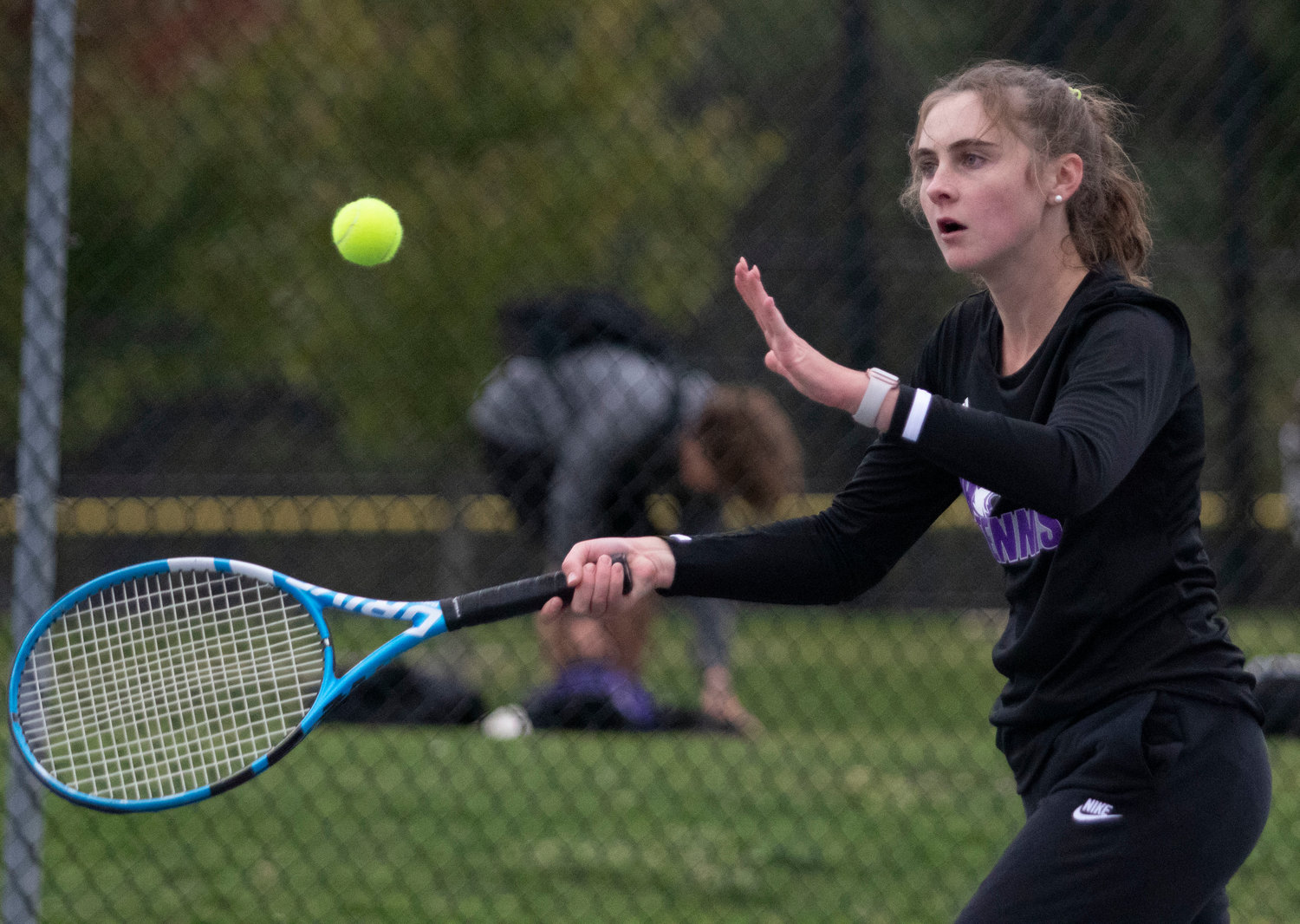 Junior captain Ella Quesnelle hits a volley during her match against Ava Koczera-Kasem of Barrington. 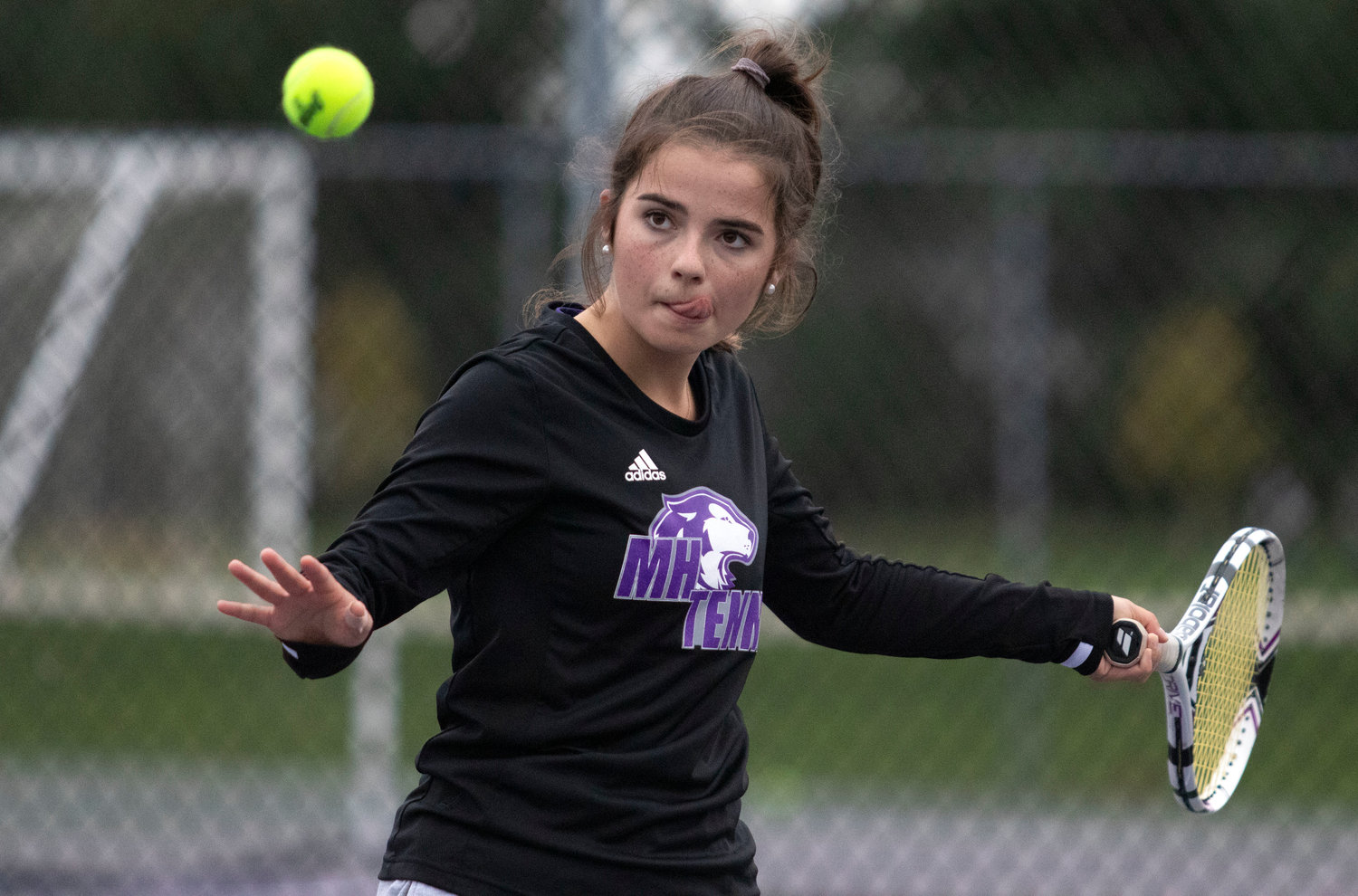 Senior captain Zelda Hayes hits a forehand during her match against Charlotte Danyla of Barrington. Hayes is 5-2 on the season. 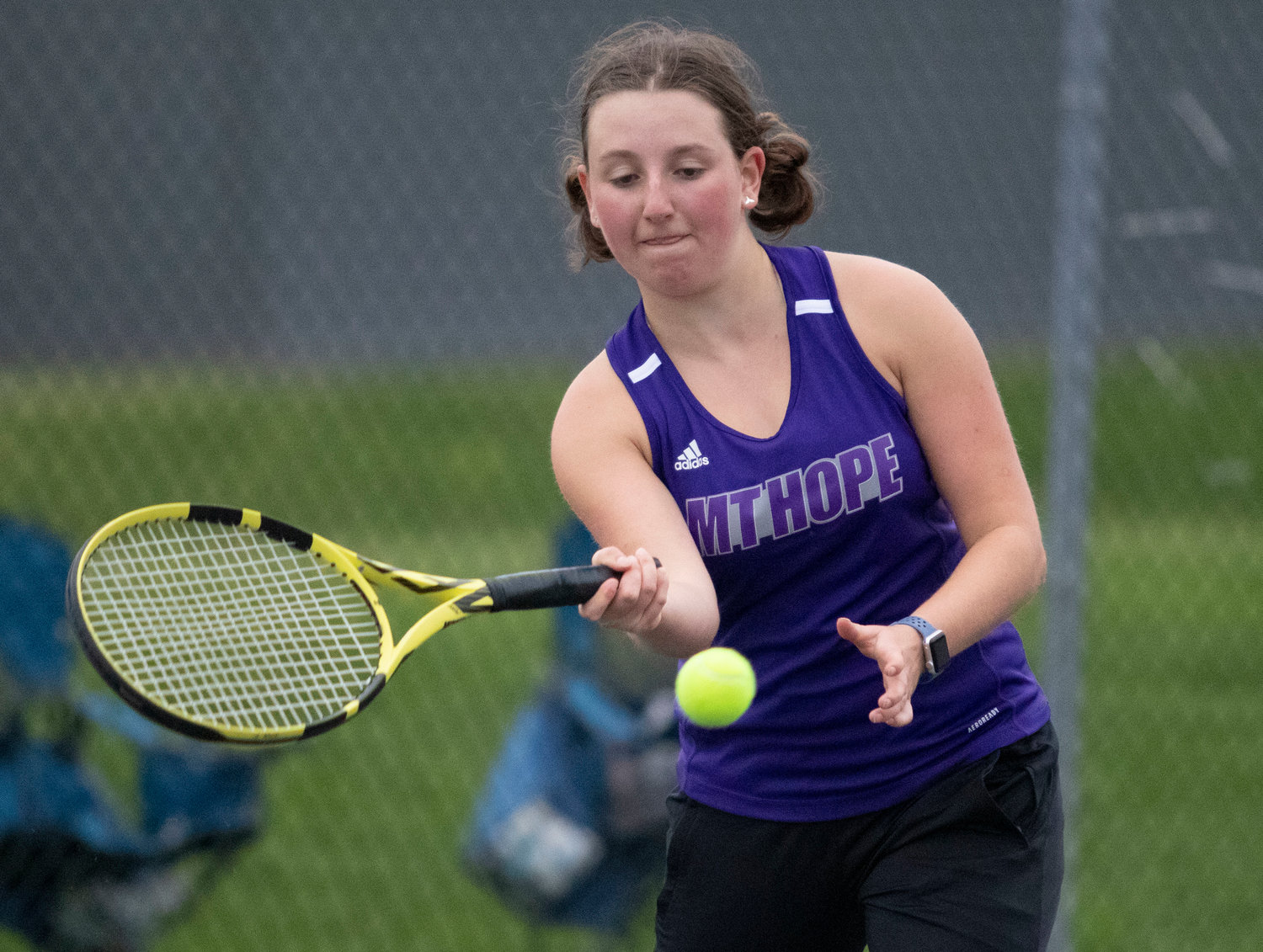 Junior captain Cate Merriam hits a forehand during her match against Katie Byon of Barrington. 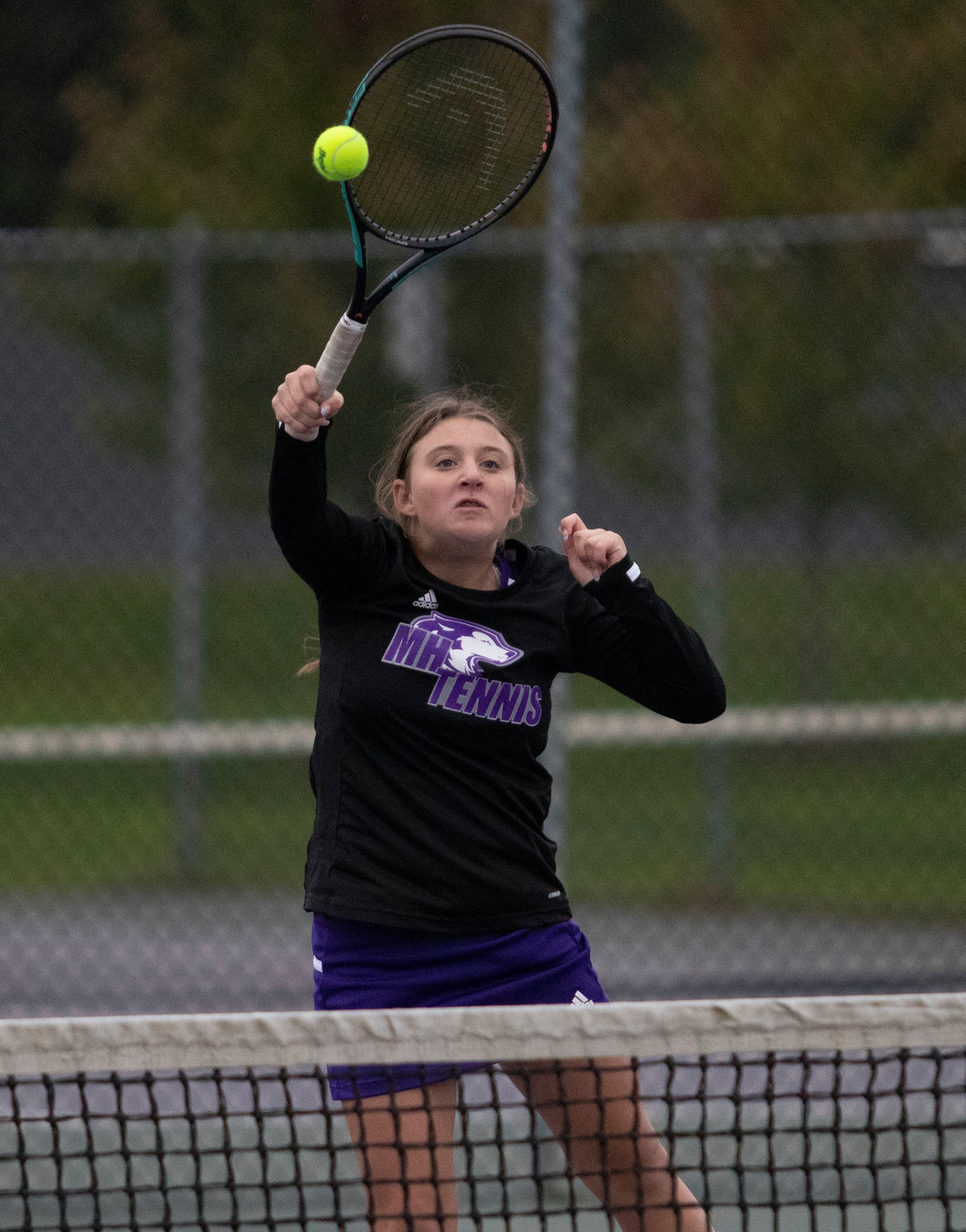 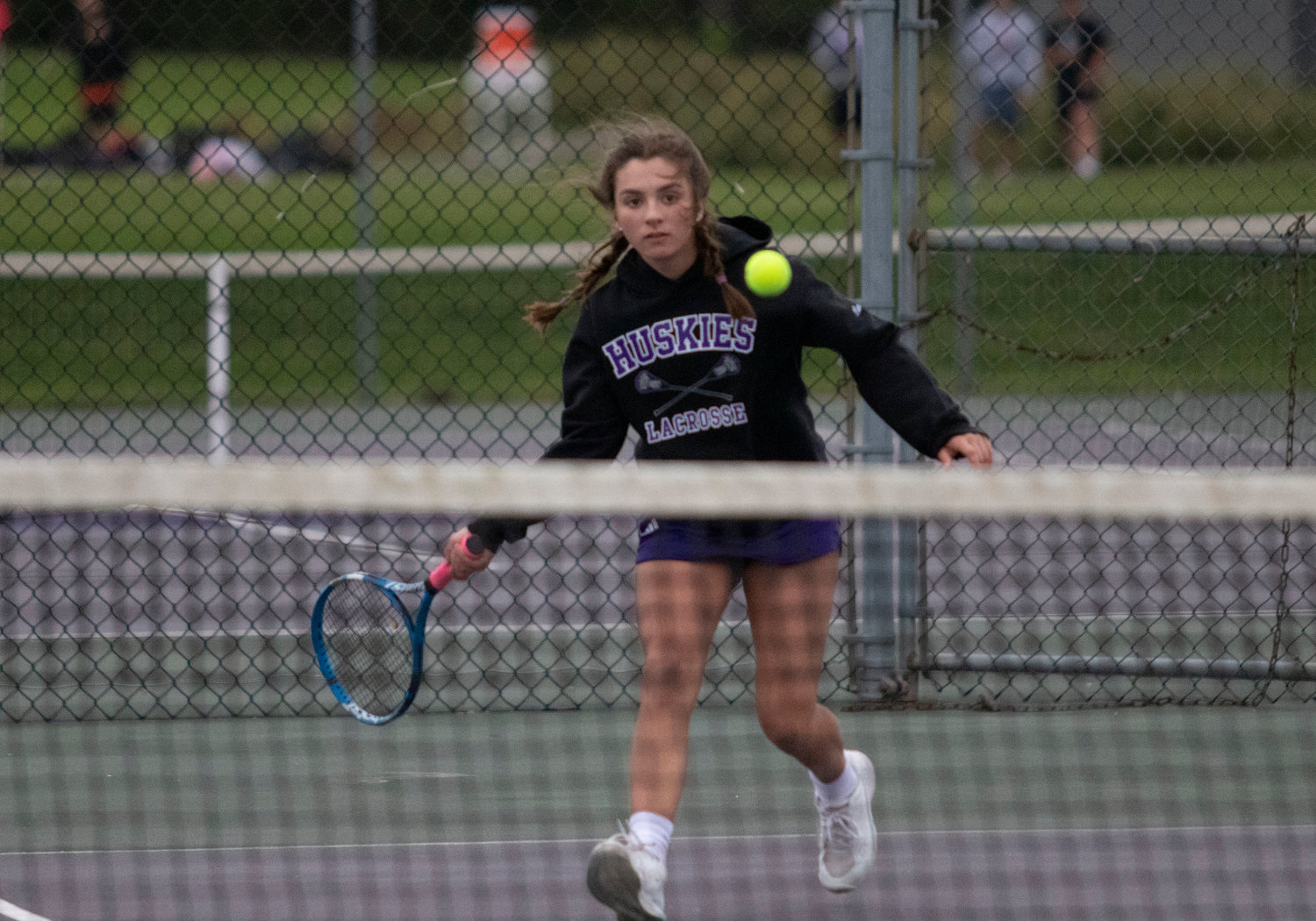 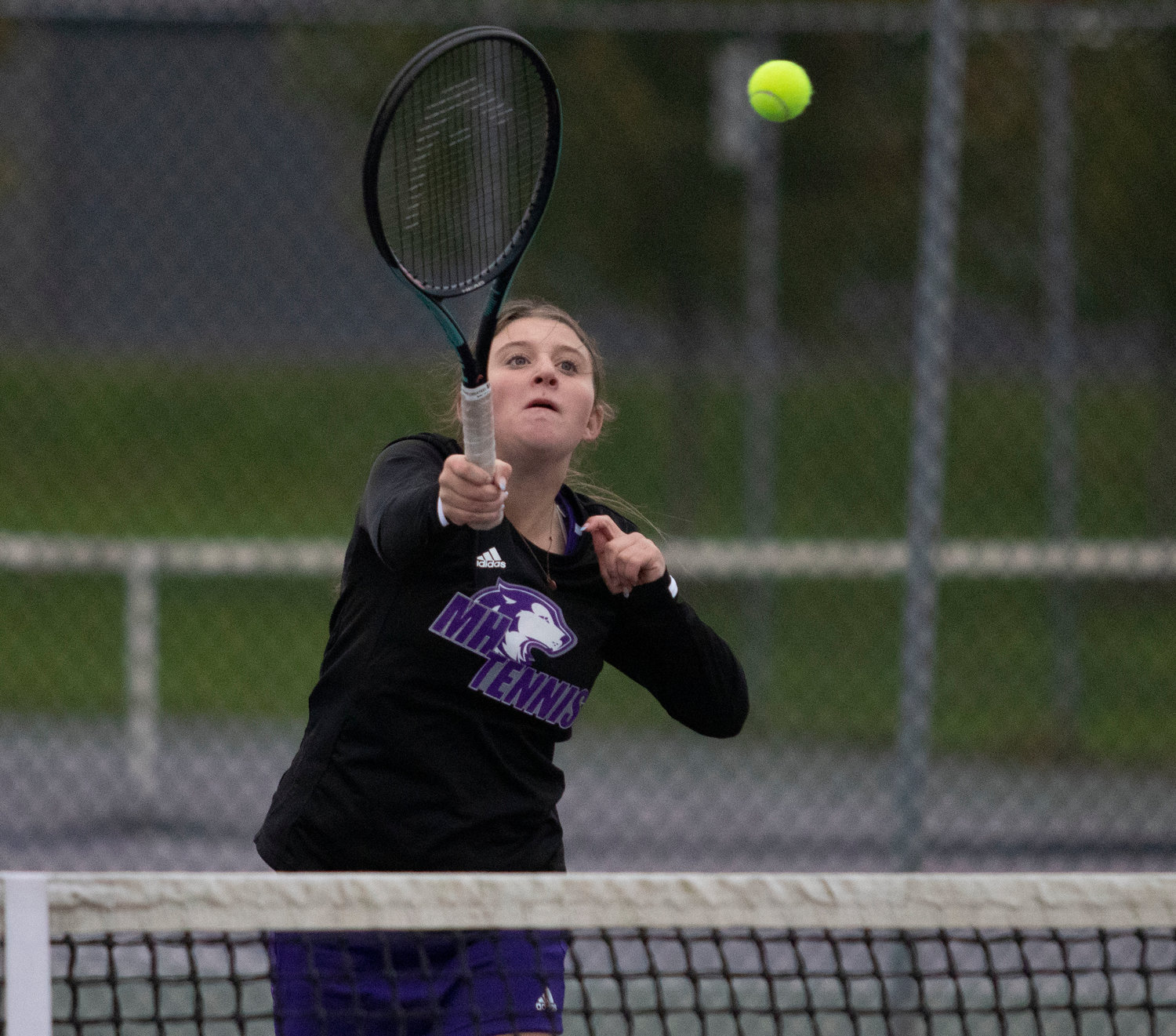 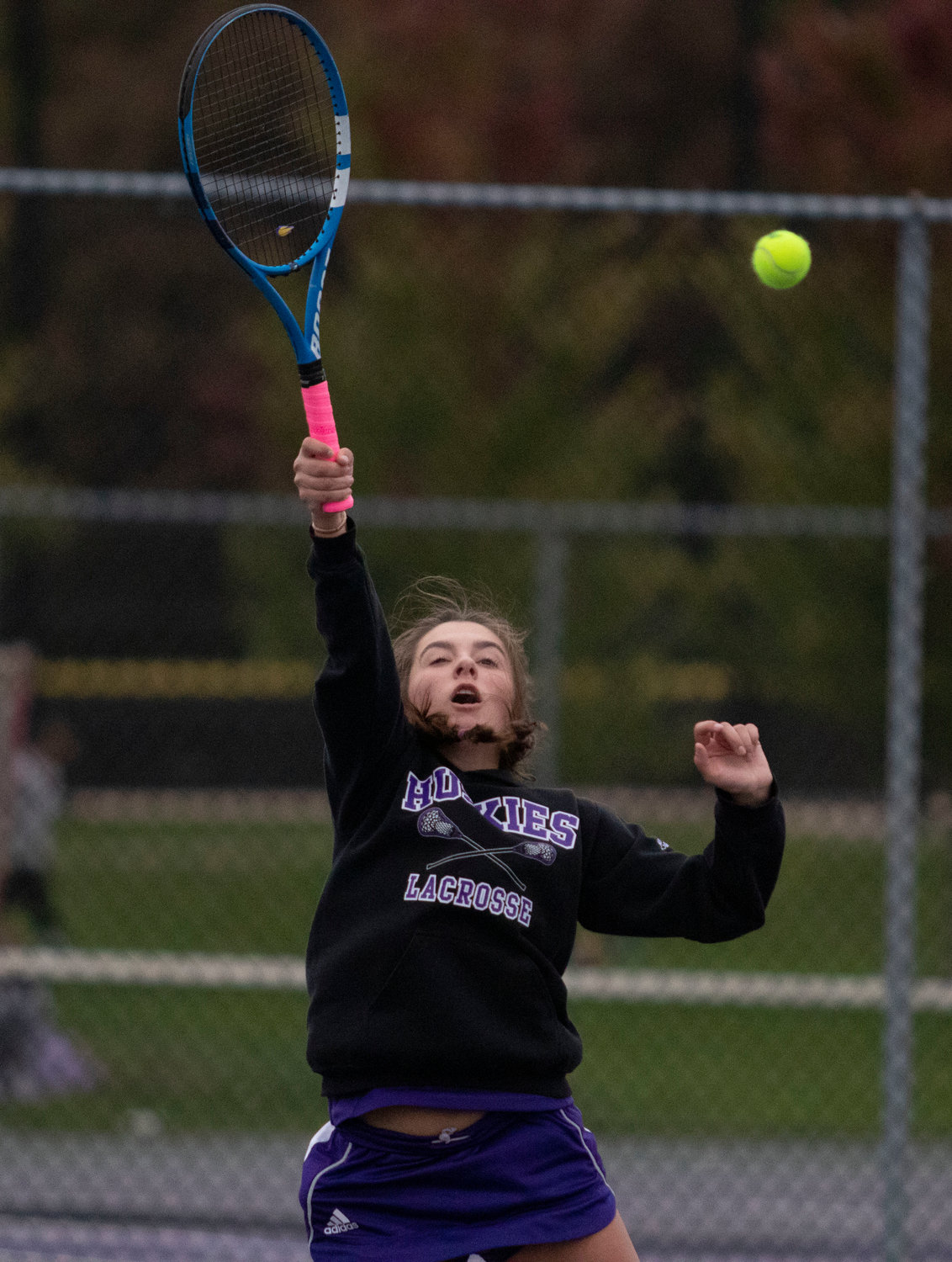 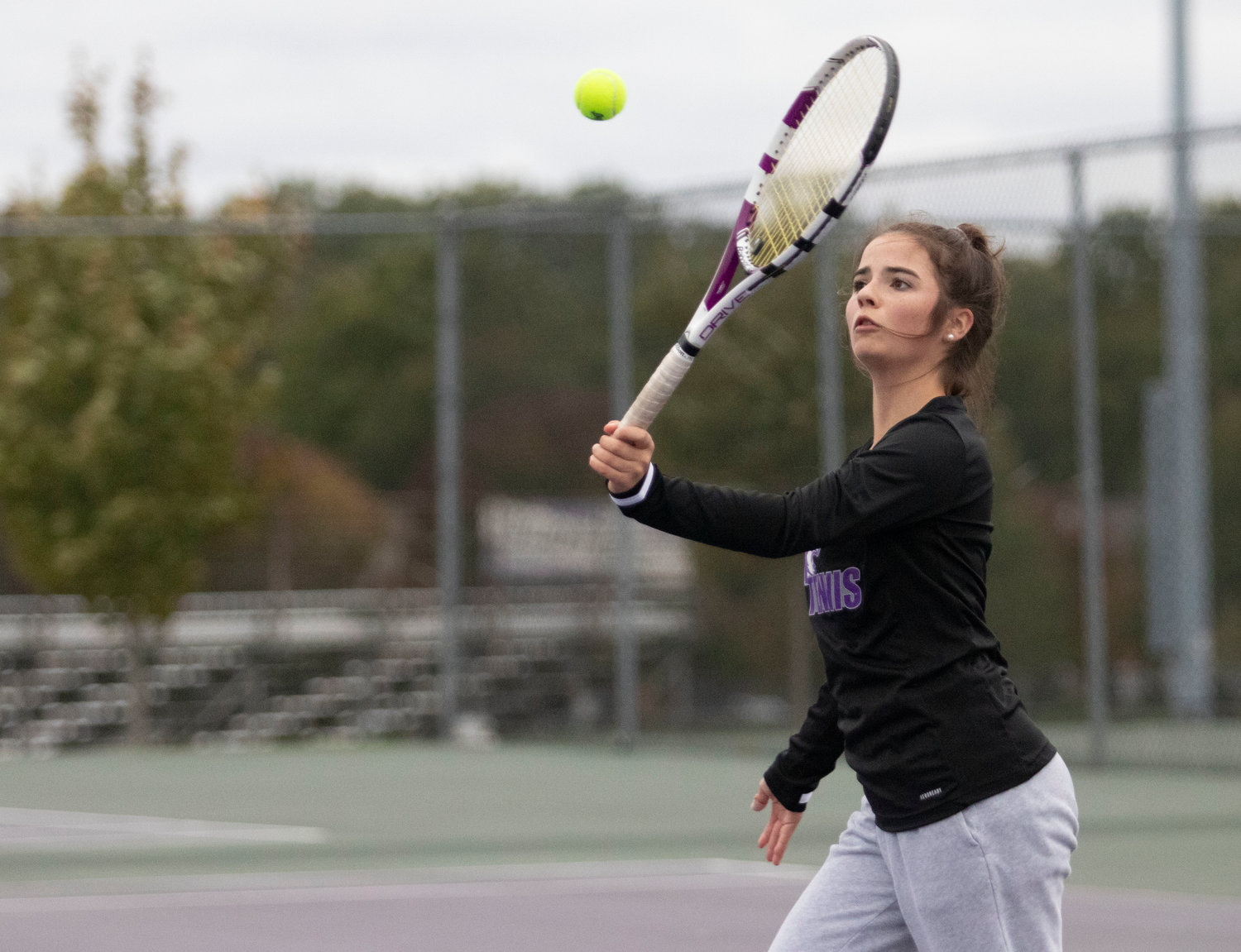 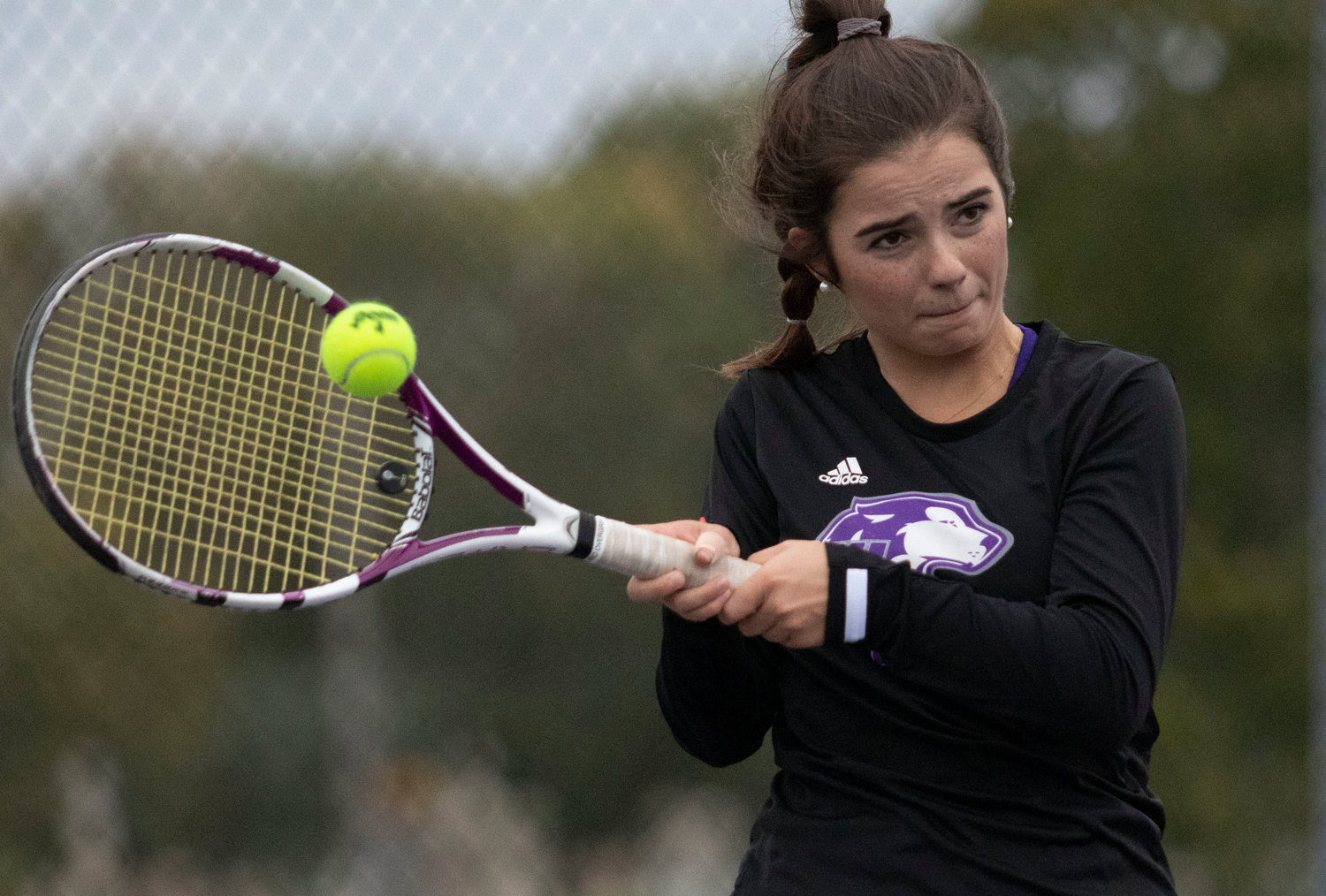 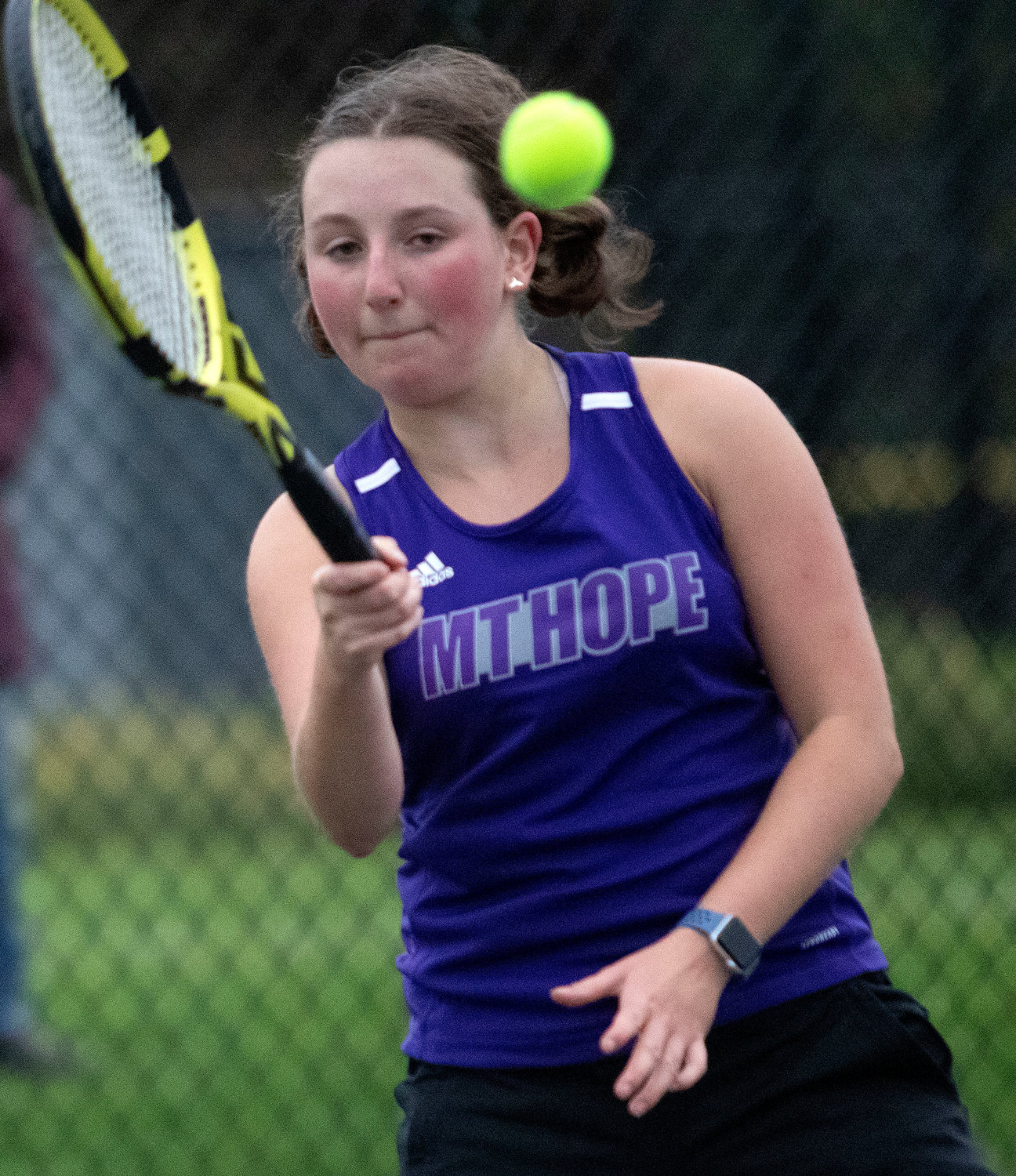 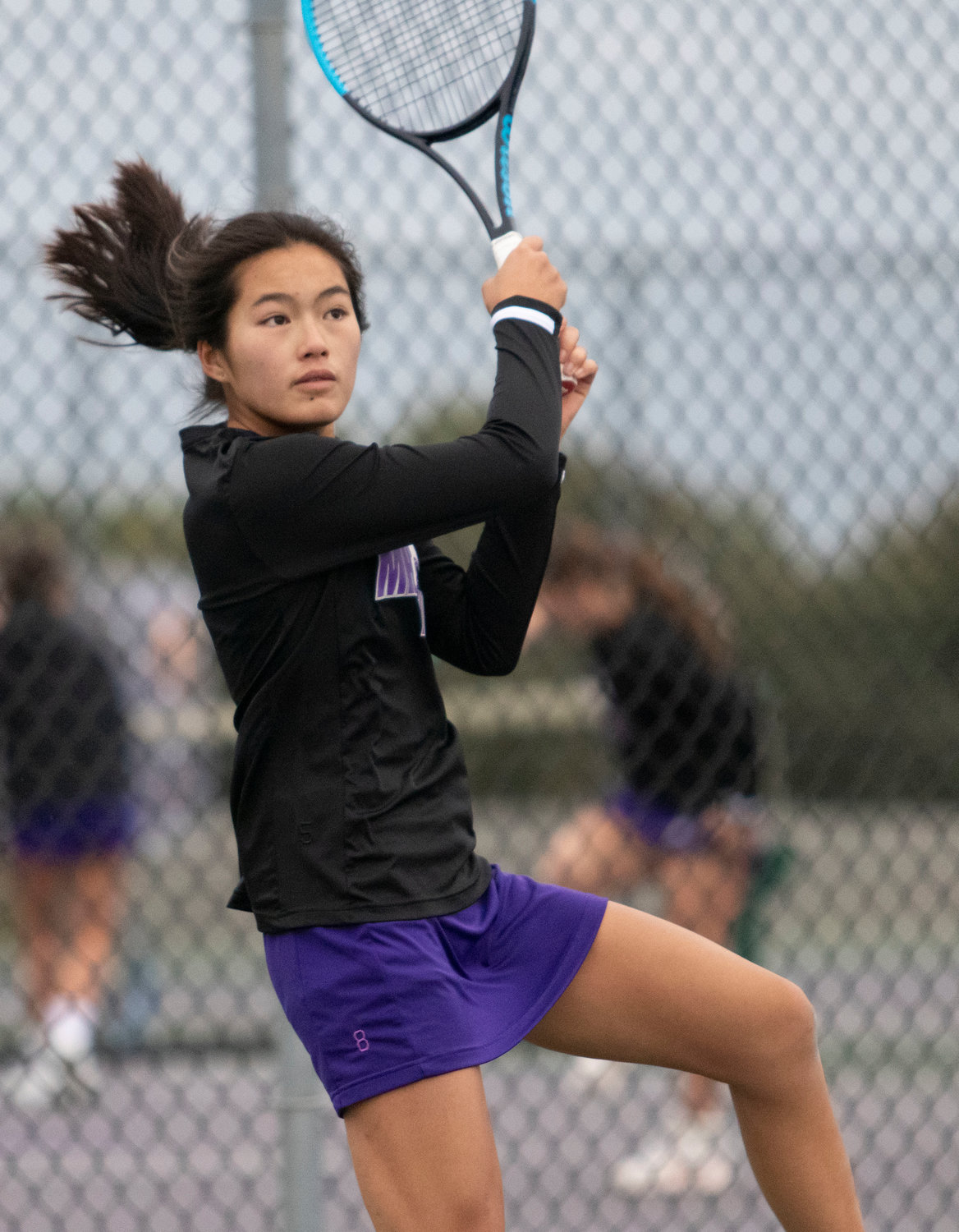 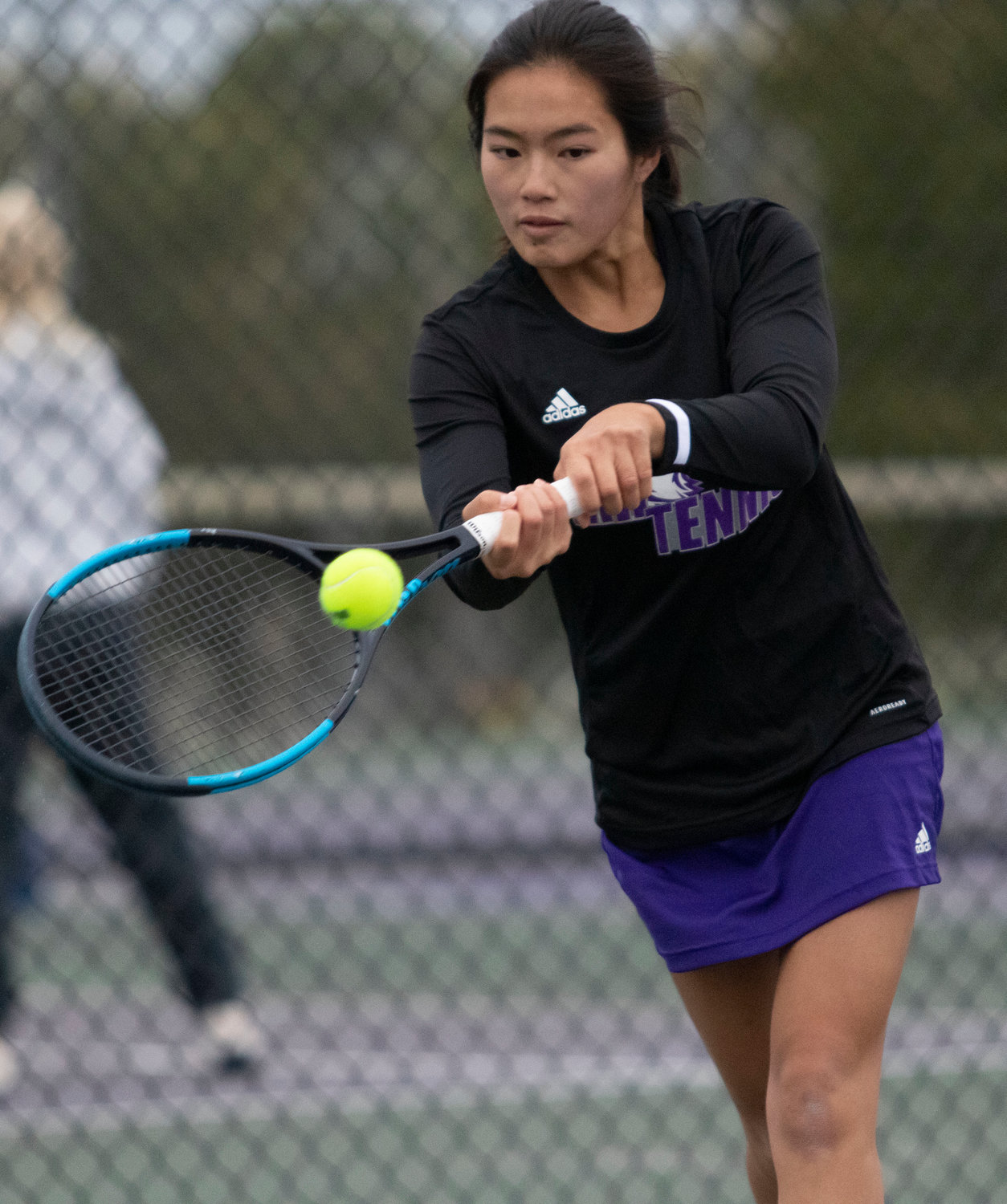 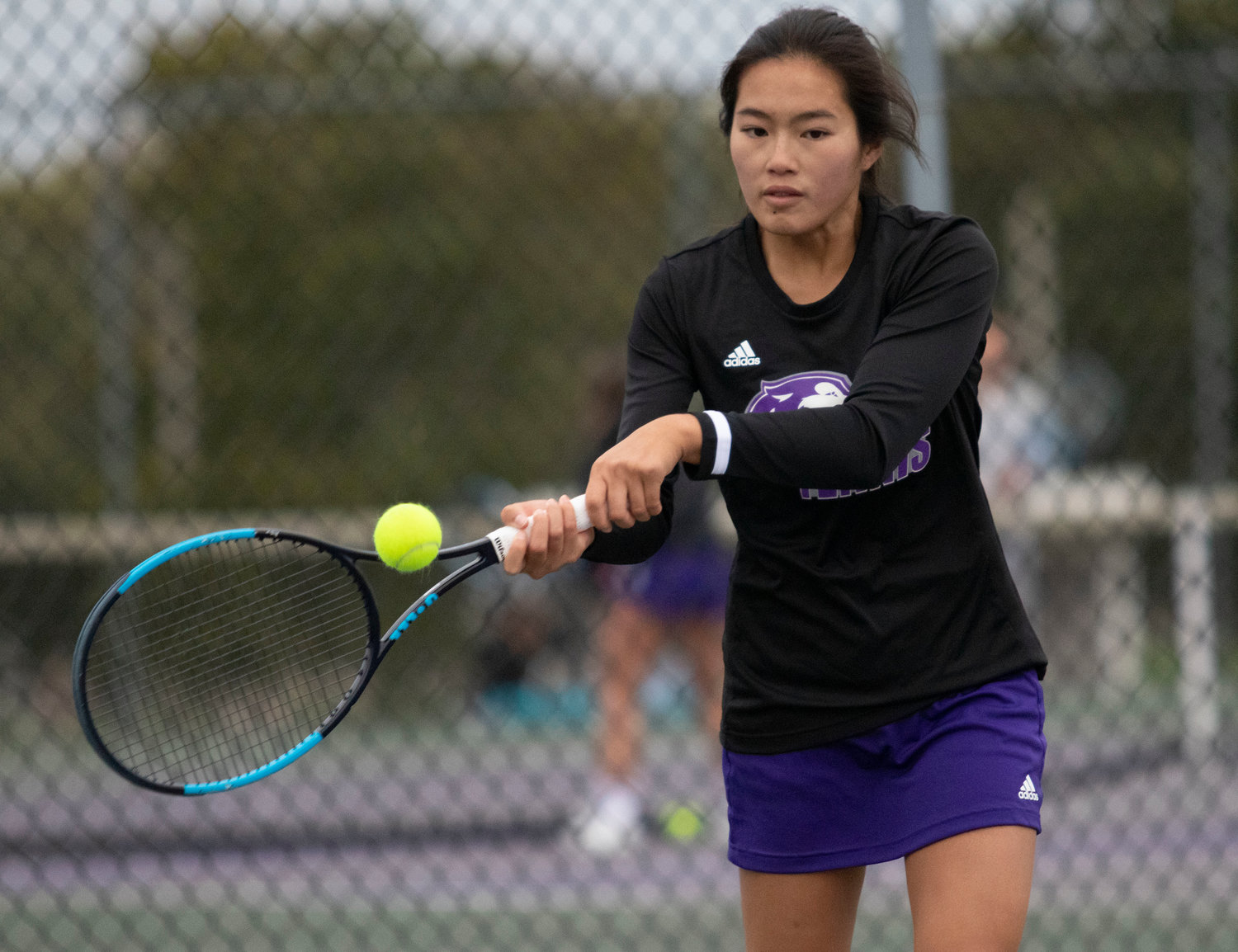 The girls are rising to the challenge. And that’s awesome. That’s always the worrisome part. But they are making the best of the situation and bringing it, every match.”
Huskies head coach Geoff Keegan
Story and photos by Richard W. Dionne, Jr.

The move up to Division I has been difficult for the Mt. Hope tennis team who are now 3-4 on the season after losing to Barrington 6-1 on Monday afternoon. Last season the Huskies were the Division II runner-ups and had competed for the title the last few years. That status will be difficult to match in their new division.

“The girls are rising to the challenge,” said Huskies head coach Geoff Keegan. “And that’s awesome. That’s always the worrisome part. But they are making the best of the situation and bringing it, every match.”

First singles player Elsa White has been dominating her opponents and is 6-1 on the season. The ultra quick junior has improved her ground strokes, adding power and topspin as well as working on strategies to thwart her opponents. She has also enhanced her deadly left handed serve with more spin and pace and can paint the lines with powerful passing shots. “It’s a lot more competitive,” White said of her competition. “The rallies are longer, you have to be very focused.”

White rose early during the summer mornings to work on her play and participated in various clinics to boost her knowledge of the game. “I came into the season seeing the challenge, but in the end, I just decided to have fun,” she said.

“Elsa has been doing very well,” said Coach Keegan. “She has qualified for the individual state tournament as the fifth seed in the state. She is a hard worker and a great player.”

The rest of the team has had mixed results against their Division I foes, but are holding their own and staying positive. “We are shooting to be .500 and so far it’s been a seesaw, but I think that’s where we’ll be at he end of the season and hopefully we’ll sneak into the playoffs.”

Junior Ella Quesnelle is playing second singles, junior Cate Merriam is playing third singles and senior Zelda Hayes is playing fourth singles. The three are the team captains this season and have been steady thus far.

“We knew that we wanted to have a good season regardless of our outcome as a team,” said Hayes. “We’re putting everything we have into it and match by match making every point count.”

“Zelda is playing singles for the first time,” said Coach Keegan. “She is doing well with just a couple of loses. She’s a lefty like Elsa, it gives a nice combination of lefties and righties. Ella and Cate are smart, steady and consistent players. They are holding her own against the D-I top dogs.”

“Our doubles teams are doing well,” Coach Keegan said. “Though we have a lot of novice doubles players. They are getting better as the season goes on. They are scrappy and and helping us win.”

“The girls are working their tails off and working hard to represent the school and our tennis program that has had some success over the years,” he said. “We’ll hopefully continue to snowball this program and hopefully, potentially be at the top of D-I.”

All other matches were suspended due to darkness.