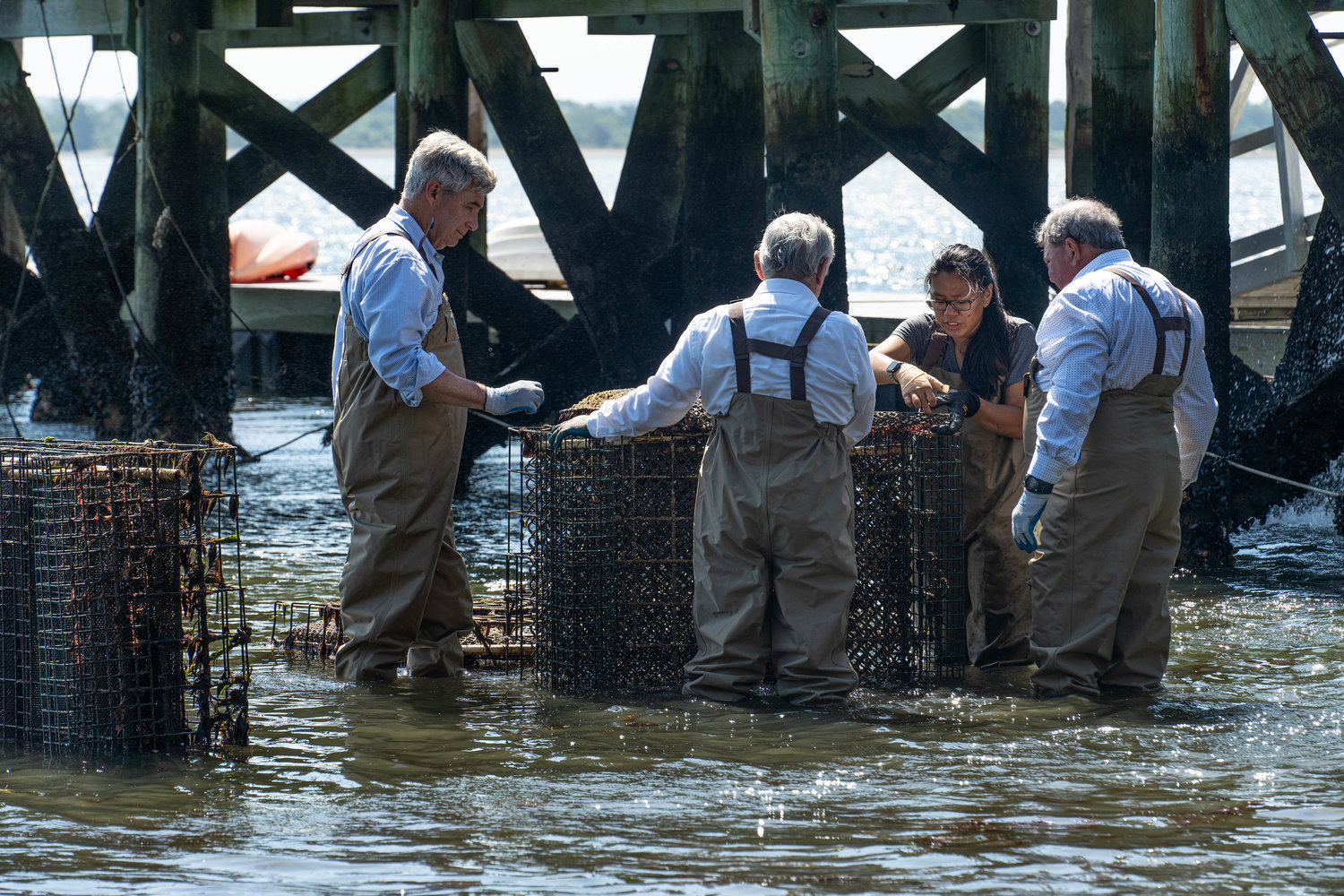 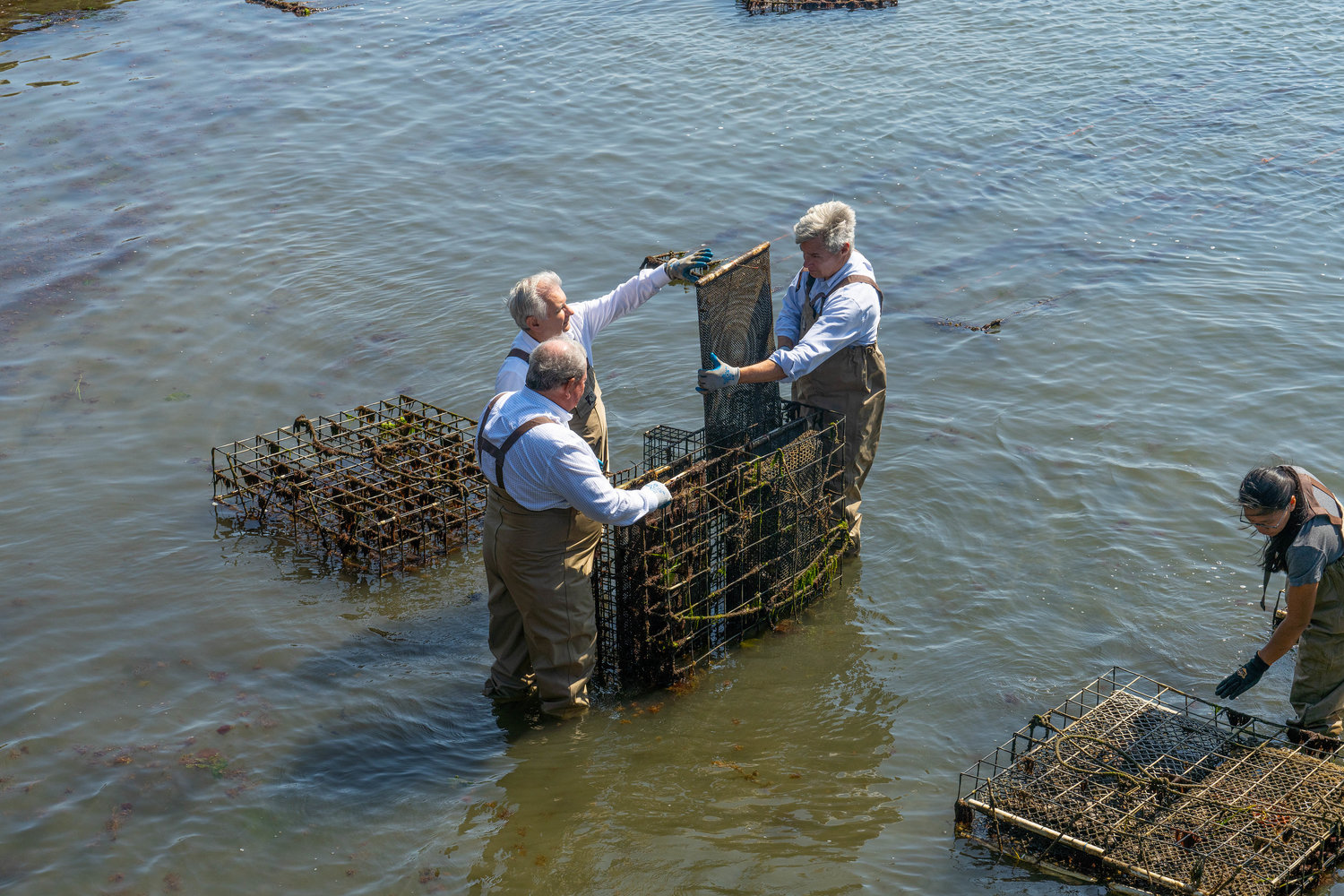 With Rhode Island boasting one of the largest-and-growing oyster industries in the country, Reed and Whitehouse are teaming up with the university to develop smart strategies and direct support to make shellfish farms stronger and more productive and help new shellfish aquaculture businesses start up across the Ocean State.

Aquaculture is one of the fastest-growing food production sectors in the world, and Rhode Island is home to more than 80 oyster farms, or one in every six oyster aquaculture businesses on the East Coast. In fiscal year 2022 appropriations law, Reed and Whitehouse secured a $1.6 million earmark for RWU to provide support for shellfish aquaculture farmers in Rhode Island through aquaculture research, resources, and legal services.

How to raise an oyster

Oyster farming begins in a hatchery, where oysters spawn. Oyster larvae then spend their first few weeks in tanks feeding on algae and growing shells. When the oysters grow to be about a quarter-inch long, they are placed in special upweller tanks, where large quantities of saltwater is pumped past the infant oysters, giving them an abundant supply of nutritious food to grow and get a healthy start. The upweller lets the oysters safely grow big and strong enough to fend off predators like crabs before being released into the ocean.

When the oysters grow large enough, they are placed in cages out in the bay or estuaries, where they continue to feed and grow, closely monitored by oyster farmers, until they are ready to be harvested. It can take oysters from one to two years to go from hatchery to market.

In addition to helping university scientists grow oysters and research, diagnose and understand the health of shellfish, the University’s Center for Economic and Environmental Development (CEED) program also serves as a resource for people looking to start their own shellfish farming operation and navigate the regulations and agencies involved in shellfish aquaculture.

The funding will expand RWU’s aquaculture operations to raise and distribute four million oyster seeds annually for Rhode Island oyster farmers in a dedicated upweller system — critical to successfully growing oysters during their early life stage. RWU will be making this important part of the growing process more accessible to local farmers.

Portions of the funding will equip RWU’s organic chemistry lab as a histology lab, to support the development of coastal resilience through shellfish aquaculture disease and pollutant testing. It will also support RWU Law School’s Marine Affairs Institute, home of the Rhode Island Sea Grant Legal Program, to provide legal services and policy resources to communities interested in shellfish aquaculture.

“For more than 20 years, Roger Williams has had the leading marine aquaculture science program,” said Miaoulis. “We are proud to be writing the next chapter of our leadership work in Rhode Island’s growing shellfish aquaculture industry.”

Senators Reed and Whitehouse want the Ocean State to have the right strategy and resources to sustainably grow the state’s aquaculture sector and address a range of production challenges while ensuring the health and safety of fresh, local seafood.

“Shellfish aquaculture is becoming an integral part of our coastal ecosystem’s biodiversity, environmental stewardship, food security, and economy. Each year, the shellfish aquaculture community continues to grow, employing hundreds of Rhode Islanders and bringing in millions of dollars in sales,” said Senator Reed.  “We want it to grow responsibly and sustainably.”

Roger Williams University is unique in being able to provide both the aquaculture knowledge and legal expertise required to develop a thriving oyster farming industry.

“Aquaculture is one of the pillars of Rhode Island’s Blue Economy, so it’s fitting that Roger Williams University has become a one stop shop for current and aspiring aquaculture farmers,” said Whitehouse. “Senator Reed and I were glad to deliver federal funding to support the university’s programs to sustainably grow the industry, create jobs, and ensure that the Ocean State continues to produce the world’s best oysters.”