The two undergraduates got to test-drive NASA-grade tools, learning how to build a laser, handle fiber optic components, and operate a splicer, while conducting numerous research experiments. 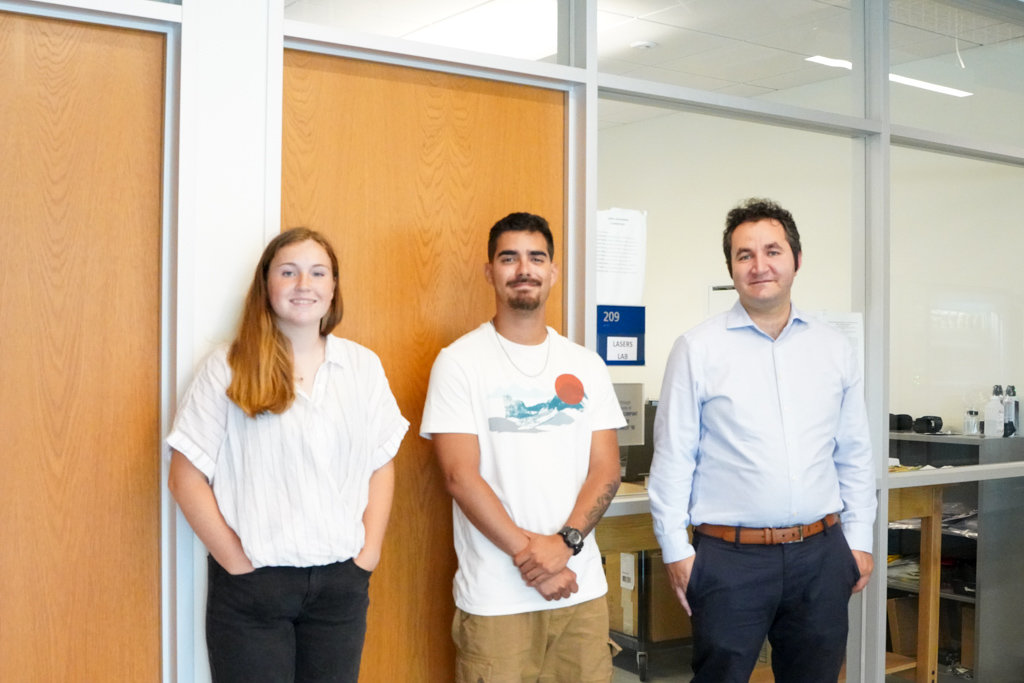 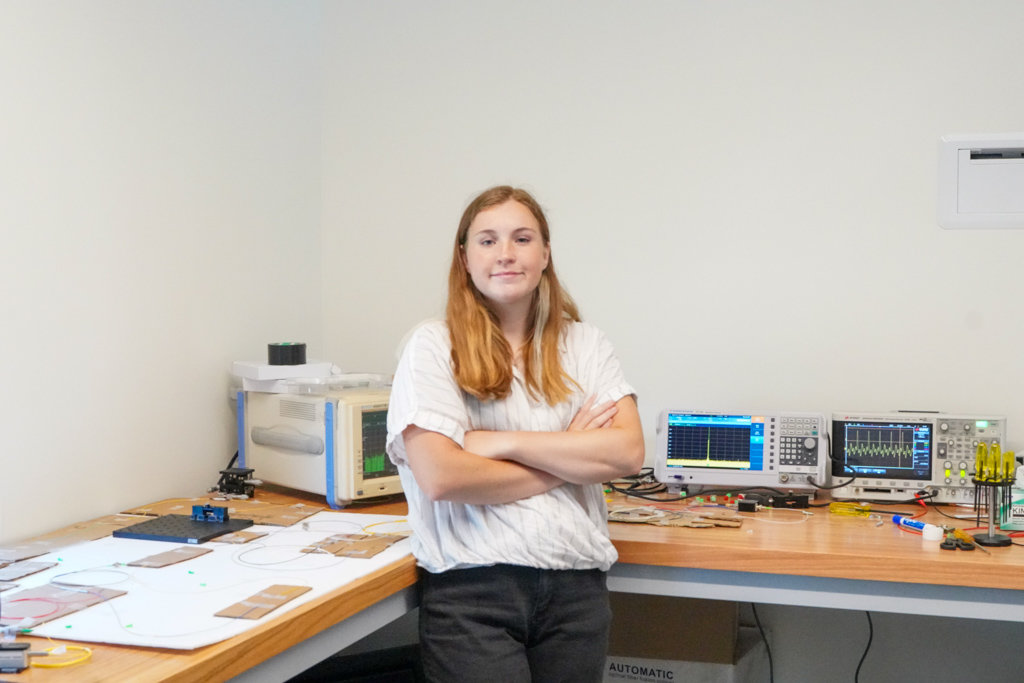 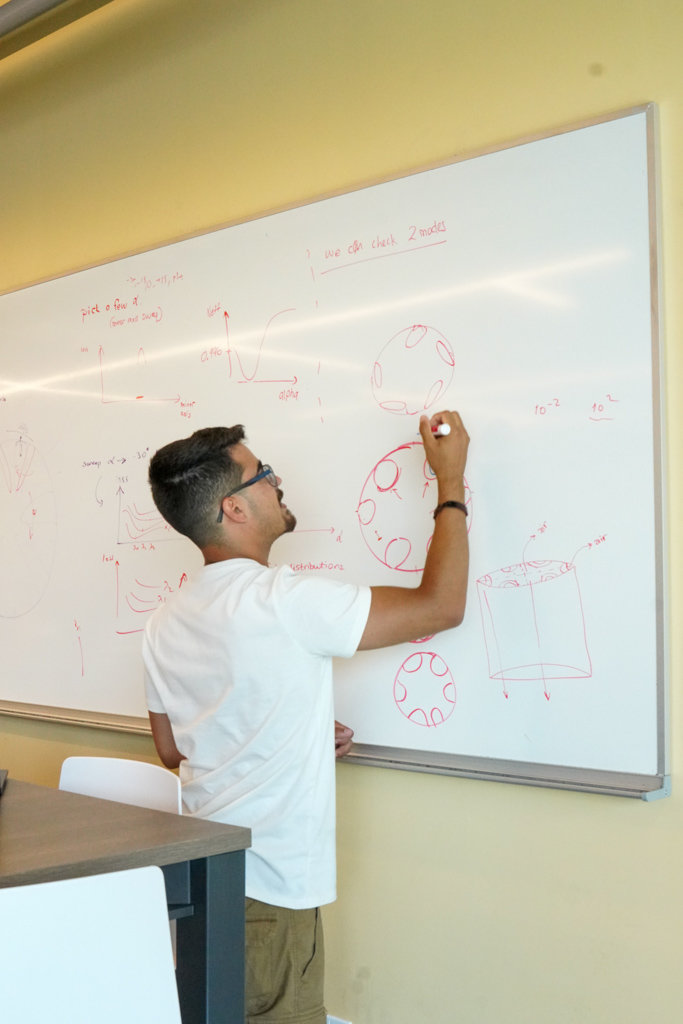 As part of his lasers-related research, ​Armas draws models on a whiteboard in SECCM Labs.
Stacey Pacheco/RWU
Previous Next
Posted Tuesday, September 27, 2022 3:14 pm
By Melanie Thibeault

"It sparked my creativity and curiosity," Armas, a first-generation student from West Warwick, R.I., said about the research opportunity. In his classes, he learned about Engineering principles and solved specific problems, while his research allowed him to go a step further. "There were times where I was not certain that I was even looking for an answer because there was no precedent," he said.

Armas and Phillips’ advisor, Assistant Professor of Engineering Ahmet Akosman, whose areas of expertise include lasers and fiber optics, received a yearlong NASA-RI EPSCoR Research Seed Grant to purchase state-of-the-art equipment for the Lasers Lab. The two undergraduates got to test-drive the NASA-grade tools, learning how to build a laser, handle fiber optic components, and operate a splicer, while conducting numerous research experiments.

Lasers, which produce very narrow beams of light, are used in many instruments and technologies, everything from carrying internet and TV signals to helping perform precise medical procedures. For most modern applications, light is transmitted over fibers, which has some limitations, Akosman said.

For his project, Armas researched ways to design a system to more efficiently transmit light. He replicated renowned experiments and confirmed their results through his own simulations, which he said was great practice for when he tried his own original research experiments. His goal was to discover “what we can add to what we already know about different fiber optics,” he said. “Especially in recent years, we’ve gotten brand-new groundbreaking research on lasers and fiber optics. (Akosman) is taking a different approach to that.”

With more research, lasers have the potential to be used in many ways, including as sensors, Akosman said. For example, “if you can put liquid in it, you can add ocean water and sense pollutants in the water,” he said.

Phillips, from Schuylerville, N.Y., researched ways to design a new ultrafast fiber laser that’s more economical than models already being used in science and defense industries. Her favorite activity was learning how to use the splicing machine, which pieces together two separate components. “It’s almost seamless,” she said. “It’s cool to get the laser fully constructed, and it was exciting to see it work. We got it to work really well.”

After 13 weeks of research, Armas and Phillips compiled their findings in research papers, which they’ll present at a NASA Rhode Island Space Grant Consortium symposium in spring 2023.

“It is important for Engineering students to see research – if we think about it as the creation of new knowledge – as a viable career path and to increase their understanding of the doors that participating in research may open in terms of graduate school,” said Robert Griffin, Dean of the School of Engineering, Computer Science, and Construction Management. “I sense an appetite for an increase in research opportunities from a large number of students and in providing them from a large fraction of the faculty.”

“I hope to go to graduate school after Roger and continue research, and this is a great start to that goal,” said Phillips, noting that through her project she increased her engineering skills and gained valuable research experience. “This opportunity perfectly complements my professional and personal goals.”

Armas agreed: “This project piqued my interest in researching past my undergraduate career, something I had not previously considered. This also opens new avenues for me to work with optical companies or fibers post-graduation because of my experiences.”

Their research experience will set Armas and Phillips apart when they apply for jobs or graduate school because employers will be impressed that they know how to work with advanced technology right out of college, Akosman said.

“The chance that an undergrad would use those technologies is pretty low, even at the biggest institutions,” he said. “That they’ve had these opportunities makes me happy.”

This story was re-published with permission from Roger Williams University. It was written by Melanie Thibeault, content producer/editor for the college. The original article can be found here.