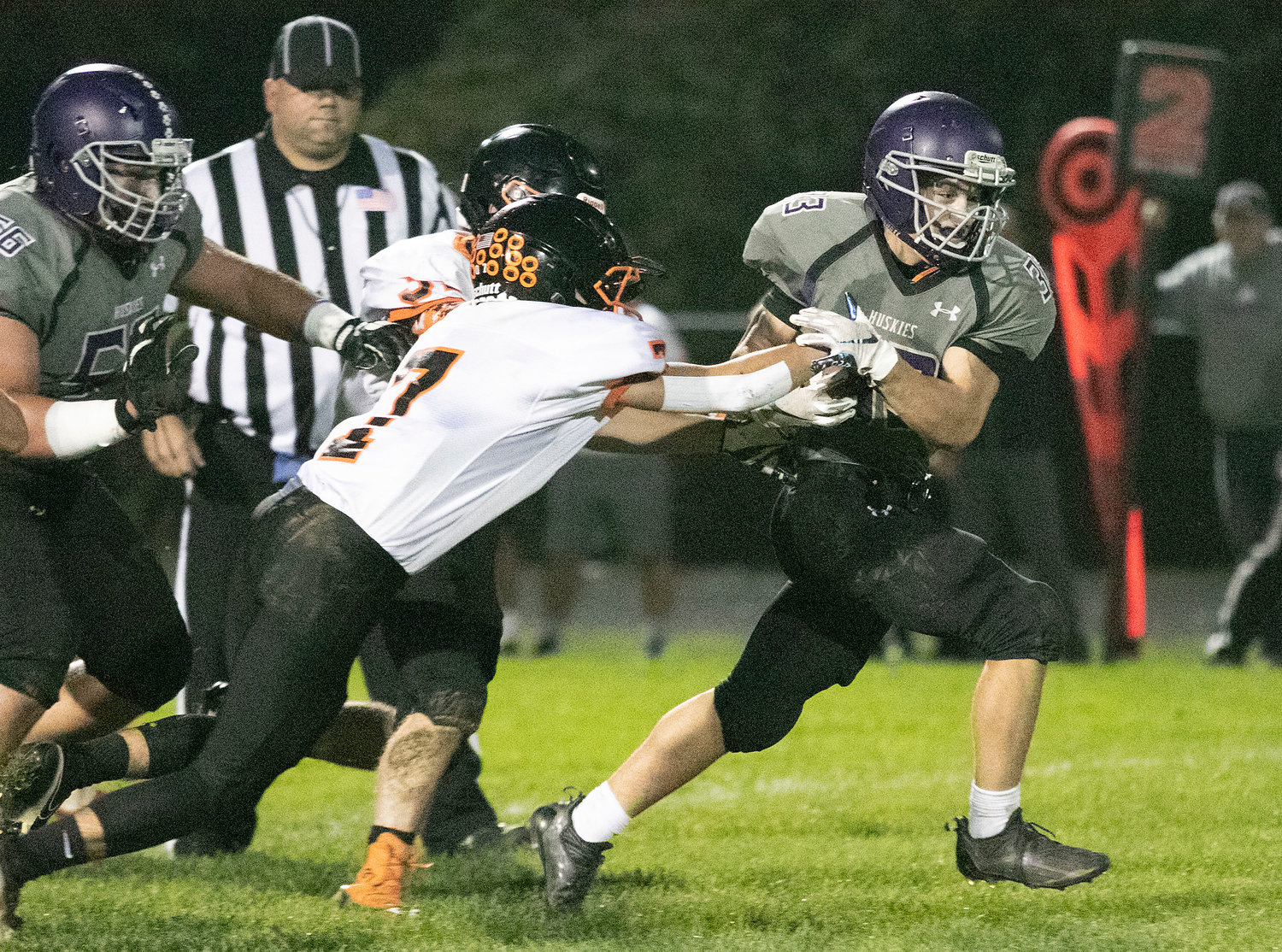 Brock Pacheco sheds a tackle for a big gain in the first half.
Richard W. Dionne Jr. 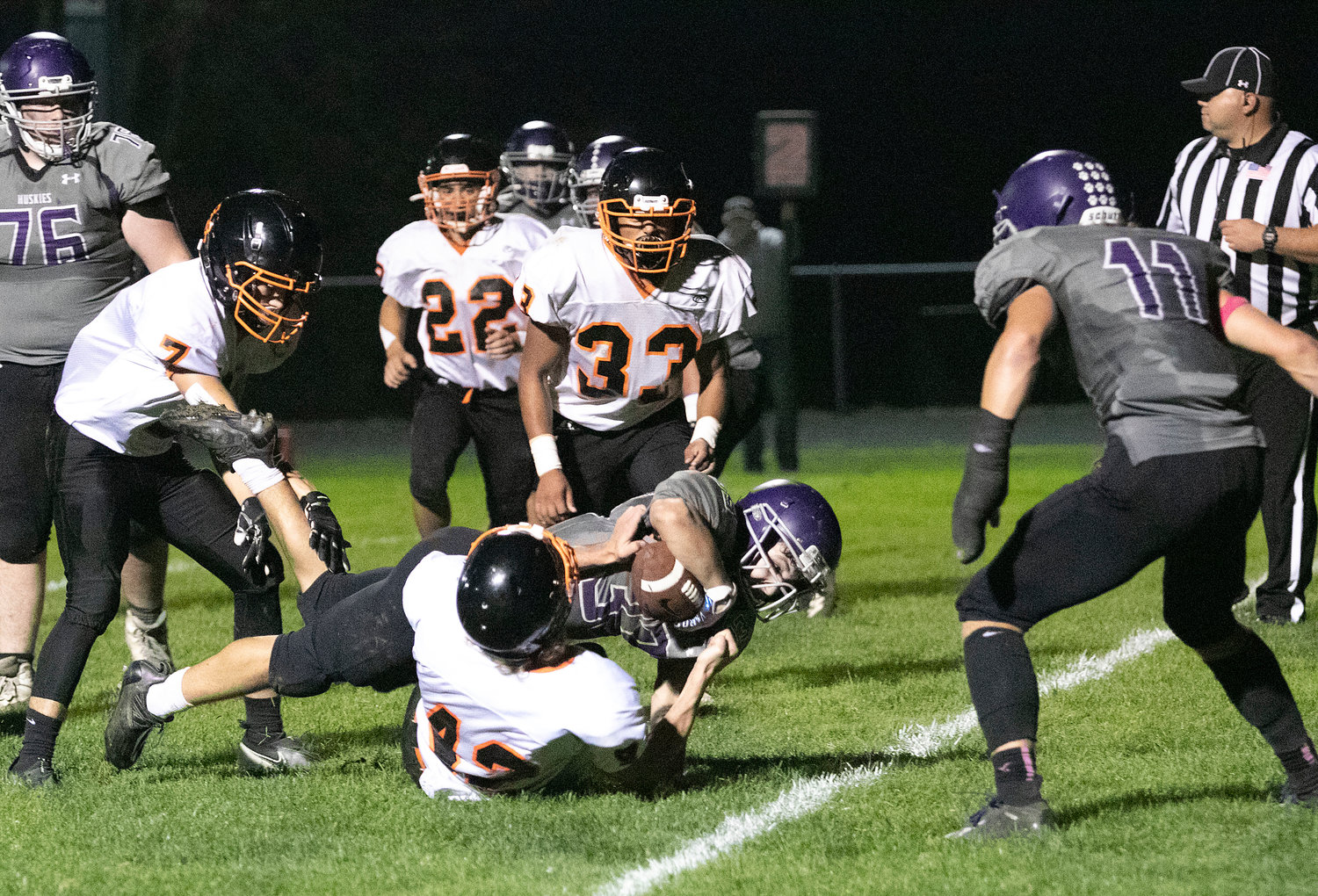 Brock Pacheco lunges for the end zone in the first quarter. The play was called back due to a Huskies penalty. Pacheco scored on a 24 yard run, on the very next play to cut the Wizard’s lead to 7-6.
Richard W. Dionne Jr. 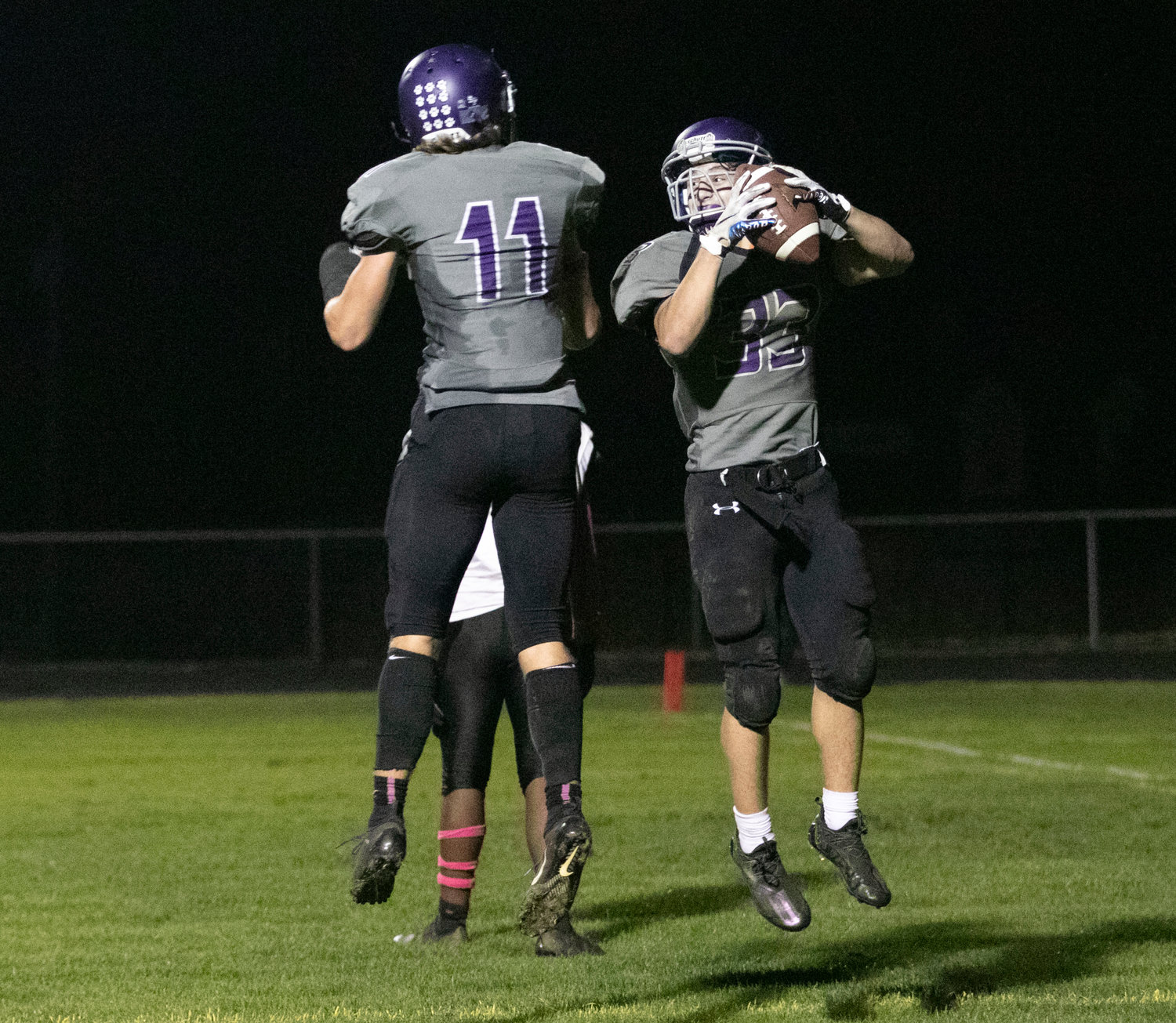 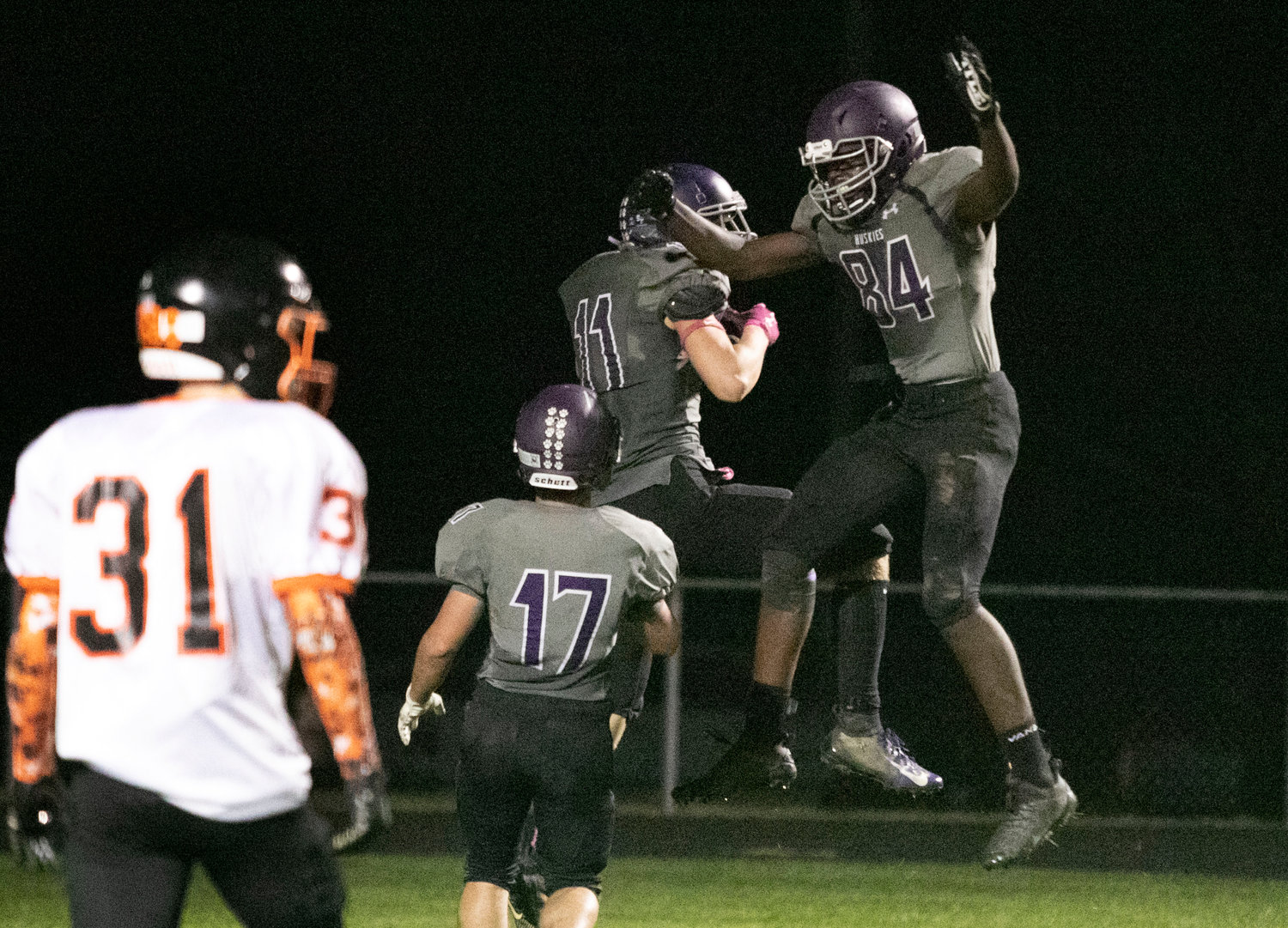 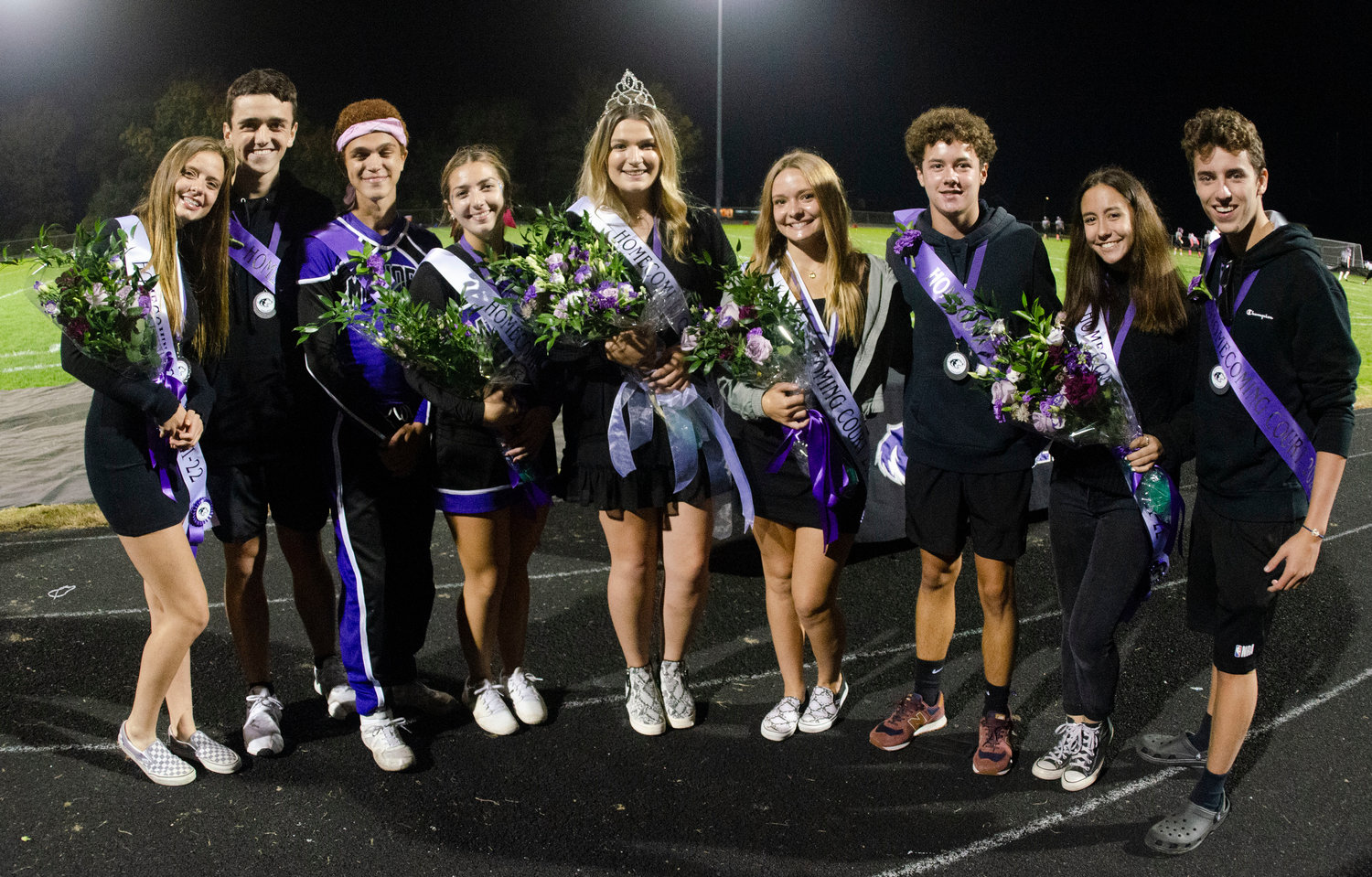 Junior running back Brock Pacheco ran for four touchdowns as the Mt. Hope football team beat West Warwick, 34-28, in a thrilling Homecoming game at Roger Dietz Field in the Thomas Vendituoli Complex in front of a packed crowd on Friday night. The win evened the team’s record at 3-3 in Division II B. The team is currently in fourth place behind St. Rays, Classical and Westerly.

Pacheco ran for 168 yards on 13 attempts from scrimmage and rambled for three touchdowns, of 24, 7 and 61 yards. The junior saved his best run for last, returning a West Warwick kickoff 80 yards for a game winning touchdown with minutes left in the fourth quarter to put Mt. Hope ahead 32-28. Pacheco also pitched in defensively for the Huskies with 11 tackles.

Defensively, junior linebacker David Rhynard was a beast for the Huskies, making 15 tackles throughout the game. Hunter Kavanaugh, Rick Julien and Atley Jenness, each contributed eight tackles for the Huskies.

Mt. Hope spotted West Warwick seven points when the Huskies fumbled on the opening kick off. West Warwick recovered the ball on the 20 yard line and scored two plays later when Wizards running back Jonathan Griffin ran for a 14-yard touchdown to put the Wizards up, 7-0.

Ramaglia directed the team on a ten-play drive starting from their own 35 yard line on the Mt. Hope’s next possession. The quick and shifty Pacheco ran it in from the 24 yard line to cut the lead to 7-6. The Huskies were penalized for offsides during the extra point and with the extra yardage, place kicker Avery Robitaille missed the kick wide left.

In the second quarter, Mt. Hope recovered a West Warwick fumble on their own 38 yard line. Ramaglia threw a screen pass to senior running back Nikolas DaSilva and he ran it 53 yards down to the Wizards 9 yard line. Pacheco scored again two plays later to give the Huskies a 12-7 lead. The Mt. Hope two point conversion attempt was no good.

The Huskies attempted an onside kick on the ensuing kickoff. The Wizards recovered the football in Mt. Hope territory and scored on a Maile Brady pass to Rich Medeiros on fourth and goal from the 20 yard line to give the Wizards a 14-12 lead.

Ramaglia threw to McGuire running a post pattern and hit the senior in stride for a 40 yard touchdown to give the Huskies an 18-14 lead. Ramaglia connected with receiver Rick Julien to convert the two point conversion and up the lead to 20-14 at halftime.

Griffin gave the Wizards a 21-20 lead in the third quarter on a 6-yard touchdown run.

Pacheco then rambled 61 yards into the end zone for a touchdown on the Huskies next possession, to give Mt. Hope a 26-21 lead. The Huskies failed a two point conversion attempt.

West Warwick took the lead again in the fourth quarter. Brady heaved a bomb to Medeiros for an 82-yard touchdown catch and run, to give the Wizards a 28-26 lead.

With time winding down, Pacheco fielded the Wizards kickoff on the Mt. Hope 20 yard line, broke up the left side of the field and ran untouched into the end zone for an 80-yard touchdown run, to give the Huskies a 32-28 lead. Ramaglia threw to Riley Howland for a two point conversion to give the Huskies a 34-28 lead.

The Mt. Hope defense stalled the Wizards in Huskies territory as time ran out for a thrilling Huskies win.

Mt. Hope Homecoming participants marched in pairs down the track as announcer Geoff Keegan called out their names during a ceremony at halftime of the Mt. Hope football game against West Warwick on Friday night.

Seniors Nick Andreozzi and Mia Padula were named homecoming king and queen. Andreozzi, a midfielder for the soccer team, was in West Warwick beating the Wizards, 2-0, and could not participate in the ceremony. Padula a volleyball co-captain, was announced as queen and crowned in front of the crowded stands at Roger Dietz Field. She was photographed with the Homecoming court on the track in front of the stands. The Mt. Hope High School marching band and the Huskies cheerleaders also performed during halftime.