The Mt. Hope tennis team blanked Rogers, 7-0, in Newport and blew out South Kingstown, 5-1, at home, to start the young fall season at, 2-0.  The Huskies currently share the top spot in Division … 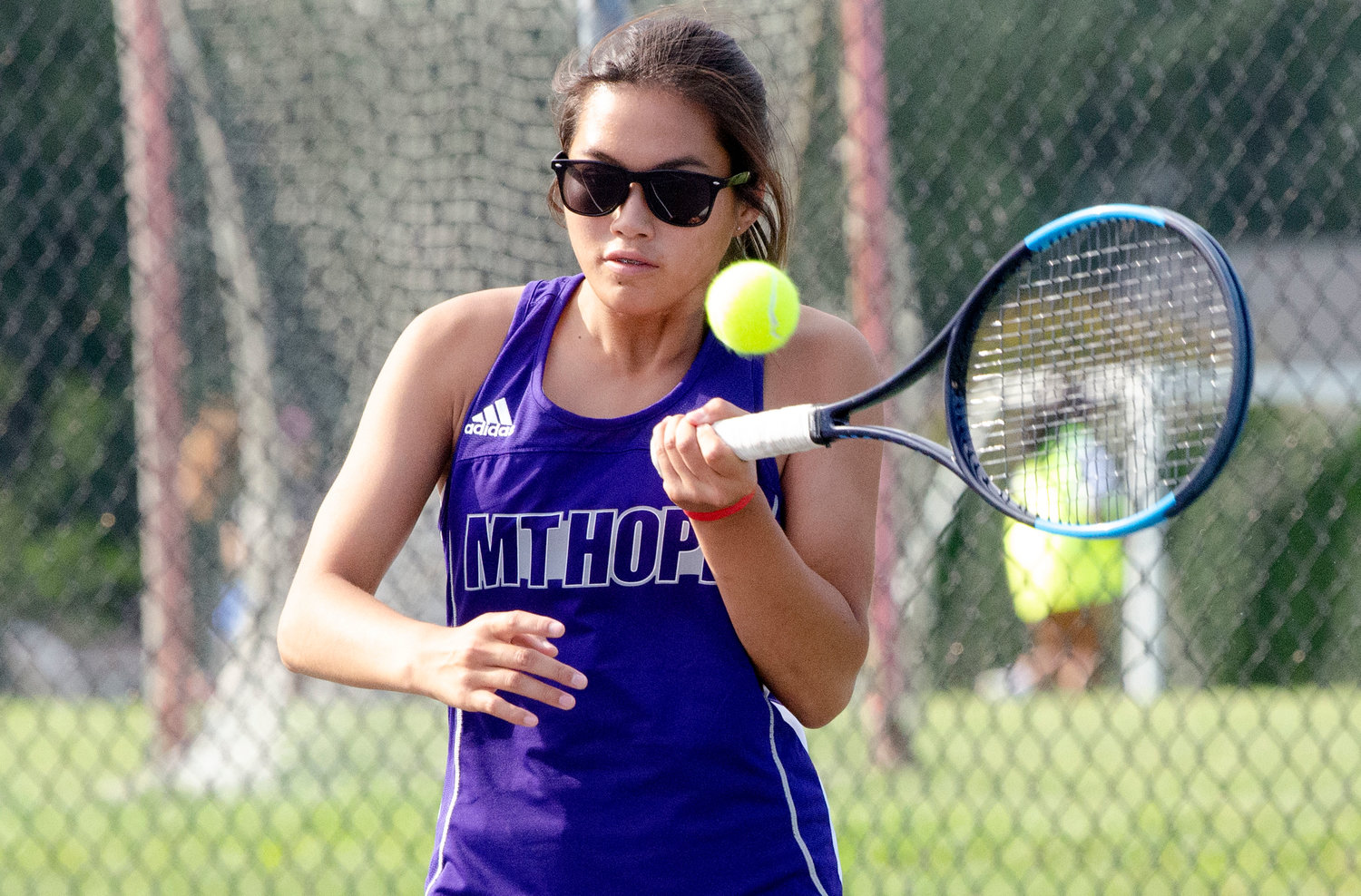 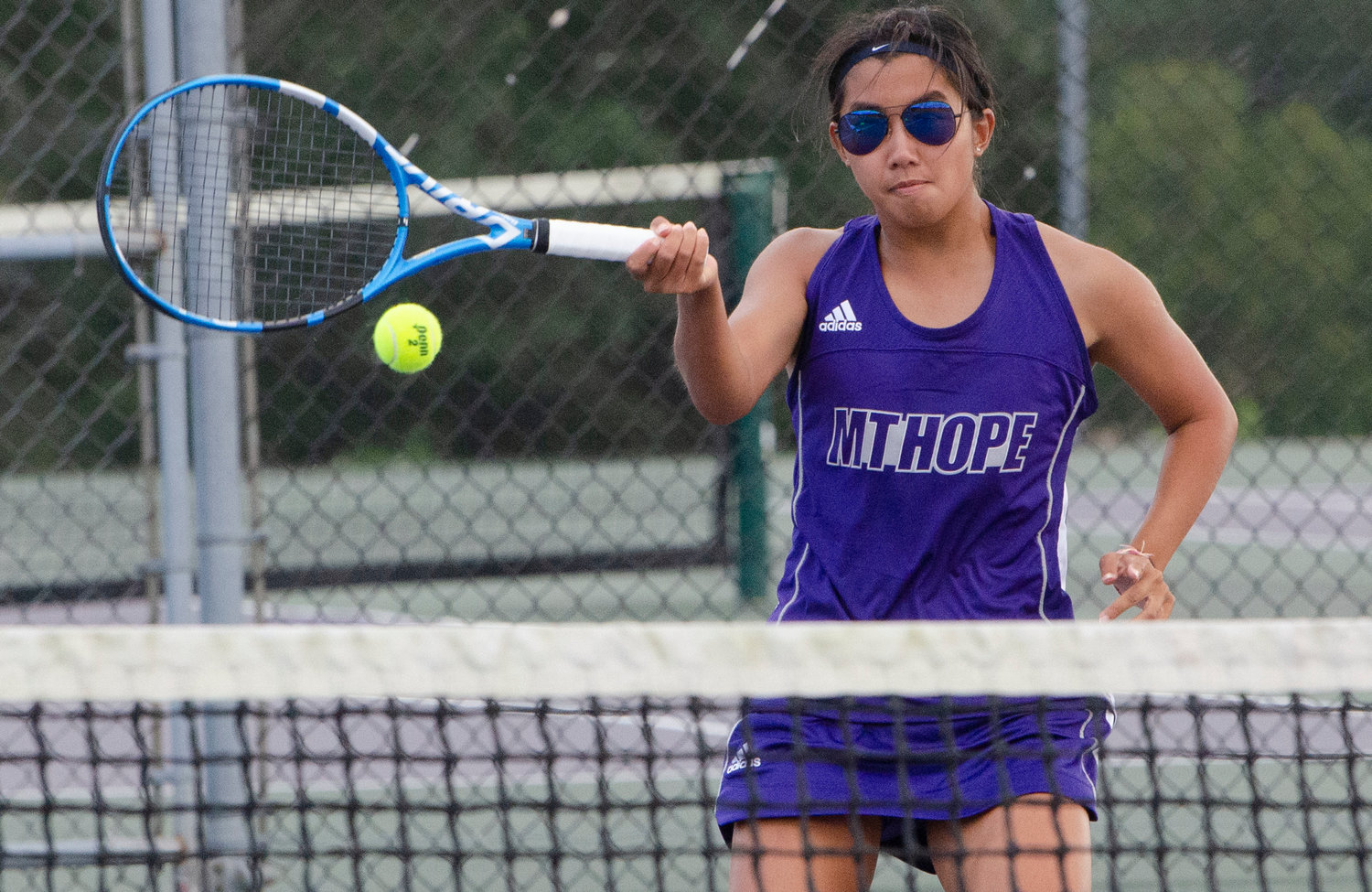 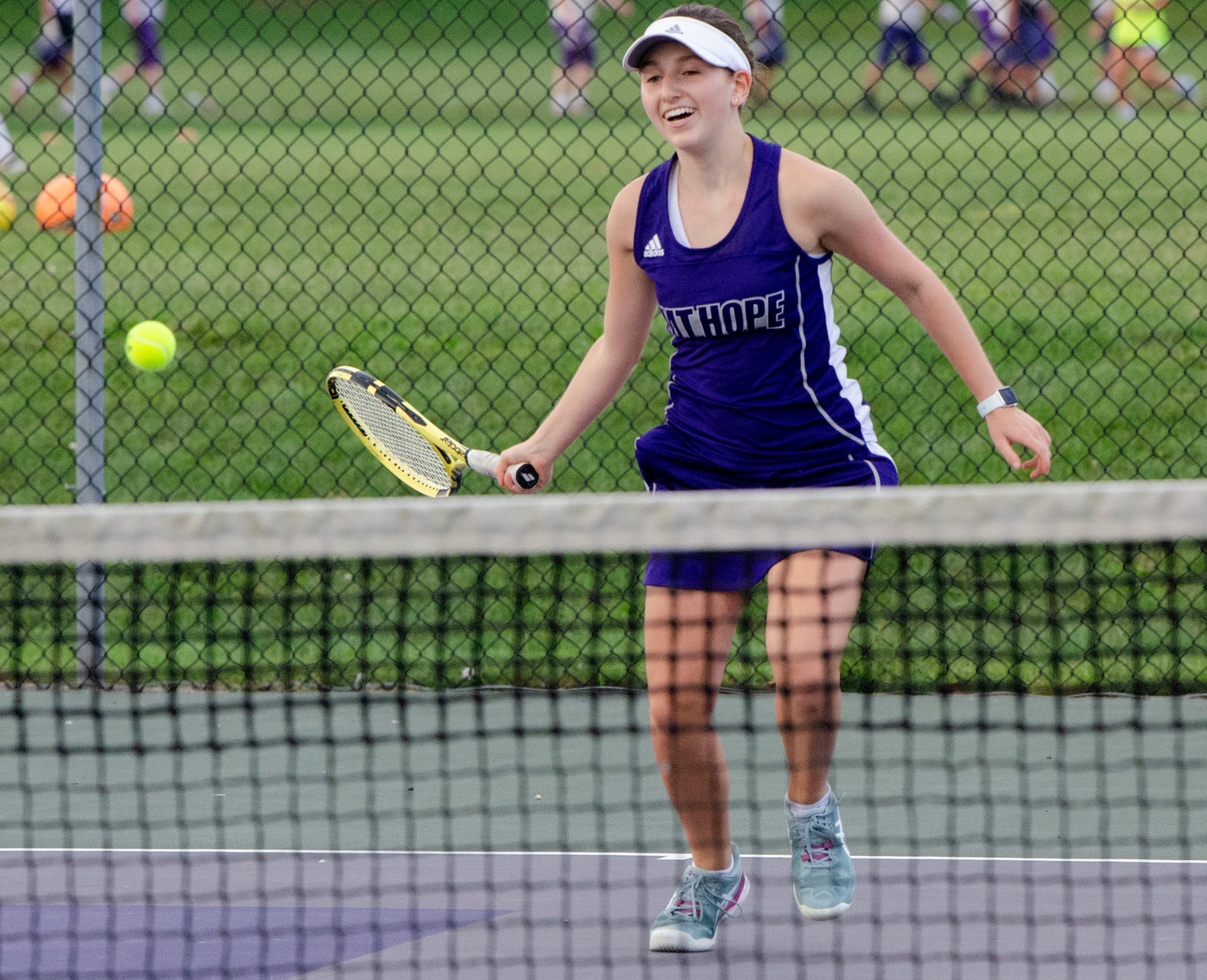 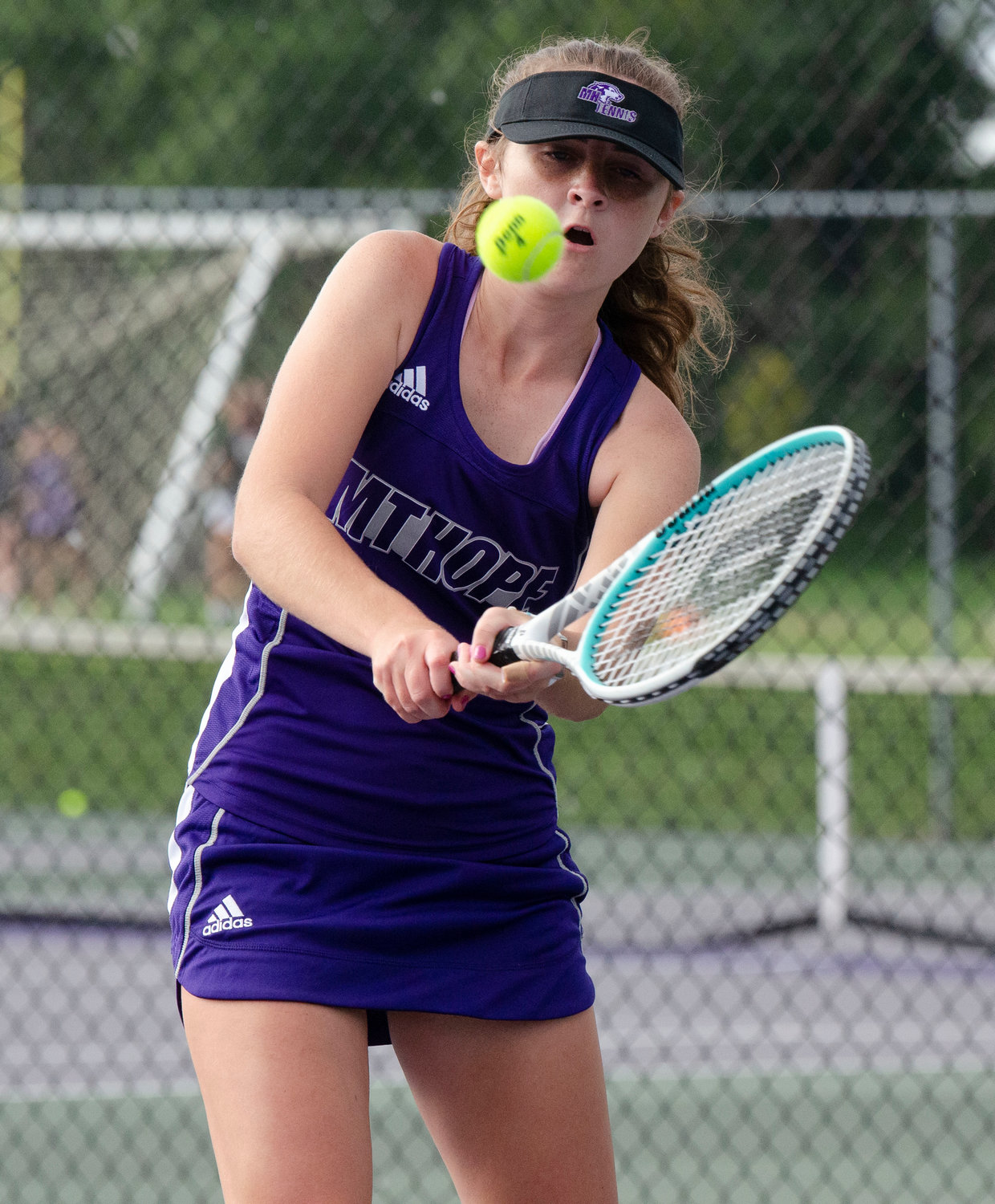 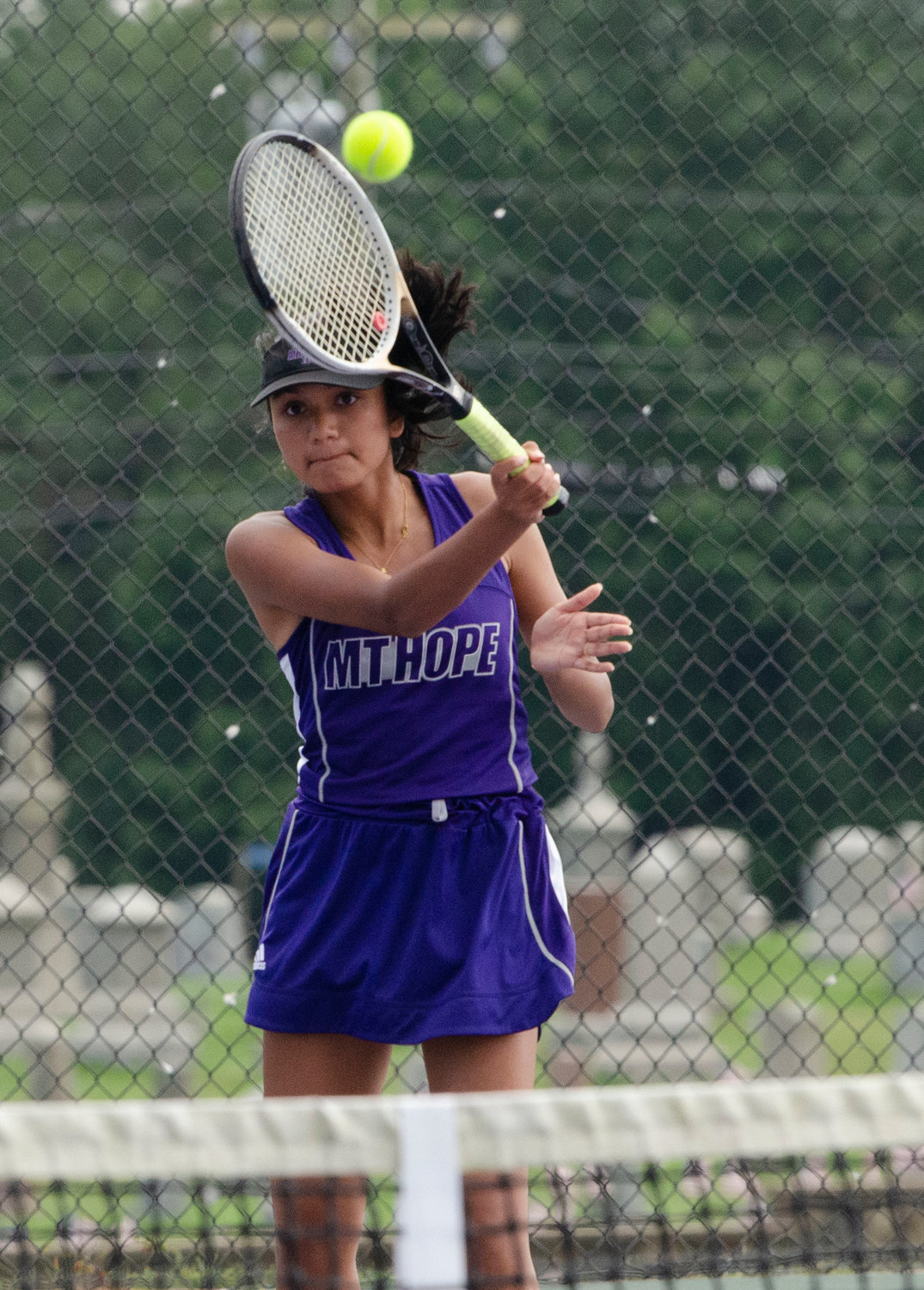 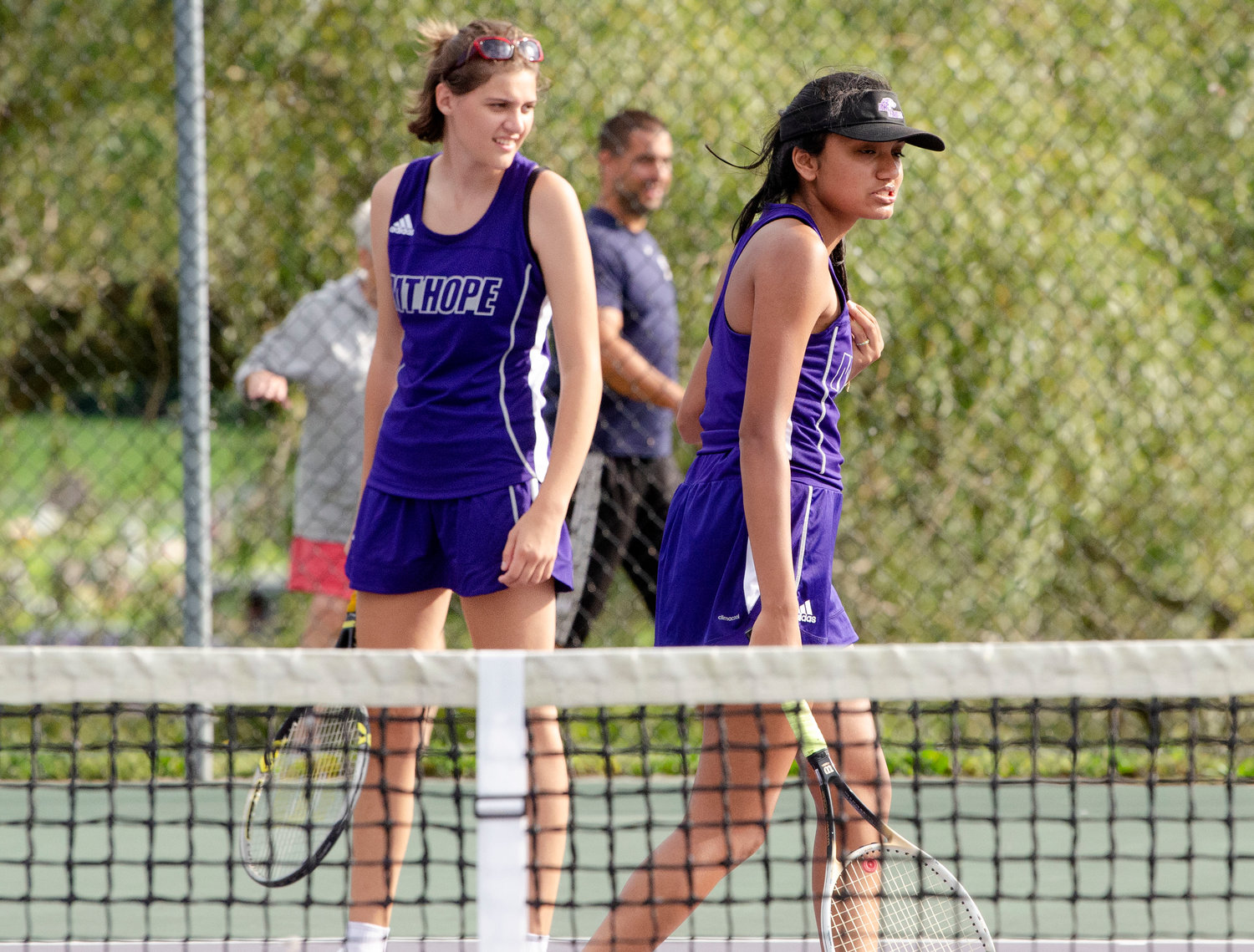 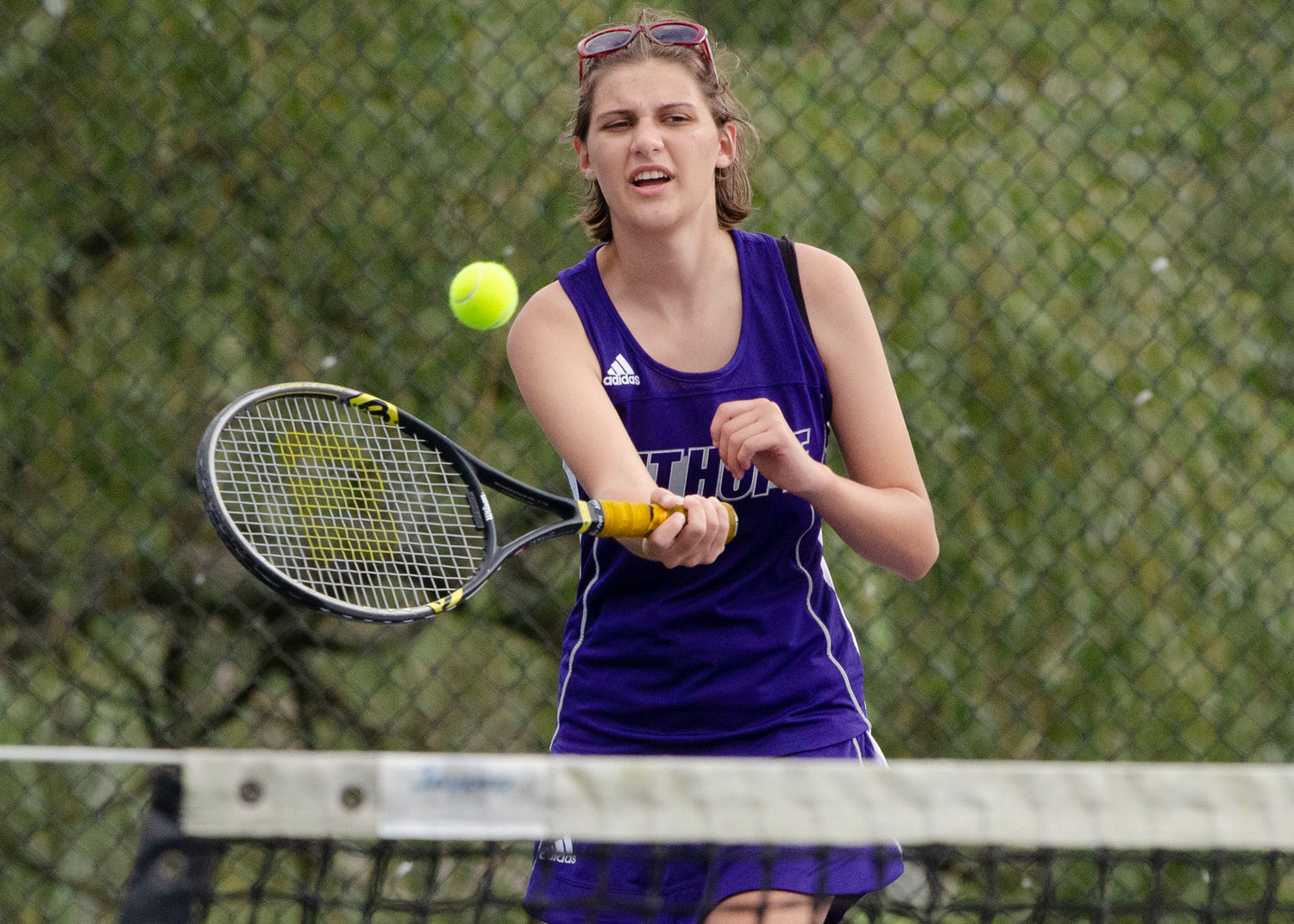 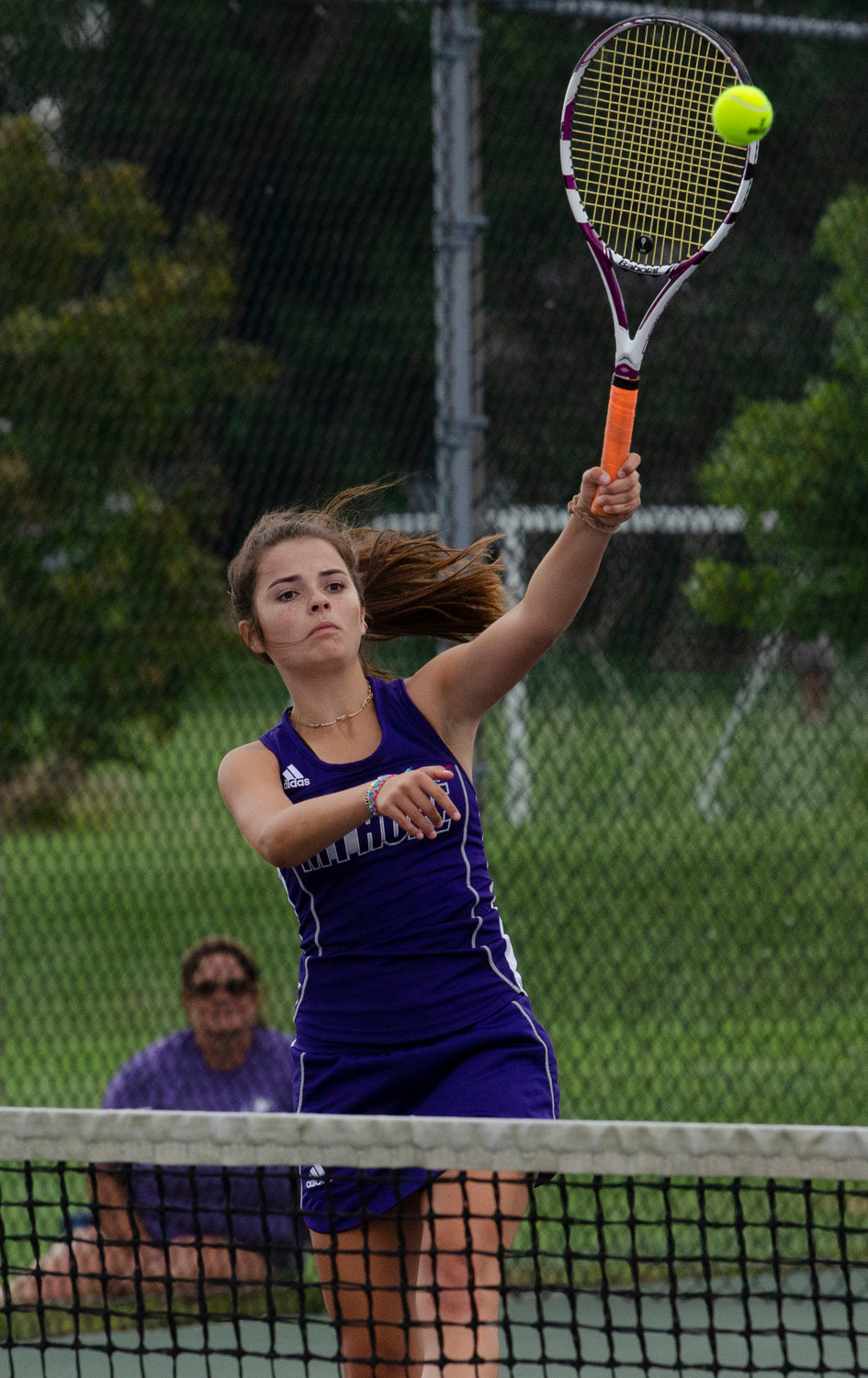 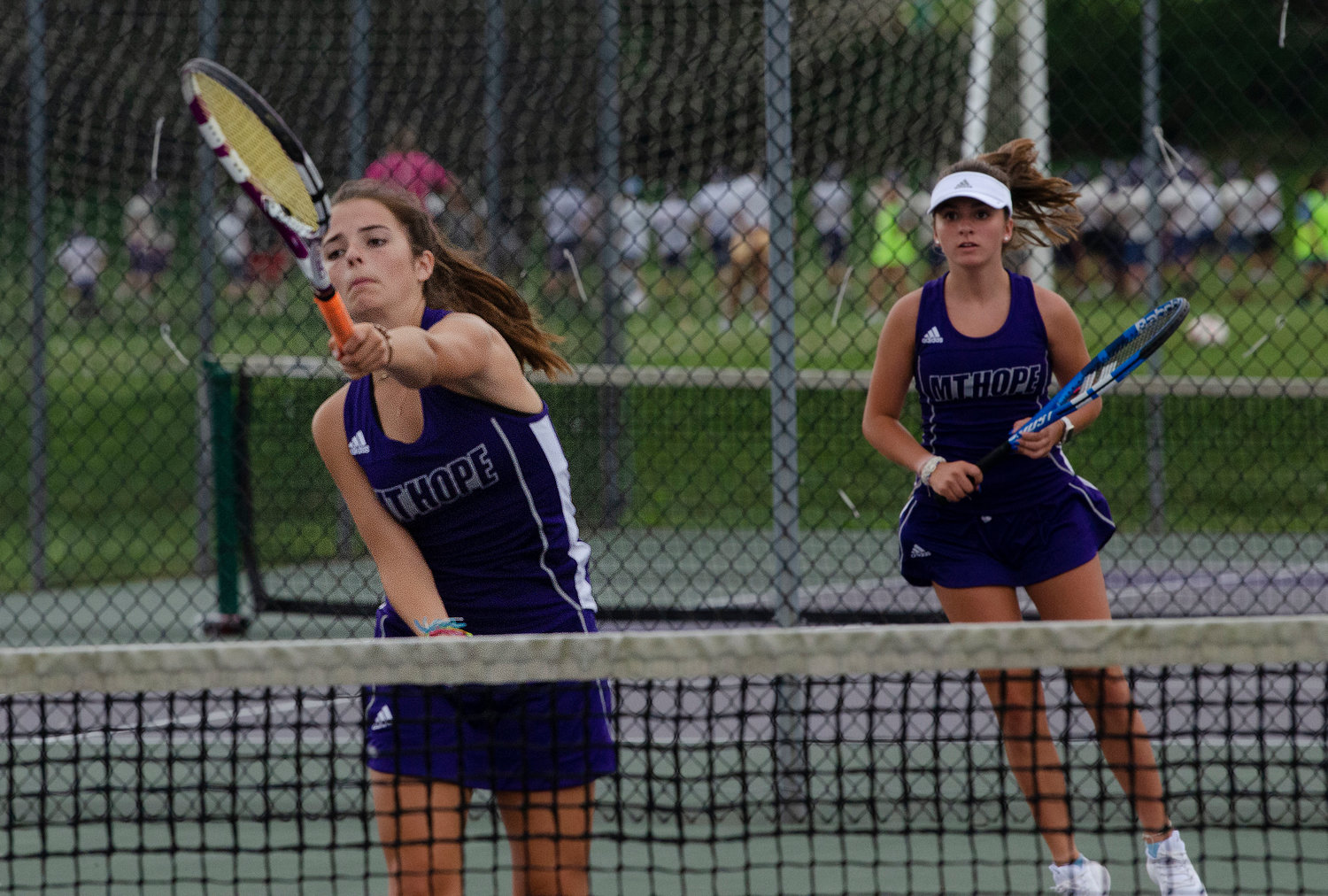 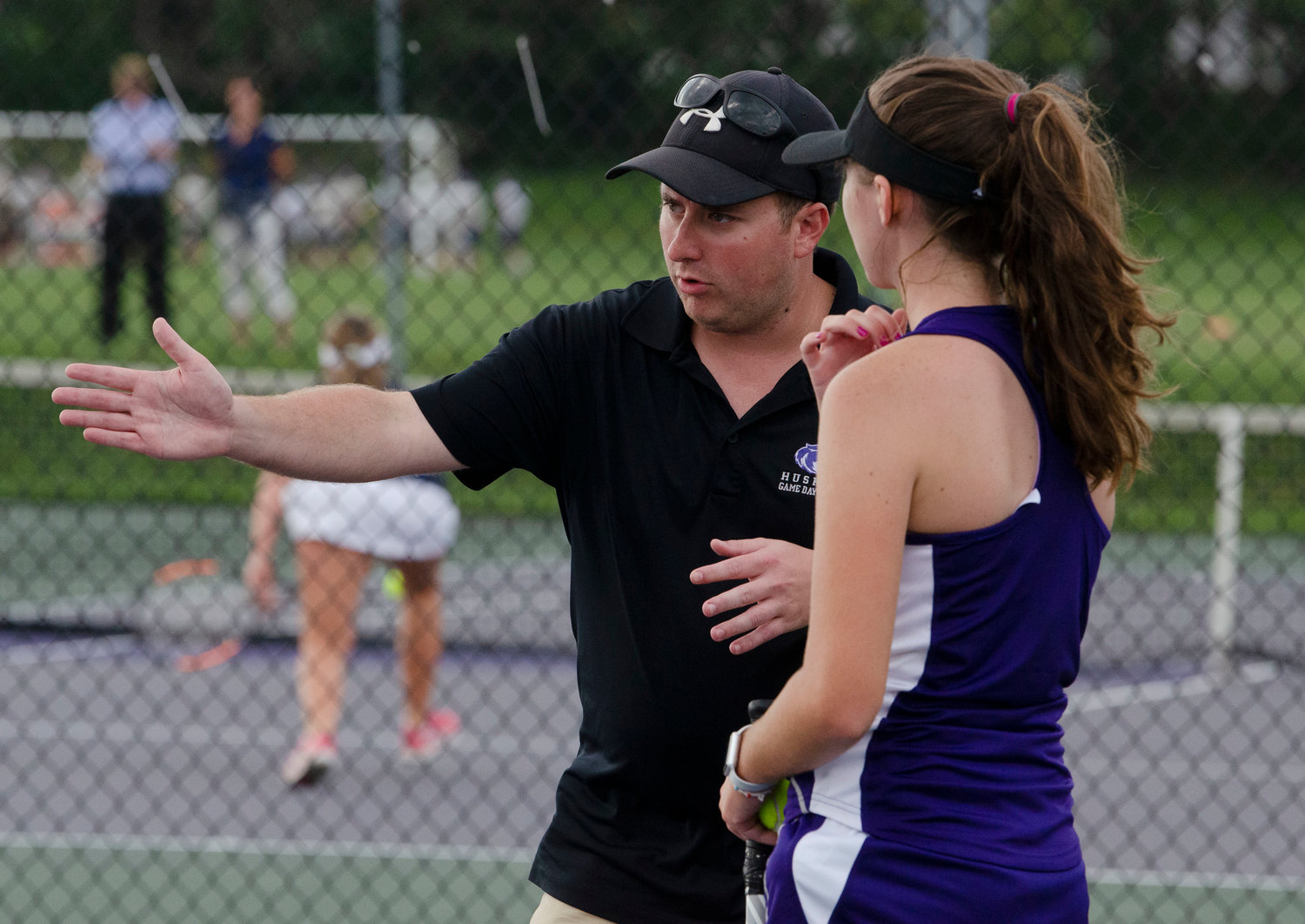 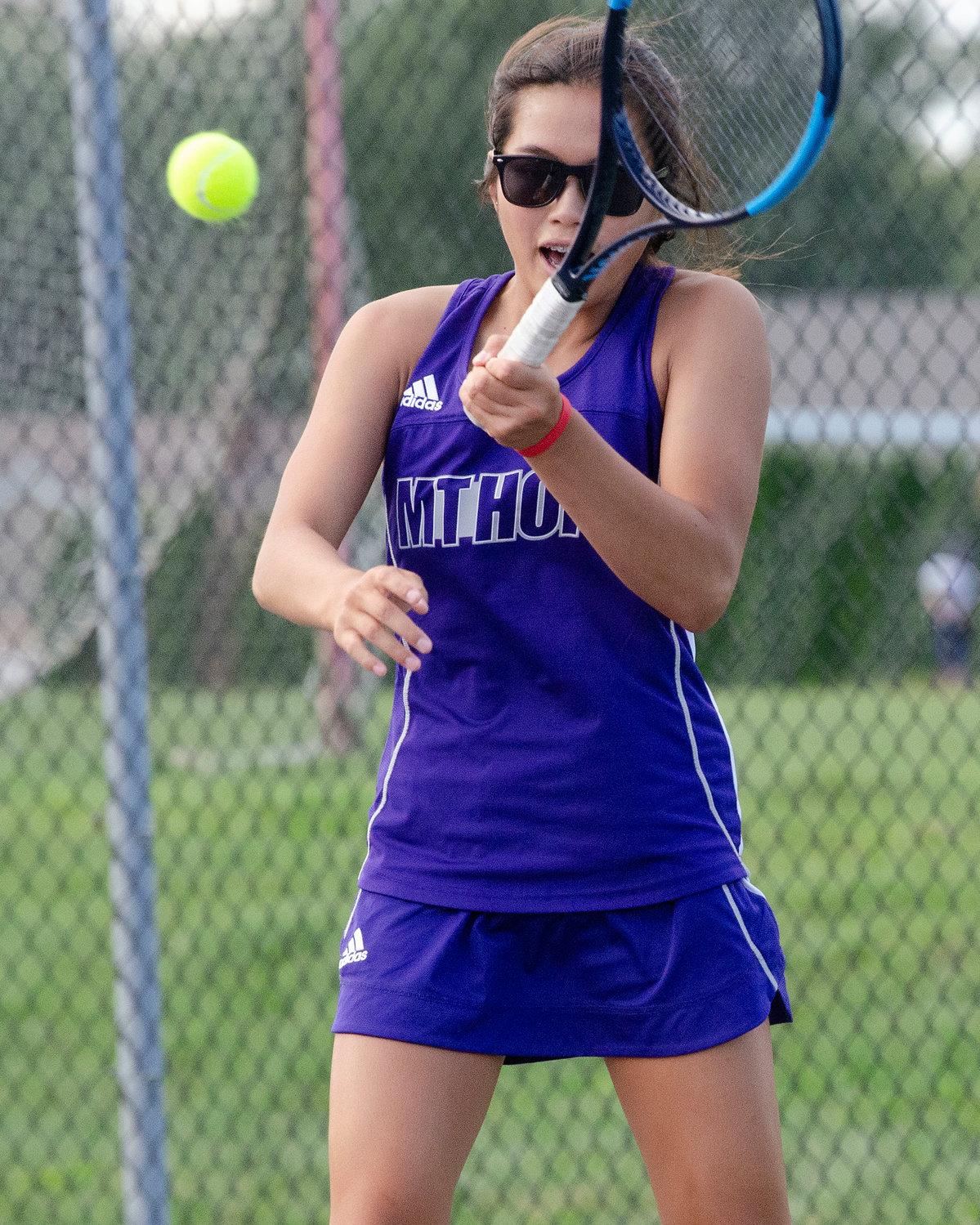 “We want to grind out every match and learn. It's started out our way, but, I think there definitely will be some tough, close matches on the horizon.””
Huskies head coach Geoff Keegan
Photos and story by Richard W. Dionne, Jr.

The Mt. Hope tennis team blanked Rogers, 7-0, in Newport on Teusday, and blew out South Kingstown, 5-1, at home on Wednesday, to start the young fall season at, 2-0.  The Huskies currently share the top spot in Division II , with Middletown.

"We're a fairly young team of go-getters,” said Huskies head coach Geoff Keegan. “We want to grind out every match and learn. It's started out our way, but, I think there definitely will be some tough, close matches on the horizon.”

Coach Keegan feels that if the team can improve on unforced errors and hone their skills, they can have continued success in Division II play this season.

Whites have been dominate in singles

First singles player Elsa White, a left handed sophomore, has won both of her matches this season, besting Isabella Student of Rogers, 6-2, 6-1, and Grace Commiskey of South Kingstown, 6-3, 6-3. White played second singles as a freshman. “Elsa is athletic and smart on the court,” coach Keegan said. “She’ll have success this year at the state tournament.”

White’s elder sister, Eva also started the season at 2-0 as the team’s second singles player. White defeated Grace Rochelle of Rogers, 6-2, 6-3, and Bonnie Moore of South Kingstown, 6-0,6-0. “Eva is a senior triple-captain and has been steady and consistent throughout her entire high school career,” said coach Keegan. “She’s patient on the court and calculated with her shots and can exploit her opponent’s weaknesses.”

Sophomore Cate Merriam at third singles, beat Andrea Aguilar of Rogers, 6-2, 6-3, and Emma Davis of South Kingston, 6-1, 6-1. Merriam moved up from third doubles and has had great success, said coach Keegan. “Cate is a strong player, who is all business on the court.” `

Forth singles player Ella Quesnelle moved up from JV. She defeated Taylor Gray of Rogers, 6-2, 6-1, and Zoe Pollack of South Kingstown, 7-5, 6-1. “Elle has worked hard to imrpove her game over the summer and it showed during preseason ladder matches,” coach Keegan said. “She’ll only continue to get better as she gets more comfortable with playing singles.”

Doubles are strong too

Coach Keegan likes what he sees from his doubles teams. First doubles team consists of senior tri-captains, Aditi Mehta and Emily Marino, who had a lot of success pairing up last season. This year they beat Ciarra Caulfield and Brynn Palmer of Rogers, 6-1, 6-0 and Abriella Guertin and Danica Mason of South Kingstown, 6-2, 6-4. “The two are close friends off the court and have the communication on the court, plus the experience as partners. They will be a strong team for us,” said coach Keegan.

Second doubles team pairs junior Zelda Hayes with sophomore Lacey Dufficy and third doubles is sophomore Siena Sousa and sophomore Sydney DiChiappari. “All played Junior Varsity last season and are all strong players. Once we key in and fix the unforced errors the teams should be forces to be reckoned with and a big part of the future of the program,” coach Keegan said. Hayes and Dufficy beat their Rogers opponents in straight sets, but lost a tie breaker to the South Kingstown's Alexa Rollins and Avery Birrell, 6-3, 1-6, 7-6 (7-5).

“It's a close knit team and they put team success first, which is rewarding to see as a coach,” said coach Keegan. “Especially after every twist and turn the last year has brought these students. At the end of the day, it's truly what sports is all about and I'm glad that this program can be the outlet for that.”