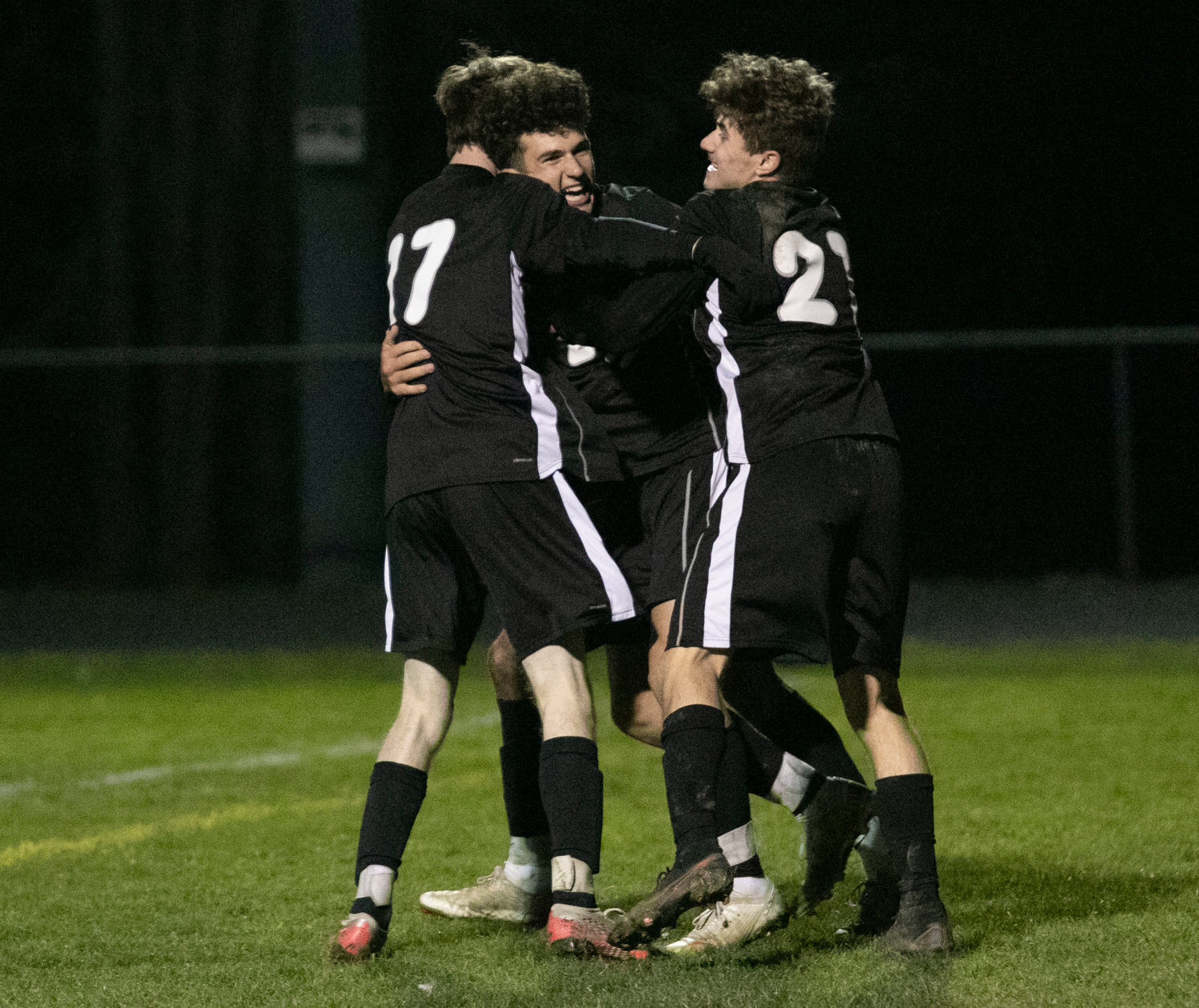 Dylan Brol (left) and Justin Mendes (right) give Parker Camelo a big hug after he scored to give Mt. Hope a 2-0 lead in the second half. The Huskies went on to beat Cranston West, 3-0 and move on the the semifinals.
Photos by Richard W. Dionne, Jr. 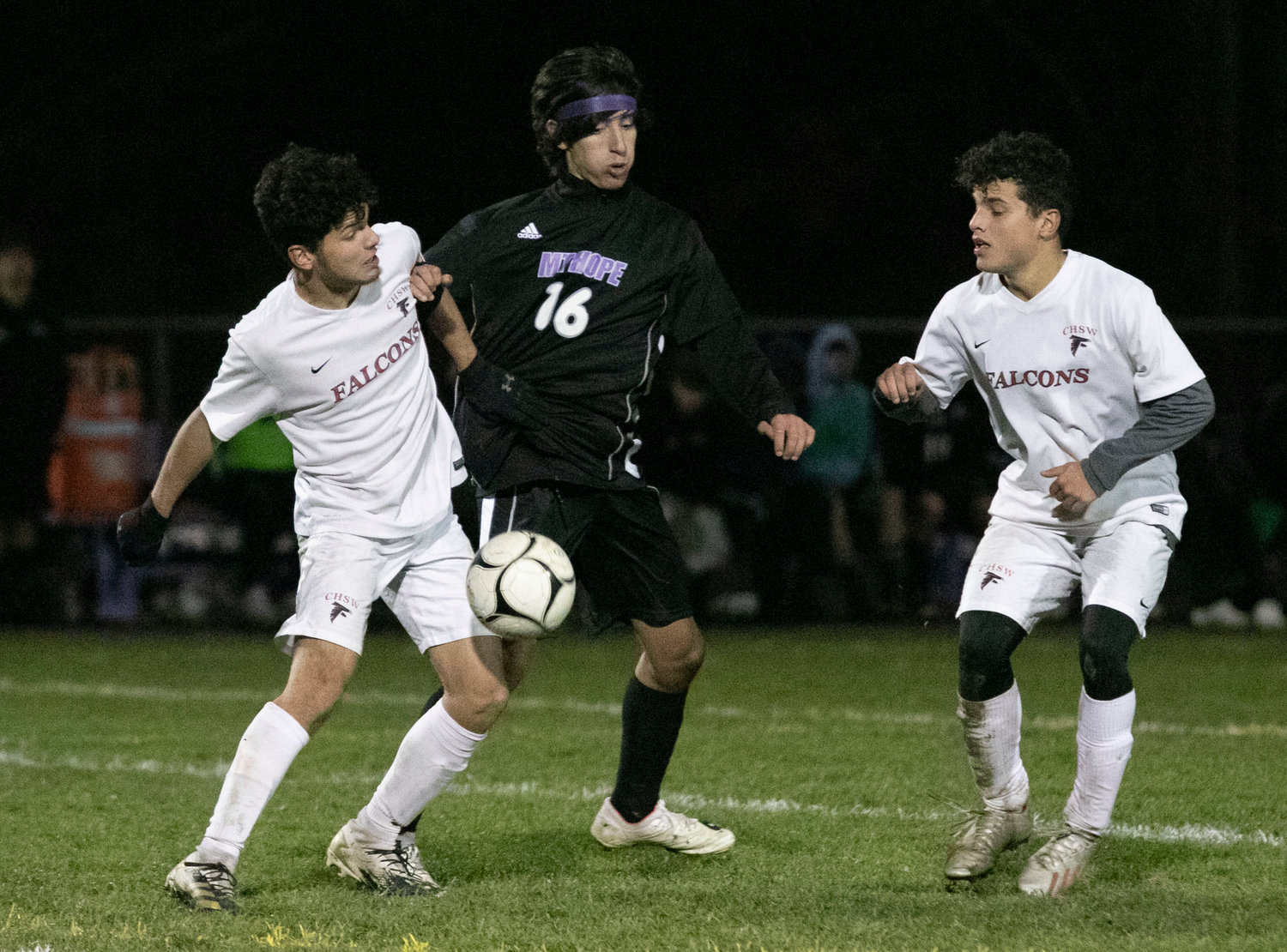 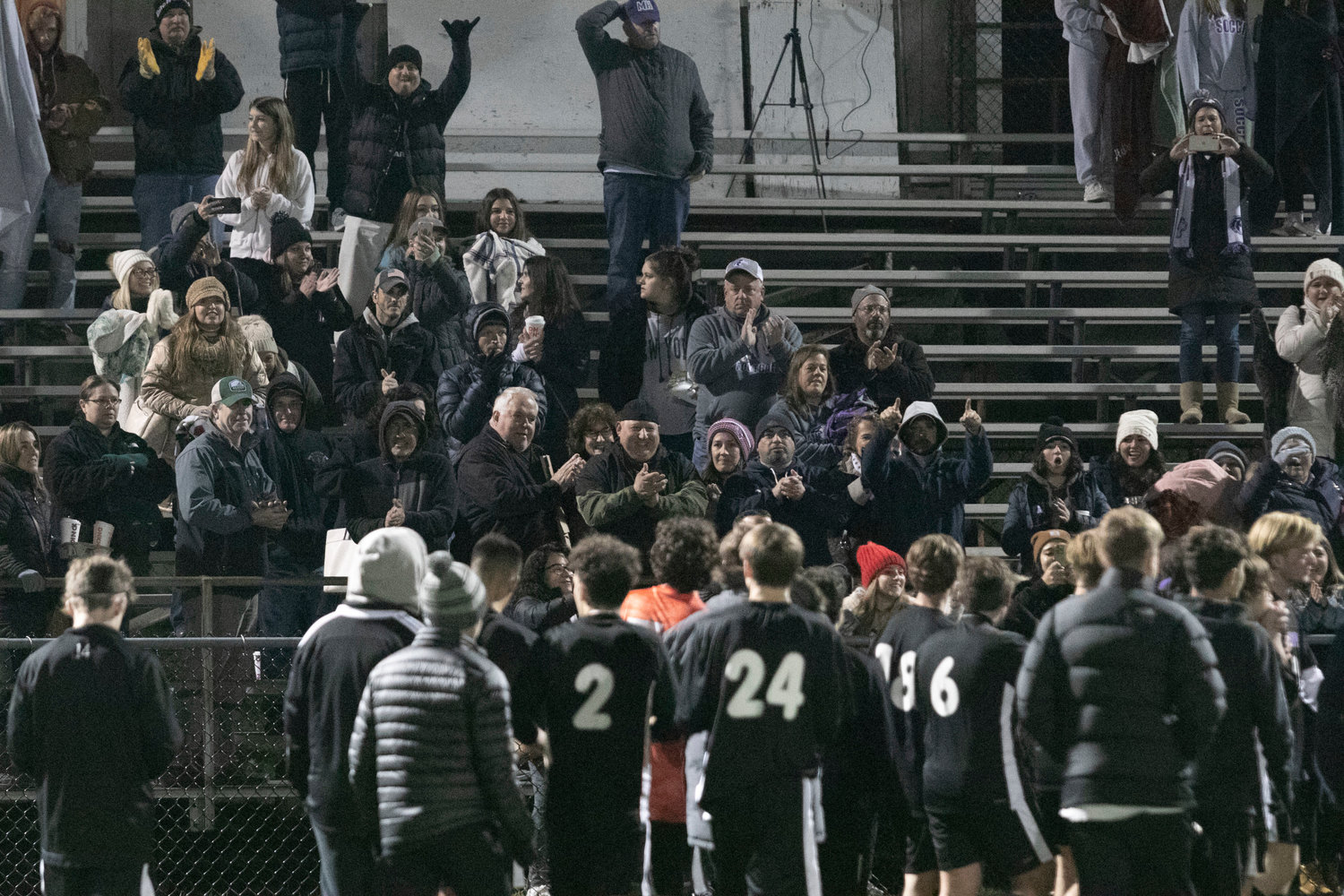 Fans cheer on the team after the quarterfinals win. 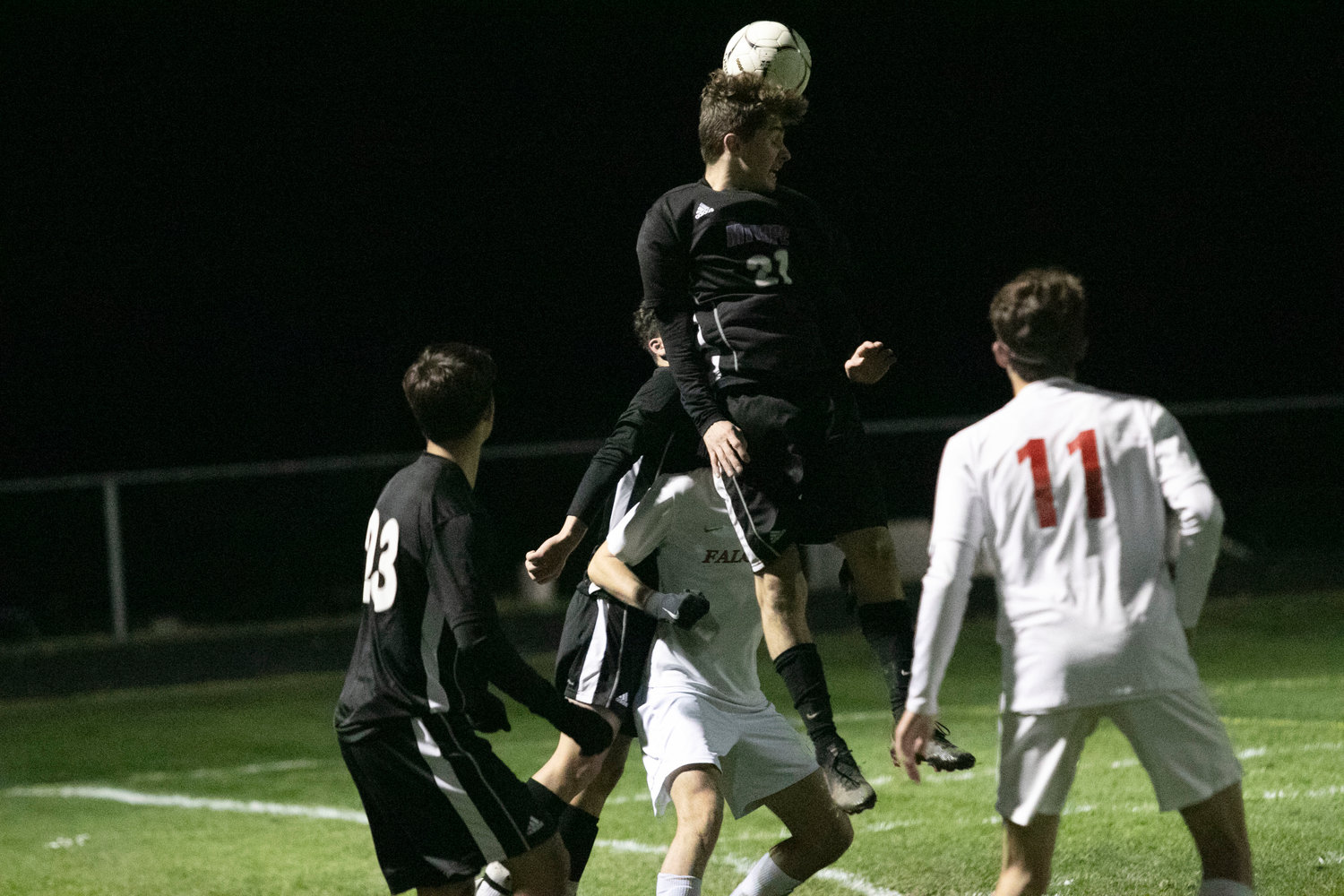 Midfielder Jesse Wilson (left) looks on as Justin Mendes heads a throw in out of harm's way. 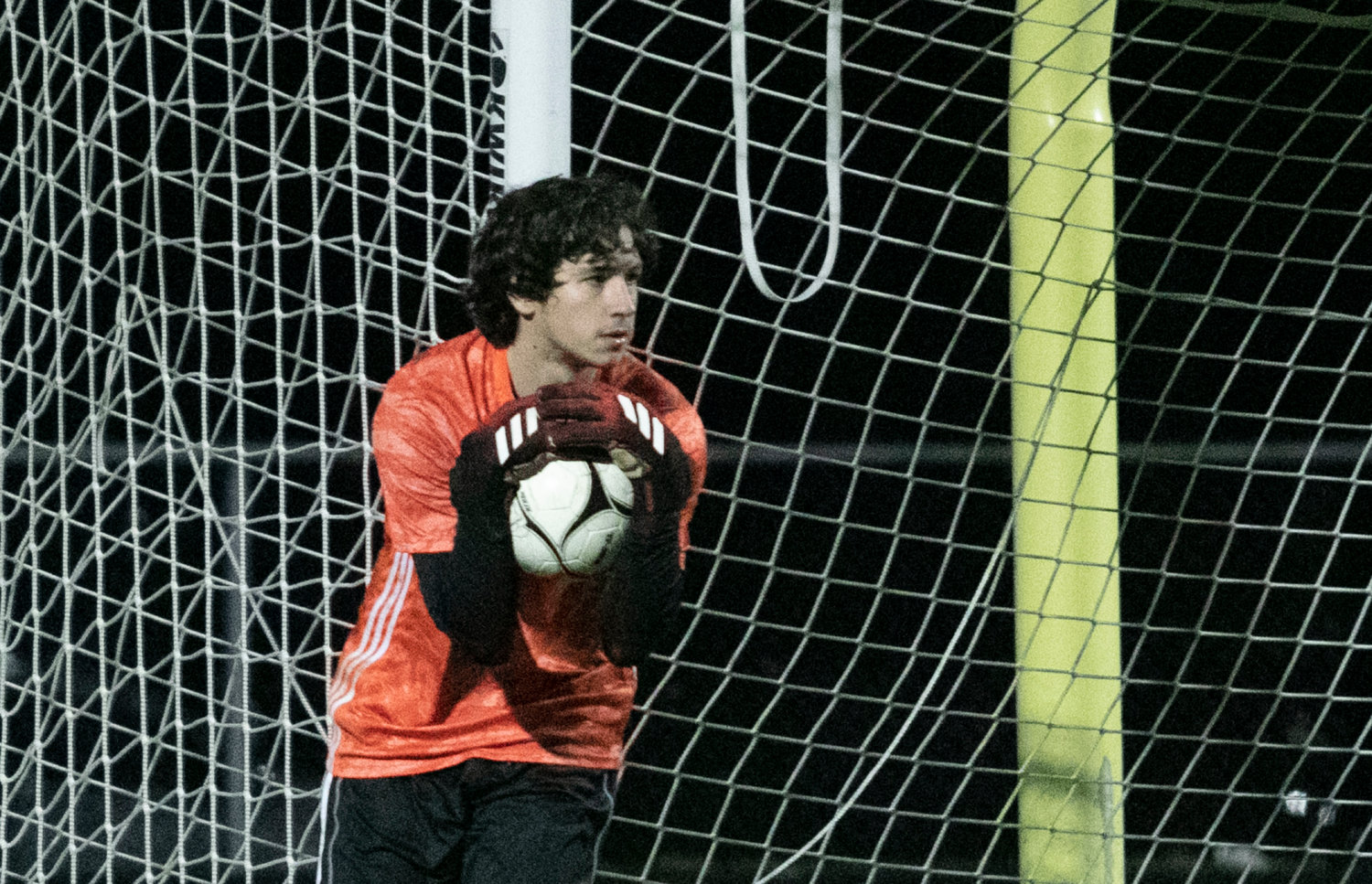 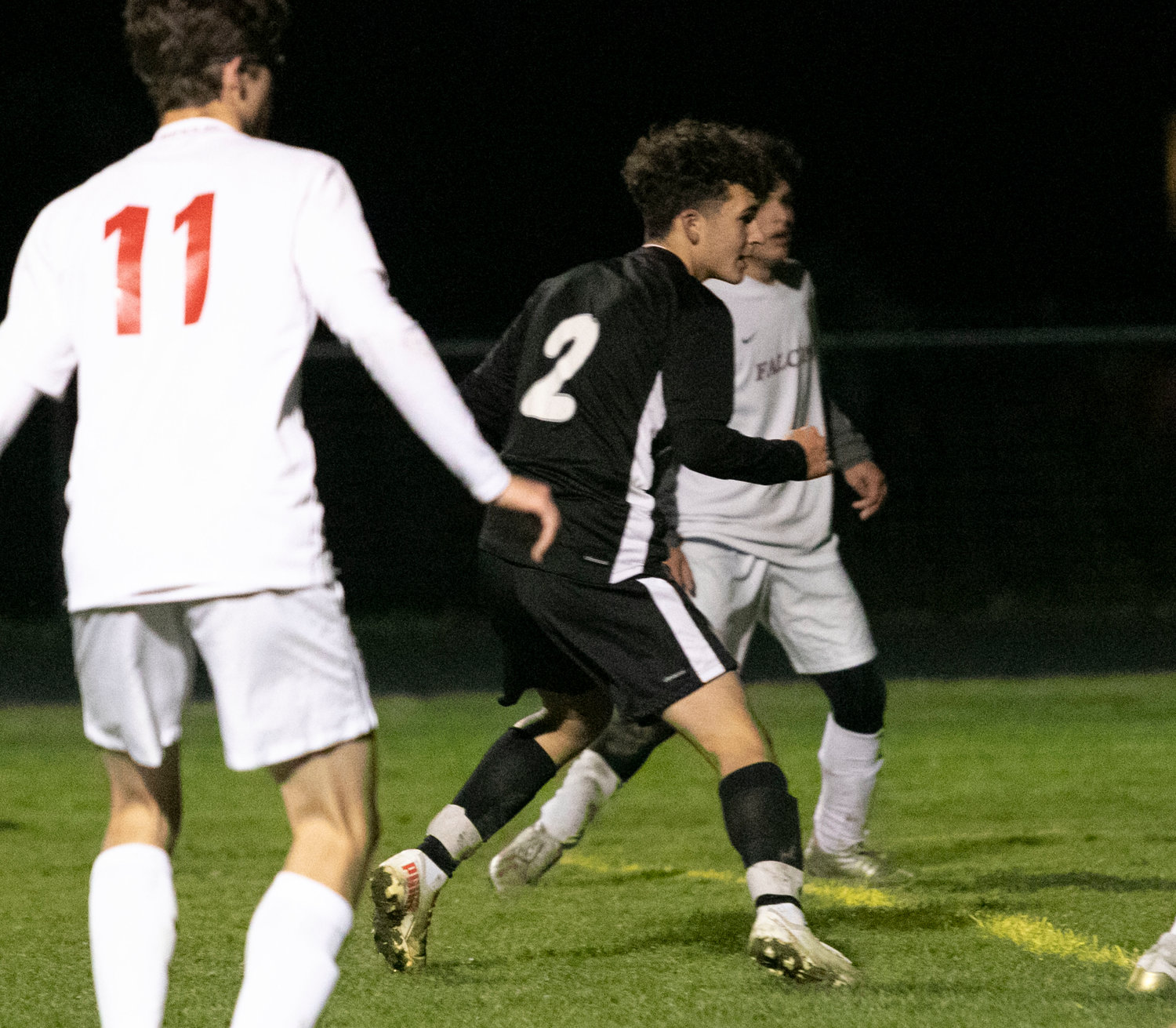 Parker Camelo watches his kick go into the back of the net to put the Huskies up, 2-0. 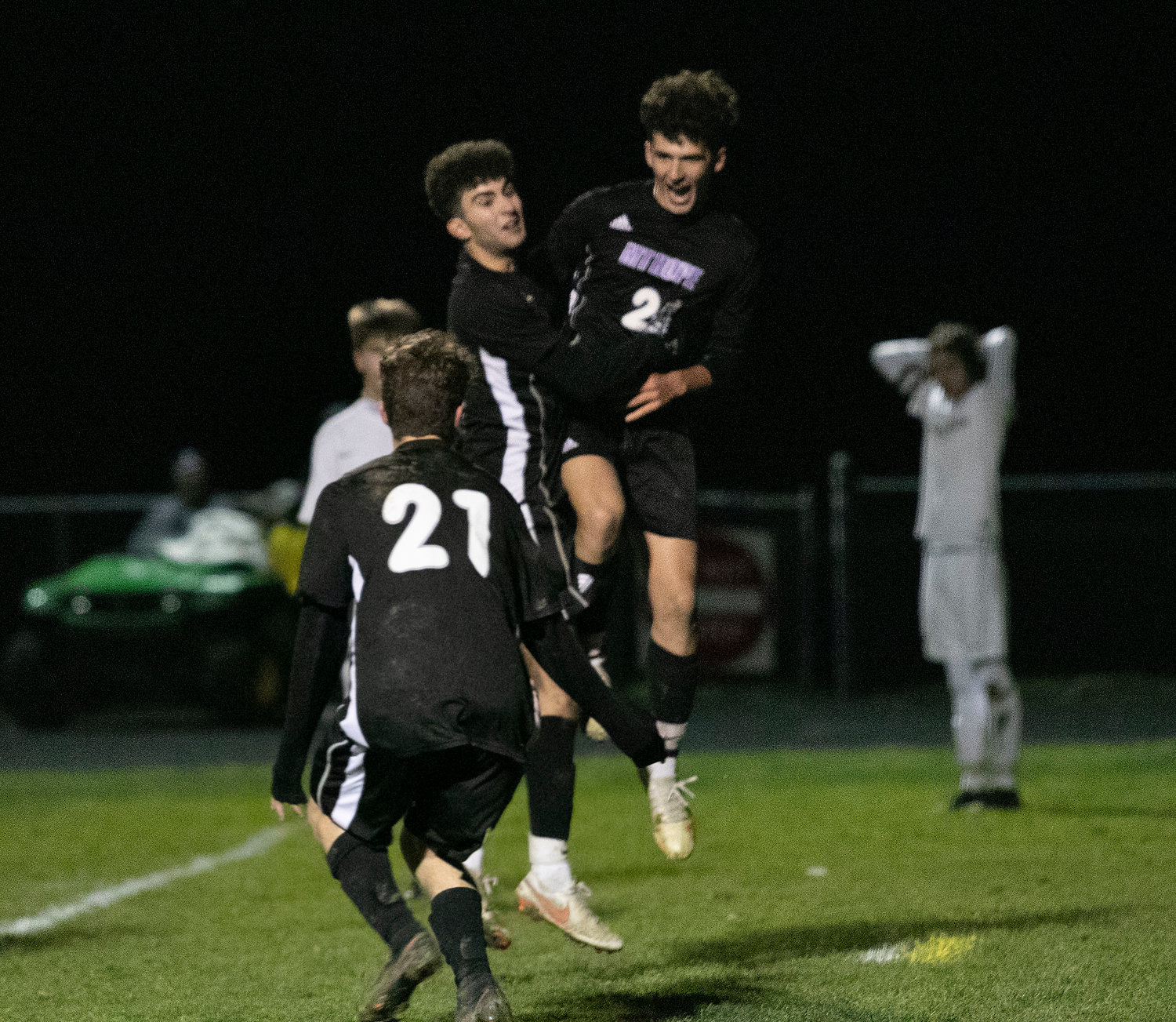 Justin Mendes (left), Noah Furtado and Parker Camelo celebrate after Camelo score in the second half to give the Huskies a 2-0 lead. 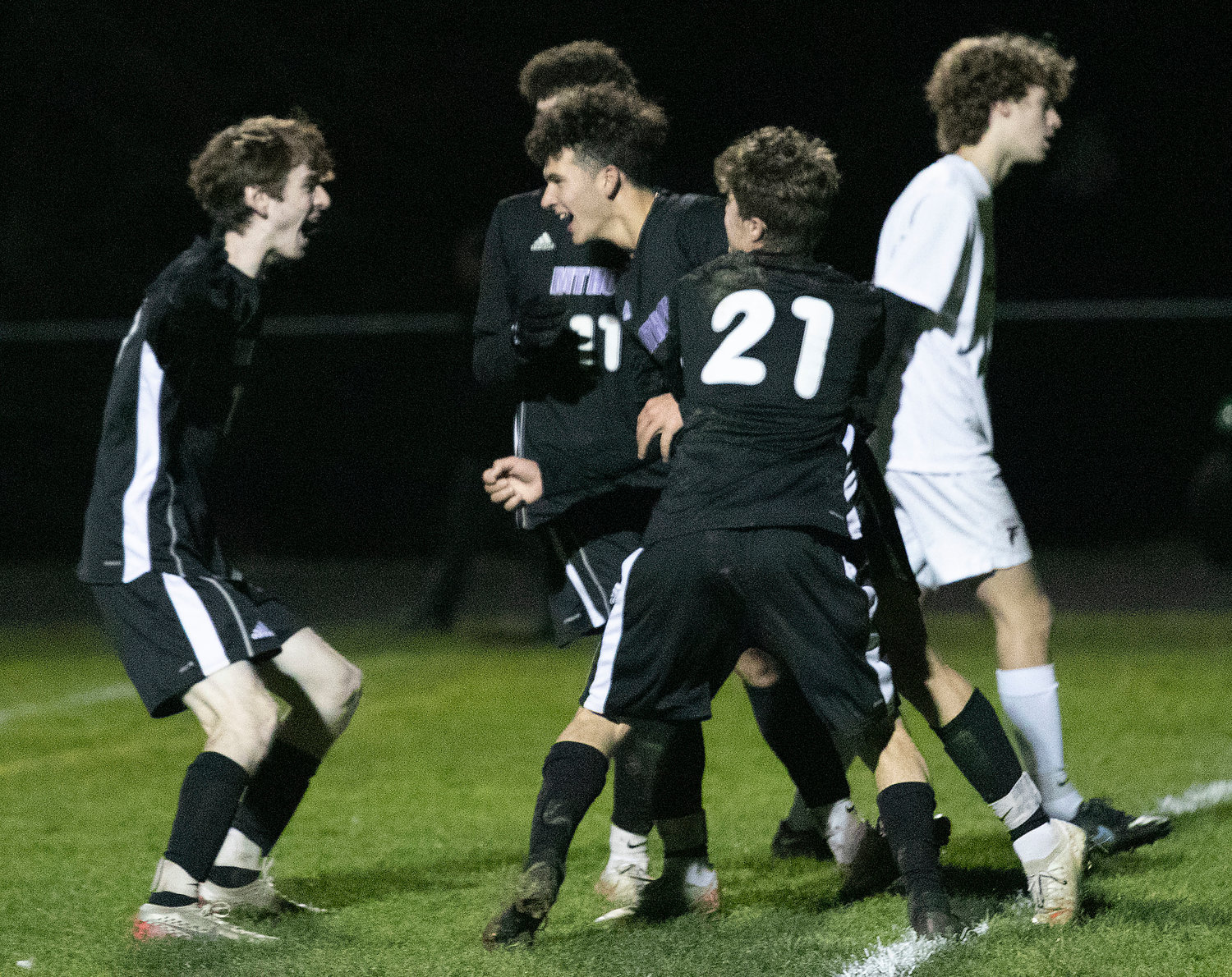 Teammates surround Camelo after the goal. 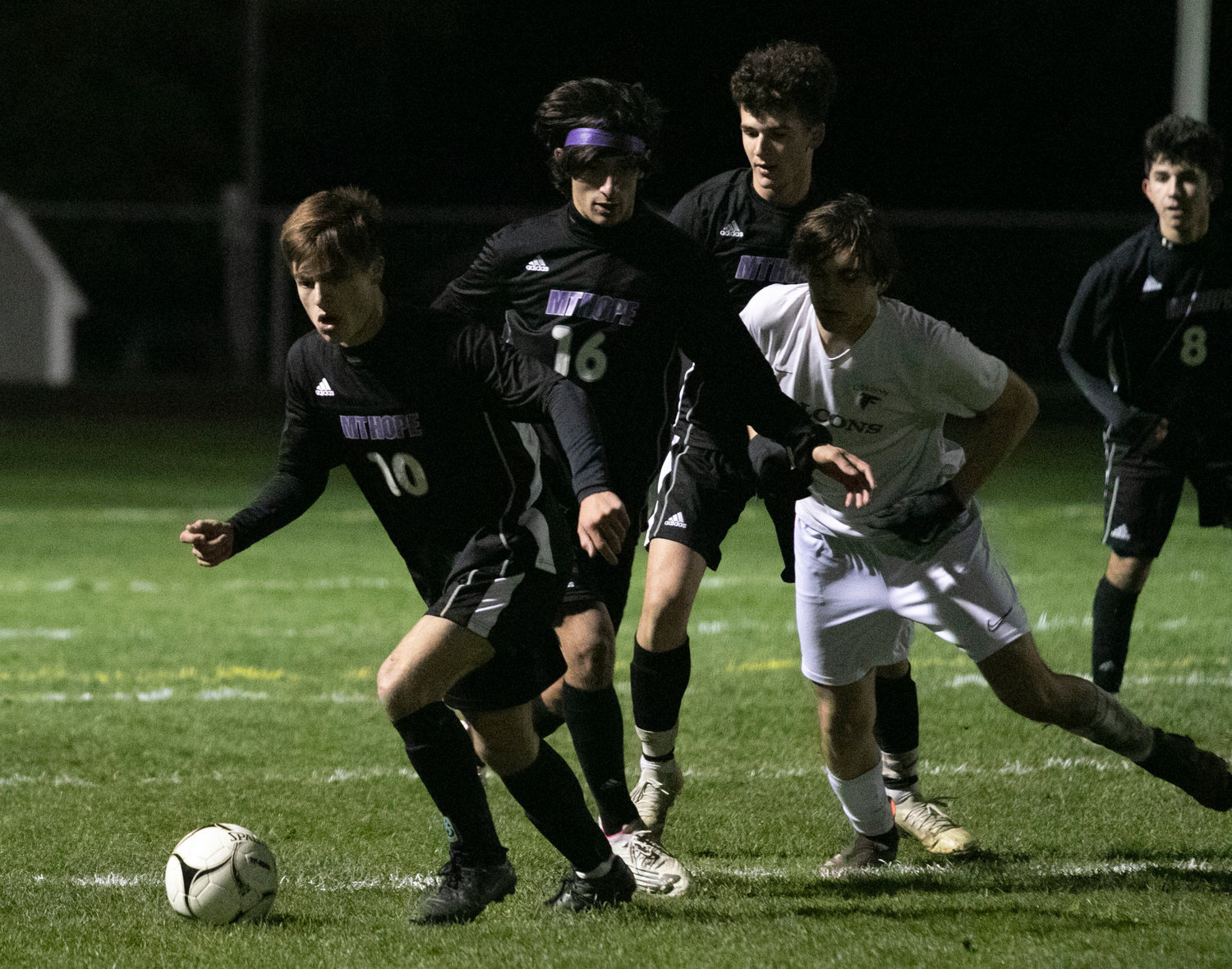 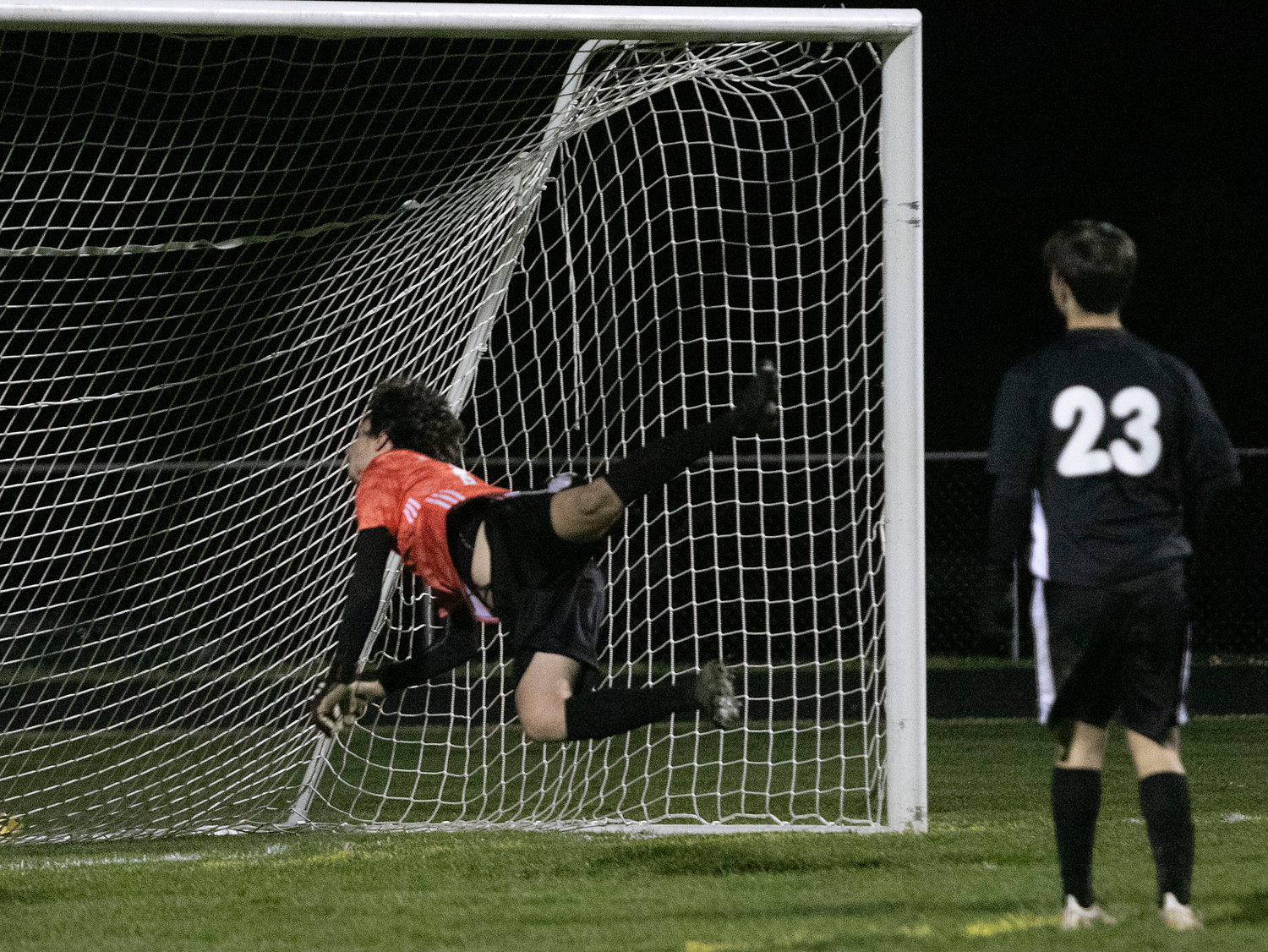 Terceiro falls back after punching the ball over the net for a save in the second half. 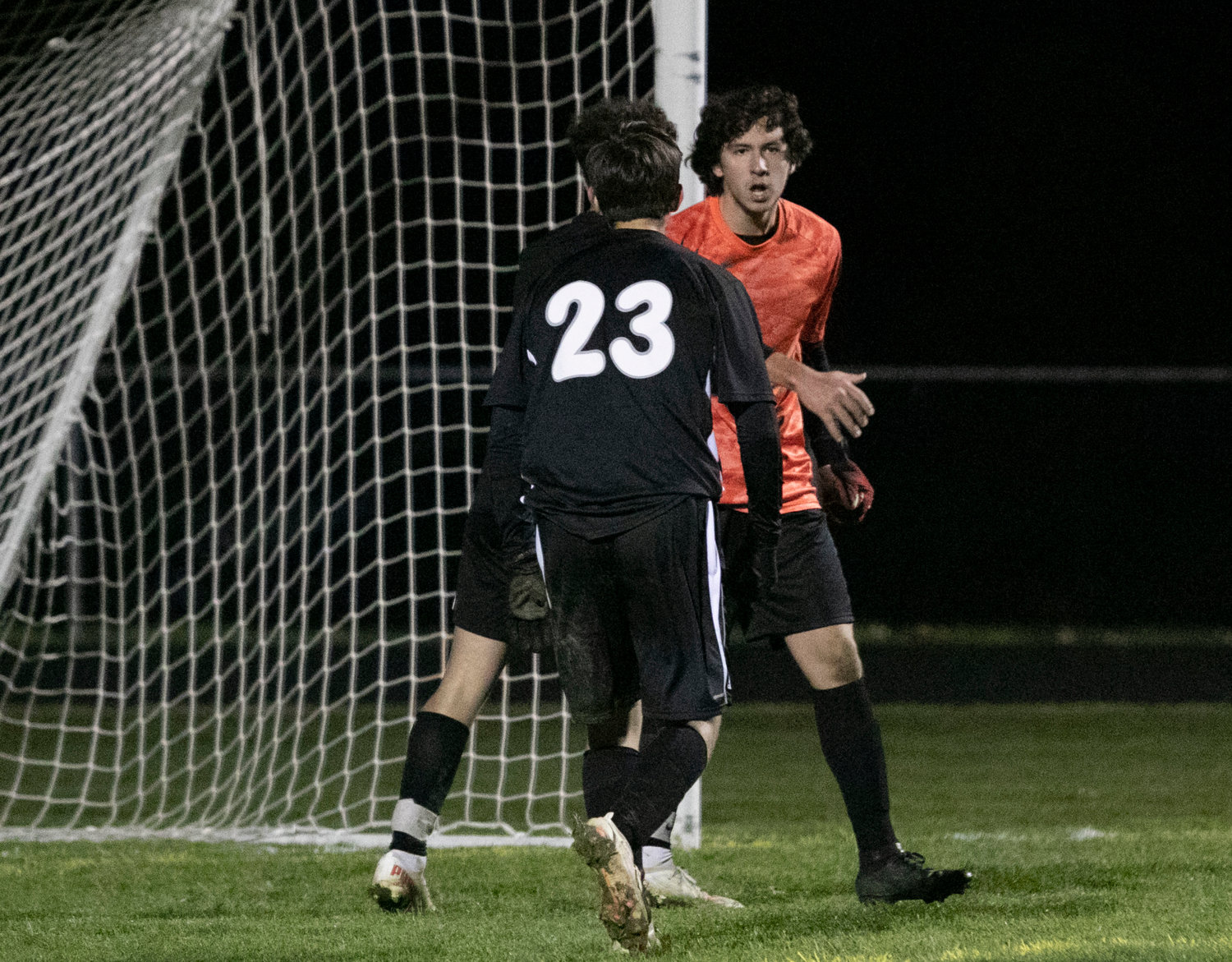 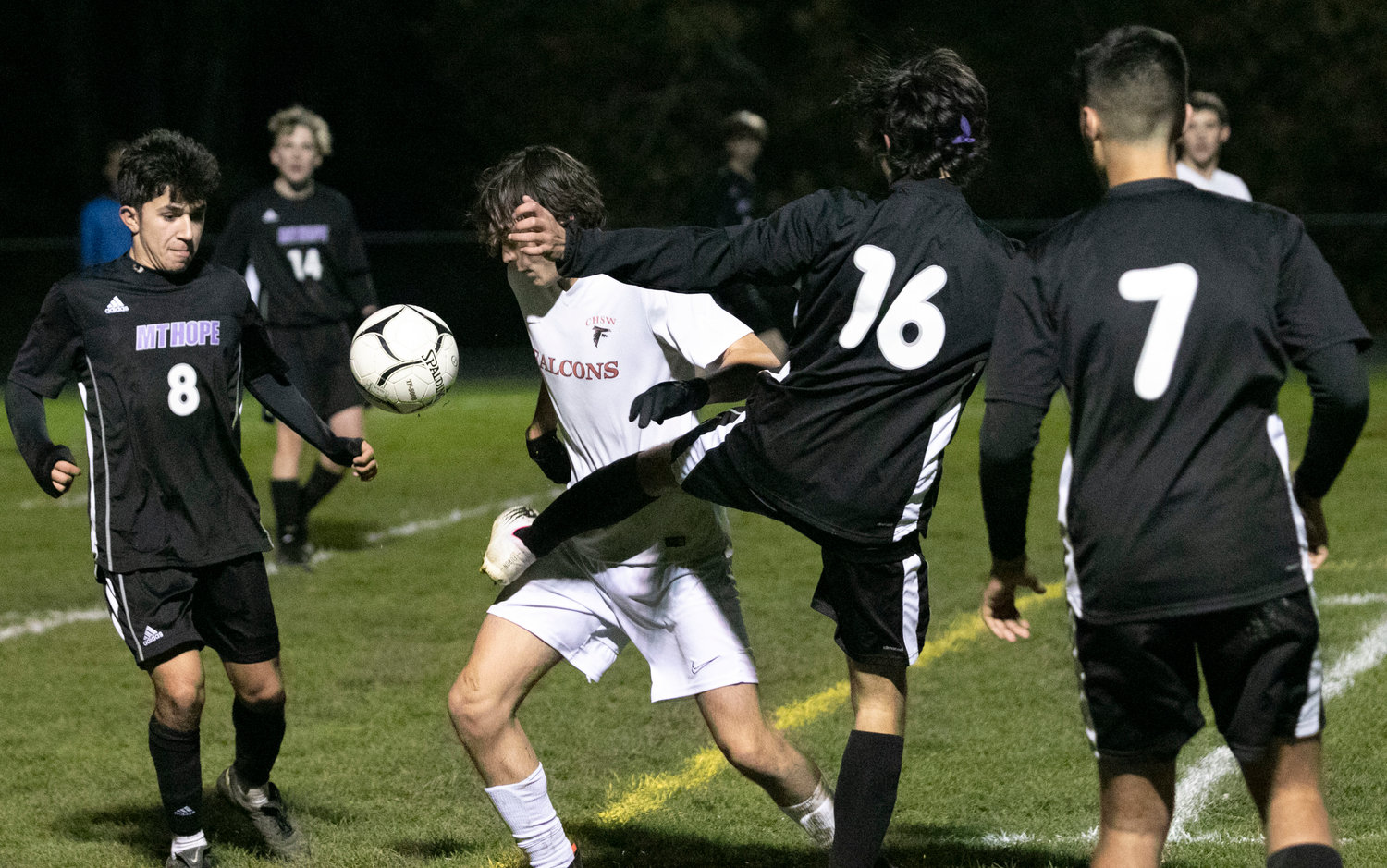 Chad Parente (left) Phil Berretto and Jayden Terra defend a throw in during the game. 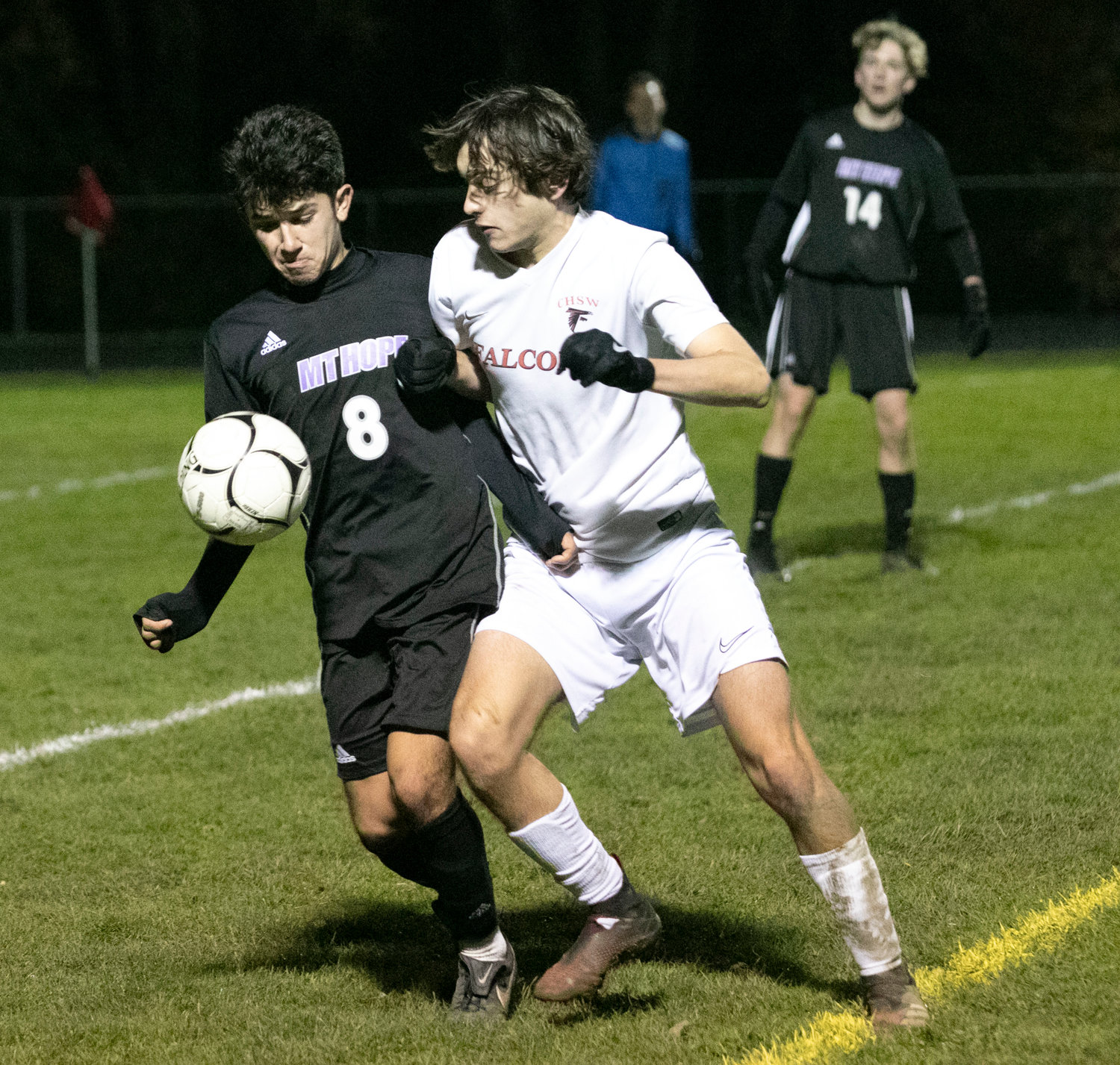 Chad Parente collects a pass and dribbles up field. 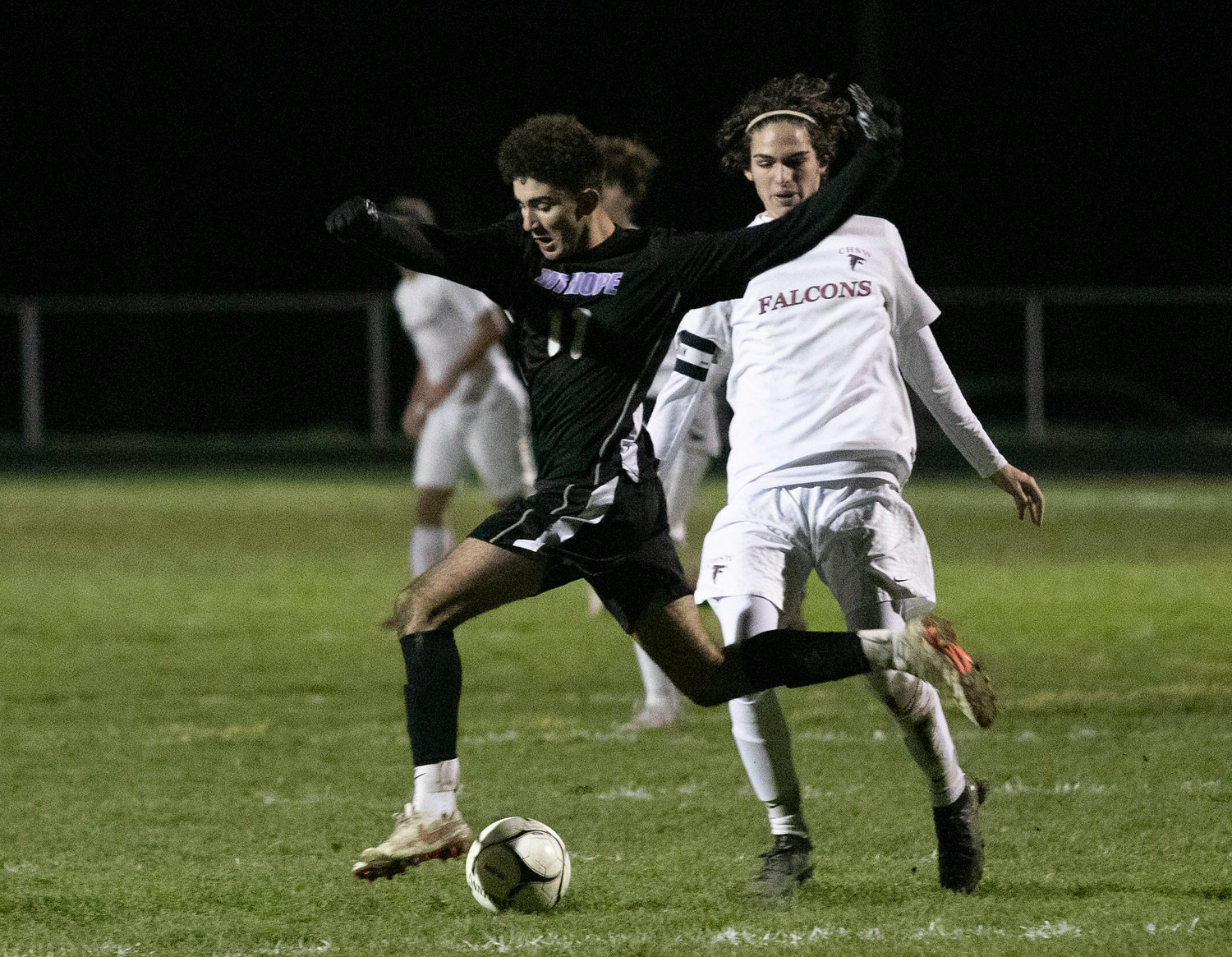 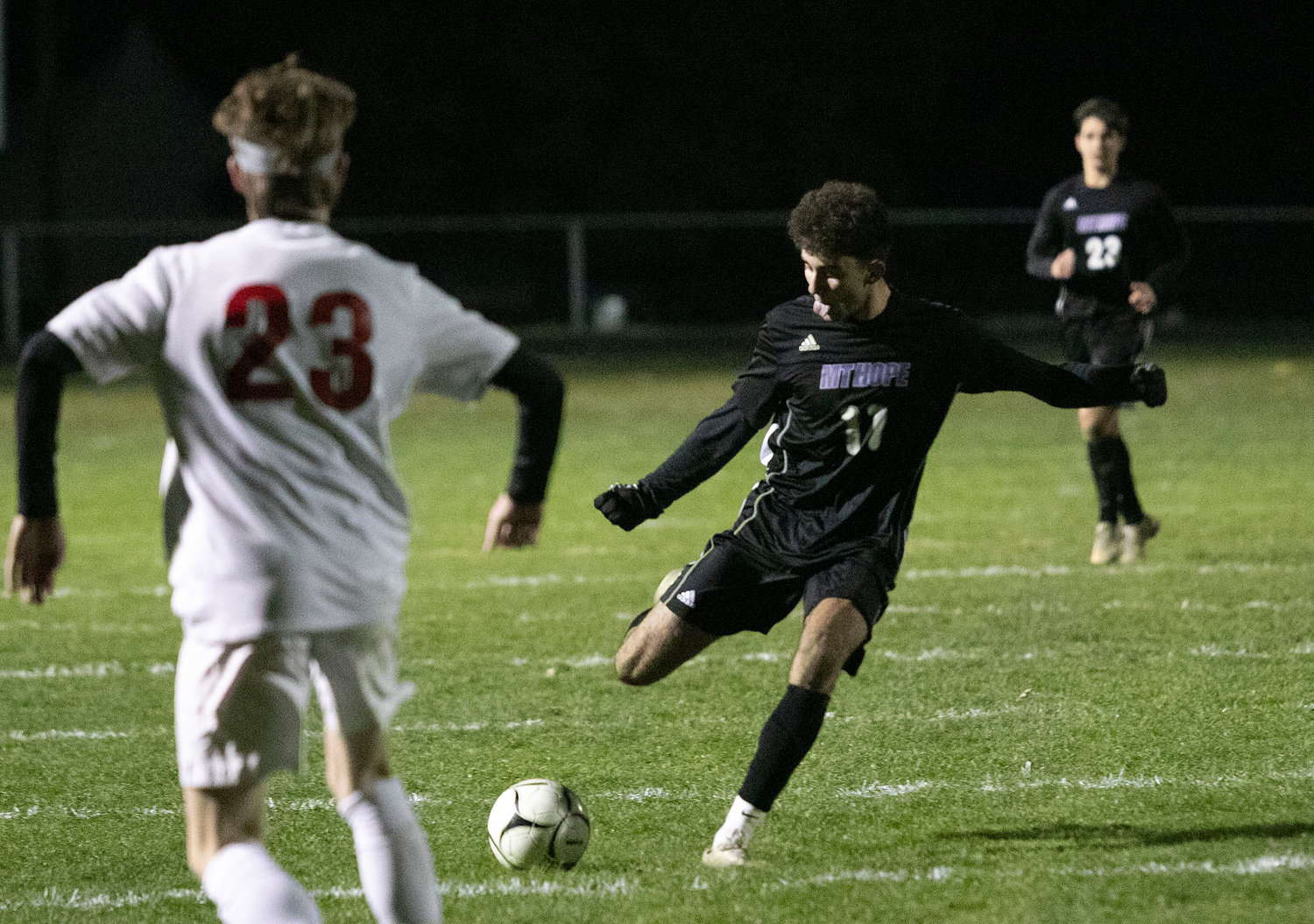 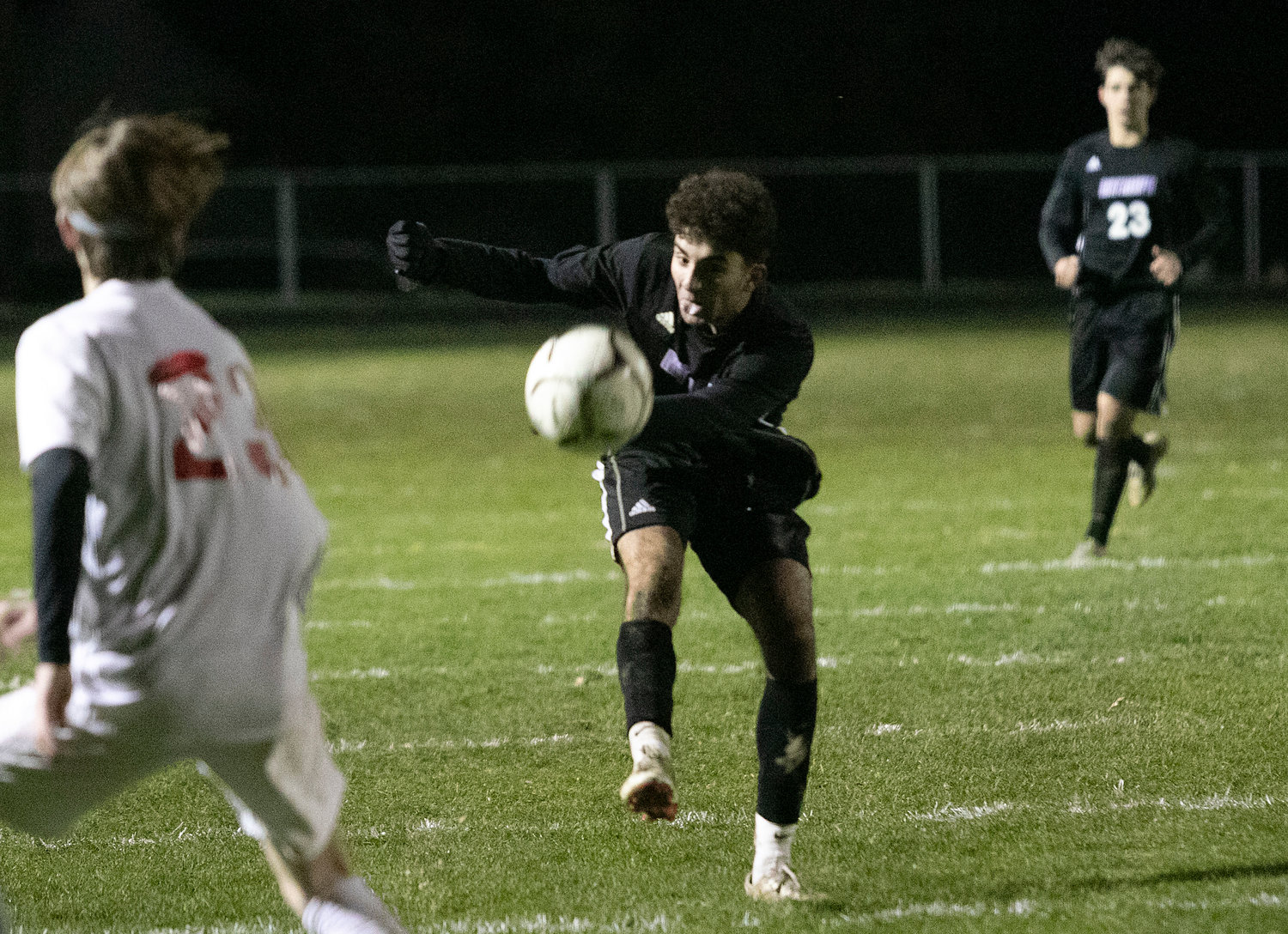 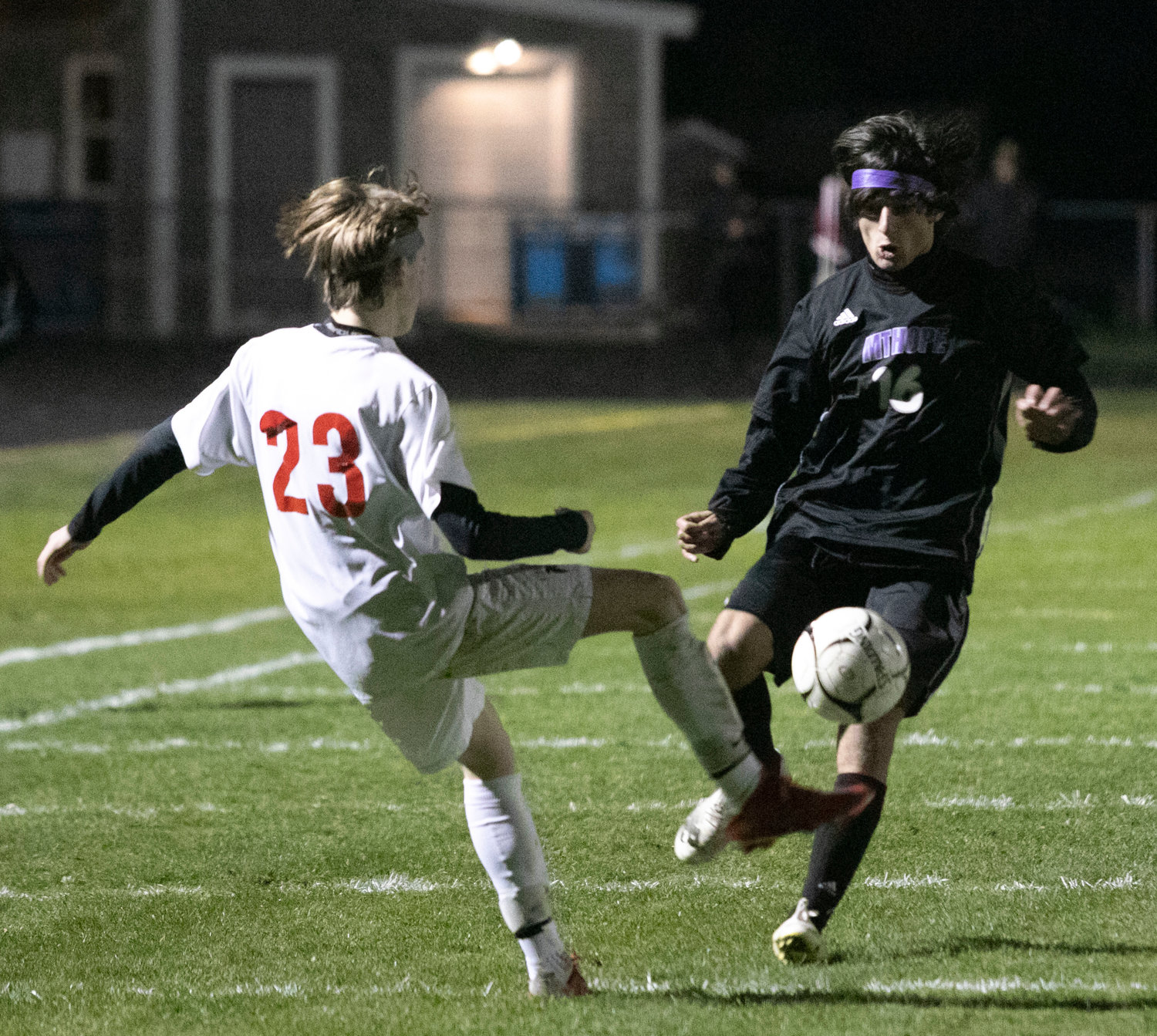 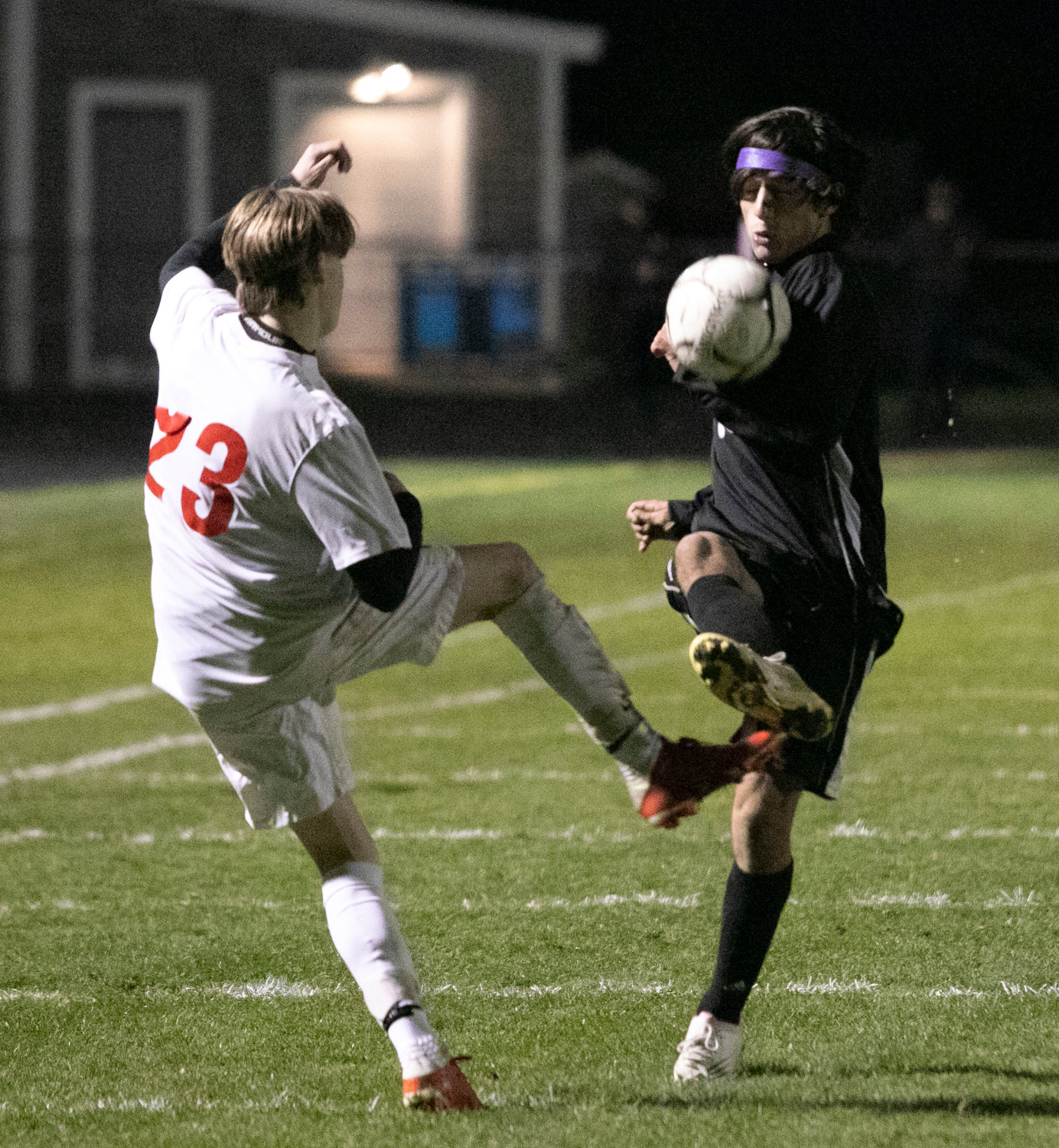 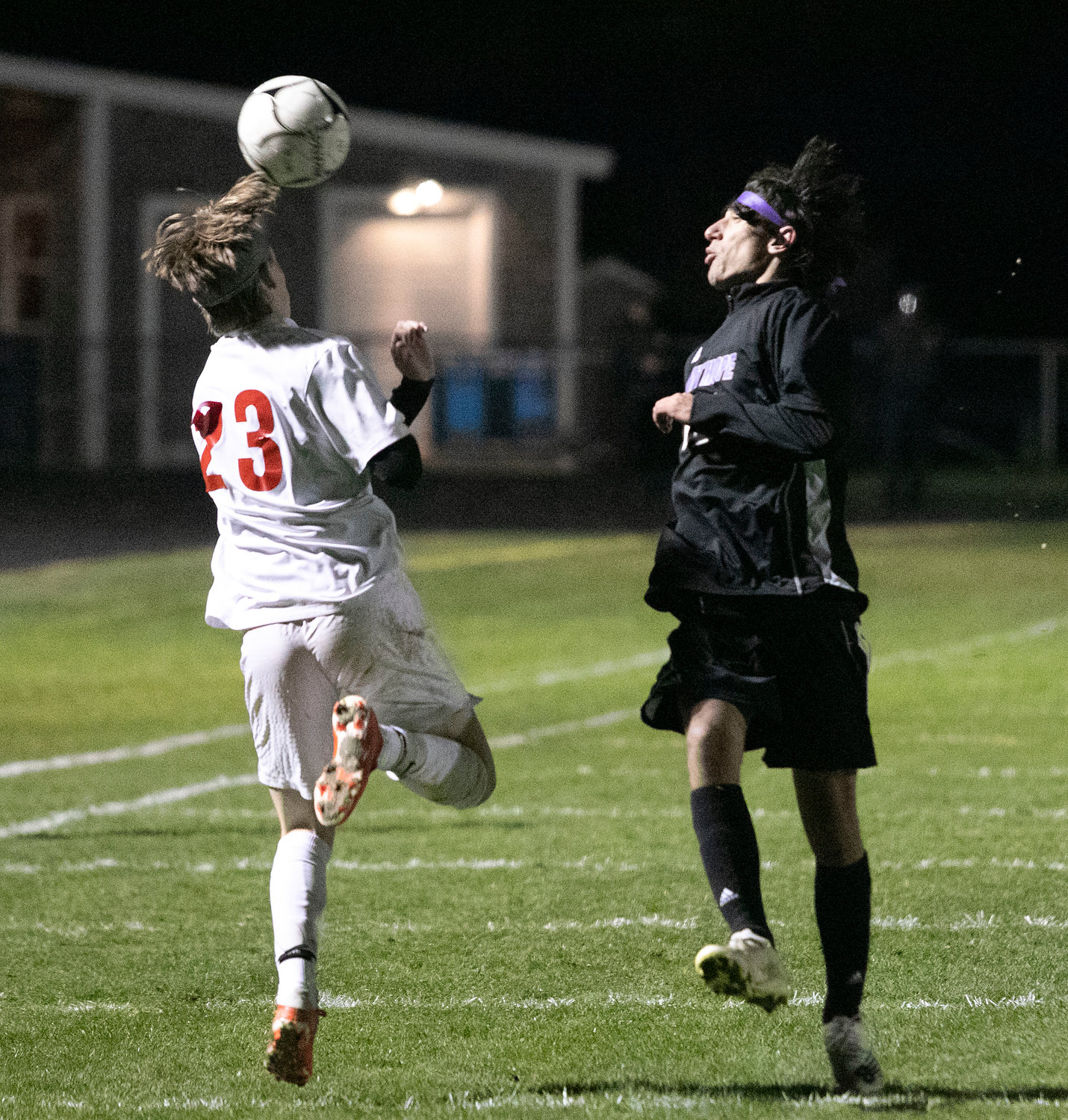 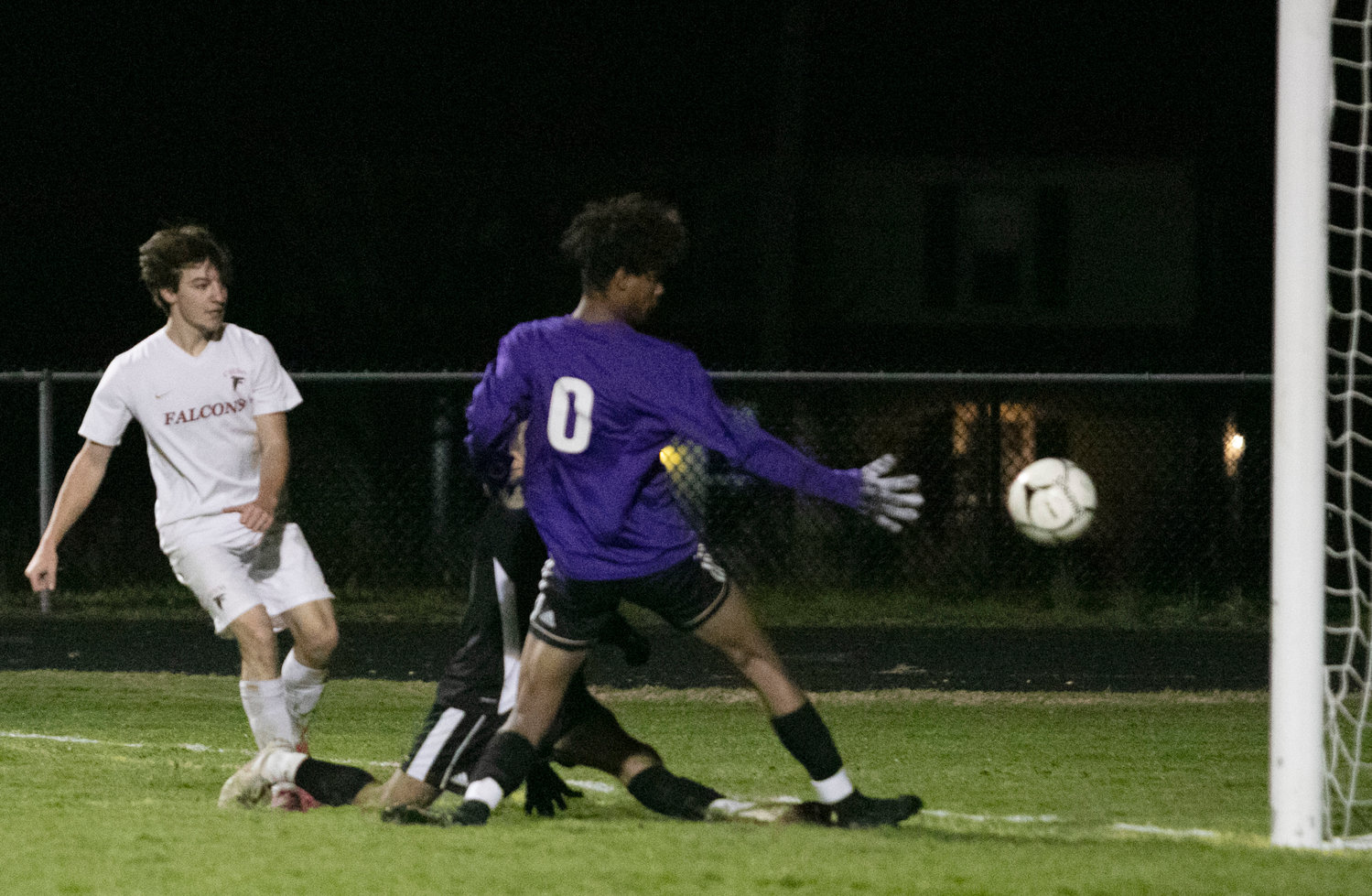 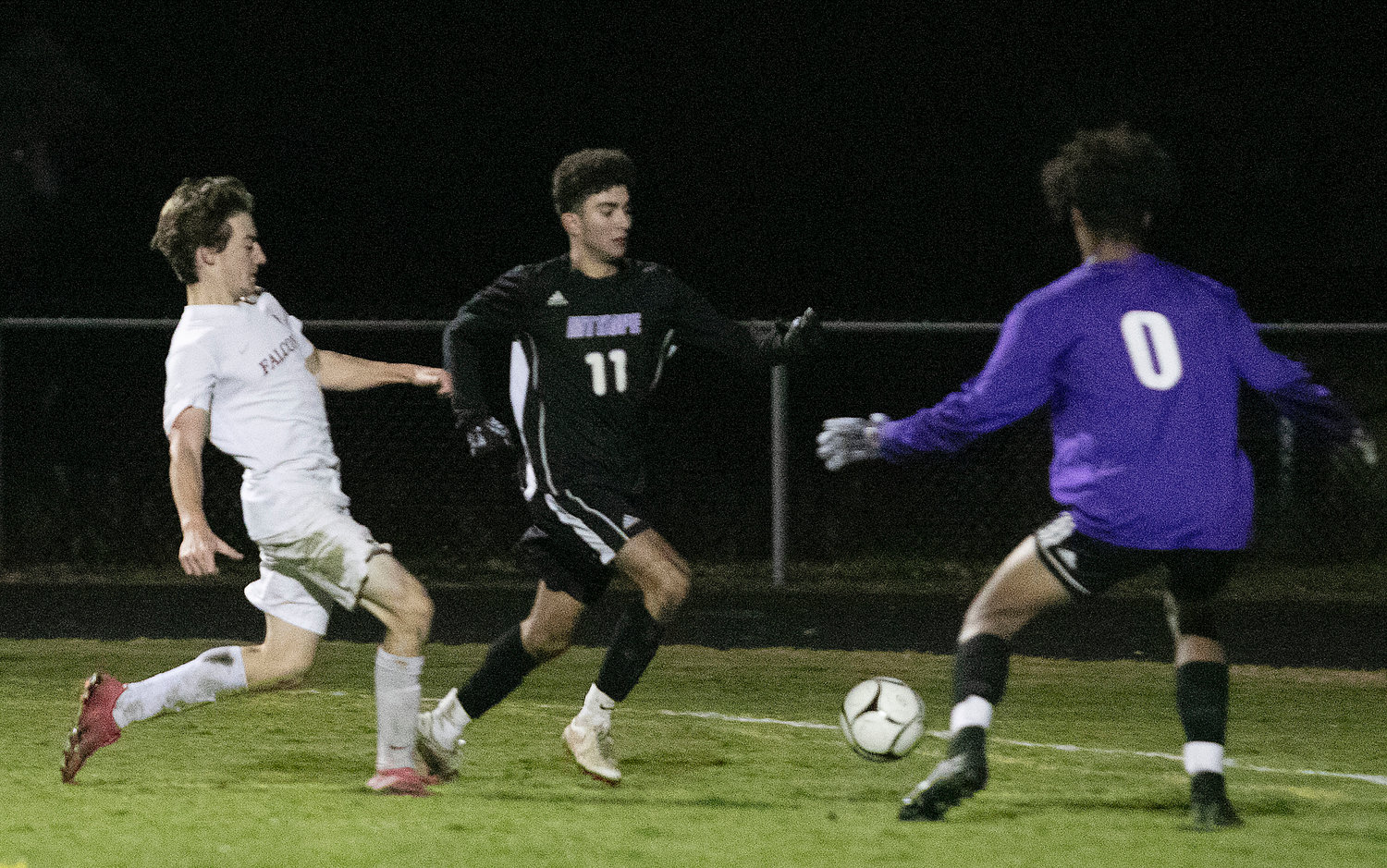 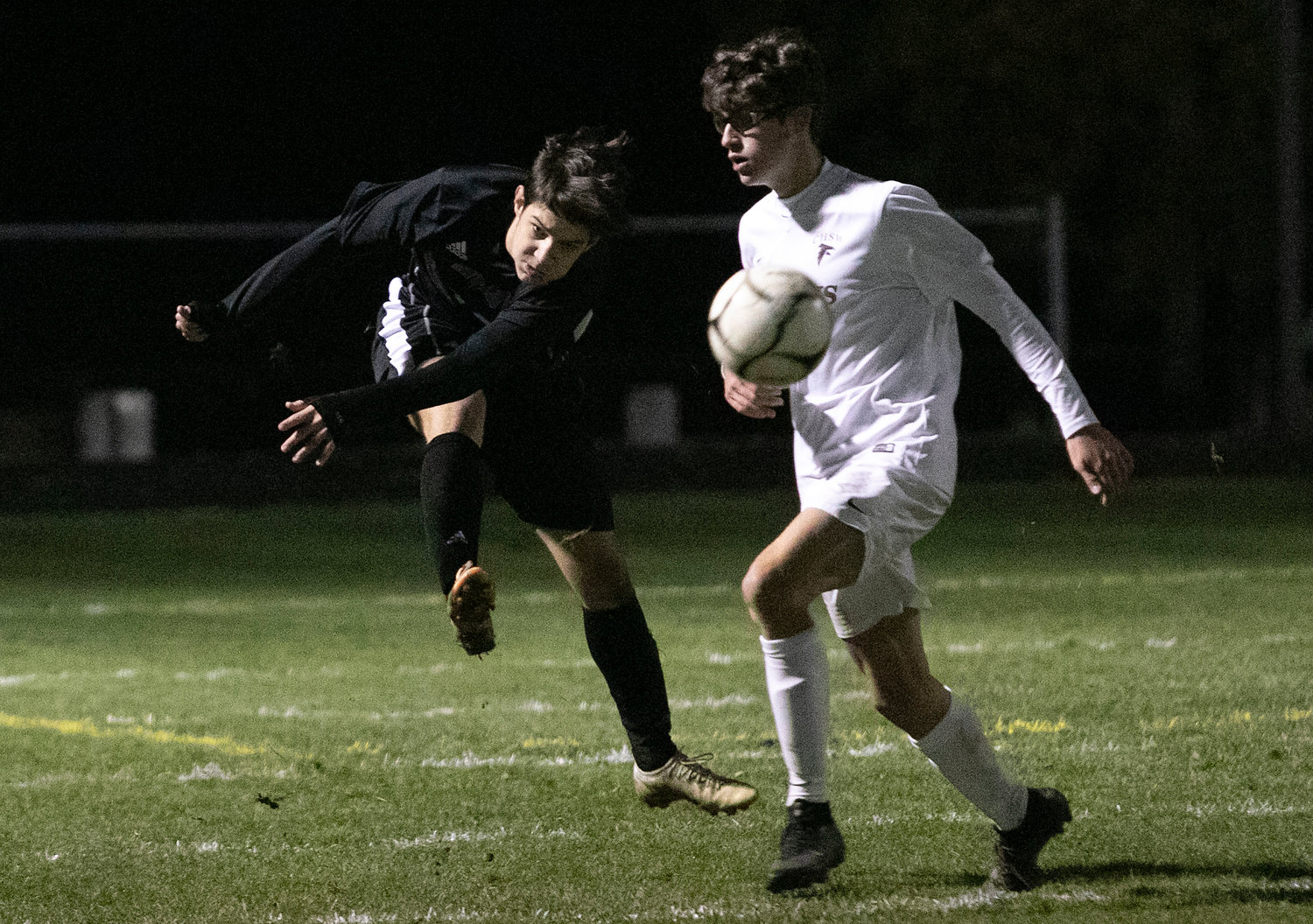 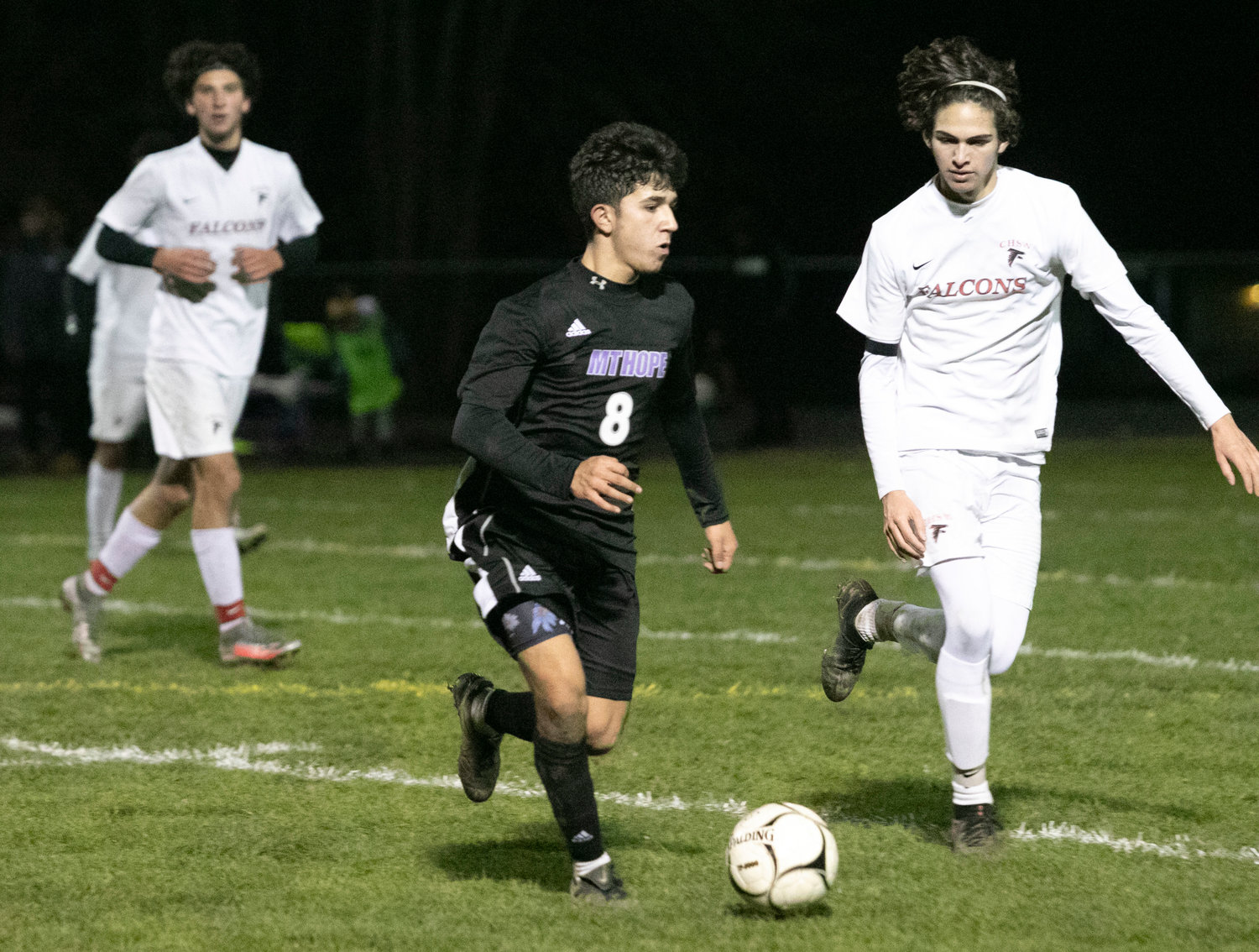 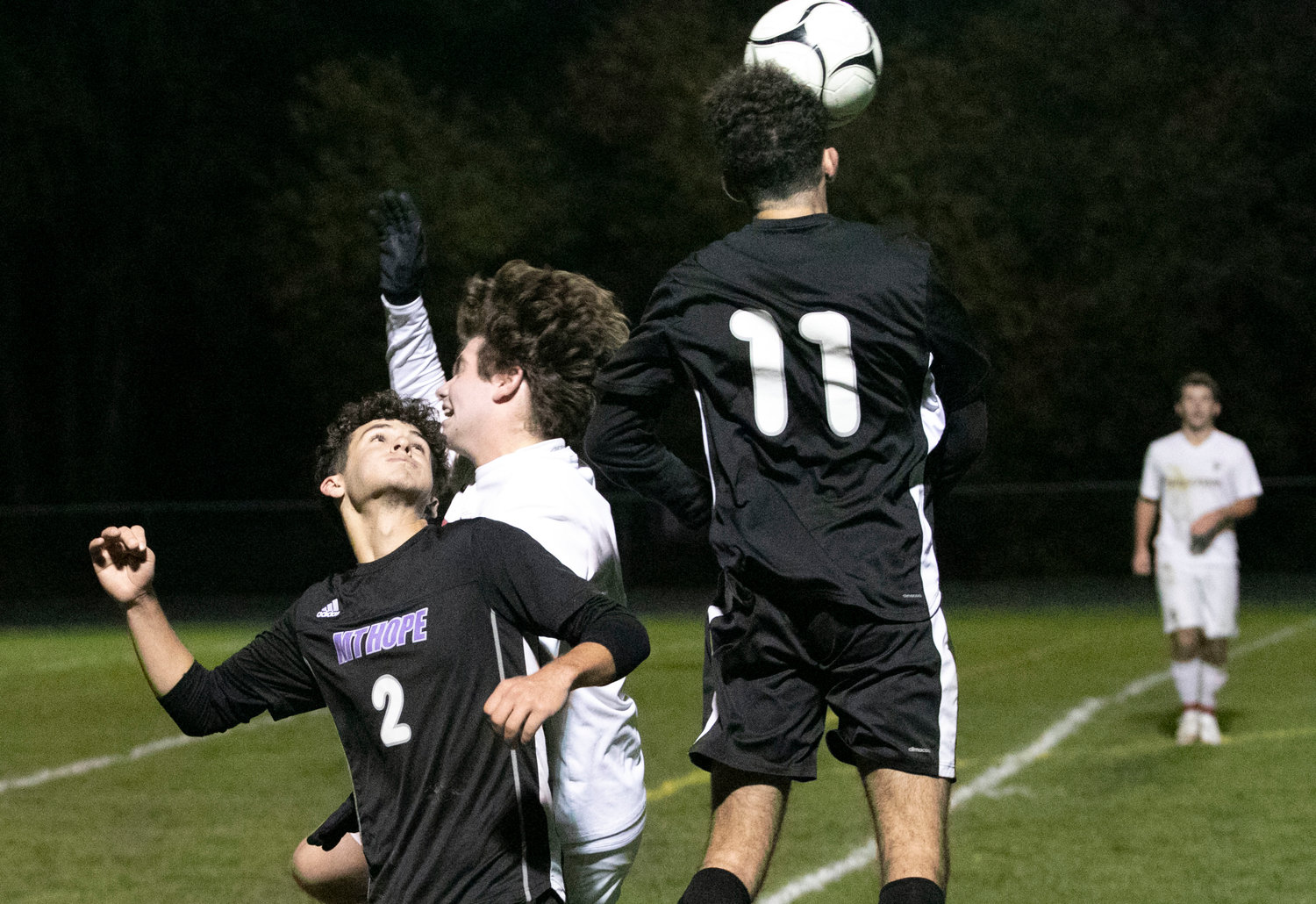 Parker Camelo (left) looks on as teammate Noah Furtado puts his head on a throw in. 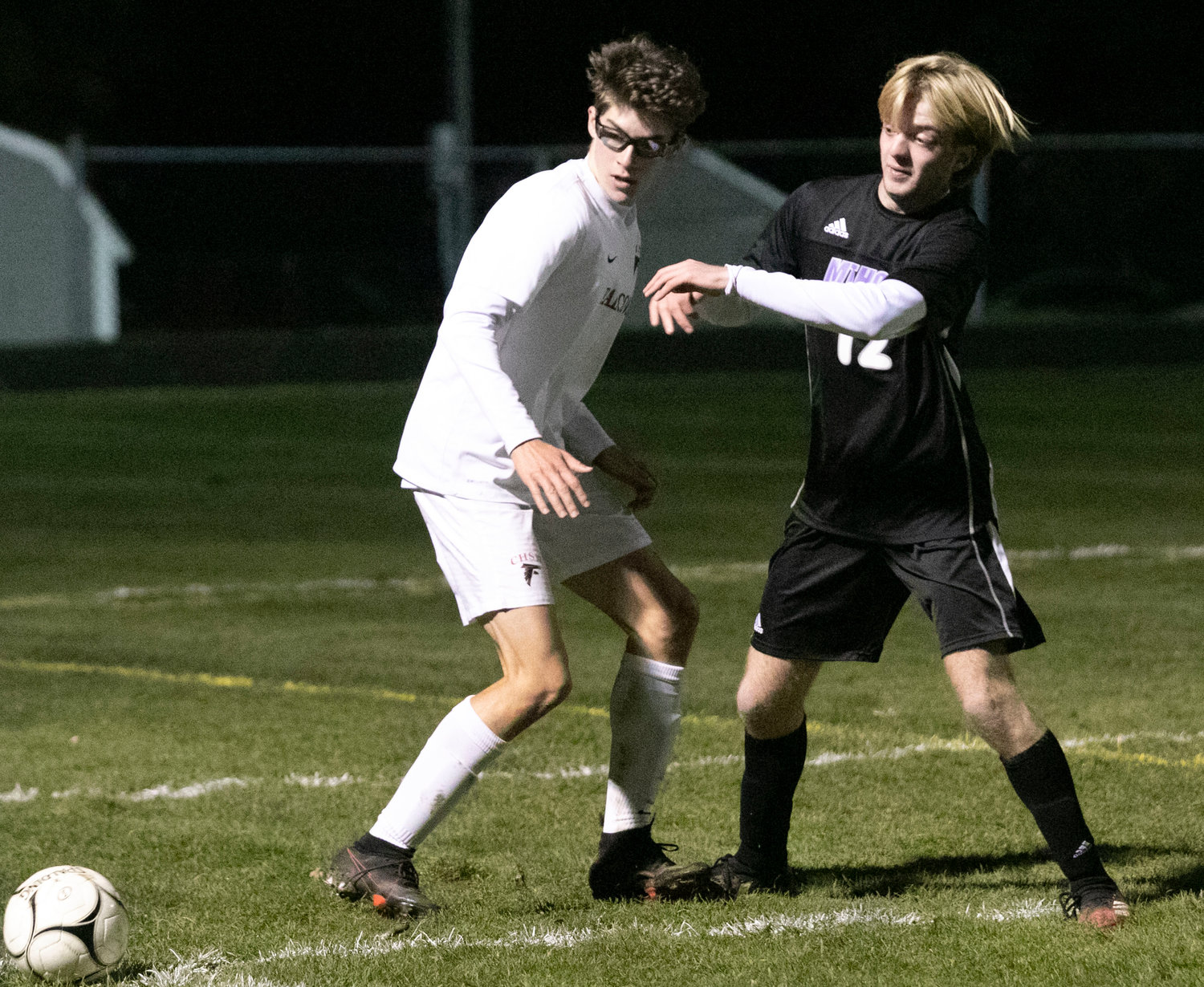 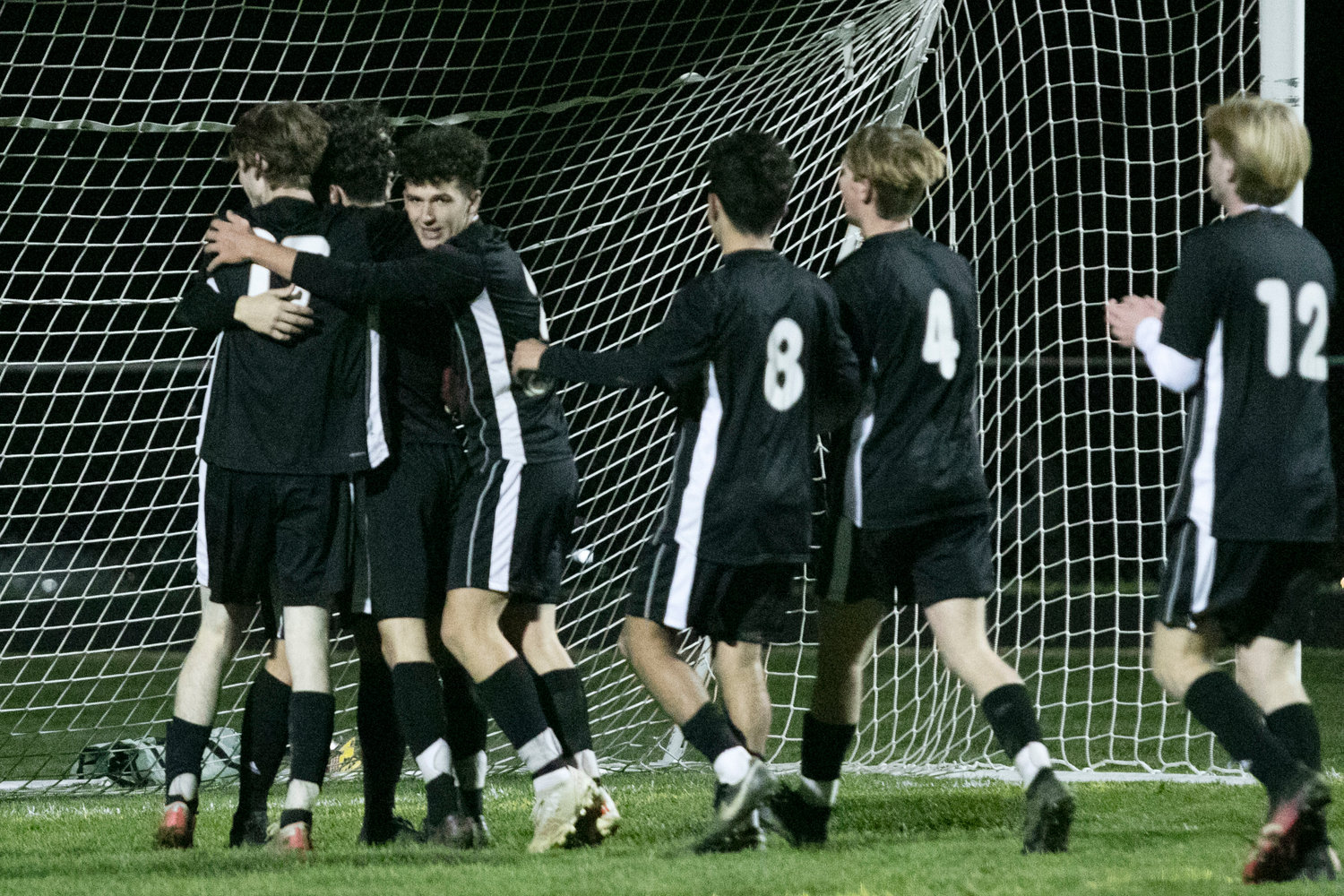 The team celebrates with goalkeeper Matt Terceiro after the game. 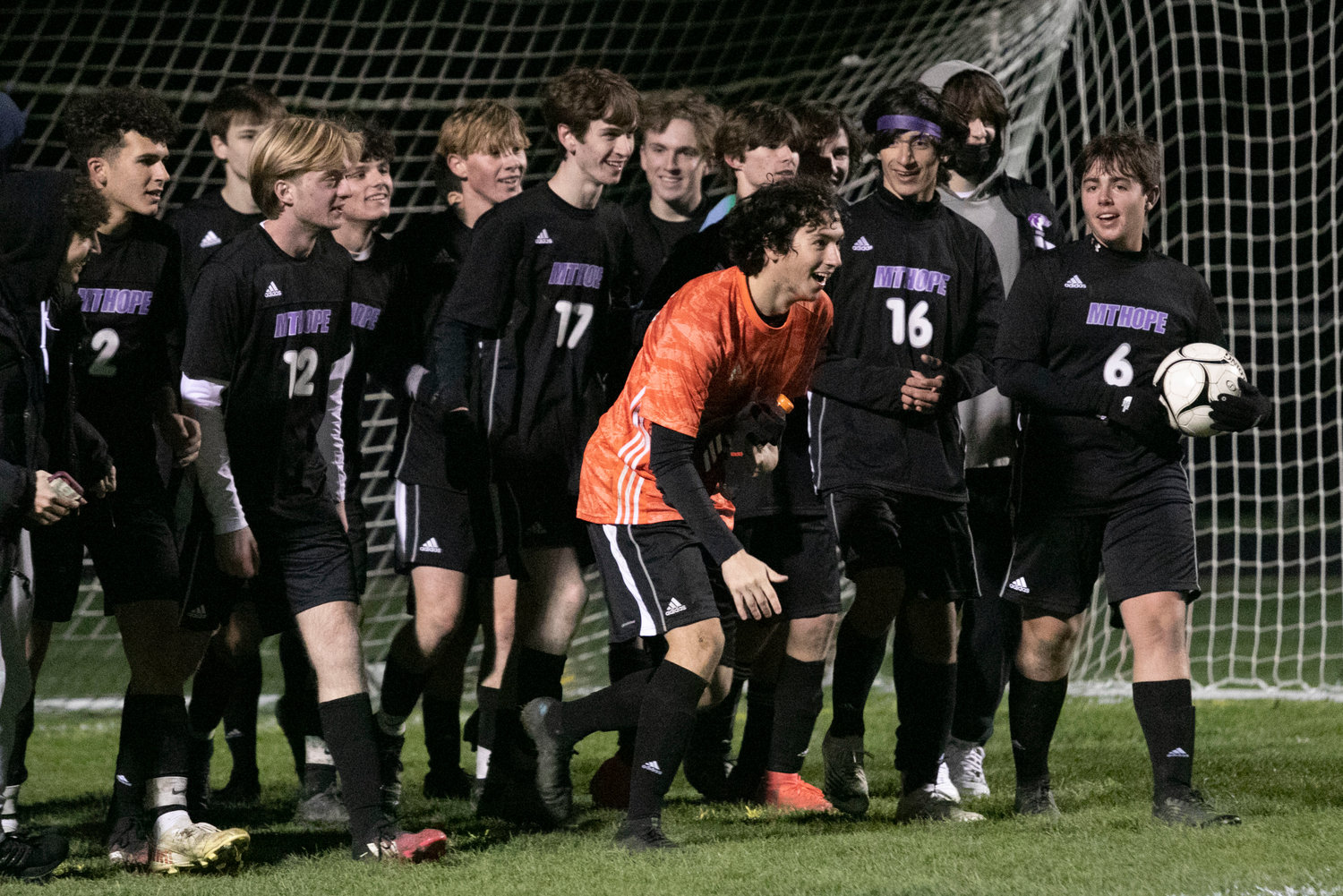 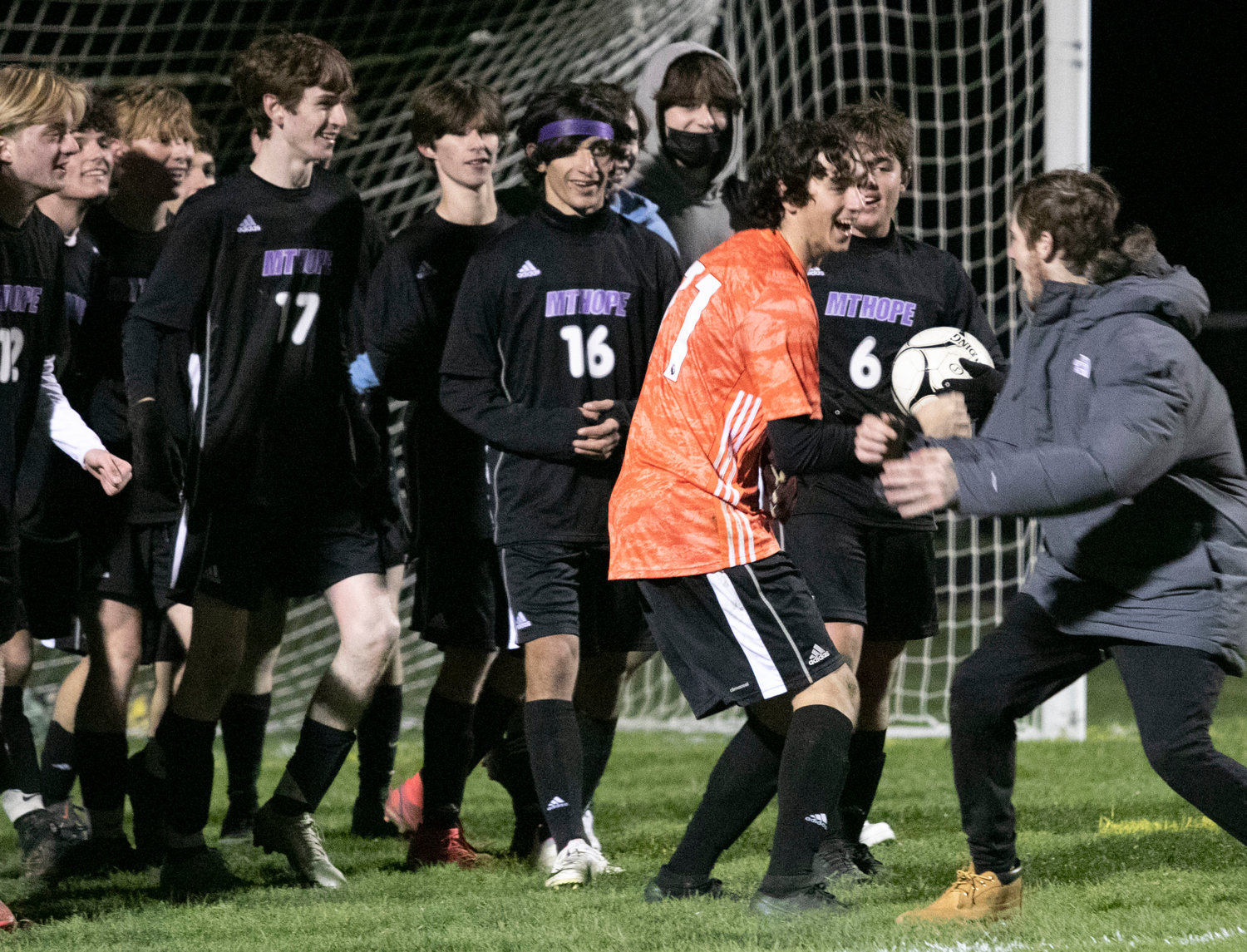 The Mt. Hope soccer team’s pressure offense and stout defense dominated Cranston West, 3-0, in the division two quarterfinals in front of a ruckus crowd at Roger Dietz Field on Friday night. Center back Parker Camelo scored two goals for the Huskies and striker Noah Furtado scored one. The win boosts the team’s record to, 12-2-4, as they move on to face North Smithfield, 11-4-1, in the semifinals at home on Wednesday.

“When I saw that all of our lineup was back,” said head coach Alex Couto, “I kind of anticipated that this was how it was going to go. We haven’t had our lineup all year. It feels good to finally be healthy. We’ll be tough to beat at this point.”

The Huskies had been playing without a variety players all season long until Friday night. Senior midfielder and field general Nick Andreozzi, senior center back Jack McNally and junior defender Griffin Berardo all were back for the full strength Huskies and the team was firing on all cylinders. McNally paired with Parker Camelo at centerback played brilliantly on defense in front of senior goalkeeper Matt Terceiro who made eight saves during the game. Terceiro made a legendary save in second half, off a Cranston West corner kick. The ball landed in the box and a Falcon offisive player let loose a blast destined for the right upper corner of the goal, from seven yards out. The tall athletic goalkeeper leapt, flicked out his left arm and punched the ball over the crossbar. The Huskies dog pound cheered and teammates hugged Terceiro after the unbelievable save.

“My jaw dropped when I saw that,” said Furtado who had a great veiw of the play from the field. "It was a crazy save.”

“We might have the best goalkeeper in the state,” said Coach Couto. “That was a world class save. A professional caliber type save. It looked like he had Matt beat. But he’s got quick, cat-like, reflexes. He slapped it over the bar. If I was a college coach, I’d be sitting at his doorstep, waiting. I’ve been fortunate to coach him here for three years. It’s just amazing.”

The Huskies pressure offensive kept the Falcons defense busy, as they peppered seventeen shots on Cranston West goalkeeper Elhadji Ndoye. Striker Noah Furtado led the attack, tenaciously terrorizing the Falcons defenders all game long with the help of midfielders Andreozzi , Chad Parente, Justin Mendes, Jesse Wilson, Kaden Silva and others. Furtado gave the Huskies a, 1-0, lead with 33 minutes remaining in the first half when midfielder Justin Mendes placed a perfect pass through the defenders and the super fast Furtado beat the defenders to the ball and sped in alone on Ndoye.

“I went in one on one with the keeper and kicked the ball into the bottom left corner,” said Furtado. “All of the conditioning at practice, the running, prepared us for moments like this. It just payed off during the game.”

“Noah is a nightmare,” added Coach Couto. “In a good way for me and in a bad way for our opponents. He’s going to apply pressure on the other team for 80 minutes. He plays at a hundred miles an hour and it’s a great thing to have. He started our momentum.”

Furtado nearly scored again in the second half. The striker collected a cross to the left side of the goal, dribbled up the goal line, slid and kicked the ball by the charging Ndoye. The ball caromed off the left post and out of bounds for a goal kick.

Senior center back Parker Camelo normally doesn’t find himself playing in the box, but the tall slender defender was set up there, in the right place at at the right time and capitalized on two scoring opportunities for the Huskies. “Parker started soccer three years ago,” said Coach Couto. “A baseball player turned soccer player. He comes out here and scores two goals. It’s what it takes for us to get to the next stage. I’m excited.”

Camelo’s first goal came with 33 minutes remaining in the second half. Senior midfielder Jayden Terra boomed a corner kick to the middle of the box. Both teams leapt up to meet it, but the ball dove into the grass. In the midst of the melee, the ball came to Camelo standing ten yards out and he blasted the ball by Ndoye to give Mt. Hope a, 2-0 lead.

“It is a team sport,” said Camelo. “I was just sitting there waiting and the ball came to me at the right time and I put it in the back of the net.”

Camelo again lined up inside the box when the Huskies were awarded a direct kick with 25 minutes left to play. Terra lofted the ball up over a wall and it fell into the box where Camelo was standing. The agile defender again booted the ball by Ndoye for his second goal of the game and a Huskies, 3-0 lead.

“I thought the defender was going to stop it,” said Camelo. “But It took a weird hop and I was there to tap it in.” Camelo has played many positions over the last few years including goalie and a stint on offense.

“I don’t really know what I’m doing to be honest,” he jested. “I just come to practice and have fun.”

Huskies move on to the semifinals

The Huskies will meet the Northmen in the semifinals. The two teams played to a, 1-1, tie during a game at Dietz Field on October 29th. Coach Couto is looking forward to playing North Smithfield again, coached by Christopher Swiczewicz, who he considers a friend.

“We tied all four playoff teams on our side of the bracket. Can we beat them all? Of course we can,” said Coach Couto. “This is a very scary place to play. We don’t lose here. That’s one thing that I have praised here for three years and it’s just going to continue. When I saw that we have home field advantage I said, this is what we need. It’s tough to come here in front of the Dog Pound and the rest of our fans who support us every day. I’m looking forward to the next stage. It’s the best time of the year.”