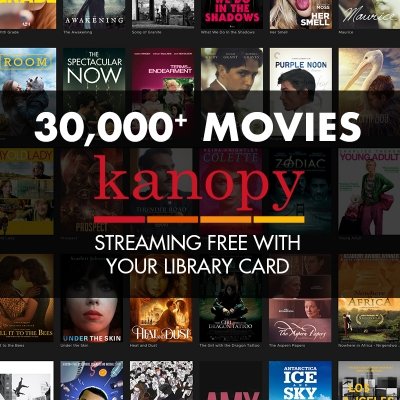 The Kanopy streaming service will be accessible through utilization of your library card, beginning this Friday.
Posted Friday, May 13, 2022 9:00 am
By Christy Nadalin

All streaming services aren’t made alike, and for some, whether due to cost or internet access, options are limited.

“As we are all aware, there are many premium streaming sites available to the public, in addition to the standard cable television offerings,” said Library Director Dawn Jenkin. “None is encyclopedic. Cumulatively, all are expensive. Content is often temporary, and finding a movie/documentary/television series can be extremely frustrating.”

In response, Rogers Free Library will be offering Kanopy, beginning this Friday, May 13. Kanopy is a video-streaming platform dedicated to thought-provoking films, established in 2008 to provide academic institutions with films that foster learning and conversation. In 2016, Kanopy expanded its services to public libraries; today, the service delivers a diverse collection of more than 30,000 films available to stream anytime and anywhere, from desktop to TV to tablet.

The service includes no fees and no commercials, and cardholders will be able to log in with library credentials.

“Our model is going to allow 10 downloads per patron, per month to start,” said Jenkin. Patrons will be allowed to access three separate Great Courses monthly, and for those offerings, as well as the Kids Collection, it’s only one download for a whole month of access.

Films offered include an impressive range of popular titles, in genres from drama, comedy, thriller, and action, to world and classic cinema, documentary, and family.

“One of the great things about Kanopy is that it includes performance rights for about 70 of the films,” said Jenkin. “This means that we can show them to groups (without paying licensing fees).”

In addition, Jenkin has announced a rededication to building the library’s substantial DVD collection, with the added service of lending DVD players, as part of their plan to expand technology hardware lending.

To access, grab your library card and visit www.Kanopy.com, on or after Friday, May 13.