Editorial: A community celebration for a writer who sees the good

Last Saturday night, in a jam-packed banquet room, a couple hundred people squeezed elbow to soup bowl for a three-hour celebration of community. The occasion was the Bristol Sports Club’s …

Editorial: A community celebration for a writer who sees the good 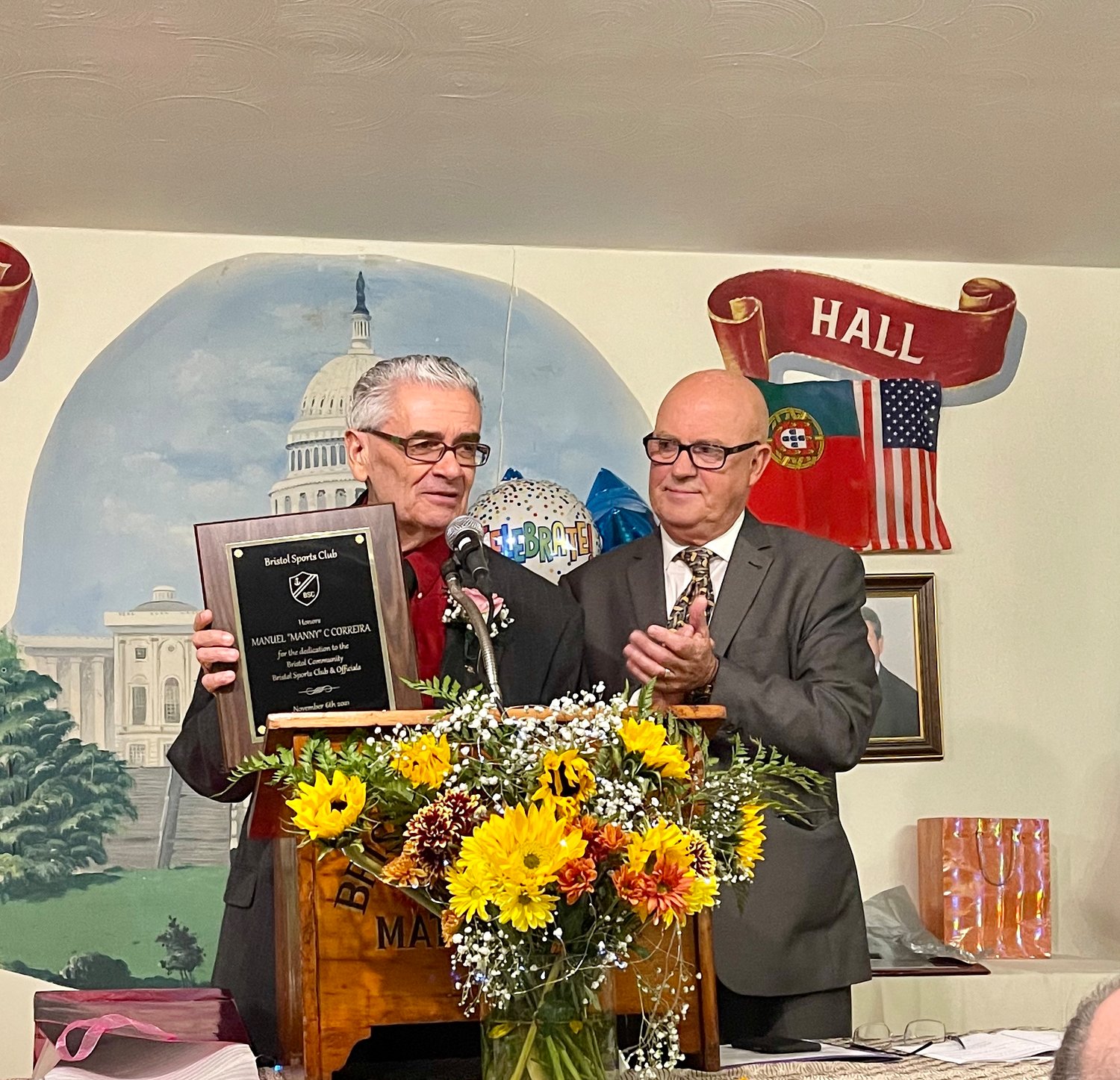 Manuel C. “Manny” Correira accepts the Man of the Year plaque from Bristol Sports President Elisio Castro, shortly before the unveiling of his portrait, which hangs proudly in the sports club’s banquet hall on Wood Street.
Posted Thursday, November 11, 2021 3:50 pm

Last Saturday night, in a jam-packed banquet room, a couple hundred people squeezed elbow to soup bowl for a three-hour celebration of community. The occasion was the Bristol Sports Club’s “Man of the Year” banquet to recognize Manuel C. Correira, known to most as “Manny.”

It was a decidedly “old school” event, for an old-school soul.

As if following a script from the 1960, ’70s or ’80s, the banquet included anyone and everyone, with town councilors, municipal leaders, police chief, fire chief, journalists, publishers, sports legends, spouses, children, family and friends all gathering to recognize a most remarkable man. There was not one speaker, there were dozens, as if the Sports Club’s banquet had become a banquet for the entire community. One after another, representing different groups and different populations impacted by this devoted writer, they stepped to the stage and told stories about Manny, about journalism, and about the good things in community.

The most dominant theme was Manny’s devotion to telling stories that made people smile, stories that highlighted the good in life. Every speaker talked about how Manny chronicled their lives, and their community’s life, in his thousands of stories.

For the few who are unfamiliar, Manny began writing for his hometown Bristol Phoenix when he was 16 years old. A passionate sports fan, he spent decades covering sports throughout all of the East Bay, for all the East Bay papers and the Providence Journal. He has also been a gifted features writer, telling stories about outstanding individuals and organizations, and their many accomplishments.

After more than 60 years in the business, he is still writing, still telling stories that make people smile. Many of his stories reflect back on the good, old days, revisiting the sports and community legends from his youth, often upon their sad passing. But he is contemporary as well, with so many people sending their great news tips to Manny because they know him and trust him.

We spend a lot of time following the stories that don’t make people smile, with our strong belief that, more than ever, we must be a watchdog for the community. However, Manny reminds us to also celebrate the good all around us, for there is plenty.

Manuel C. Correira has been inducted into three sports halls of fame, a journalism hall of fame and a writing hall of fame. But we think Saturday night’s celebration was a little more special than all the others, because it combined all the great elements of Manny’s career into one night of recognition.

Editorial: Be thankful for …

Letter: Some of these ‘rising seas’ theories are all wet