For more than 85 years, the Cup Defenders Association Children’s Christmas Party has been a staple of the Bristol community. 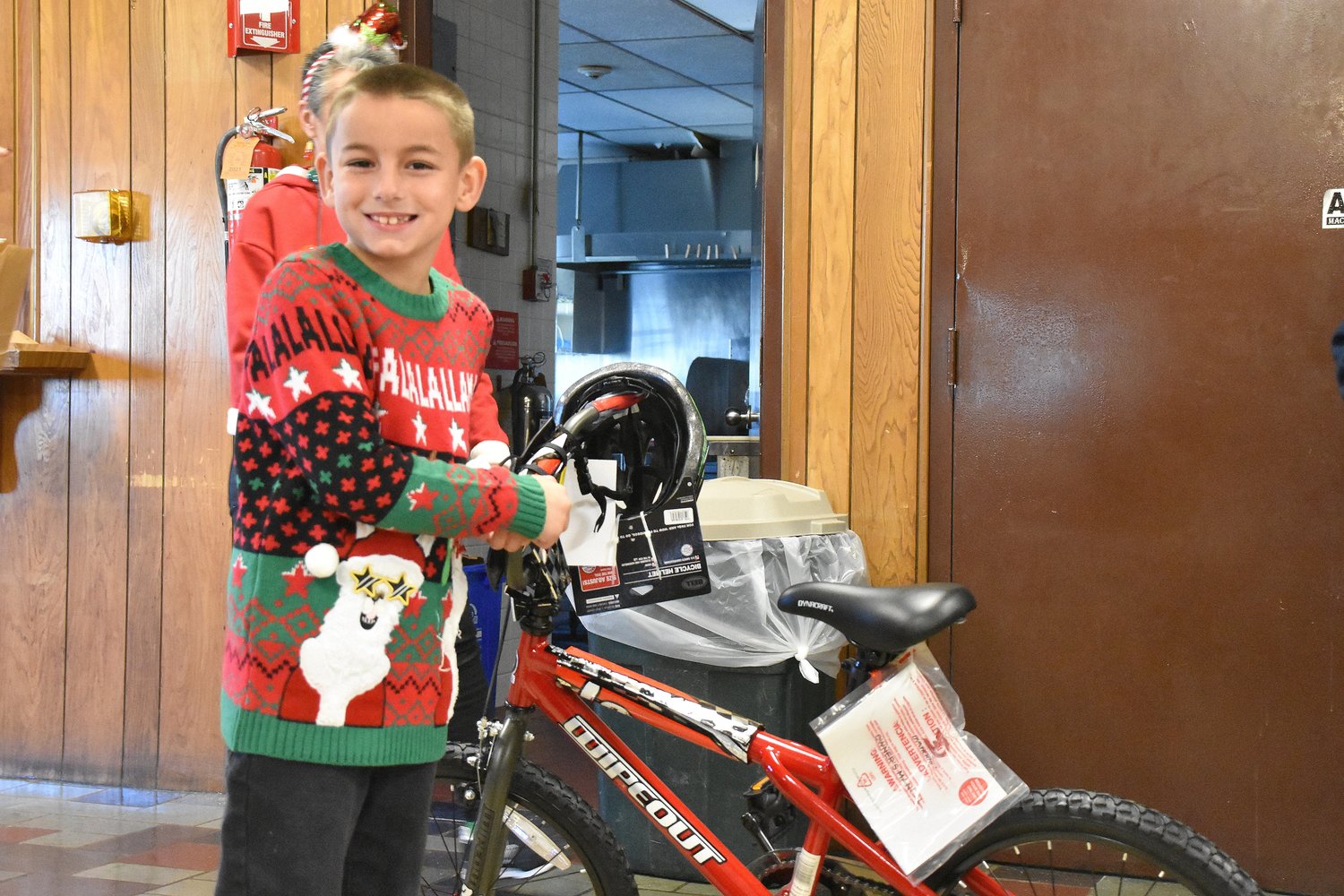 Cole Franco, age 6, and a student at Guiteras School, was one of the lucky winners during the Cup Defenders Association Children's Christmas Party last Sunday.
Manny Correira 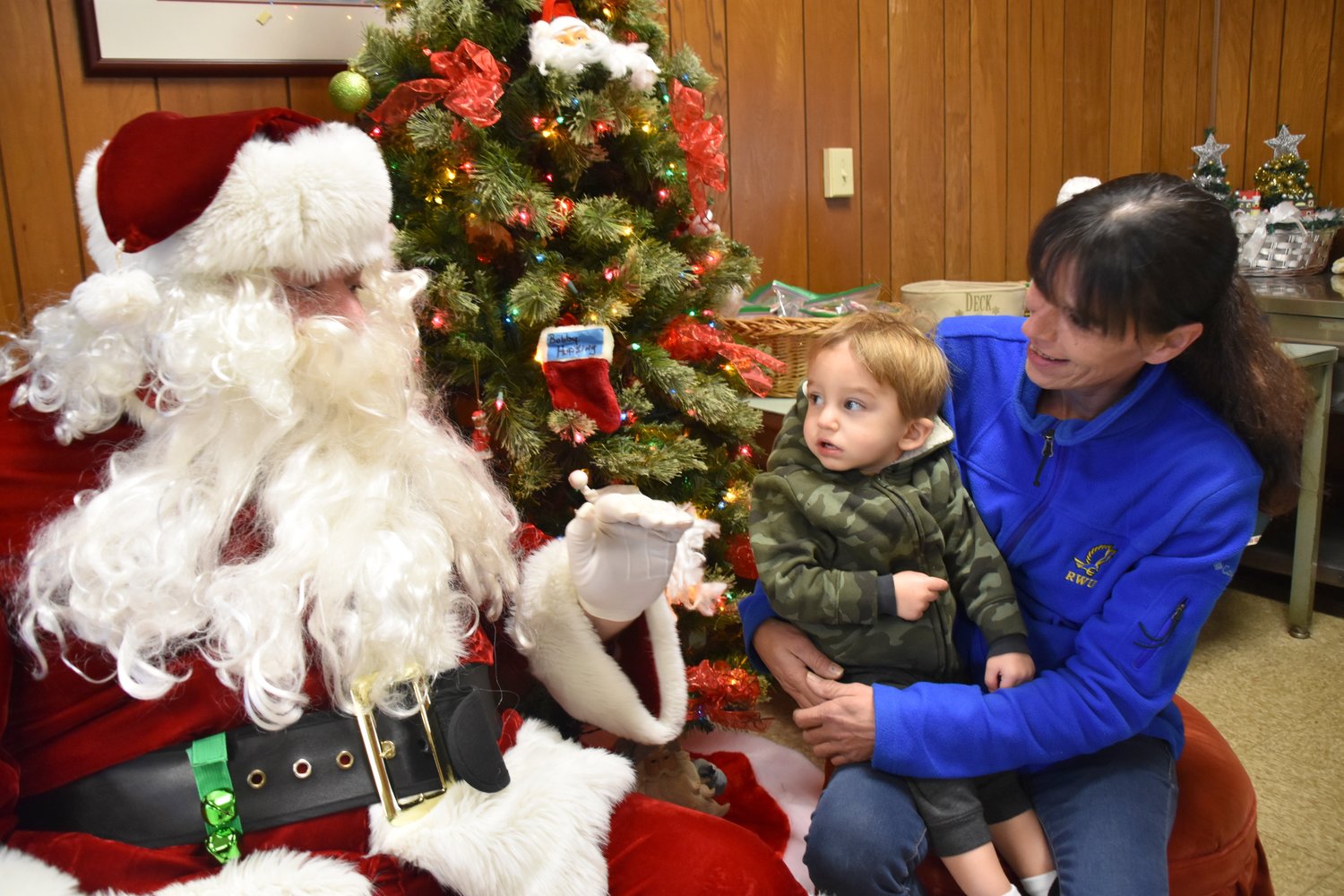 Kayden Cassady, 19 months old, seemed a bit perplexed with he sat down next to Santa (Steve Cavalieri). At right is Kayden's grandmother, Linda Viveiros.
Manny Correira
Previous Next
Posted Friday, December 17, 2021 9:00 am
My Manuel C. Correira

For more than 85 years, the Cup Defenders Association Children’s Christmas Party has been a staple of the Bristol community. Local kids have enjoyed the chance to meet with Santa and discuss their hopes of getting that special toy or gift for Christmas.

Last Sunday, in perfect late-fall weather conditions, a number of children gathered with their parents and grandparents outside in the Cup Defenders parking lot waiting for Santa (Cup Defenders President Steve Cavalieri) to arrive...via the Bristol Fire Department’s Engine 4. It was sight to warm anyone’s heart.

Thanks to the efforts of Bristol firefighters A.J. Medeiros, Ken Altice, Jared Castigliego, and Justin Ursini, Santa arrived safe and sound as children clapped vigorously and smiled from ear-to-ear once he stepped down from the fire truck.

“This event has always been so enjoyable for everyone concerned,” said Pamela J. Camara, who for the past 13 years, has helped organize and assist in making the day very special for all the children. “Because of the COVID pandemic last year, we couldn’t hold this Christmas party, so I know how much everyone was looking forward to having the event this year.”

Camara’s husband, David, is also a longtime member of the Cup Defenders and volunteer for this party. He’s even assumed the role of Santa in past years. Also volunteering their time were Kim Phelan, Anette Toms, Joe Franco, Joe Olsen, Brian Murphy, David Enos, and of course, Steve Cavalieri.

Once inside the Antonio DuPont Memorial Hall, youngsters were treated to some home-baked cupcakes, pizza (courtesy of Vienna Bakery), juice boxes, and bags of candy. Prizes included a wide range of toys, and bicycles, which were donated.

Founded in 1935, the Cup Defenders Assn. Children’s Christmas Party was designed strictly for club members’ children and grandchildren, but has since branched out into the neighboring community for all to enjoy. It’s believed to be the oldest, continuous party of its type in the East Bay area and throughout the State of Rhode Island.

“To think,” Camara continued, “coloring books and crayons were the first prizes that were awarded back when this club started many years ago. Now, we have so much more to offer, thanks to the generosity and support of the members of the Cup Defenders Association.”