It’s not uncommon for Bristol to zig when other communities zag. While most municipalities shut down and are content with backyard barbecues on the Fourth of July, Bristol shuts down half the … 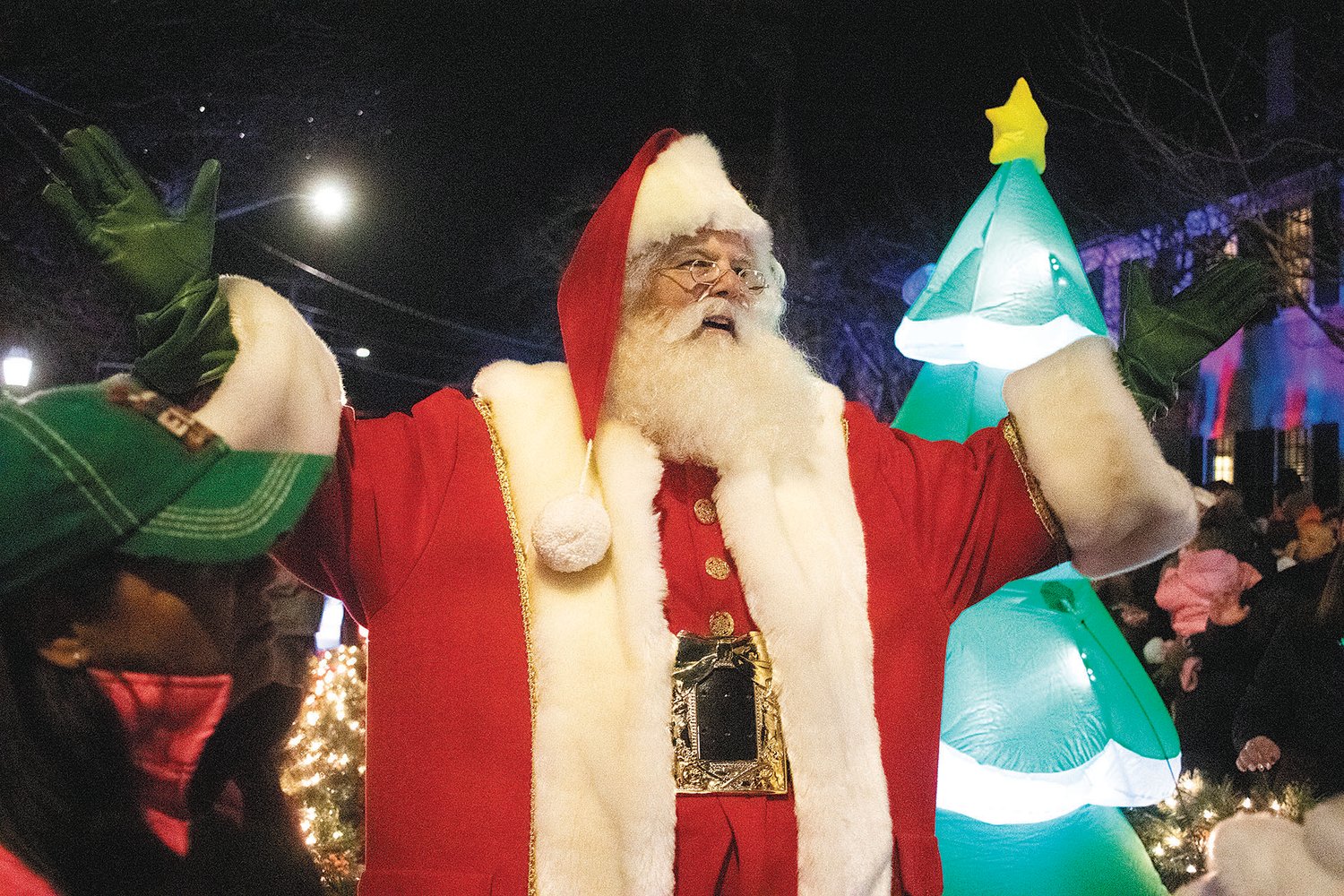 Santa Claus, played by Michael Rielly, arrives to greet the crowds at Bristol’s Grand Illumination Sunday night. Rielly led the town’s Christmas Festival in recent years, before handing the reins to new leadership this year. He and his James D. Rielly Foundation are organizing a new Santa House that is open to visitors throughout the month of December in downtown Bristol.
Richard W. Dionne Jr. 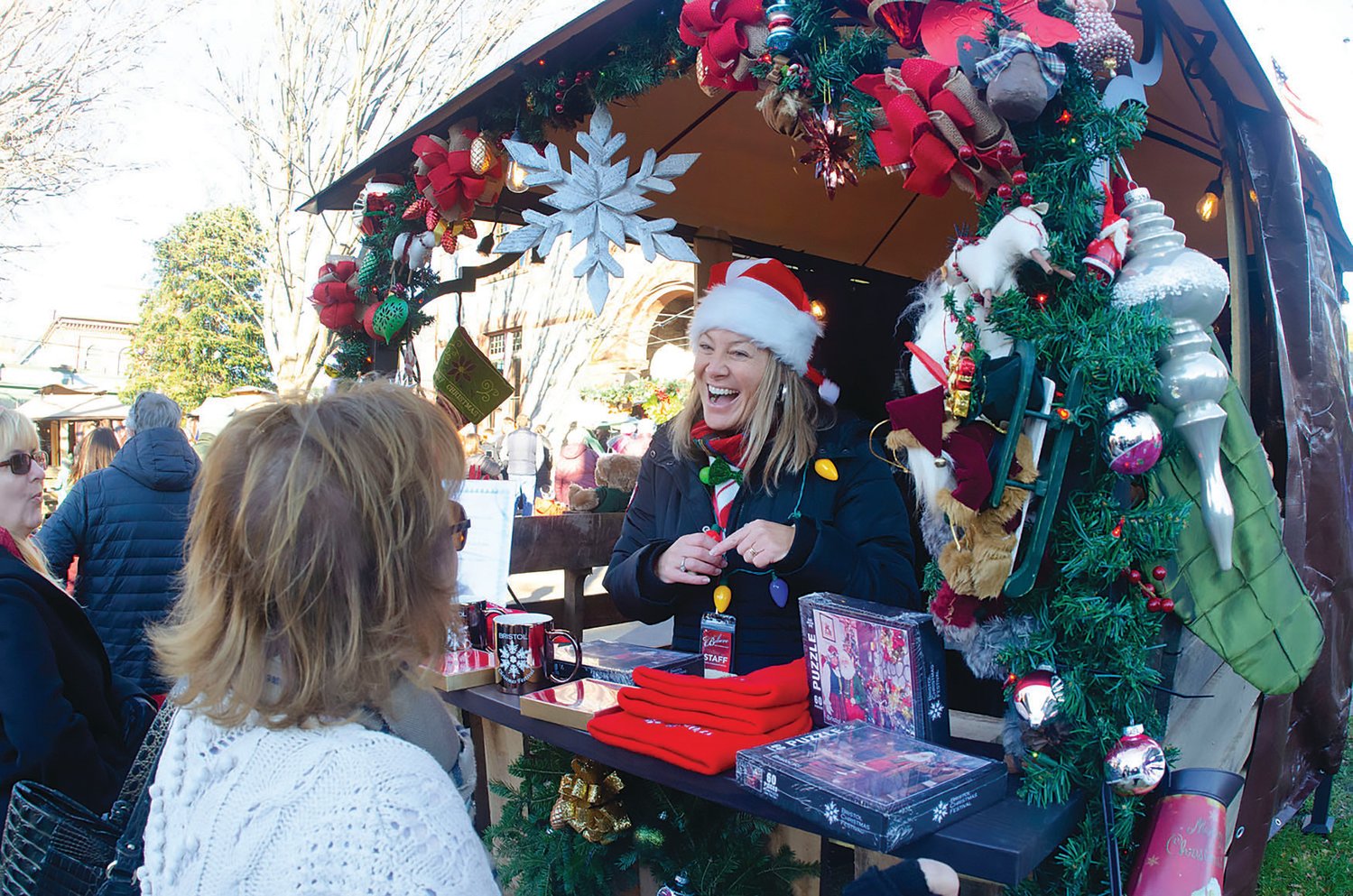 Kathleen Flaherty speaks to visitors at the Bristol Christmas Festival Committee booth during the 2021 event, the first of its kind. The Christmas Market, branded as a “European-style market – Through the eyes of a child,” returns for two days this week. Last year’s event attracted thousands of people, which is why the town will be closing roads in the downtown district for much of the weekend.
Previous Next
Posted Thursday, December 8, 2022 7:00 am

When people walk around, they’re looking for something to buy, a place to shop, a place to stop and have a meal. We’ve tried to design it so the foot traffic hits as much of the downtown as possible.”
David Scarpino
By Scott Pickering

It’s not uncommon for Bristol to zig when other communities zag. While most municipalities shut down and are content with backyard barbecues on the Fourth of July, Bristol shuts down half the town’s streets, welcomes tens of thousands of people and stages the nation’s oldest, continuous (and proudest) parade in America.

When other communities take months to analyze, research and discuss the smallest of decisions, Bristol sends a crew to the waterfront park and constructs a public ice skating rink on a random Friday.

Those same characteristics are on display this holiday season. While most communities hold some form of modest holiday celebration — a two-hour lighting ceremony on a Saturday night, or carolers and hot chocolate in front of City Hall — Bristol is building a month-long celebration of Christmas throughout its downtown district.

Officially known as the Bristol Christmas Festival, the celebration has been unfolding since mid-November. It kicked off with the “Christmas Snow Ball,” a swing-themed gala held in one of the town’s Catholic churches.

It continued with the opening of a new Santa House on private property at one of the town’s most distinctive downtown street corners. Two or three days a week, from Thanksgiving weekend through Christmas, families can visit the Santa house and pose for photos with Santa and Mrs. Claus.

It filled the downtown district with thousands of people for the most traditional of its many events, the annual Grand Illumination, which was moved to Sunday night because of Saturday’s rain.

And it reaches its zenith with a massive two-day festival this coming weekend, Dec. 10 and 11. The official Bristol Christmas Festival will last for 16 hours over the two days, with events, vendors, food trucks and performances taking place in multiple locations that will consume areas of Hope, Court, State and Thames streets.

Related: In Bristol, this season is all about Christmas

To support the program and provide safety for visitors and pedestrians, the Town of Bristol will be closing many of the roads throughout the downtown district to motor vehicles and parking throughout the weekend. Organizers hope this will be an improvement over last year’s Christmas Festival weekend, when thousands more people than were anticipated flooded into town to clog traffic and overwhelm the space.

“While it made things nice and cozy last year, there were too many people in too little space,” said David Scarpino, chairman of the Bristol Christmas Festival Committee, an official town committee whose members are appointed by the Bristol Town Council. They estimate that last year’s festival attracted 7,000 people, with most congregating at the small footprint beside the town’s Burnside Building.

“When we did our planning back in January, we decided we need to spread this out,” Scarpino said. “We want people going into restaurants, into bars, into small mom ad pop shops, and they do that best when they’re walking around … So this year, we did indeed spread it out.”

The vision for the actual festival this weekend is a European-style Christmas market, “through the eyes of a child,” with vendors, stages, cafés and more spread throughout the district. There will be an area for children to make their own wreaths at St. Michael’s Parish Hall, where there will also be a children’s crafts area. The Bristol Maritime Center on Thames Street will become an indoor marketplace with 26 different vendors.

A stage in front of the Burnside Building will hosts singers, dancers, wind ensembles and string quartets. The street in front of Town Hall will become the stage for dance studios and a ballet center.

Carolers in period costume will be roaming the streets. The public library will be serving hot chocolate. Linden Place Mansion will host a group of Victorian carolers. There will be multiple locations for family photo-ops, including the Santa House, which will be open all weekend.

“We think that by spreading it out, we’re mitigating some of the intense crowds in a single location,” Scarpino said. “The hub is the Burnside Building, and the spokes are the Maritime Center, the Santa House, the old Dunkin’ Donuts storefront [at the corner of Hope and State streets, where visitors can purchase Christmas souvenirs].”

Unity Park, located a couple blocks from the festivities, is joining in with the program, and there will be shuttles bringing visitors between the two areas.

The ceremony has grown faster than the town itself anticipated, and there are some growing pains. When the town administrator, police and fire departments took inventory on the scale of the plan, they decided the best choice is to close many of the downtown streets and re-route vehicle traffic.

“It’s true that they’re growing very quickly, and their primary location isn’t the most ideal,” said Bristol Town Administrator Steven Contente. “It’s one thing if it’s for an hour or two one evening, but this is two days on a state road.”

Contente is supportive of the festival and the potential for it to bring people and commerce downtown, but he and others have to keep things safe.

“They planned all this, but then the town departments had to catch up to their enthusiasm,” he said. “The fire chief has concerns. The police have concerns. The administration has concerns. There’s a price tag for all of this, and I don’t think they were thinking of this.We’re going to accommodate them, but we didn’t budget for this.”

Contente has told the committee that support services, namely police and fire details, will cost nearly $6,000 for the weekend. He expects to allocate $2,500 from a different town tourism account, but he notified the Christmas Festival Committee that they will need to pay the remainder of the bill.

That’s not something Scarpino and company had anticipated, but he said they support anything to mitigate risk and improve safety, and they will deal with the unexpected bill. “Our commitment is to have this festival, and we have to figure out how to handle the financing,” Scarpino said. “We’re all volunteers, and all of the money we raise comes from sponsorships, merchandise sales, and vendor fees.”

The committee is likely to ask the Town of Bristol to officially include Christmas Festival funding in its next budget. Scarpino said that if this had been determined earlier, he would have tried working with town leaders to include that $6,000 in the town’s budget plan.

Thought the festival will lead to road and parking closures, as well as general congestion downtown, organizers believe everyone will benefit from the ‘rising tide’ nature of the affair.

“I think, bottom line, it’s always a good thing if it brings people downtown and gets them spending money in our small businesses,” said Brenda Santos, chairwoman of the Bristol Merchants Association.

Despite being The Grinch when it comes to police details, the town administrator is still a big advocate for the celebration. “Their heart is definitely in the right place. There are a lot of good things happening,” Contente said. “People are always looking for things to do outside. I believe the businesses all like it. It helps keep the downtown vibrant during the holiday season.”

Scarpino said he personally talks to business owners downtown to get their feedback, and they’ve designed the festival to benefit everyone.

“When people walk around, they’re looking for something to buy, a place to shop, a place to stop and have a meal. We’ve tried to design it so the foot traffic hits as much of the downtown as possible,” he said.

Scarpino told an anecdote relayed by the owner of one of the downtown stores, Wink. “He said the money he made during our two-day festival carried him through what would have otherwise been a very tough winter,” Scarpino said.

In a later email, Scarpino wrote, “The mission of the Christmas Festival is to spread joy and happiness to the young and old alike, local and visitor alike.  But it also strives to support local businesses during a time of year when their economy slows down. We measure success by smiles on faces, kind comments on social media, and a sincere, job well done from a mom-and-pop business.”

To learn more about this weekend’s festival and see the complete schedule of events, visit: christmasbristolri.com

Note: Though activities between the Santa House and Bristol Christmas Festival are closely coordinated and leadership of the two groups is closely intertwined, they are led by separate organizations. The town-appointed Bristol Christmas Festival Committee is organizing the majority of Christmas and holiday events downtown. The James D. Rielly Foundation is overseeing and managing the Santa House at the corner of Thames and State streets.