The Bristol Town Council voted in favor of rehabilitating the Walley School into a community resource center with opportunities for recreation. 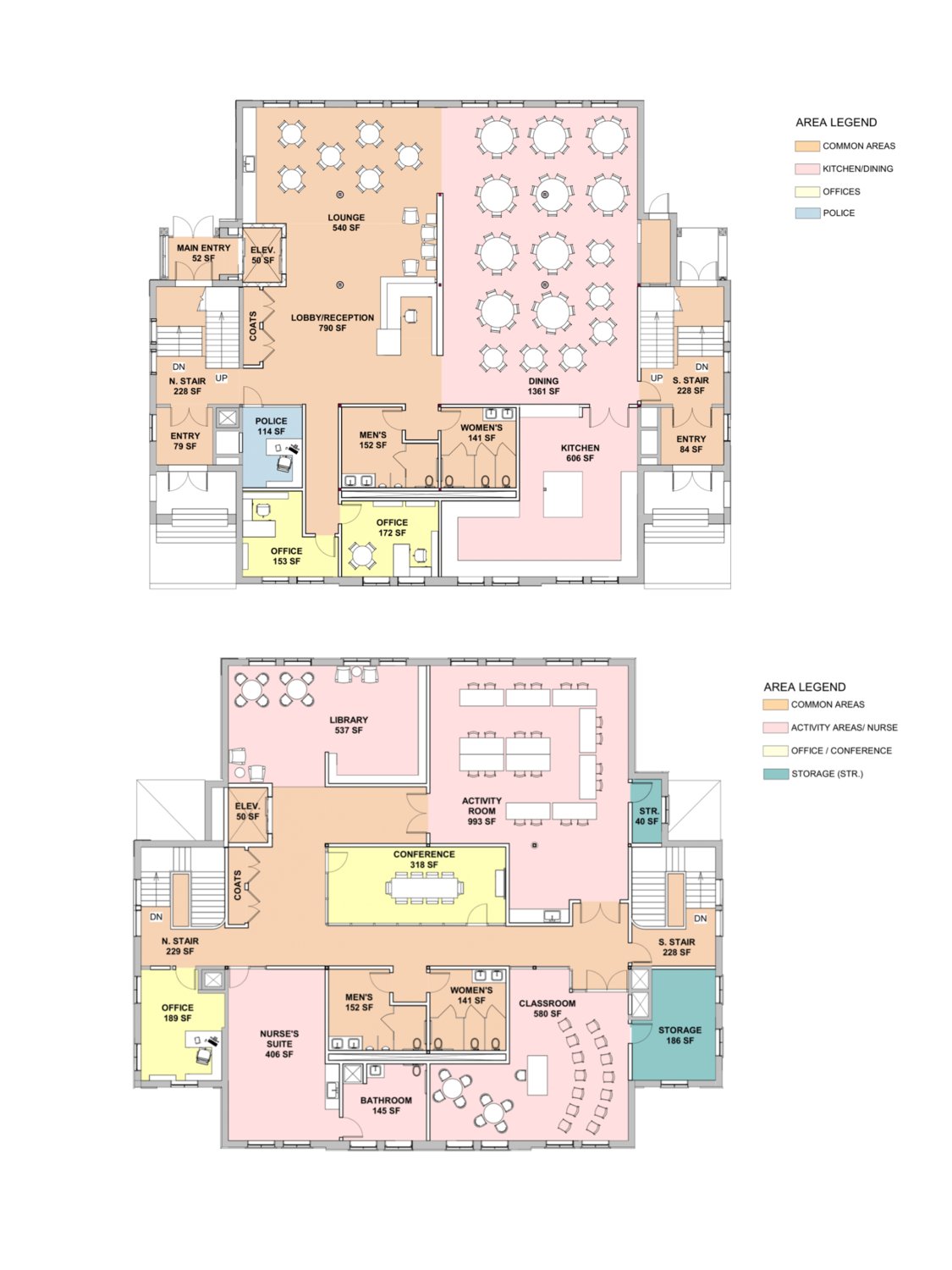 Floor plans showing the first floor (top image), and second floor (bottom image) show the variety of rooms outlined in the Town’s plans for the redesigned and refurbished Walley School, which would provide space for a wide variety of community activities. 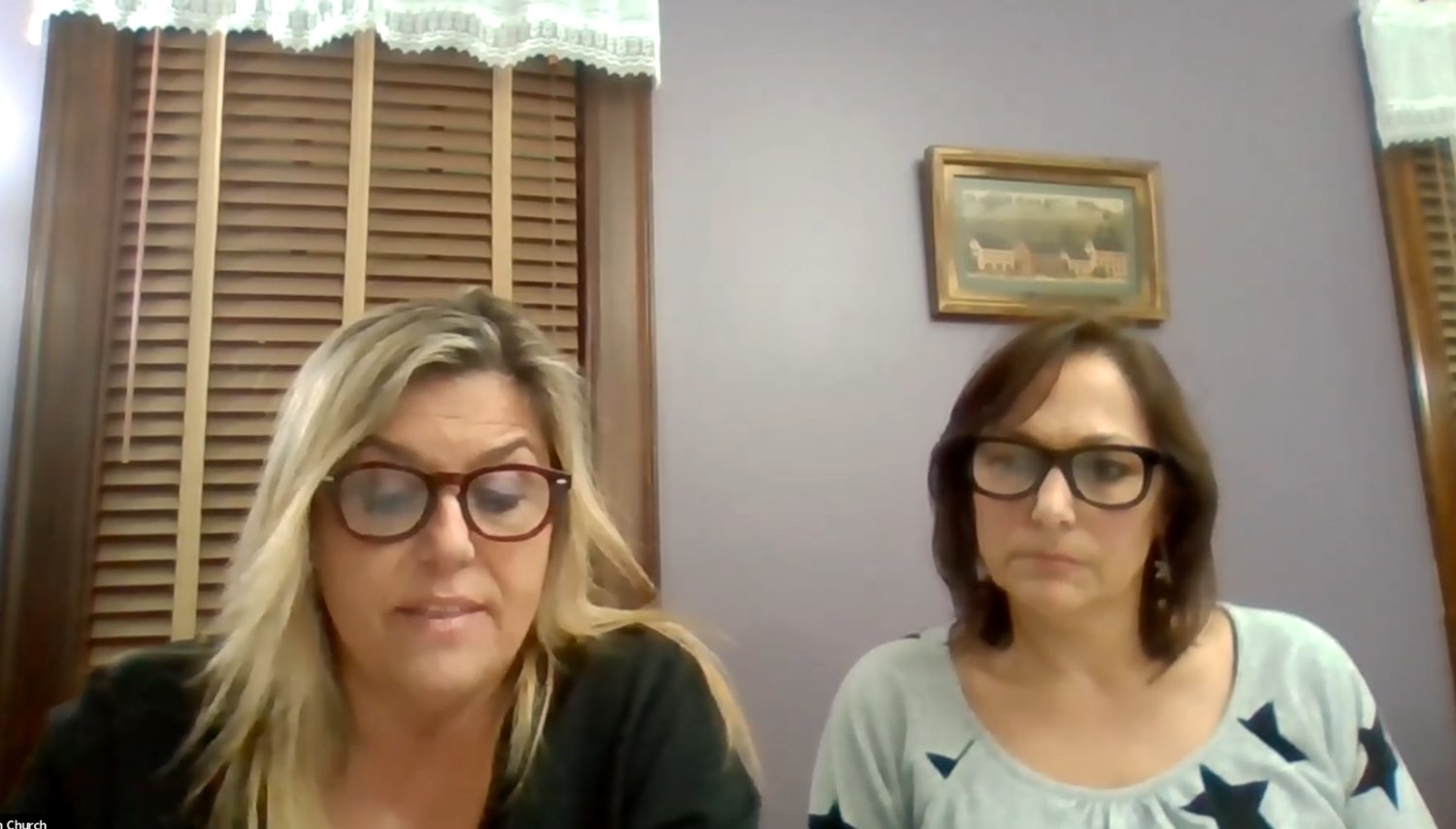 Benjamin Church Senior Center Board President Maria Doherty and Executive Director Maria Ursini weighed in via Zoom to speak about their concerns regarding the proposal. The Town has made assurances the Walley School is not intended to duplicate senior services already delivered at Benjamin Church.
Previous Next
Posted Thursday, January 27, 2022 10:47 am
By Christy Nadalin

After continuing the matter from the December meeting while seeking more information on the planned future use of the Walley School, the Town Council again took up the decision of what to do with defunct, deed-restricted building on the northwest corner of the Town Common.

Obligated to maintain it and unable to sell it, the Walley School, like the Byfield School on the southwest side of the common, needs both a maintenance plan and a purpose — both of which were presented to the Council at their December meeting, to a largely receptive Council. Revisiting the issue, Council Chairman Nathan Calouro opened the discussion, before turning the floor over to Economic Development Coordinator Chris Vitale, noting, “I know we've covered a lot of this….so far the only unfortunate thing here is maybe its name.”

“I’ve heard that a few times, about calling it a senior Center, and I think we're going to hear some dialogue this evening about the duplication of efforts….I think the the name is conveying things that we want to do there maybe a little bit incorrectly.”

“The town has a need for dedicated space for its municipal senior service activities, and this project would help us address that need by converting the decommissioned Walley School into a Community Resource and Senior Center,” said Vitale, adding that the $3.8 million price tag includes roughly $2 million in fixed costs necessary to stabilize and update the building — the lion’s share of which will be coming from federal funds and other grants.

Vitale’s presentation included detailing the parking plan, one significant concern that arose at the last meeting, and showing where they anticipate adequate available parking in the lot on State Street, as well as spaces adjacent to the building.

“We believe that this current configuration, and the amount of spaces that are there around the facility, can accommodate the proposed use and what we see for programming in the facility,” said Vitale.

Vitale also shared preliminary plans that illustrate some ideas for how the space could be designed to accommodate existing town staff, including the Senior Services Coordinator, Social Services director, and office space for a community police officer.

Rec Department bursting at the seams
In 2021 the senior attendance at Bristol’s Quinta Gamelin recreation center was just over 11,000 class registrations — that's about 251 seniors per week that attend about 20 different programs.

“The town of Bristol also regularly receives program proposals from fitness instructors or residents who just have an interest in in providing an activity,” said Vitale. “This can also be a location where we can hold those special events like the Christmas dinner that we had back in December — this would be an appropriate venue for that.”

He also noted that Walley would make an excellent location for vaccination clinics and other human services.

“We see this as a facility that can allow our existing programming a space to grow, as we expect the population to grow over the next 10 years. Its location also opens up a lot of opportunities to partner on intergenerational programming.”

The Council weighs in
“We need to stabilize that building,” said Councilor Tim Sweeney. “Regardless, we need to do the right thing with that building and, believe me, I want to see the lights on. I’m just making sure that we have a feasibility study that involves the stakeholders and….we're getting all voices involved on it.”

“Rather than calling it a Senior Center, I’d like to see maybe adult services or just town services,” said Councilor Mary Parella. “There's a lot of interesting things that could be going on there. I think there's a lot of potential use for it.”

“We have to bite the bullet, because every time we put it off it's just costing us more and more as we delay,” she added, referring to the years of deferred maintenance.

“I know I’ve had some mixed feelings,” said Councilor Aaron Ley. “I feel like I’m starting to come around a little bit to maybe some of the uses to which this building can be put in terms of a community resource….Can you talk a little bit more about activities in that building that could appeal to folks that are outside of the senior population?”

Funding sources
While much of the urgency of this plan comes from the condition of the building itself — Councilor Texeira said his foot nearly went through the floor on their last walk-though — the unique convergence of a $250,000 Community Development Block Grant (CDBG) awarded for senior accessibility plus $1,000,000 in use-it-or-lose-it American Rescue Plan Act (ARPA) money for HVAC and audiovisual upgrades, means that local bonding will only have to pick up $1.8 million (less after considering potentially $750,000 for the sale of the Oliver School).

According to Calouro, the total liability for a taxpayer with a home with an assessed value of $350,000 would be roughly $15.

Recreation the focus, not a duplication of senior services
“We are a little bit short on floor space because the Quinta Gamelin Community Center has been a very successful healthy happy place where people exercise and socialize,” said Town Administrator Steven Contente. “Because our programming is so healthy and robust the other issue we have is during the summer camp, it's difficult to send our campers up there. So the need right now is for a low impact space and that's where the Walley School really fits the bill.”

Contente stressed the Town has no intention of duplicating senior services with what is offered at the Bristol Senior Center, nor eliminating any of the responsibilities of that agency, housed at the Benjamin Church facility.

“This will not duplicate what's currently being done at the Benjamin Church Senior Center and hopefully we have reassured Benjamin Church of that. This is only to continue our services with our existing personnel, not add personnel….There have been some reservations that we're going to duplicate what's already successful at Benjamin church and that that is not the goal here, the goal is to continue what we find to be very successful, which is those low impact activities like Zumba and chair yoga.”

Benjamin Church Senior Center leadership weighs in
The Benjamin Church Senior Center Board President Maria Doherty and Executive Director Maria Ursini appeared via Zoom to share a prepared statement. Doherty began by thanking the Council for the opportunity to speak, then requested that the vote be postponed until a broader community-based discussion can take place, stating they were not privy to any revisions to the presented plan until late in the day prior to the meeting.

Though they suggested that the town's plan for the use of the Walley School as a community resource Center is in itself a good idea, they are concerned by its designation as a Senior Center.

“As the hub for senior services, we are the epitome of success,” said Doherty. “And we are respected and called upon to share our expertise and successes in our diverse programs from the many organizations that we network with.”

“It was stated that the only change would be this that some of the services from Asylum Road would be housed at the Walley School,” she said. “This creates an atmosphere of confusion, not only for us as an entity but certainly for the many seniors who will now be sent in yet another direction….It is difficult to support a program that we feel will take away from all the years of experience and knowledge accumulated here for the past 50 years.”

Council votes to rehabilitate Walley as a community resource center
“It heartens me that we're actually dealing directly with those concerns,” said Calouro, while thanking Doherty and Ursini for their statement. “A lot of those concerns that were expressed we addressed before and I heard their concern of how is it going to affect them…And I think I can respond to that one — it's going to affect them but it's going to affect them positively. I know that their (mission) is to take care of seniors….we couldn't agree with you more and if we can enhance those services while taking care of a building that is our responsibility, I am unabashedly supportive of this.”

Calouro also recognized their concern about whether seniors had been consulted on the plan and asserted that he and his colleagues have all spoken to many members of the public about the plan. “We don't do this in a vacuum,” he said.

A motion was made, and passed unanimously, to proceed with the improvements to the Walley School building.