Someone threw red paint on a downtown statue on Columbus Day, and police officers responded to a handful of complaints about loud music throughout the week of Oct. 11 to  17. 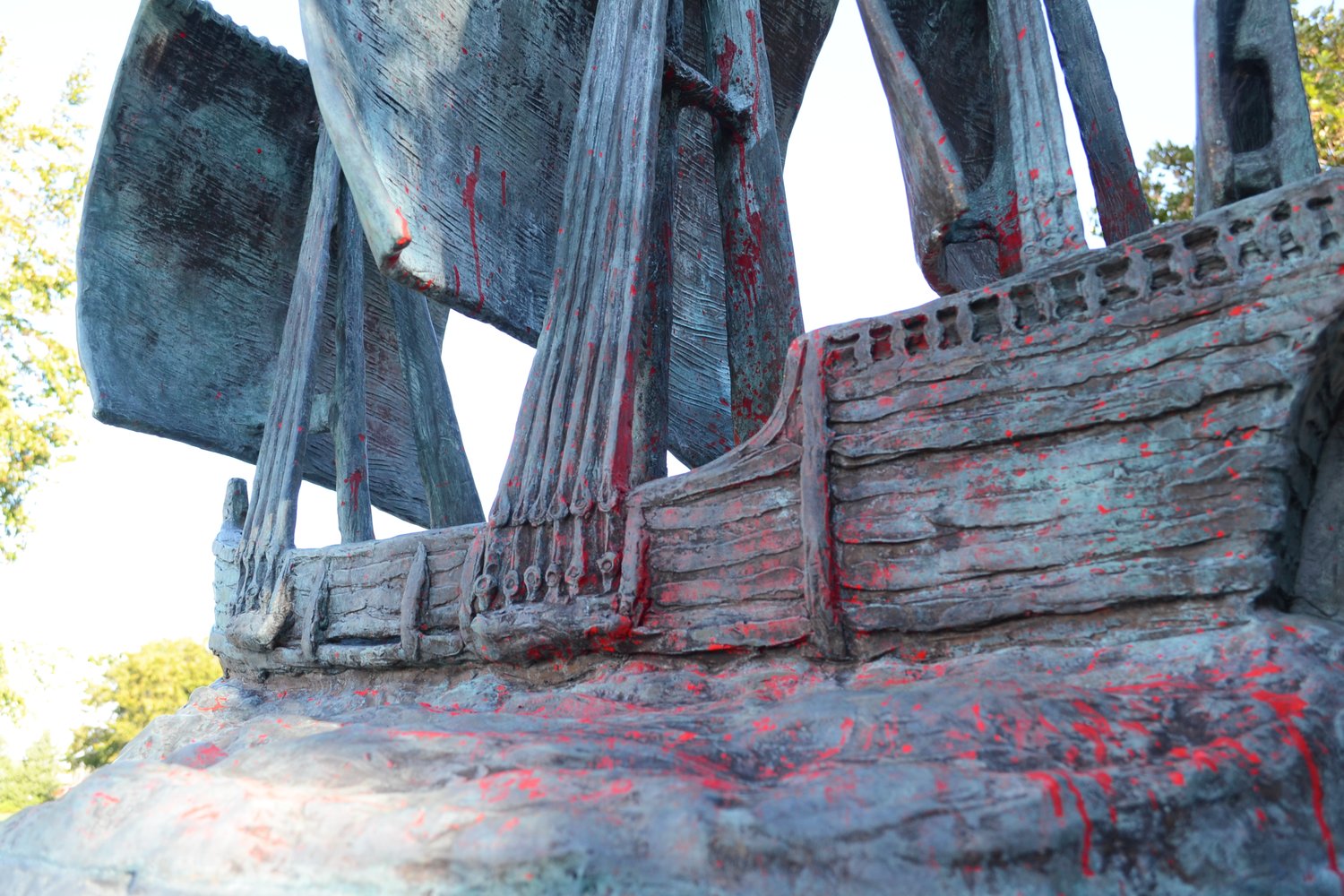 This statue in Independence Park on Thames Street was vandalized on Oct. 12, exactly 29 years since the date it was commissioned by the Heritage and Discovery Commission. Now mostly cleaned up, remnants of red paint can still be seen. The plaque on the statue reads, "In recognition of Bristol’s cultural diversity and commemoration of the Columbus Quincentennial”. 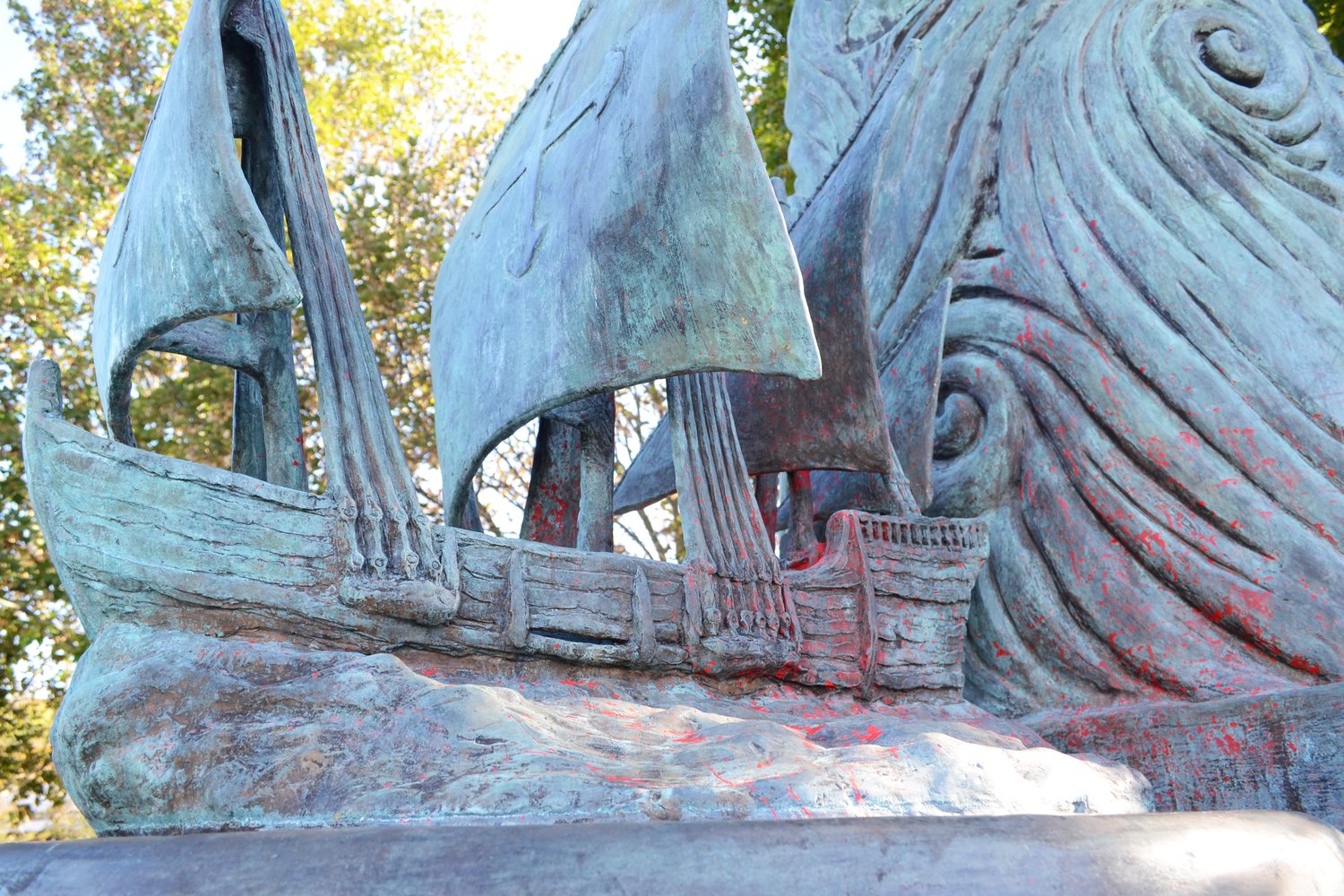 This statue in Independence Park on Thames Street was vandalized on Oct. 12, exactly 29 years since the date it was commissioned by the Heritage and Discovery Commission. Now mostly cleaned up, remnants of red paint can still be seen. The plaque on the statue reads, "In recognition of Bristol’s cultural diversity and commemoration of the Columbus Quincentennial”.
Previous Next
Posted Friday, October 22, 2021 12:00 pm

Someone threw red paint on a downtown statue on Columbus Day, and police officers responded to a handful of complaints about loud music throughout the week of Oct. 11 to  17.

Officers dispersed people from the area surrounding Coelho Park, off Jenny Lane, after a nearby resident called at 11:56 a.m. to report hearing screams coming from the woods. The caller believed someone was in distress.

A Smith Street resident called police after a group of juveniles opened the door to his residence and set off an alarm at 1 p.m. An officer caught up with the group a short time later, and they said they were attempting to sell iced tea door to door.

Police assisted at the scene of a motor vehicle accident on Metacom Avenue near the north entrance to Roger Williams University at 2:13 p.m. They called two tow trucks to the scene. Two Bristol rescues and a Warren rescue truck were called in to transport three different people to Charlton Memorial Hospital.

A caller notified police at 2:35 p.m. that a Columbus statue at Independence Park on Thames Street had been vandalized. While walking her dog, she noticed someone had thrown red paint on the statue.

A Robin Drive resident reported damage to their mailbox at 5:11 p.m.

At 7:19 p.m., a caller reported that two female juveniles might have fallen in the water off Narrows Point. It was triggered by one of the girls telling one of her parents that they “fell in the water,” and then her phone disconnected. It touched off a search that included two Bristol boats, along with boats from Warren, Swansea, Warwick and Tiverton. The girls were found on land, and rescue was called to evaluate one of them. She was later brought to Hasbro Children’s Hospital.

Evan D. Skrzypiec, 24, of Portsmouth, was arrested and charged with DUI – .15 or greater after being stopped on Hope Street at 12:56 a.m.

Officers responded to Summer Street after someone complained of noise at 3:56 a.m.

Erica L. Pacheco, 40, and Louis M. Pacheco, 41, both of 6 Judy Drive, Bristol, were arrested on warrants. Each was charged with simple assault and disorderly conduct.

An officer was called to Anthony Avenue at 5:07 p.m. to intervene in a verbal disagreement involving college students, one of who had driven his Jeep onto a lawn.

An officer warned the driver of a black Ferrari with New York plates about speeding in the area of Hope Street and Poppasquash Road at 5:56 p.m.

Officers responded to a fight in progress in the area of Franklin and Hope streets at 6:25 p.m. Jose L. Tavares, 26, of East Providence, was taken into custody, brought to the station and charged with felony assault with a dangerous weapon, disorderly conduct and simple assault. He was arraigned at the station by a justice of the peace and released.

A Tina Court resident called police at 7:08 p.m. to report a woman was banging on their door.

At 9:29 p.m., police received a call about an unwanted male being inside a woman’s apartment. After responding to investigate the situation, they took Gianna Sawyer, 22, of 65 St. Elizabeth St., Apt. 3, Bristol, into custody. She was brought to the station on a Superior Court warrant and later taken to the Women’s Intake.

Someone reported dogs barking and people fighting in the area of Siegel Street at 1:15 a.m. Officers responded but found no evidence of a disturbance.

A caller complained about people talking loudly outside of Aidan’s Pub at 1:24 a.m. An officer responded and found the establishment closed with no one outside.

A caller from Traffic Signs & Safety on Ballou Boulevard reported vandalism to the property.

Police took a report of a past assault at the Club House on Tupelo Street.

A Franklin Street resident was notified that a neighbor complained of loud music from their apartment at 11:17 p.m.

A Hamlet Drive resident called police after seeing a man wearing dark clothes and a hoodie park on the street in front of her residence and then get out of the vehicle at 1:14 a.m. Officers checked the area but did not find the vehicle or the man.

Someone complained of loud noise on Bay View Avenue at 6:36 a.m.

At 8:05 a.m., an anonymous caller reported an offensive banner at a Wayland Road residence. An officer tried to make contact with the residents but no one was home at the time.

At 8:37 p.m., a caller reported seeing someone driving a dark blue Highlander while playing loud music and throwing beer bottles out the window.

An officer spoke to the owner of a barking dog on Leahy Drive at 10:29 p.m. The owner agreed to bring the dog inside for the night.

A caller complained about noise from John Street at 11:21 p.m. A responding officer found no DJ or music, just people outside on a back deck.

Officers responded to the Bristol Harbor Inn at 2:32 a.m. after a guest reported someone might have been hurt. It turned out the man was sleep walking and he was escorted back to his room with his wife.

Officers were called to the Town Common for a reported fight involving two males at 12:22 p.m. Both men had left before officers arrived. An officer caught up with one of them on Franklin Street, and he said they had gone their separate ways.

Officers assisted at the scene of a fire on Sowams Drive at 1:42 p.m. A woman said she heard a pop after turning off her lawn mower in a detached garage, which subsequently caught fire.

Officers were called to a neighbor dispute on Wood Street at 5:05 p.m.

Officers responded to the VFW Post 237 on Hope Street after someone reported seeing a man wearing a white sweatshirt break into a vehicle and steal a wallet at 8:38 p.m.

Officers assisted on Vasta Lane, where an unwanted person was removed from the residence at 8:59 p.m.

A caller complained of loud music and people being on a Wood Street rooftop at 11:06 p.m. An officer found four people inside the residence and advised them of the complaint.

Someone complained of noise from a Highlander on Primrose Drive at 11:24 p.m. When an officer arrived, it was parked and there was no music playing.

An officer dispersed people from the area of Chestnut and Naomi streets at 11:29 p.m.

Someone notified police about a woman driving a dark-colored SUV who appeared to be yelling at someone in the area of Hope and Union streets at 12:55 a.m. An officer searched for the vehicle but did not find it.

An officer transported a woman who was along Metacom Avenue, north of Griswold Avenue, at 2:40 a.m.

An officer called rescue to the scene after being called to a domestic disturbance on Murphy Avenue at 9 p.m.

Someone complained of loud music on Ferry Road at 9:08 p.m.

An officer dispersed people from Paull Park on Sherry Avenue at 9:46 p.m.

Someone complained of loud music on White Tail Drive at 11:57 p.m. An officer checked the area but heard nothing.

A patrolman spoke to a resident at the corner of Magnolia and Franklin streets after a complaint about loud music at 1:48 a.m. They agreed to turn it down for the night.

A Viking Drive resident reported dirk bikes riding in the roadway at 6:28 p.m. They were gone when an officer arrived.