Canapitsit Customs of Bristol was recognized for crafting and streamlining the availability and application of advanced materials in UUVs, specifically waterproof, carbon fiber housings that contain critical electronic components for underwater robots. 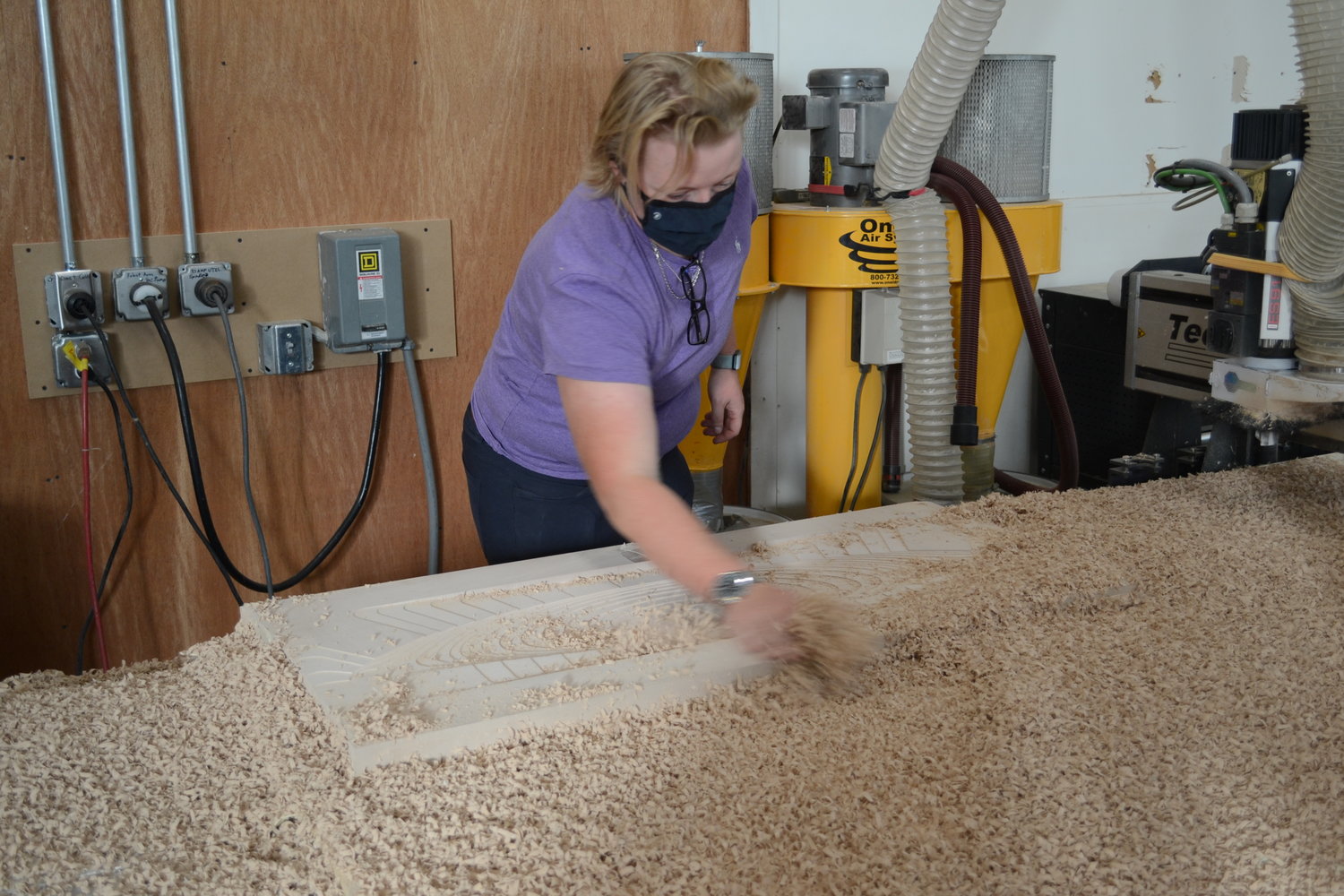 Darya Blout, founder and owner of Canapitsit Customs in Bristol, brushes shavings away from a mold as it is crafted by a CNC machine. The mold was ordered by a local kiteboarding manufacturer.
Ethan Hartley
Posted Thursday, December 2, 2021 11:40 am
By Ethan Hartley

Although flashy rockets shooting off into space tend to grab the most news attention, some of the most exciting, cutting edge work happening right now is occurring underneath the churning surface of the world’s oceans.

Manufacturers of these complex robots, for the most part, are not the large names you might expect, but are much more often small, independent companies without excessive budgets for things like research and development to advance their technology.

Enter Darya Blout, an entrepreneurial 28-year-old Cambridge native and 2016 graduate of URI’s ocean engineering program with a specialty in underwater acoustics and robotics.

After a short career working for Department of Defense contractors making submarine launchers, and a shorter stint building racing sailboats, Blout noticed a gap in the industry between innovative companies and their ability to optimize their creations with advanced materials, such as carbon fiber and composites.

She ventured on her own, and started Canapitsit Customs in 2018 in a warehouse off Broadcommon Road in Bristol with an initial focus of conceptualizing, designing and crafting molds used to fabricate various parts for the local maritime industry.

“It feels vague almost — we just build stuff,” she said with a laugh when describing what her company, where she is the only full-time employee, does.

Streamlining advanced technology
After receiving a grant from the Portsmouth-based 401 Tech Bridge accelerator program in 2020, Blout most recently grabbed attention by being named one of 12 cohorts through the Blue Tech Accelerator, a collaborative effort of the Mass Challenge and 401 Tech Bridge organizations that strives to provide exposure and enhance the missions of startup companies involved in various “Blue Tech” industries — which can encompass everything from cybersecurity, artificial intelligence, composites manufacturing and work with UUVs, as applied through a maritime-industry lens.

Canapitsit Customs was recognized for crafting and streamlining the availability and application of advanced materials in UUVs, specifically waterproof, carbon fiber housings that contain critical electronic components for underwater robots, which to-date have not been widely commercialized or accessible to any but the largest of companies.

“There’s a lot of R&D involved when you start talking about carbon fiber parts, and that’s kind of out of the scope for a lot of the smaller developers,” explained Blout. “The underwater pressure housings that we’re developing right now are going to be an off-the-shelf component that can be integrated into any sort of vehicle that needs that sort of thing — your larger vehicles that need to house the electronics for the brains that make the vehicles go…You put it in this housing and then you can plop it into the ocean.”

Using carbon fiber has multiple advantages over traditional materials used for these applications, primarily titanium, including a 25-30 percent weight reduction while maintaining the same level of resiliency. Carbon fiber can also be crafted into any size and type of part using pre-fabricated molds, making its applications essentially limitlessly customizable.

Driving tech forward
Blout is enthusiastic about the possibilities for continuing advancement in the field as more smaller developers of UUVs are empowered to utilize these advanced materials.

“I would say universally in any sort of technology-driven field, people don’t really think of carbon fibers and fiberglasses as materials for their vehicles or drones or whatever they’re using because it seems too hard. People don’t know enough about them,” she said. “I think making them more accessible, especially for smaller companies who don’t have the R&D capabilities, that’s just going to help in driving tech forward. Because these materials exist and are lightweight and they don’t corrode.”

In addition to new applications, these types of housings are designed to be retro-fit within existing technology, enabling them to become a “direct replacement to these titanium housings that are much more widely used,” Blout said.

Blout said that she is looking forward to applications for the increased use of composites and carbon fiber materials in the maritime industry, such as weather monitoring buoys.
“The thing I’m really interested in is finding other uses for this tech, because underwater vehicles are cool and cutting edge and there’s a lot of it in this area, but there are definitely other ways to be using these housings,” she said.

Blout is a bit of an anomaly in her field as a 28-year-old female. She figures she is the youngest of the Blue Tech Accelerator cohorts, and continues to be one of the few woman in the composites engineering field. Through she doesn’t linger on that fact, she admits it is “interesting.”

As of now, Blout contracts some of her work out to other manufacturers, but she is the only full-time employee — if you don’t count her loyal Labrador, Remy, that is.

“I always joke that the first person I’m going to hire is going to be more of an office manager type, because that is the hardest part for me,” she said.