This weekend, the RWU women's rugby team will play for a chance to win the national D-II collegiate championship in Houston, Tex. 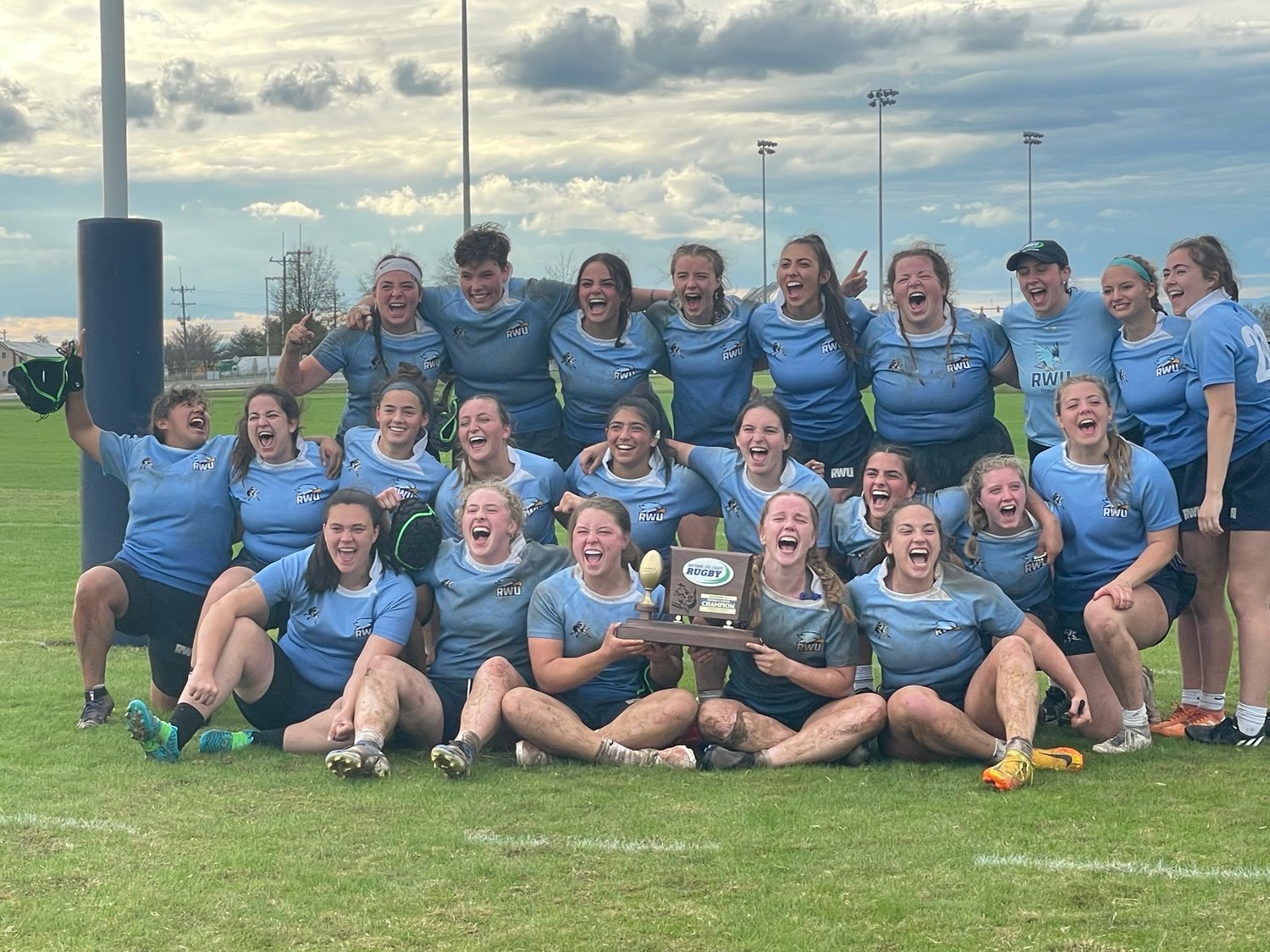 This photo of the RWU women’s rugby team was taken at the regional playoffs in Culpepper, VA, on Nov. 12. 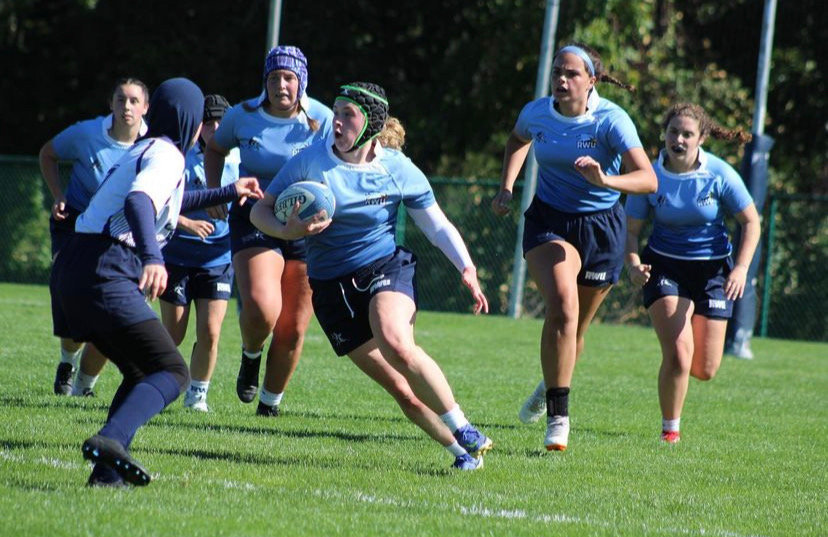 Senior Lizzy Dobson advances the ball during a recent match. 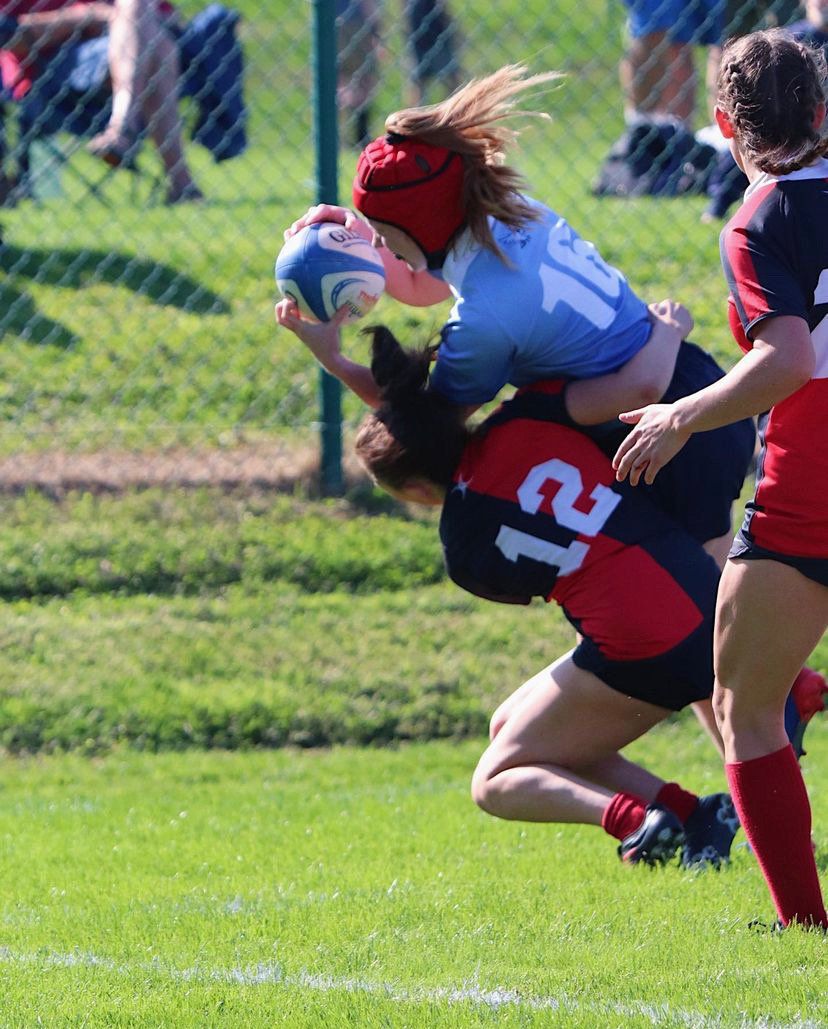 Senior Casey Dunbar (in blue) attempting to elude an opponent. 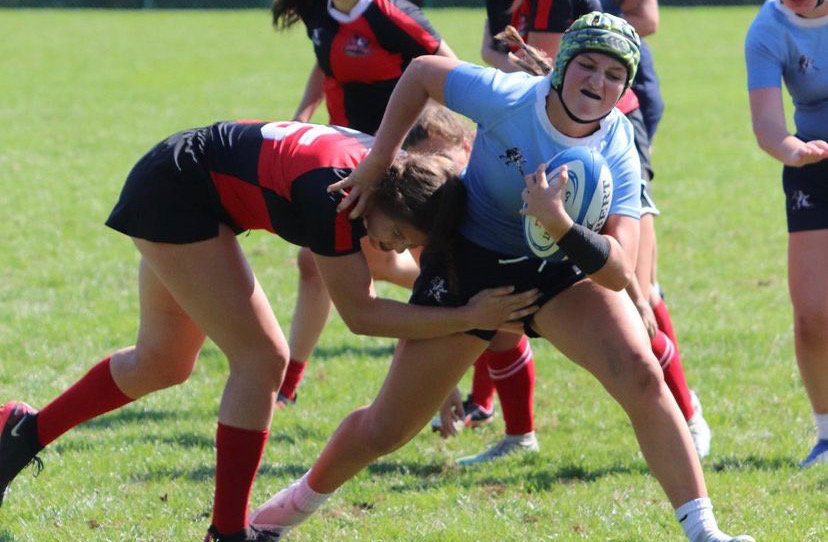 Junior Sarah Gray shakes off a hit.
Previous Next
Posted Thursday, December 1, 2022 9:00 am
By Christy Nadalin

When Collegiate Rugby’s top teams meet in Houston this weekend, the women of RWU will be looking to repeat the magic of last year, when they emerged as national champions for the first time.

The semifinals of the Division II National Collegiate Rugby competition will kick off on Saturday, Dec. 3 at 4 p.m. (CST) with RWU playing against the University of Wisconsin Eau Claire. If they get past that formidable opponent, they will play either Marquette or Wayne State on Sunday at noon (CST).

Though RWU won in D1 last year, they are playing in D2 this year following some restructuring of the divisions.

The team itself, including Coach Cait Mallahan is largely unchanged — they only lost two seniors last year.

Mallahan, a Bristol resident, is feeling good about her players’ chances. “We are definitely feeling the pressure after winning last spring,” she said. “But I’m confident in this team. They know what it takes to compete.”

Mallahan should know — two short years ago, she was a player herself.
Ironically, she wasn’t interested in Rugby as a high school student. “I saw my sister play for Bryant; I thought it looked insane,” she said. “But once I got to RWU, I found myself looking for a new sport.”

She ended up playing rugby all four years, and served as team captain for the last two. She graduated in 2021, and stayed at RWU to earn a Master’s degree in Special Education. She was offered the job as Women’s Rugby Coach, a job she clearly excelled at while simultaneously completing her graduate studies.

Mallahan continued on as coach this year, while enjoying her first year as a special education teacher at Fall River’s Durfee High School.

According to Mallahan, the transition from player to coach was pretty seamless. “I was clear when I began that I was coach, not a friend,” she said. “The team already respected me as a player and leader, so that continued.

“Then they saw the results, and that really sealed the deal.”

Her approach with her team was direct, and effective. “I gave them the choice — do you want to have fun, or win? So that’s what we based the season off of. They crave the competition, and that sets the tone.”

“They are super hungry for another win.”

As for Mallahan, who is as happy with the work culture and community at Durfee as she is at RWU, she’d like to hang here a bit and continue building on the success of a program and a sport that she never really meant to fall in love with.

“You work so hard building these relationships,” she said. “I like the culture at RWU and I like Bristol. This is a tough area to leave once you settle in.”