Preparing for an icy rescue in Barrington

The Barrington Fire Department has a message for people looking to ice skate in town: Stick with the man-made rink at Legion Way.

Preparing for an icy rescue in Barrington 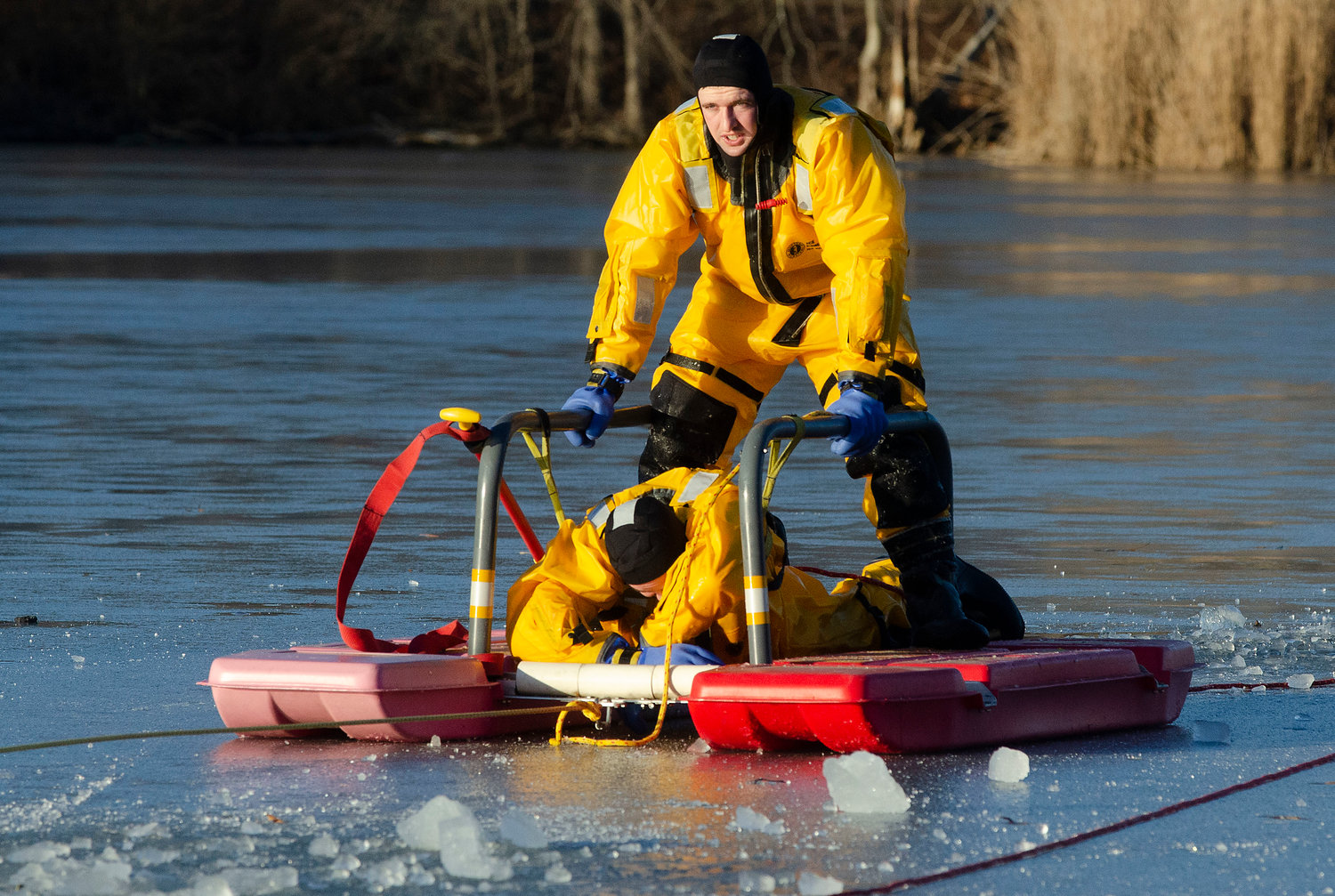 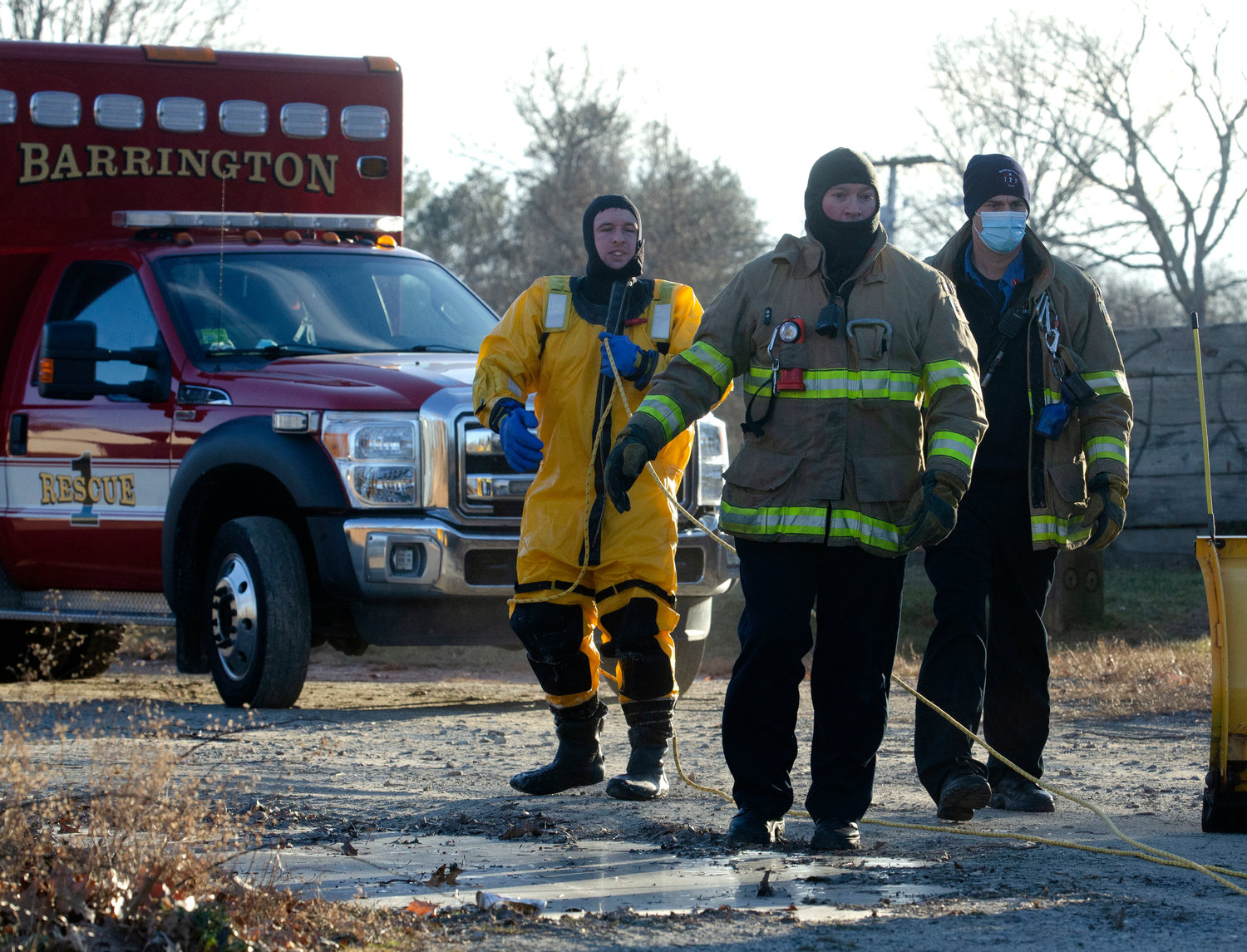 Barrington firefighter Pat Reihl (left), Lt. Matt Kane, and Stephen Destafano look on after pulling the Rescue Alive ice and water sled with firemen Brian Masse and Jared Pedro on it, back to shore.
Photo by Richard W. Dionne Jr. 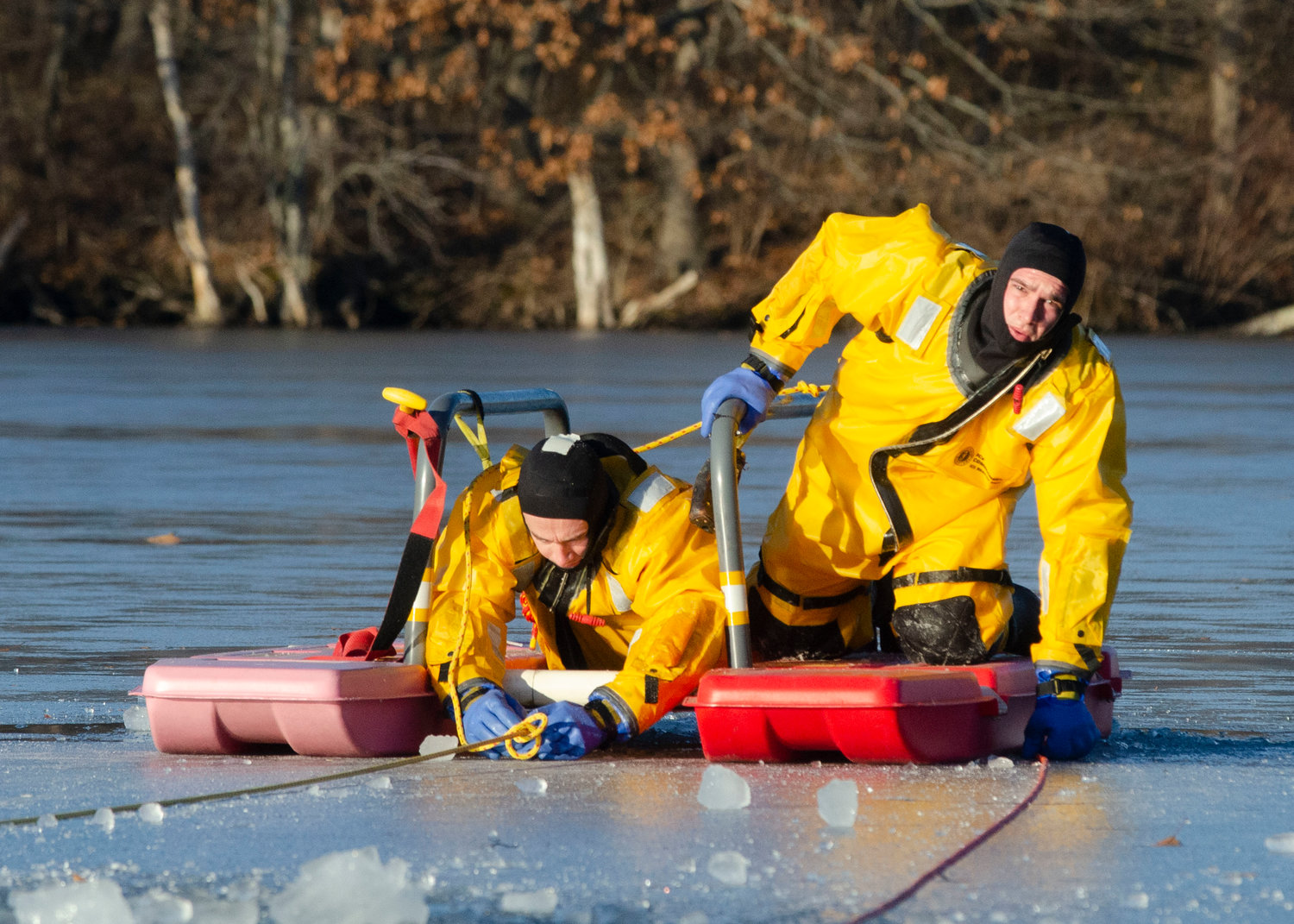 Probationary fireman Jared Pedro gives the signal to be pulled back to shore, once he loads firefighter Brian Masse safely onto the sled during an ice rescue training at Brickyard Pond on Friday afternoon.
Photo by Richard W. Dionne Jr. 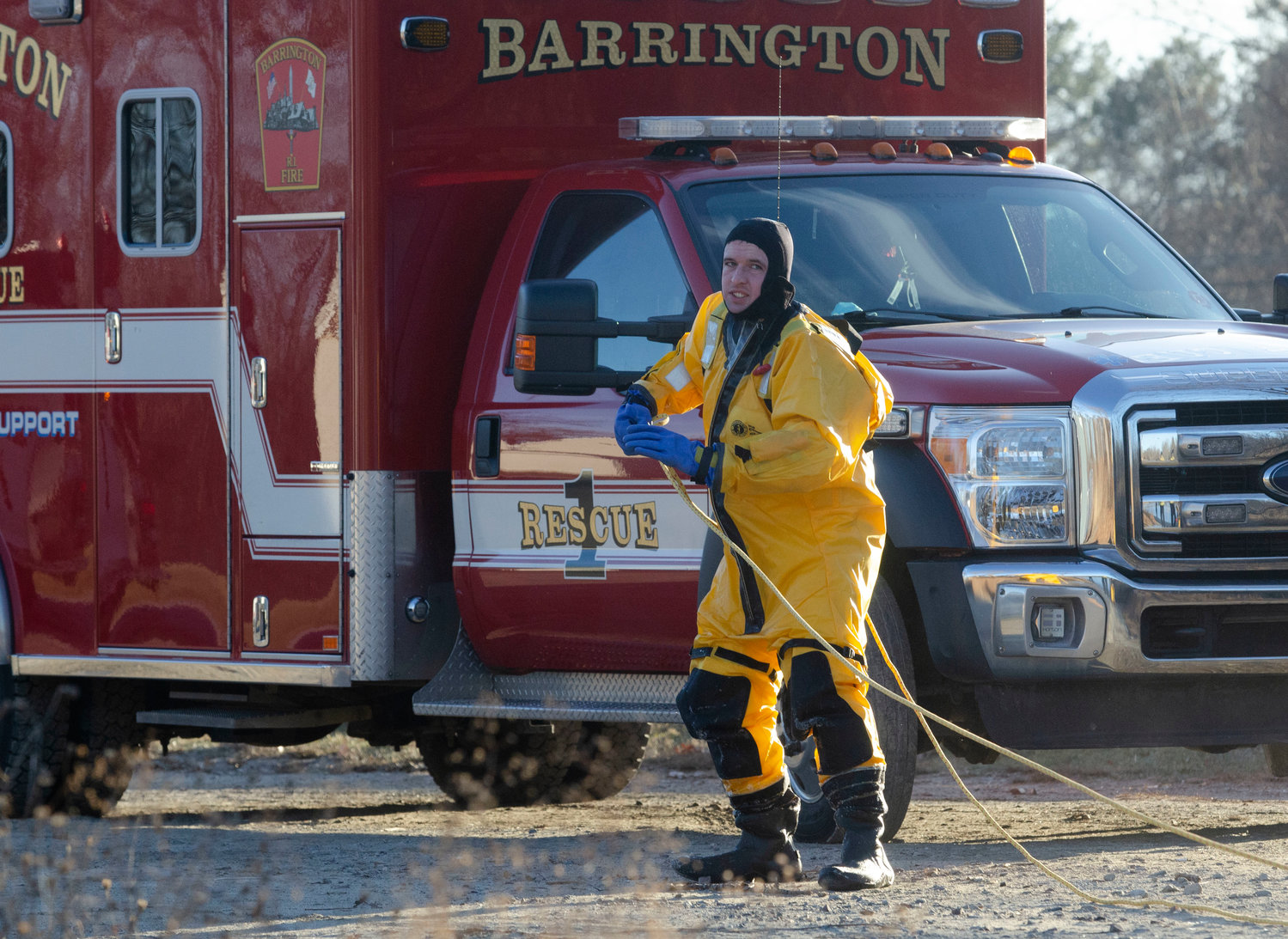 Barrington firefighter Pat Reihl pulls in the rescue sled with other firemen during an ice training exercise on Friday.
Photo by Richard W. Dionne Jr. 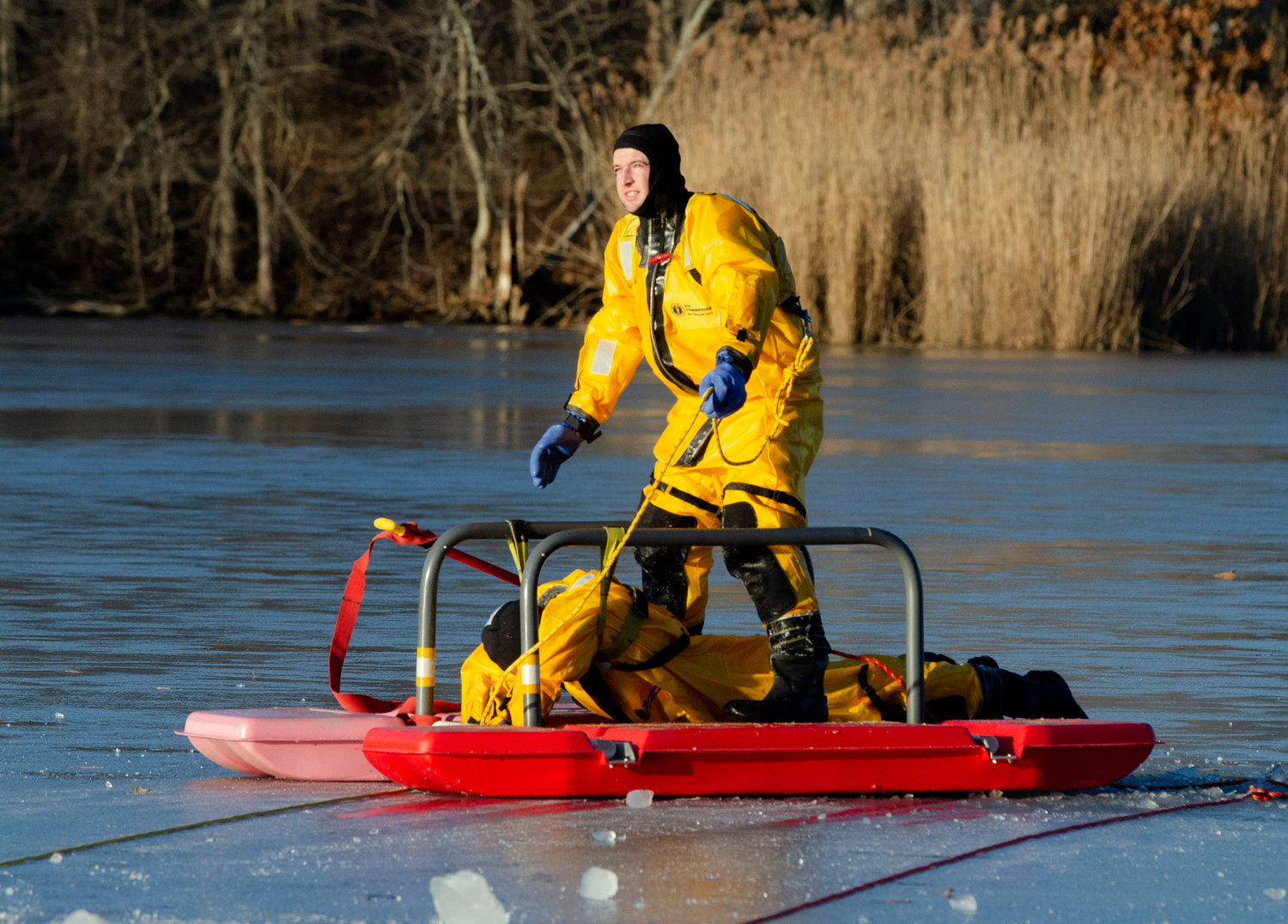 The Barrington Fire Department has a message for people looking to ice skate in town: Stick with the man-made rink at Legion Way.

Barrington Fire Department Captain Jason Fanion told the Barrington Times that neither the fire department nor the Rhode Island Department of Environmental Management monitor the lakes and ponds in town for safe-skating.

“The only ice deemed ‘Safe’ in town is the man-made rink located at Legion Way,” Capt. Fanion wrote in an email to the Times. “Other bodies of water in town are deceivingly deep, have underwater springs that cause temperature fluctuations resulting in thinner ice, or are a mix of salt and fresh water also resulting in unsafe ice.”

On occasion, the Barrington Fire Department is forced into a dangerous ice rescue situation. Sometimes it is to retrieve a pet or wild animal that has wandered out onto the ice, “because it's human nature to try and save a dog or help rescue a deer stranded on the ice, and then they too become a victim.”

Capt. Fanion said that if an animal or person needs to be rescued on the ice, people should call 911 and not attempt to venture onto the ice. Instead, the bystanders should keep their eyes on the victim or victims and pass along the exact location where they were last seen on the ice.

“A fall through any ice or immersion in frigid water is a true emergency,” wrote Capt. Fanion. “Folks think that if they fall through the ice they'll just pull themselves up and out of the hole that was just made by falling through. In rare cases, folks may be able to self-rescue. More often than not, someone will fall through the ice and then panic due to ‘cold water shock,’ or when they try to surface they find that they are actually not anywhere near where they fell through and are trapped below the ice surface and drown.”

Capt. Fanion wrote that research has shown that even healthy humans can experience sudden cardiac arrest or life-threatening cardiac dysrhythmia due to cold water shock.

“These are known as ‘cold shock response’ and the ‘diving response’. Both are the result of the body's nervous system's reaction to cold water,” he wrote.

Capt. Fanion said it is crucial for EMTs to be aware of how to properly treat rescue victims from cold water. He said two chapters in the RIDOH (RI Department of Health) Prehospital Care Protocols are dedicated to these types of situations.

In an effort to best prepare themselves for an ice rescue situation, members of the Barrington Fire Department regularly conduct ice rescue training. That was the case late last week, when the firefighters performed crucial training at Brickyard Pond.

Capt. Fanion wrote that the fire department has a dedicated ice rescue trailer, which houses more than 1,000 feet of life-safety rope, cold water immersion suits, rescue sleds and other equipment.

He offered a description of a typical ice drill used by the fire department. He wrote that a firefighter serves as the victim for the drill. Wearing an emersion suit, they walk out onto the ice until they fall through.

“A ‘rescuer,’ in the same level of protection, will then effect a rescue of the ‘victim,’” he wrote. “Once the firefighter has the victim secured to safety lines, the remaining personnel onshore will form single file and physically pull the rescuer, victim, and the rescue sled expeditiously back to shore for medical treatment. We then repeat the drills with different personnel so that everyone is fluent in different roles and rescue techniques.”