PORTSMOUTH — During an informational meeting before the Town Council Tuesday night, Mayflower Wind representatives were peppered with questions about the route of a proposed cable that … 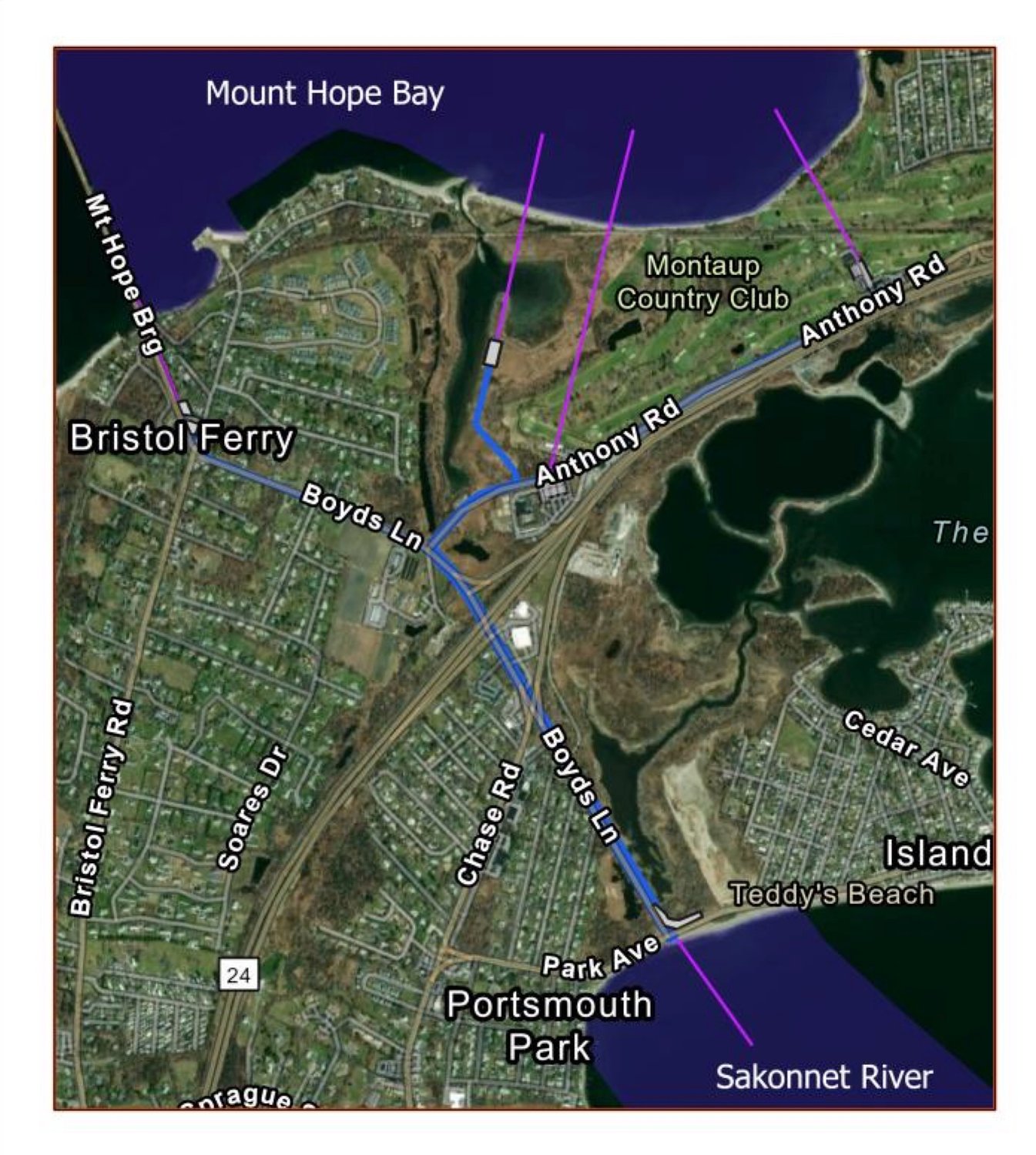 Illustration provided by Mayflower Wind shows how proposed cables would make landfall in Portsmouth at Island Park Beach, follow Boyds Lane underground to Anthony Road, and then take one of three as-yet-undetermined routes before transitioning back to offshore in Mt. Hope Bay. The cables would eventually make it to the regional transmission system at Brayton Point in Somerset.
Posted Thursday, August 11, 2022 11:11 am
By Jim McGaw

PORTSMOUTH — During an informational meeting before the Town Council Tuesday night, Mayflower Wind representatives were peppered with questions about the route of a proposed cable that would bring converted energy from offshore wind farms through Portsmouth to Somerset.

Local officials and residents are concerned about Mayflower’s proposal to run underground cables through land in Portsmouth, which could potentially cause traffic issues and impact wetlands and wildlife. Mayflower, meanwhile, insists it cannot continue the cables underwater and north past the Sakonnet River Bridge, citing safety issues.

The session was held in anticipation of Mayflower’s preliminary hearing before the R.I. Energy Facilities Siting Board (EFSB) on Thursday, Aug. 18. Mayflower seeks approval to construct the transmission facilities necessary to connect its offshore wind turbines located 30 miles south of Nantucket to the regional transmission system at Brayton Point. The Aug. 18 meeting, which starts at 9:30 a.m. at the Public Utilities Commission office building in Warwick, will not be open to public comment, although comment will be allowed at later hearings. The town has filed a notice of intervention which reserves its “right to follow up with additional information,” Council President Kevin Aguiar said.

The project area in Rhode Island consists of about 139 acres — more than 135 of which are offshore, undersea land, and about 3.5 acres of onshore land. Mayflower Wind is not seeking EFSB approval for the construction of the offshore wind turbines or the facilities at Brayton Point, as they are located outside of the board’s jurisdiction.

Lawrence H. Mott, transmission development manager for Mayflower Wind, appeared before the council Tuesday along with two other representatives from the wind developer. Mayflower had previously made presentations to the Harbor Commission, Portsmouth Economic Development Committee (PEDC) and the Conservation Commission.

Mott, who said Shell Oil and Ocean Wind are 50/50 partners in the project, stated it would begin with an offshore wind lease area of 127,000 acres, with 149 turbine positions. Energy from the turbines would travel to an offshore HVDC converter station before continuing through underwater cables  to Portsmouth, he said.

“This can power millions of homes,” he said.

There are two points of interconnection: Brayton Point (95 miles away) and Falmouth, Mass. (45 miles), although Mayflower is still working to get approval in Falmouth, Mott said.

“Why are we coming across Aquidneck Island and why aren’t we continuing up the Sakonnet River?” Mott asked during his presentation, anticipating local concerns. One of the biggest issues, he said, is the fact that the debris from the demolition of the old railroad swing bridge under the Sakonnet River Bridge was left in place.

“There’s a risk to consider getting around the debris and ensuring the cables are buried correctly,” he said, adding that Mayflower determined that risk was too high to ensure the longterm safety for the environment, residents, and boaters.

Council member Daniela Abbott said she fully supported renewable energy efforts, but the town needed more information to understand any commitment it may be making. “My understanding is the original plan was to go up the Sakonnet all the way to Brayton Point,” Abbott said, before asking Mott how much money Mayflower was saving by going across land in Portsmouth.

Mott replied that Mayflower always intended on traversing land in Portsmouth, citing the issues with continuing north up the Sakonnet to which he previously referred.

Commenting via Zoom, Joe Forgione, an Aquidneck Avenue resident who said he represents a number of concerned citizens, didn’t buy Mott’s claim about the need to make landfall in Portsmouth.

“You can’t go up the Sakonnet? Yes you can,” said Forgione, noting such crossings have been done numerous times in projects that were faced with similar challenges.

Forgione, who’s also a member of the PEDC, said Mayflower once had an alternate route to come up Narragansett Bay, and under the Newport and Mt. Hope bridges. Only after the Navy objected was that route dropped, he said.

Citing a possibility of an “environmental disaster” due to cables going through shallow water and over protected land, Forgione said Mayflower should instead land its cables in Westport, then continue up Watuppa Pond in Fall River before crossing over to Somerset. “All Massachusetts — the state and area that gets (more than 98 percent) of the benefit,” he said.

He urged the council to form a study committee and hire an independent engineering firm to report on safer and less-disruptive alternatives before the process proceeds.

Ben Furriel, another local resident and an engineer, said it was important to consider alternate routes, such as running the cables “up Narragansett Bay and making a right turn.” He urged the council to put together a timeline of all regulatory decisions points “so we can plan our engagement with the process that allows us time to get involved.” The town needs to “be ahead of any decisions,” he added.

Mott said Mayflower’s proposal is to drill offshore underneath the Island Park Beach, sidewalk and seawall, go under Park Avenue and come out the east side of Boyds Lane. There are four options being considered to bring the cable into Mt. Hope Bay. Currently, Mayflower’s preference is to go up Anthony Road and under the Montaup Country Club, Mott said.

“Horizontal directional drilling” will be used to lessen any impact to the golf course and sensitive environmental resources such as the coastline and beaches, he said. The work shouldn’t attract much attention, although “the drill rig will be noisy,” Mott acknowledged. Answering a question by council member J. Mark Ryan, Mott said the drilling and laying of the cable should take “two seasons,” beginning in 2024.

Mott didn’t have a ready answer when Aguiar asked when Mayflower would know which route it would take once the cables reached Anthony Road. “Sooner rather than later,” Mott answered, saying the project is still early in the process, and that it will depend on regulators, land owners, as well as soil conditions.

Aguiar also got Mott to acknowledge a simple truth: Mayflower isn’t the only wind developer who may seek to run cables in the Sakonnet River or through Portsmouth. Mott said there are a total of seven offshore lease areas in the vicinity of Mayflower’s.

“So it’s possible we could have a separate entity and a separate proposal some time in the future. That’s just something we should be aware of as we go through this process,” Aguiar said. “If Portsmouth is a viable location, I get concerned about another entity wanting to do what you’re doing.”

Council member Keith Hamilton expressed concerns over the cable route’s potential impact on the gas and water pipelines located in the Sakonnet River. “One is the single and only gas pipeline that feeds this island, and we had issues with it five to six years ago,” Hamilton said, referring to a natural gas outage which led to National Grid installing a controversial backup facility in a residential area on Old Mill Lane.

Hamilton said he was worried about any potential damage to the gas or water lines due to construction of Mayflower’s cables. “To me, this island need a secondary pipeline of natural gas on the northern end. Natural gas is not going away,” he said. “My first feeling is to request you don’t (proceed) until that secondary gas line is put in.”

Council Vice President Linda Ujifusa said one of her main concerns is whether Mayflower’s project will further impact sea level rise and climate change. The fact that Shell Oil is a major partner is also troublesome, Ujifusa said, noting she’s heard that “Shell is not a good environmental partner, that they’re greenwashing their environmental efforts.”

Mott later said that Shell is simply one of the project sponsors. “We’re locally administered and locally branded,” he said.