To celebrate more than 40 years of friendship, longtime Barrington residents Mai Donohue and Julia Califano have recently published the cookbook of Vietnamese recipes they began compiling more than … 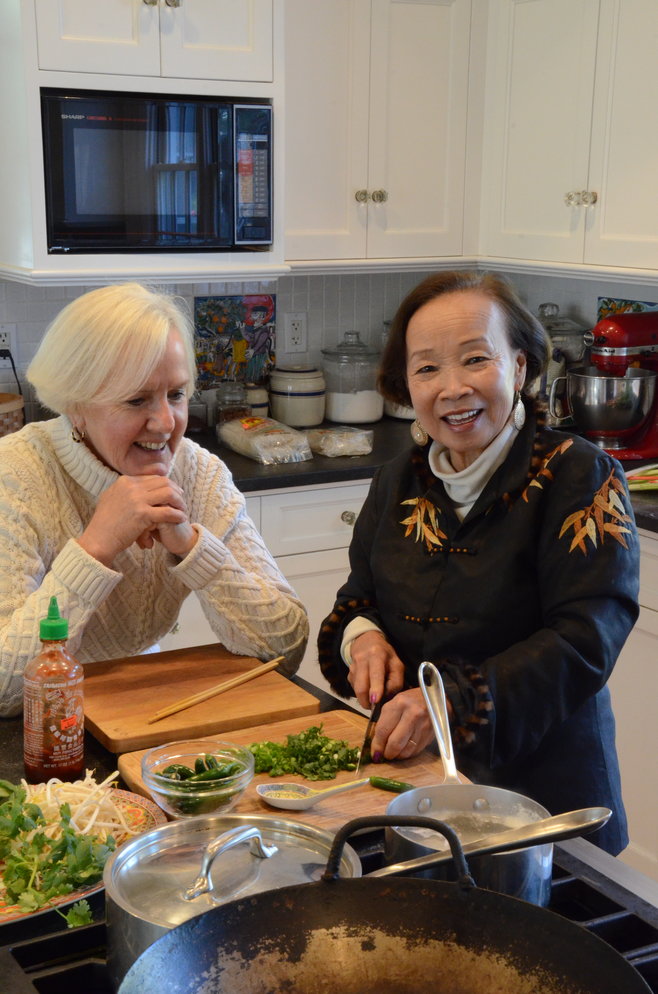 To celebrate more than 40 years of friendship, longtime Barrington residents Mai Donohue and Julia Califano have recently published the cookbook of Vietnamese recipes they began compiling more than 25 years ago. The book is titled “Mai Goodness.”

“When Mai first invited me to lunch at her home, I was not surprised by her hospitality but I was by the vibrancy of her Vietnamese cooking, with its combination of fruits and vegetables, sweet and sour, smooth and crunchy,” Califano said, “and when she told me that she cooked from memory and had nothing written down, I offered to cook with her for the next few weeks and write down the recipes. Those few weeks turned into months and then years, since we wanted to ensure that Mai’s seven children would know something of their mother’s rich heritage.”

Mai was born in 1944 during the time of the Viet Minh campaign for independence from French colonial rule in Vietnam. She was the third of four children of a prosperous landowner in Thong an Ninh, a rural hamlet in the Vietnamese central highlands, and because her family practiced Cao Dai, a religion based on a combination of Buddhist, Christian, Tao, Confucian and Islamic teachings, the Viet Minh assumed that the family was sympathetic to the French and murdered Mai’s grandfather, father and uncles when Mai was still a toddler.

After the French were defeated in 1954, Vietnam was partitioned into the South and North at the 17th parallel, and the Viet Cong resumed the fight for independence, this time against a coalition of anti-communist nations. Mai’s village was near the 17th parallel, and although anti-communist South Vietnam controlled her village by day, the Viet Cong infiltrated at night. Mai’s older brother joined the South Vietnamese Army, but her younger brother joined the Viet Cong, and Mai’s mother was left to manage the family farm with her two daughters.

Mai only attended school in Vietnam through fourth grade before being needed to help with cooking and child care on the family farm, and she quickly learned to prepare simple but tasty meals with the rice, fish sauce, fruits and vegetables readily available in her courtyard.

Married at 13 and a mother at 15, Mai eventually ran away from an abusive home and disappeared into the streets of Saigon where she became a cook and companion to the second wife of a wealthy and powerful Vietnamese businessman. With no children of her own, Mai’s employer and companion introduced her to the Catholic faith and the more sophisticated life and cuisine of the city, with its French and Chinese influences.

When Mai joined a group of friends at a nightclub in Saigon one evening, she met Brian Donohue, a U.S. Naval officer, and was captivated by his beautiful smile. Brian’s tour of duty, however, was about to end, but when he returned to the United States he volunteered for a second tour in order to be reunited with Mai. During that second tour in 1969, Mai and Brian got married.

When Mai first arrived in the United States, she found everything oversized: big roads, big cars, big stores and big people, but despite her diminutive size and language difficulties, Mai was determined to become Americanized, learn to drive a car and cook steaks, hamburgers and hotdogs for her six American children. When the Donohues took in four, young Vietnamese boys in 1975, however, Mai returned to Vietnamese cooking to welcome the boys into their new home, and soon her American children were asking for cha gios and banh bao, pho and banh hoi to celebrate their special occasions.

When the youngest of Mai’s children left for college, Mai decided to finish her own, interrupted education and enrolled in the Community College of Rhode Island and then the University of Rhode Island. While studying, Mai continued to do what she did best: gather friends and family together to cook and tell stories, and after graduating with a degree in communications, Mai invited her friends and family to help celebrate the occasion over nuoc cham, cha gios, chicken and papaya salad.

Vietnam is well-known for its street food, cha gios and banh bao and soups hearty enough to eat for breakfast, lunch and dinner. The most famous of the Vietnamese soups is called pho, which is a clear, hot broth made with beef or chicken, seasoned with fish sauce and poured over rice noodles, raw beef, bean sprouts and scallions, spiced up with hot sauce and garnished with a slice of lime and cilantro.

As well as traditional Chinese wontons and eggrolls, the Vietnamese serve both fresh (goi cuon) and fried (cha gio) spring rolls filled with soy noodles, a combination of shredded shrimp and pork and onions. The Vietnamese sandwiches, banh mi, are a combination of crunchy and spicy (pickled vegetables), sweet and smooth (marinated chicken and dressings).

For special occasions, Mai likes to prepare an elegant platter of Peking duck, stuffed sea bass, papaya salad or deep-fried Cornish game hens, a recipe she discovered while reading a romance novel in her mother’s kitchen.

Although the list of ingredients in Vietnamese cooking may seem intimidating at first, most Vietnamese dishes are a combination of chopped fresh ingredients, noodles or rice and a quick stir fry, so most of the preparation can be done well ahead.