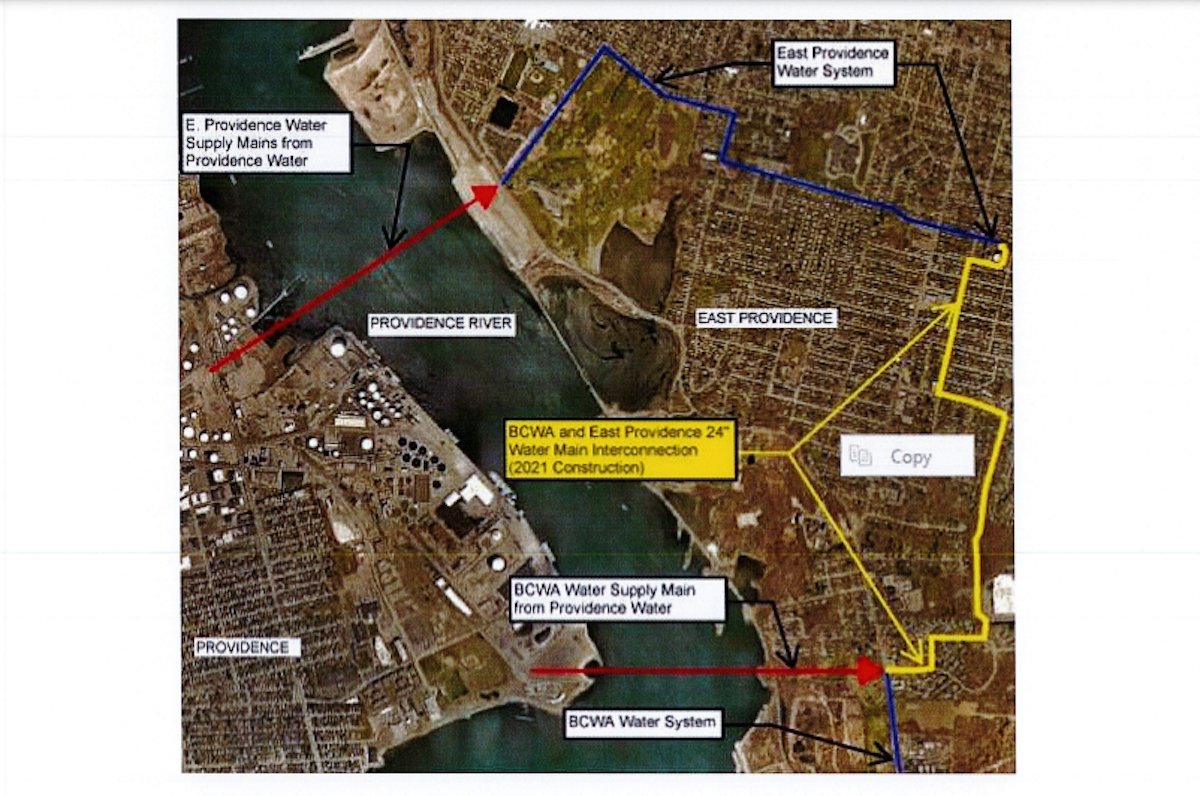 EAST PROVIDENCE — The Bristol County Water Authority (BCWA) and the City of East Providence jointly announced the pipeline interconnection between the two systems has been completed and activated.

The $6.9 million project, which consists of 1.5 miles of 24-inch pipeline links the BCWA East Bay Pipeline with the East Providence water system at the Kent Heights water storage facilities, took approximately 16 months to finish. The interconnection provides an emergency water supply from Providence Water to either utility.

The endeavor began in earnest in the spring of 2021 at the BCWA cross-river pipe located in East Providence on Pawtucket Avenue near the Silver Spring Golf Course.

Pipe was laid from that point north to Wampanoag Trail then to Dover Avenue until it reached East Providence's Kent Heights water facility. Much of the work during the 2022 calendar was spent on the Kent Heights grounds making final connections.

“This interconnection is a significant milestone as it provides greater water security for both Bristol County Water and the City of East Providence,” said Stephen Coutu, P.E., Executive Director and Chief Engineer for BCWA. “We wish to thank the Mayor and his staff for their support and cooperation as well as the residents and businesses that were along the project route for their patience and understanding during construction of this critical infrastructure project.”

The completion of the project establishes a backup water supply for both BCWA and the City of East Providence. If something should happen to either utility’s pipeline, both will still be able to provide safe, reliable water to its customers.

“Our administration took the safety and security of our residents’ access to water very seriously,” East Providence Mayor Bob DaSilva said. “This project had been tabled by previous councils and administrations – but we took action. We sat with the Bristol County Water Authority and moved this project forward so that our residents can have continued, reliable access to water.”

BCWA completely funded the $6,909,780 project with East Providence providing support and assistance with traffic control during construction. The construction work was performed by CB Utilities of Bristol and the design engineering firm was Beta Group from Lincoln.

The new interconnection comes after BCWA experienced two leaks in April 2019 in its East Bay Pipeline. The leaks were unexpected and took more than six months to identify, access and repair. During that time, an existing East Providence interconnection was used selectively with activated water restrictions, as it was not able to supply enough water to support both utilities’ full distribution needs.

The new water main and interconnection will be able to provide a greater backup supply of water if such a need should arise in the future for either utility.

Additionally, East Providence will now be able to move forward with its long-anticipated inspection of its water transmission main from Providence that was installed in the 1960s. The inspection work is tentatively scheduled to take place in late July-early August.

In addition, both BCWA and East Providence continue to work cooperatively in the long-term objective of securing a redundant source of supply with a pipeline connection to Pawtucket Water. They recently agreed to share in the cost of the design of that project which is currently in progress.

While the pipeline interconnection is complete and active, final paving of the impacted roadways in East Providence remains to be completed. Those streets will be milled and paved curb to curb and are scheduled to be completed this summer.